20 Biggest Health Scares on the Planet

Discover the truth behind the headlines.

Although most of us hadn't heard of the coronavirus before this month, the media coverage probably seemed familiar. It's the latest public health scare that has captured worldwide attention, bringing questions, predictions and anxiety—much like bird flu and mad cow disease before it. We looked back at the biggest health scares of all time. Some were devastating, some were hype or outright hoaxes. Some just faded away; others changed medicine and public health forever.

In addition to coronavirus, swine flu (H1N1) has proved problematic in 2020, with 56 deaths reported in Taiwan as of Feb. 3. The disease, which originated in pigs, has caused two pandemics: In 2009, when as many as 575,000 people died of the illness worldwide; and in 1919, the Spanish flu pandemic, which claimed the lives of twice as many.

Avian influenza, also known as "bird flu," caused global alarm in 2003, when a virologist warned the world was "teetering on the edge of a pandemic that could kill a large fraction of the human population." The culprit: the H5N1 virus, which infects birds and can spread to humans. Since then, there have been several small outbreaks that have been contained and several H5N1 vaccines have been developed (although researchers warn they're of limited use because the virus has a tendency to mutate). 6254a4d1642c605c54bf1cab17d50f1e

One of the deadliest pandemics in history was the Spanish flu outbreak of 1918-1920, in which it's estimated that 500 million people were infected around the globe, and 10 to 20 percent of victims died. A quirk of this outbreak is that younger people were hardest hit; the virus had a tendency to make stronger immune systems go into overdrive, producing potentially fatal breathing problems. While today the elderly are most vulnerable to flu complications, in 1918, 99% of people who died from the flu were under age 65.

Also caused by a coronavirus, SARS (severe acute respiratory syndrome) caused a global panic when it broke out in China in 2002. The highly contagious, potentially fatal form of pneumonia was caused by an animal virus that mutated and jumped to humans. It was fatal in about 10 percent of cases. Luckily, two outbreaks were contained fairly quickly, and there have been no reported cases of SARS since 2004.

In late summer 1976, disease experts were stumped when dozens of people who had attended an American Legion convention at a Philadelphia hotel reported serious respiratory problems and pneumonia; some died of heart attacks within days of the convention's end. Scientists identified the previously unknown bacterium Legionella pneumophila as the culprit in 1977, by which time 182 people had been sickened and 29 died. The bacteria had contaminated water cooling tanks in the hotel's air conditioning system and had become airborne. The disease might seem like a '70s relic, but Legionnaires' outbreaks continue to periodically happen. Most recently, four people died in 2019 after being exposed to the bacteria at a hot tub display in a North Carolina state fair.

A week after the 9/11 terror attacks, envelopes were mailed to several media organizations and two senators that were found to be contaminated with Bacillus anthracis, a.k.a. anthrax, a bacteria that can cause respiratory failure if inhaled or absorbed through the skin. Five people died and 11 others were sickened. The FBI investigation concluded in 2010 that a former Army biodefense expert had mailed the contaminated envelopes; he had committed suicide two years earlier after becoming a suspect. 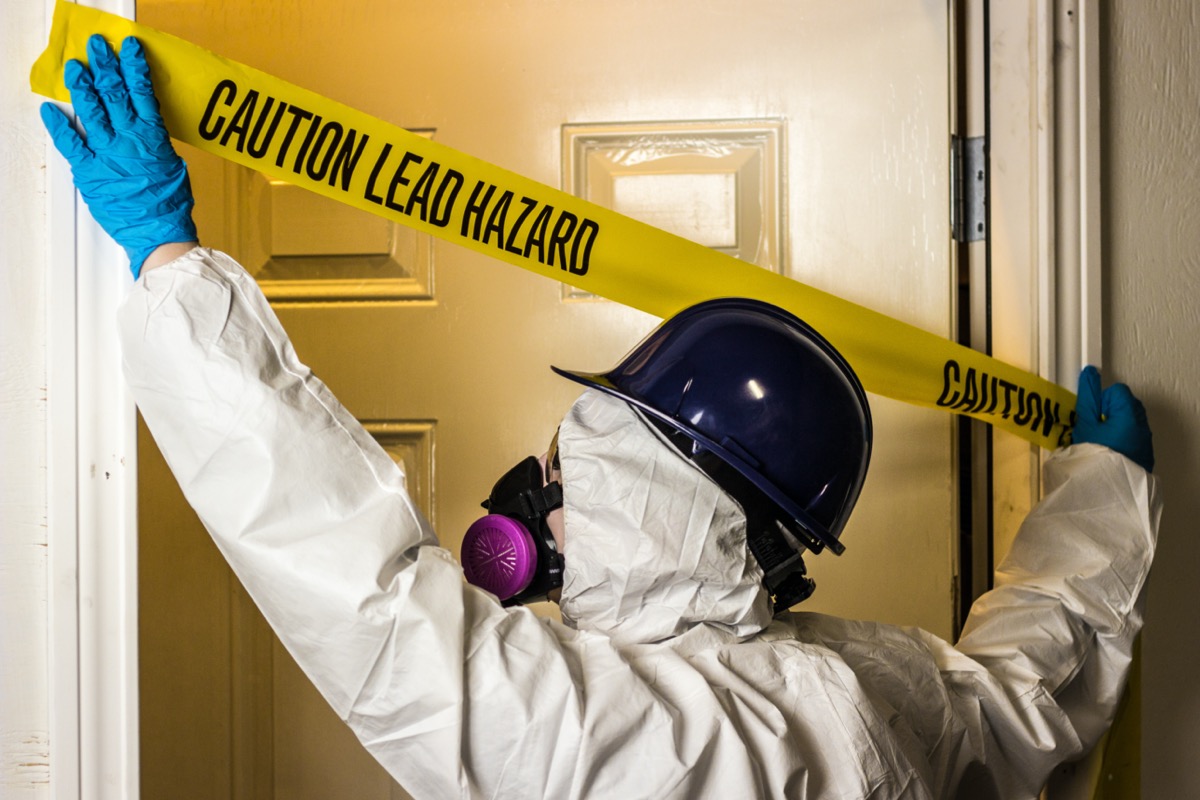 Lead was once a common ingredient in house paint that was used to increase the durability of the coating. Unfortunately, in the 1950s, researchers discovered that exposure to lead—via chipped paint, toys, and leaded gasoline—paint could harm children's brains and cause developmental disorders. States began to ban lead paint, but it wasn't until 1978 that a full federal ban was enacted. By then, tens of millions of children had been affected—"the longest-lasting childhood health epidemic in U.S. history" concluded CityLab in 2016. Lead is still so ubiquitous that experts estimate it would cost $1 trillion to eliminate it in the U.S.

The emergence of AIDS in 1981 caused a health scare like no other: Here was a disease that could cause total immune system collapse, with no known cause. By the time the HIV virus was isolated in 1983, 2,304 Americans had died of HIV/AIDS complications and the Health & Human Services Secretary predicted a vaccine within two years. That didn't happen. By 1995, when the first universally effective drug treatment for HIV was introduced, 20 million people were infected worldwide.

In the 1980s, fear spread after news reports claimed that cancer clusters had been found among people who lived near power lines and that electromagnetic fields (EMFs) from the lines could be carcinogenic. Today, some scientists remain convinced of the threat, but several studies have found no association. Most notably, in 1996 a committee at the National Academy of Sciences said there was no persuasive evidence that power lines increase the risk of cancer.

By the turn of the last century, plastics had become a constant presence in American life—plastic water bottles, cups and microwave containers touched Americans' mouths, food or drink on an almost hourly basis. So alarms rang when studies suggested that bisphenol A (BPA), a common additive to plastic, could enter the body and act as an endocrine disruptor, causing health problems like infertility, ADHD, obesity, heart disease and cancer. Consumer fears forced manufacturers to launch and tout BPA-free products, although the science isn't quite conclusive. In 2014, the FDA concluded that plastic products with BPA weren't making people sick and are safe in the levels encountered by consumers.

Can cell phones cause brain tumors? It's been a common worry ever since cell use became widespread. Cell phones produce radiofrequency radiation to send and receive calls and texts, and some feared that holding phones to the ear may be risky. But not all radiation is the same: RF radiation is very weak, and according to the American Cancer Society, several large studies have found no connection between cell phone use and cancer.

Burgers, hot dogs, bacon, deli meats—all staples of the American diet, all under a cloud of suspicion. In 2015, the World Health Organization classified processed meat as a Group 1 carcinogen (known to cause cancer). Processed meat is meat that's smoked or salted when it's prepared; many contain nitrates, a preservative that scientists believe can increase the risk of colon or stomach cancer. The news scared some people toward more plant-based eating, but not many: According to a 2019 study published in the Journal of the Academy of Nutrition and Dietetics, Americans eat as much processed meat as they did 18 years ago.

In 1998, a research team led by British scientist Andrew Wakefield published a study in The Lancet alleging that the measles-mumps-rubella vaccine could be linked to autism. That kicked off the modern anti-vaccination movement, which is going strong on social media today—even though several studies refuted the Lancet study, and Wakefield was found to have committed scientific fraud, altering facts to support his hypothesis.

One of the first online conspiracy theories, an email circulated in 1998 claimed that aspartame (Nutrasweet), a popular artificial sweetener, could cause medical conditions like multiple sclerosis, lupus, seizures, depression and memory loss. It gained traction although there was no scientific evidence to support those claims. Several studies have found that aspartame is safe to consume.

The polio scare of the 1950s was one of the first health scares covered by mass media, including then-new television. The result: "Fewer than sixty thousand new cases of polio per year created a near-panic among American parents and a national mobilization that led to vaccination campaigns that virtually wiped out the disease within a decade," write the authors of Lead Wars. Polio was once one of the most-feared diseases in the country; within 25 years of the introduction of a vaccine in 1955, it was eradicated in the United States.

Hormone replacement therapy was once a standard treatment for women going through menopause, to alleviate symptoms and improve quality of life. Doctors believed it had health benefits—until, beginning in the '90s, studies suggested HRT could raise the risk of cancer. Today, "well-conducted studies have led many doctors to conclude that the risks of MHT often outweigh the benefits," the American Cancer Society says.

In fall 1982, the nation panicked when seven people died after taking cyanide-laced Tylenol capsules purchased at Chicago-area drugstores. Thirty-one million Tylenol products were pulled from shelves, and the media coverage was so overwhelming that experts predicted the brand would not survive. But Tylenol reintroduced its products with tamper-resistant packaging, including foil seals; other brands followed suit, and Tylenol sales rebounded within a year. By 1989, the FDA published guidelines to ensure all over-the-counter drugs were tamper-proof. The person responsible for the Tylenol poisonings has never been found.

It had the makings of a horror movie no one had thought of, somehow: Bovine spongiform encephalopathy, (a.k.a. mad cow disease), a neurodegenerative disease in cattle that causes deterioration of the brain, devastated the British meat industry in the late '80s and early '90s when it was discovered that eating infected meat could cause a variant of the disease in humans. UK meat exports were banned, and by the late 2010s, the disease had mostly been eradicated.

DDT was once a ubiquitous ingredient in insect repellants and pesticides because it was exceptionally good at killing bugs. It was also extremely toxic to humans and animals. By the early '60s, research had found it could disrupt human hormones, causing premature birth and low birth weight. It drove the bald eagle to the brink of extinction, poisoning the fish it fed on and making its eggshells so thin they were invisible. A public outcry led to DDT being banned in the U.S. by 1972.

In the 1950s, the idea that prescription medications could be bad for you basically didn't exist. The introduction of every new drug was hailed as an advancement for human health. Until thalidomide. Beginning in the late '50s, the sedative was prescribed to pregnant mothers in Europe as a remedy for morning sickness. Drug companies campaigned to bring thalidomide to the U.S. until 1961, when it became apparent that the drug was causing severe birth defects, and it was withdrawn. Thalidomide was kept out of American medicine cabinets by a reviewer for the FDA, Frances Kelsey, who repeatedly rejected the drug while questioning studies that showed its apparent safety. Kelsey was awarded the presidential medal for civilian service, and her vigilance led to more stringent procedures for the approval of new drugs.

And to live your happiest and healthiest life, don't miss these 100 Ways Your Home Could Be Making You Sick.