From breakthroughs to breakdowns, here’s the news you can use.

The last year was like a whirlwind—and in today's 24-hour news cycle, it can be really hard to focus on what's important (and ignore what's just hype). From medical breakthroughs to major epidemics, a lot happened in 2019 that could impact your health. Here are the top ten health headlines from the year.

The biggest health story of the year is vaping, without a doubt. The number of vaping-related illnesses across the country has reached epidemic levels: The CDC reported 2,172 cases of lung injury due to vaping, and 42 deaths in 24 states. Emergency rooms are seeing a spike in the number of patients who arrive gasping for air and coughing, with high fevers and gastrointestinal distress. Most are men in their 20s and 30s, and some are left with irreversible lung damage. One patient—a previously healthy 17-year-old boy from Michigan—had so much scarring on his lungs that he needed new ones to survive.

The CDC made a breakthrough in November, saying they had discovered vitamin E acetate in lung fluid samples of all the patients who submitted for testing. The synthetic oil is used as a cutting agent in vaping products containing THC, but it's likely not the only cause—patients who use nicotine and cannabis vapes reported lung injuries. Meanwhile, federal restrictions designed to curb teenage vaping remain a political football, ensuring this issue will make headlines for the year to come.

RELATED: 50 Unhealthiest Habits on the Planet

Vaccine hesitancy—the refusal or reluctance to get vaccinated—was named a top ten threat to global health by the World Health Organization in 2019. Despite the fact that vaccines are readily available and known to be highly effective in avoiding disease (it currently prevent 2-3 million deaths every year) people are choosing not to vaccinate for a variety of reasons. Vaccine hesitancy is implicated in the 30% increase of measles globally. It's not the only reason for the resurgence, but some countries that were close to eradicating the disease are now seeing a comeback.

RELATED: When Not to Get Your Flu Shot

The measles was thought to be a thing of the past—until early 2019. The United States had a record-setting number of measles cases this year, with 1,261 reported cases to date. That's in comparison to just 86 patients diagnosed three years ago. Measles is a highly contagious respiratory disease, spreading through the air in infected droplets when a patient coughs or sneezes. Measles starts with high fevers, a cough and runny eyes, then becomes a rash that spreads to the entire body. It can cause severe complications, including encephalitis, pneumonia and death.

According to the CDC, it's so contagious that 9 out of 10 people who come in contact with the virus will become infected if they are not protected. The majority of those who caught measles were not vaccinated. The best way to protect yourself and your children is a combination vaccine for measles, mumps and rubella (MMR). It has been proven very safe and effective and does not cause autism, despite the protests by the "vaccine hesitancy" movement.

Google knows a lot about you—maybe more than you realize. In late 2019, the Wall Street Journal reported that Google was engaged with one of the nation's biggest health-care systems, Ascension, on a project to make medical AI smarter. Google had secretly harvested tens of millions of medical records—patient names, lab results, diagnoses, hospitalization records—from more than 2,600 hospitals as part of a machine-learning project code-named "Nightingale."

Neither the affected patients nor the Ascension doctors were made aware their data was being shared. The Department of Health and Human Services is investigating the legality of the partnership. Under HIPAA, the package of regulations that protects patient data, "Nightingale" appears to be legal, but it was signed into law decades before Google could accurately predict if you were pregnant based on your search habits. The fallout from this decision could be wide-reaching in the digital age.

Is it possible you could be vaccinated against breast cancer? Yes, according to researchers at the Mayo Clinic. In March, they reported a cancer vaccine could be on the market within eight years—and it may not only stop the recurrence of ovarian and breast cancers, but prevent them in the first place. The vaccine works by stimulating the body's immune system to kill cancer cells. Mayo Clinic's vaccine focuses on the HER2 protein, which occurs naturally in the body, but breast cancer cells make too much of it. Researchers are hopeful the vaccine will train the immune system to see the overabundance of these proteins as foreign and kill them. Research is still in the early stages for this vaccine, so don't run to the doctor's office just yet. The first step would be to test it in high-risk patients who had cancer already with the hopes of preventing a recurrence, and then it would move into clinical trials.

The furor over marijuana is heating up. To date, 33 states and the District of Columbia have passed laws that broadly legalize marijuana in some form. Dispensaries and special smoke shops will open their doors in Illinois next, after the state voted to legalize recreational pot. Other states allow for more limited use of medical marijuana under certain circumstances. Proponents of legalized marijuana point to health benefits like pain management and seizure control, and the ability of states to collect taxes on marijuana sales from regulated dispensaries. And, regulating the production of cannabis products could make them safer—most of the lung injuries in the vaping epidemic have been linked to THC vapes.

A new hope for people suffering from cystic fibrosis—in October, the FDA approved a new treatment that could prove a highly effective therapy for 90% of patients. Cystic fibrosis is a rare disease that damages the lungs and digestive system. The body produces thick mucus that clogs the lungs and makes it hard to breathe. The condition has no cure, but the new combination drug Trikafta targets the cystic fibrosis transmembrane conductance regulator (CFTR) gene, which is present in an estimated 9 out of 10 patients. 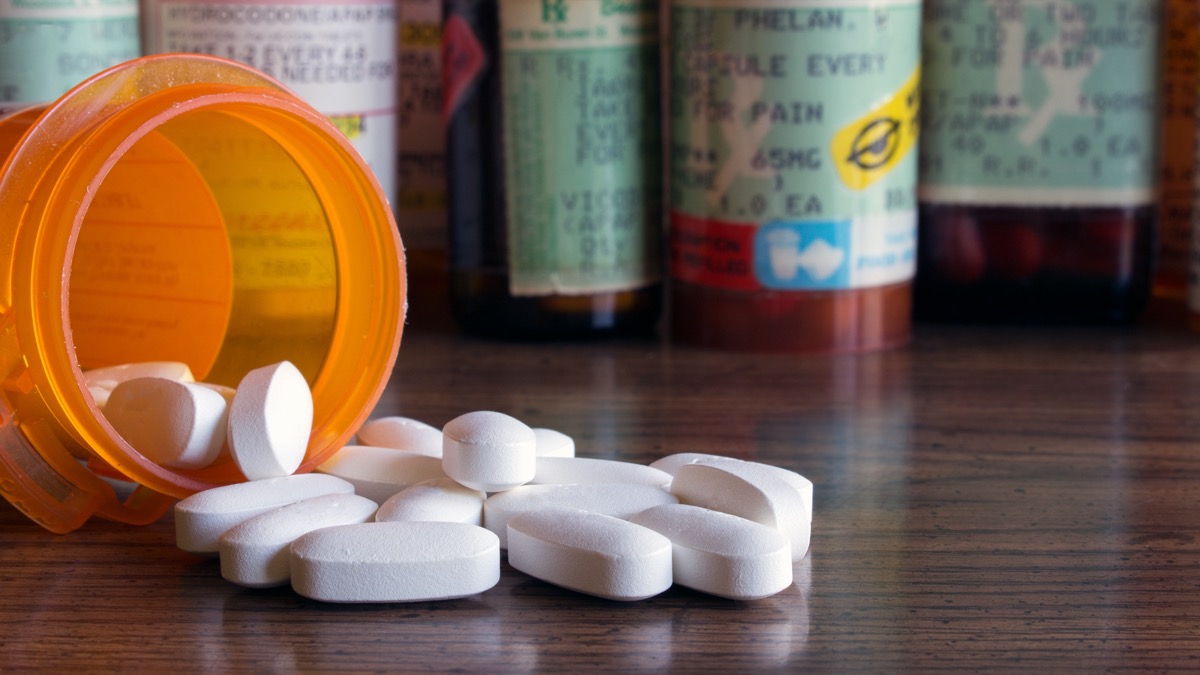 Drug overdose deaths continue to rise in the U.S., according to the CDC. Prescription opioids are often the first step in the path to addiction—and between 1999-2017, nearly 400,000 people died from an opioid overdose, making it a leading cause of accidental death. Opioids are typically prescribed as painkillers, and they are highly addictive. These medications bind to the areas of the brain that control emotions and pain, increasing levels of dopamine to produce feelings of euphoria. As the brain grows accustomed to these feelings, it takes more and more of the drug to create the same level of pain relief and happiness, leading to dependence.

When prescription drugs become too hard to obtain, people turn to heroin as a cheaper alternative. And in 2019, states began taking pharma to trial. In a landmark decision, an Oklahoma judge ordered Johnson & Johnson to pay $465 million for its role in the state's devastating opioid crisis, stating the company is liable for overly aggressive and deceptive marketing that led to thousands of overdose deaths.

The Food and Drug Administration identified a possible link between breast implants and anaplastic large cell lymphoma (BIA-ALCL), a rare cancer of the immune system. Common symptoms include swelling, pain, a lump in the breast or armpit, skin rash, or hardening of the breast. In July 2019, the FDA requested a recall of Allergan BIOCELL textured breast implants.

Women with breast implants that have textured surfaces are at greater risk for developing this cancer. The FDA analyzed 573 reported cases of the cancer, including 33 deaths, and found that 471 of the patients had Allergan breast implants at the time they were diagnosed. That being said, the FDA stopped short of recommending people have their breast implants removed, since that procedure can have serious complications as well. The agency says all patients with implants should closely monitor for changes in the look and feel around their breasts, and speak with a health care professional with any concerns.

The number of children and teens with at least one treatable mental health disorder is on the rise, according to a 2019 study published in JAMA Pediatrics. But the more troubling thing is half of these kids did not get the treatment they needed from a mental health professional. Researchers pointed to lack of medical access to and parental reluctance in seeking mental health treatment. In Michigan, for example, half of all counties in the state don't have any child psychiatrists.

At the same time, mental health professionals report seeing more children who experience trauma from exposure to adult substance abuse, growing up in poverty, domestic violence and other issues. Another study found a sharp increase in the number of kids coming to ER because of mental health crises—a 28% uptick over five years. Only 16% of these kids reported having seen a mental health professional before going to the ER. It's time to stop stigmatizing mental health. You'd go to the doctor for a broken bone, right? Go to the doctor for help with mental disorders, too. And to live your happiest and healthiest life, don't miss these 30 Health Mistakes You Don't Know You Are Making.