Health Fads That Everyone From the 1980s Will Remember

These fads went viral before the internet.

Ah, the '80s—that era when the hair was big and the waistlines were small. It's not your imagination that people were slimmer back then: Until the mid-'80s, the number of Americans who were obese or overweight declined, before those rates began a steady climb that has resulted in record levels today. It was also an era of super-popular health fads that went viral without benefit of the internet. Some of them have since been disproven by science, while others have been validated and are worth a revisit. Read on to find out more—and to ensure your health and the health of others, don't miss these Sure Signs You've Already Had COVID.

In the '80s, dietary fat was less popular than Sen. Ted Cruz—it was believed that consuming any amount of fat via food led to developing body fat. Health experts advised Americans to avoid all dietary sources of fat. A low-fat food industry boomed, larding an array of products with sugar to add savor. Four decades later, obesity in the U.S. is at its highest level ever. This is not a coincidence. In the interim, scientists have learned that products containing added sugar just make us want to consume more calories, while only some fats are harmful (like trans fats); others are healthful, contributing to satiety and consuming fewer calories overall—the key to maintaining a healthy weight or losing weight if necessary.

Ever wonder why everyone in those photos from the early '80s looks so skinny? Remember this was the era when 20 Minute Workout, Jane Fonda's videos, Joanie Greggains' records, and movies like Perfect ruled pop culture. They were all dedicated to aerobic exercise, which modern doctors and health experts would translate to the universal prescription called "moving more." Today, more of us are more sedentary than ever, which raises the risk of a cascade of chronic illnesses, from obesity to heart disease and cancer to mental illness and dementia. Scoff at that Polaroid of Mom in leg warmers at your own peril.

RELATED: Health Habits That Are Aging Your Body

Debuting just outside of the '80s—but everyone who was around in the '80s will remember it, so so sue us—the Thighmaster was a 1-900 fitness revolution. Everybody bought one. In that era, the Thighmaster and hit fitness videos targeted to "buns" and abs pushed the mythology—or at least didn't correct the widely held belief—that you can spot-reduce fat. You can't. Today, we know that to shape up optimally, it's most effective to prioritize full-body strength training and calorie-torching cardio.

RELATED: 5 Signs You Have Visceral Fat Besides a Big Belly 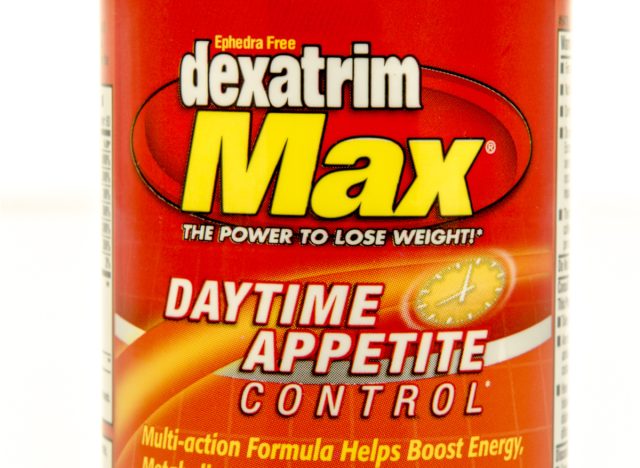 Weight-loss pills like Dexatrim were available over the counter—and advertised relentlessly over the airwaves—in the '80s. Many of these pills contained harmful stimulants and stimulant-like substances such as PPA and ephedra, which studies connected to heart attacks and strokes. Some of these supplements disappeared from the market; others re-emerged in "new formulations" omitting the dangerous substances and adding warnings that their potential effects hadn't been observed by the FDA.

RELATED: What Happens to Your Body When You Smoke Weed, Says Science

In the '80s, popular diets focused on bizarre routines dedicated to cutting as many calories as possible: The cabbage soup diet, the liquid protein diet, the grapefruit diet, and many other amateur variations that were just a checkout-magazine-targeted spin on starvation. Although it's true that eating fewer calories than you burn is an effective method of weight loss, today we know that the metabolism adapts to extremely low-calorie diets, making the body hang on to fat. Plus, they can be dangerous: Several acolytes of the liquid protein diet died of heart attacks, because their routines included few other essential nutrients. And to get through this pandemic at your healthiest, don't miss these 35 Places You're Most Likely to Catch COVID.6254a4d1642c605c54bf1cab17d50f1e