Heart attack can happen at any age—here are five warning signs.

American Idol star C.J. Harris has died at 31 after suffering an "apparent heart attack" on January 15 at his home in Jasper, Alabama. The singer was reportedly rushed to Walker Baptist Medical Center, and passed away soon after. Harris is famous for placing sixth on the show's 13th season in 2014, singing in front of judges Keith Urban, Jennifer Lopez and Harry Connick Jr. in Salt Lake City. "Your talent and smile will be missed, and the world is definitely a darker and eerily quieter place without you in it," says Jessica Meuse, another season 13 alumni. "I'll miss your random phone calls asking for life advice and talking about the music world… There are a lot of things I realize I will never understand — you leaving us so soon is one of those things."

"During a heart attack — also called an acute myocardial infarction — blood is blocked from flowing to the heart," says Rajat Jhanjee, MD, MSEE, FACP, FACC, FHRS. "As a result, part of the heart muscle can be damaged or killed. Usually, the blockage is caused by a blood clot formed from the buildup of fatty deposits in the heart's arteries."

Heart attack can happen at any age, doctors warn. "There's a few reasons why we're seeing the rise of heart attacks in young people," says cardiologist Luke Laffin, MD. "But one of the biggest risk factors is the increasing incident of type 2 diabetes… We're now seeing heart attacks occurring in young men who are only 25 or 35. Twenty years ago this wasn't the case and was rarely discussed in medical school… When we're talking about young people having heart attacks, it's important to individualize the discussion based on risk factors.It's about having an honest conversation and not pushing things off and saying 'Oh, I'm too young,' especially if you have symptoms."  Here are five symptoms of heart attack, according to experts. 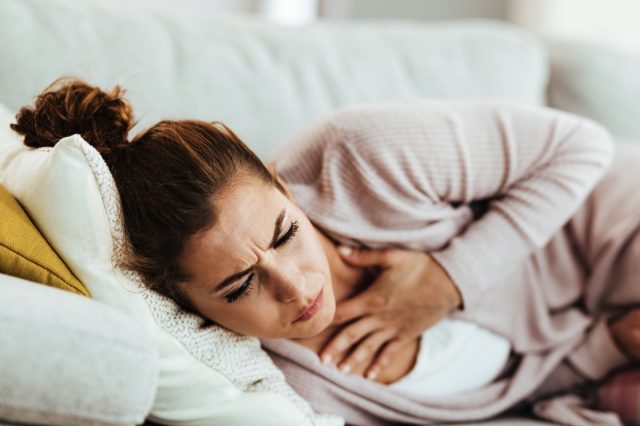 "Heart attack, also known as a myocardial infarction (MI), is the number one cause of death in the US for both men and women," says Jeffrey W Chambers, MD, FACC. "A blockage in one or more arteries that limits or stops blood flow to the heart can lead to a heart attack. Chest pain is one of the most common reasons that people seek emergency care. Identifying the cause of chest pain symptoms can be complex and challenging. If you have sudden chest pain seek medical attention immediately.

"Heart attack pain may start with chest pressure that comes and goes, sometimes with exertion. If the pain becomes continuous, seek medical attention immediately and consider calling 911. If you have chest pain constantly  for several days, weeks or months, it is unlikely to be caused by a heart attack. Typical heart pain is a dull, pressure-like or burning sensation. Some people describe a heart attack as feeling like 'an elephant is sitting on my chest.' It is sometimes associated with shortness of breath. Heart pain may radiate to the left arm or neck. If your pain is on your right side, a heart attack is unlikely. Heart pain is usually not sharp or stabbing. In general, any pain that gets worse with movement is not from the heart. Chest pain that is aching, sharp or stabbing, may be caused by other conditions such as acid reflux or heartburn, pleurisy or joint and muscle pain." 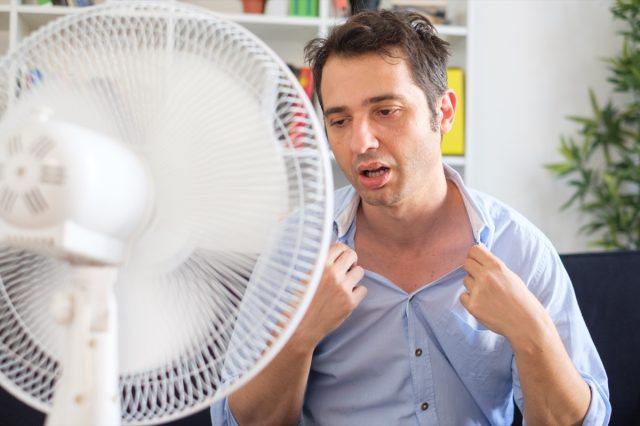 Nausea and cold sweats could be a symptom of heart attack, experts warn. "Waking up in a cold sweat, feeling nauseated, and vomiting may be symptoms of the flu, but they can also be signs of a silent heart attack," says Penn Medicine. "You may know what the flu feels like because you've had one before, but when your gut is telling you that these flu-like symptoms are something more serious, listen. Don't chalk these symptoms up to the flu, stress, or simply feeling under the weather — they may be much more serious than that."

"Cold sweat, where perspiration breaks out for no normal reason, can be a heart attack alarm. Cold sweat clustered with other heart attack symptoms dramatically raises the risk that you are or soon will be suffering a heart attack," according to Charles Patrick Davis, MD, PhD and McLeod Health. "If you experience a cold sweat along with other symptoms – CALL 911 immediately. DO NOT drive yourself. The EMS teams start treating you even before you get to the hospital." 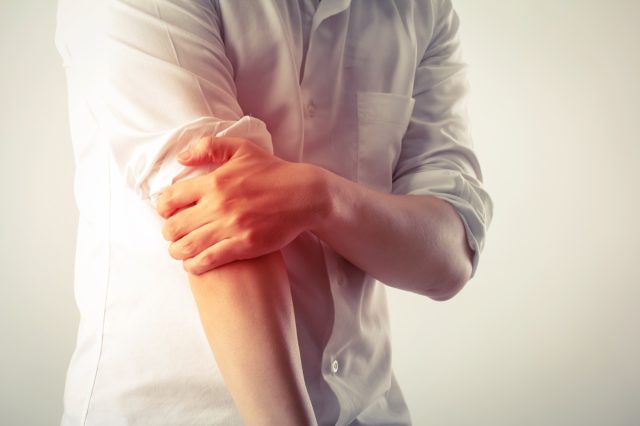 Pain ​​that is concentrated in your left arm could be a sign of heart attack. "This is called referred pain," says cardiologist John Waggoner, MD. "If your heart is damaged, it tells the brain. But the nerves that carry this message from the heart talk to the same part of the brain as the nerves in the arm. Sometimes, the brain mixes up the signals. This means you may feel pain from the heart in your arm.

"Based on advice from the American Heart Association, you should call 911 if your left arm pain gets worse over a brief period, like a few minutes. You should also call 911 if you have arm pain with chest pain or pain in your back, neck, jaw, or lower stomach area." 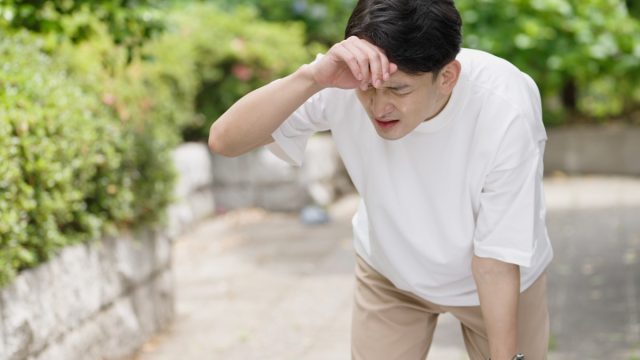 Shortness of breath—especially for women—could be a warning sign of heart attack. "Women are more likely to have shortness of breath and nausea," says cardiologist Lawrence Phillips, MD, assistant professor in the Department of Medicine and medical director of outpatient clinical cardiology at NYU Langone. "Or, they have arm or shoulder pain on both sides. If you have any combination of these symptoms, you should be evaluated by your doctor.

"In some cases patients come in and we discover nothing is wrong," Dr. Phillips says. "They then apologize for 'wasting my time.' But I tell them, 'You did not waste my time. This was the best possible outcome.' Waiting puts you at higher risk for something worse happening, so never hesitate to call your doctor."

Unexplained fatigue could be another sign of heart disease. "We typically recommend that adults get at least seven to eight hours of sleep each night," says Dr. Waggoner. "If you're sleeping that much but are still tired, you should talk to your doctor. It could be a sign of another health issue."6254a4d1642c605c54bf1cab17d50f1e

Fatigue is especially concerning for women. "Women often don't go to the doctor as quickly during a health emergency, like a heart attack," says Dr. Waggoner. "Pay attention to how you feel. Watch for weakness in your arms and legs. Look for changes in your ability to do activities. If you're super tired after small activities like taking a relaxing walk or carrying something, it could be your heart." 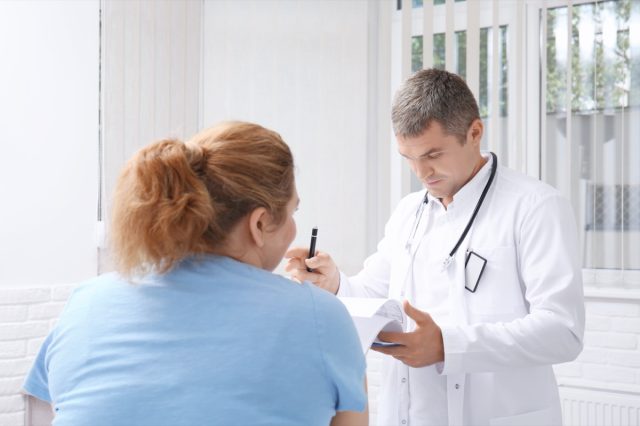 "There also are some specific risk factors that affect only females. Women who have high blood pressure during pregnancy — a condition called preeclampsia — are at increased risk later in life for heart disease. After menopause, when estrogen levels drop, the rate of heart disease in women goes up dramatically."

Ferozan Mast
Ferozan Mast is a science, health and wellness writer with a passion for making science and research-backed information accessible to a general audience. Read more about Ferozan
Filed Under
Heart // News