This Decreases Your Risk of Dementia Considerably, Study Finds

To keep your brain healthy, it's smart to keep doing this.

As if you needed another reason to get up and move more, a new study has found that having an active lifestyle can keep your brain healthy, slowing the progression of Parkinson's disease and genetically influenced dementia. In research published in the journal Neurology, South Korean scientists tracked 173 older adults who had early signs of those disorders; 27% of them had a genetic variant that predisposes people to Alzheimer's disease.

Using cognitive tests given at the beginning of the study, then one and two years later, researchers found that people who were more physically active experienced less gene-related cognitive decline. "Problems with thinking skills and memory can have a negative impact on people's quality of life and ability to function, so it's exciting that increasing physical activity could have the potential to delay or prevent cognitive decline," said study author Jin-Sun Jun, MD, of Hallym University in Seoul, South Korea. Read on to find out more—and to ensure your health and the health of others, don't miss these Sure Signs You May Have Already Had COVID.

What Are Parkinson's and Dementia?

Parkinson's disease is a disorder caused by the death of dopamine-producing cells in the brain. The reason those cells die is not fully understood; scientists think a combination of genetic and environmental factors are responsible. Symptoms include tremor, impaired balance and coordination, limb stiffness, and slowness of movement.

The genesis of dementia—an umbrella term for a decline in memory, judgment and the ability to communicate—is also unclear overall. This study involved people with a variant in the APOE e4 gene, a predisposition for developing dementia.

RELATED: This Trick Can Make You Younger in 8 Weeks, Says Science

Being Active Decreases Your Risk of Dementia

Previous studies have found that staying active may delay dementia. In 2012, research published in the Journal of Alzheimer's Disease found that in older adults, an active lifestyle—defined as participation in mental, physical, or social activity—delayed dementia onset by an average of 17 months. The researchers found that people who undertook more of the three types of activity experienced a greater delay in dementia onset than those who participated in less.

How to Stay Active

Although experts aren't sure why activity keeps your brain healthy, their message is clear: Use your cognition or lose it. "Formal education in any stage of life will help reduce your risk of cognitive decline and dementia," the Alzheimer's Association advises. "For example, take a class at a local college, community center or online." Even less formal ways of challenging your mind—such as doing puzzles or playing games—are brain-protective.

Additionally, "Staying socially engaged may support brain health," the Alzheimer's Association says. "Pursue social activities that are meaningful to you. Find ways to be part of your local community — if you love animals, consider volunteering at a local shelter. If you enjoy singing, join a local choir or help at an after-school program. Or, just share activities with friends and family."

Also helpful: Maintaining a healthy weight and blood pressure, getting enough quality sleep, and engaging in regular cardiovascular exercise. Read on to learn about some early signs of dementia and what to do if you notice any of them.

RELATED: 7 Things That Age Your Face, According to Science

If you "struggle to remember recent events, although you can easily recall things that happened in the past," that's an early signal of dementia, according to the Alzheimer's Society. Think of Maria Turner. She may have remembered something from her childhood but had no memory of buying that minivan.

RELATED: 5 Signs You Have Dementia and Aren't Aging "Normally"

Early Sign of Dementia: Forgetting About Your Monthly Bills 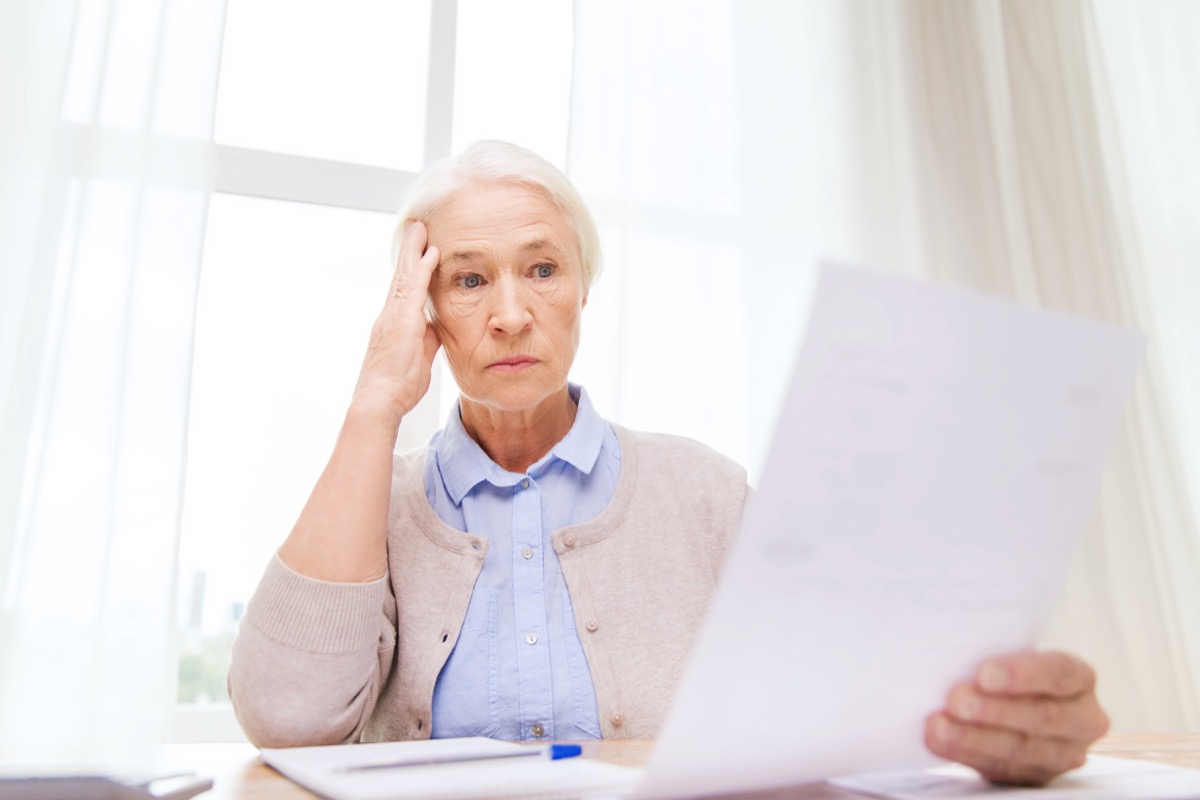 Spending money on purchases you don't remember is one early sign of dementia, but so is not spending money—as in, completely forgetting about your monthly bills. These routine tent poles every week serve as markers those with total cognitive function should be able to remember.

Early Sign of Dementia: Problem With Planning and Preparing Meals

We all find ourselves with a fridge full of rotten leftovers once in a while, or some spoiled spinach in the crisper drawer. But if you're shopping for meal prep and forget you even bought the groceries, or what meal you planned to make, shortly after, then it may be a sign of cognitive decline. Forgetting to eat is also a worrying sign.

RELATED: Here's What Happens to Your Liver When You Drink Alcohol

Ghosting those you're supposed to meet isn't just rude; it can be a sign of dementia, if you don't even remember scheduling the appointments in the first place.

What to Do if You Notice Worrying Signs of Dementia

"Coming to terms with memory loss and the possible onset of dementia can be difficult. Some people try to hide memory problems, and some family members or friends compensate for a person's loss of memory, sometimes without being aware of how much they've adapted to the impairment," says the Mayo Clinic. "Getting a prompt diagnosis is important, even if it's challenging. Identifying a reversible cause of memory impairment enables you to get appropriate treatment. Also, an early diagnosis of mild cognitive impairment, Alzheimer's disease or a related disorder is beneficial." And to get through this pandemic at your healthiest, don't miss these 35 Places You're Most Likely to Catch COVID.