Early Signs You Have Lung Cancer

An early detection is a key factor when it comes to chances of survival.

By Leah Groth
FACT CHECKED BY Alek Korab
Over the next two decades, the most common cancers in America will change, according to a new report in JAMA Network Open—with lung cancer dropping from second to third most common. As with any type of cancer, early detection is a key factor when it comes to chances of survival. So what are the signs and symptoms to look out for? The most common symptoms of lung cancer, according to the American Cancer Society, are the following. Read on—and to ensure your health and the health of others, don't miss this urgent news: Sure Signs You Have "Long" COVID and May Not Even Know It.
1

A Cough That Does Not Go Away or Gets Worse

"The early symptoms of lung cancer may be a slight cough or shortness of breath, depending on which part of the lung is affected," according to the Cancer Center. "As the cancer develops, these symptoms may become more severe or intense. Like many other types of cancer, lung cancer may also cause systemic symptoms, like loss of appetite or general fatigue."

…or rust-colored sputum (spit or phlegm). This can happen with COVID patients, too. "What happens is, airway inflammation sometimes leads to a very fragile lining of the airways, and those small blood vessels, or capillaries, might be affected, causing blood to come out," Dr. Albert Rizzo, the chief medical officer of the American Lung Association, told the Today Show.

This chest pain "is often worse with deep breathing, coughing, or laughing," according to the American Cancer Society.

"If you're living with lung cancer, you may, at times, experience a loss of appetite, as well as difficulty with chewing and swallowing," according to the Roy Castle Lung Cancer Foundation. "This is very common, with up to 9 out 10 people with advanced cancer losing their appetite to some extent. Certain treatments can also have an impact on your appetite."

"What causes shortness of breath with lung cancer?" asks Johns Hopkins. "Sometimes, lung cancer tumors grow in a way that blocks airways, put pressure on lungs or cause inflammation in the respiratory system. All of these situations can prevent your respiratory system from working properly, leading to problems getting in enough air."

RELATED: The #1 Cause of Diabetes, According to Science

….such as bronchitis and pneumonia that don't go away or keep coming back," says the American Cancer Society, can be signs of lung cancer. 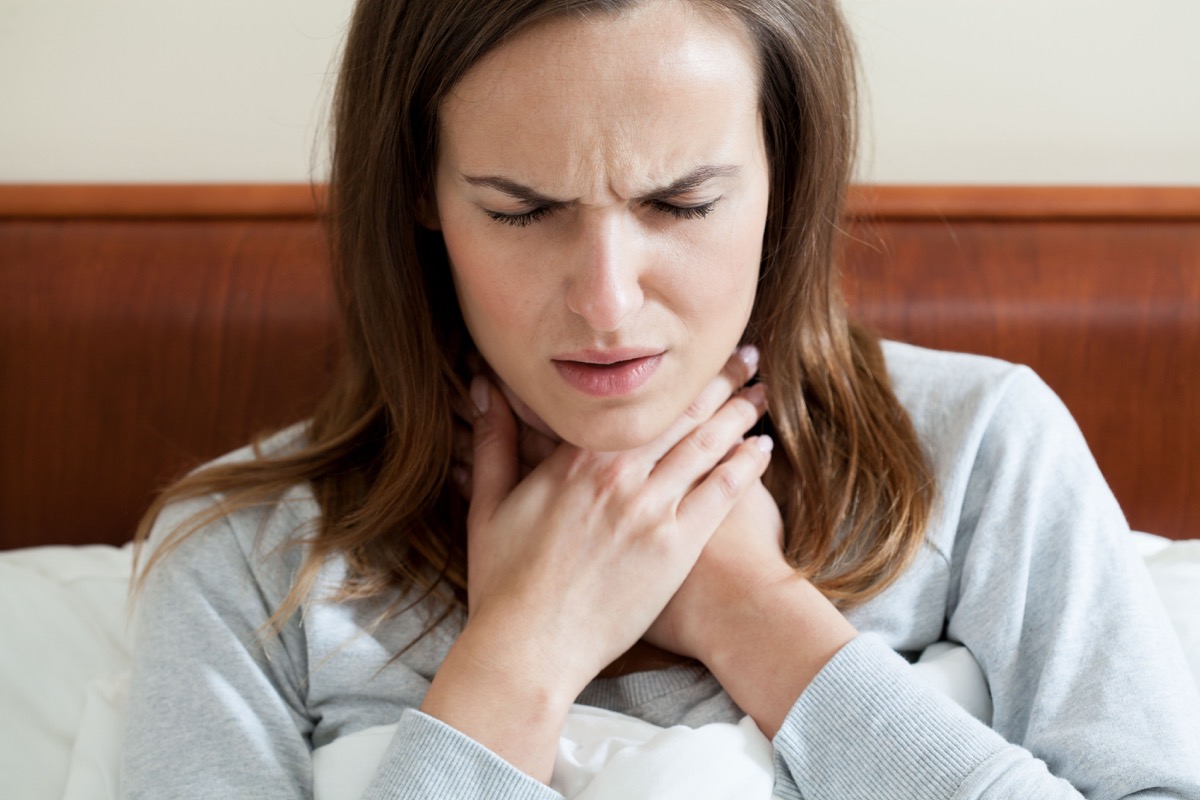 "Wheezing may be caused by pulmonary (related to the lungs) or cardiac (related to the heart) factors. Wheezing is a common cause of dyspnea, which is shortness of breath or difficulty breathing," says LungCancer.net.

These Symptoms May Appear Only After the Cancer Has Spread

According to the American Cancer Society, unfortunately the majority of lung cancers do not cause any symptoms until they have spread, which was likely the case with Diamond. However, if you do experience any symptoms, the sooner you go to your doctor, the more likely your cancer will be diagnosed and an earlier stage and your treatment is more likely to be effective.

"Most of these symptoms are more likely to be caused by something other than lung cancer. Still, if you have any of these problems, it's important to see your doctor right away so the cause can be found and treated, if needed," they explain. Keep reading for other signs that signify it has spread.

Other Signs That Signify Lung Cancer Has Spread

Additionally, there are other signs to look out for that could signify lung cancer that has spread to other parts of the body:

Again, if you experience any of these symptoms, it is likely something other than cancer. However, being proactive about your health and ruling it out as a possibility is the smart thing to do. "Some people, unfortunately, go misdiagnosed for a long time because their symptoms are similar to other diagnoses such as pneumonia, allergies or a cold," adds the American Lung Association. "If you feel that something is wrong, be persistent with your doctor. You know your body best and being persistent could save your life." So remember that, and to get through life at your healthiest, don't miss these 13 Everyday Habits That Are Secretly Killing You.