Sure Signs You've Already Had COVID, According to Doctors

A new study describes the "the long-term health consequences of patients" who had COVID-19.

Alongside over 450,000 Americans who have died of coronavirus are those who got the virus and lived—but are maimed by it, their lives ruined. They are called Long Haulers and they suffer Long COVID, or Post-COVID Syndrome, and it happens to an estimated 10% or more of those who get the virus. Now, a new study in The Lancet has been published, aiming to "describe the long-term health consequences of patients with COVID-19 who have been discharged from hospital and investigate the associated risk factors, in particular disease severity," measuring the consequences after six months. Read on to see if you have any of the symptoms, ranked here from less common to most common—and to ensure your health and the health of others, don't miss these Sure Signs You've Already Had Coronavirus.

You May Have a Low-Grade Fever

Some Long Haulers have a consistent fever; temperature fluctuations are not uncommon, as your body thinks it's still fighting the virus. "The degree of temperature elevation might reflect the severity of inflammation," reports a study in Critical Care.

You May Have a Headache

Runner and Long Hauler Natalie Hakala "described having a rapid heart rate, brain fog, and consistent headaches unlike any headache she's had before," reports Runner's World. "One sign" she was doing better was that "she can finish her sentences now. Just a few weeks ago, she would have to stop after a few words to catch her breath."

You May Have Myalgia

Dr. Anthony Fauci, the nation's top infectious disease expert and the director of the National Institute of Allergy and Infectious Diseases, has mentioned myalgia is a common Long Hauler symptom. "Myalgia describes muscle aches and pain, which can involve ligaments, tendons and fascia, the soft tissues that connect muscles, bones and organs," according to Johns Hopkins.

You May Have a Skin Rash

"The skin is really a window into how the body is working overall, so the fact that we could visually see persistent inflammation in long-hauler patients is particularly fascinating and gives us a chance to explore what's going on," Freeman told Medscape Medical News. "It certainly makes sense to me, knowing what we know about other organ systems, that there might be some long-lasting inflammation" in the skin as well.

You May Have a Sore Throat or a Difficulty Swallowing

USA Today tells the story of Diane Matikowski, 61, "a school nurse from Wallingford, Connecticut. Matikowski said she was exhausted for more than three months. Her symptoms also included sore throat, loss of smell and taste, leg cramps and twitches, fevers, a rash, hair loss and memory issues." "I would be watching something on TV and couldn't remember what happened in the last scene," she said.

You May Have Chest Pain

This could be a heart issue; many Long Haulers have heart damage. Or an inflammatory issue, like costochondritis. Or it could be a lung issue. "Marina Oshana's antibody test showed that the nasty flu-like illness she had back in February was actually COVID-19," reports FOX40. "My chest started to hurt and I couldn't breathe and I thought, 'This is not right,'" Oshana told the news channel. Now, "I get just out of breath almost immediately," she said.

You May Have Diarrhea or Vomiting

You May Have Dizziness

"Long haulers also have commonly described neurologic symptoms that include dizziness, headache, loss of smell or taste, etc. Carlos del Rio, at Emory University School of Medicine, wrote in a review that while stroke is not commonly reported acutely with COVID, encephalitis (inflammation of the brain), seizures and 'brain fog' have been described several months post initial infection," reports Scientific American.

You May Have a Taste Disorder

"Among the peculiar and alarming symptoms reported by individuals, who experts call long-haulers, are early signs of Parkinson's disease, scaly skin rashes and unpleasant tastes in their mouths," reports the Miami Herald. Many have lost their sense of taste and, for some, it may never come back.

You May Have a Decreased Appetite

You May Have Joint Pain

Joint pain makes a certain amount of sense. "Most of the symptoms of COVID-19 are a result of an overactive immune system response resulting in cytokines (which are the body's anti-inflammatory cells) to indiscriminately cause inflammation and problems with many or all of the organs in the body," reports Arthritis Rheumatic Disease Specialists. "This is the same mechanism that occurs in many autoimmune disorders such as systemic lupus erythematosus (SLE), vasculitis, rheumatoid arthritis and several other conditions."

You May Have Palpitations

Heart issues are all-too-common for Long Haulers. "We absolutely see patients who are in complete recovery or near complete recovery and are thinking that they are in recovery and weeks later come down with symptoms," Dr. Hari Thanigaraj with SSM St. Clare Hospital tells KMOV4 in Chicago. "He says it is typically around 12 weeks after contracting COVID-19 that a patient may start to see symptoms of Post-COVID Syndrome. Those symptoms include dizziness, chest pain, heart palpitations and leg swelling." 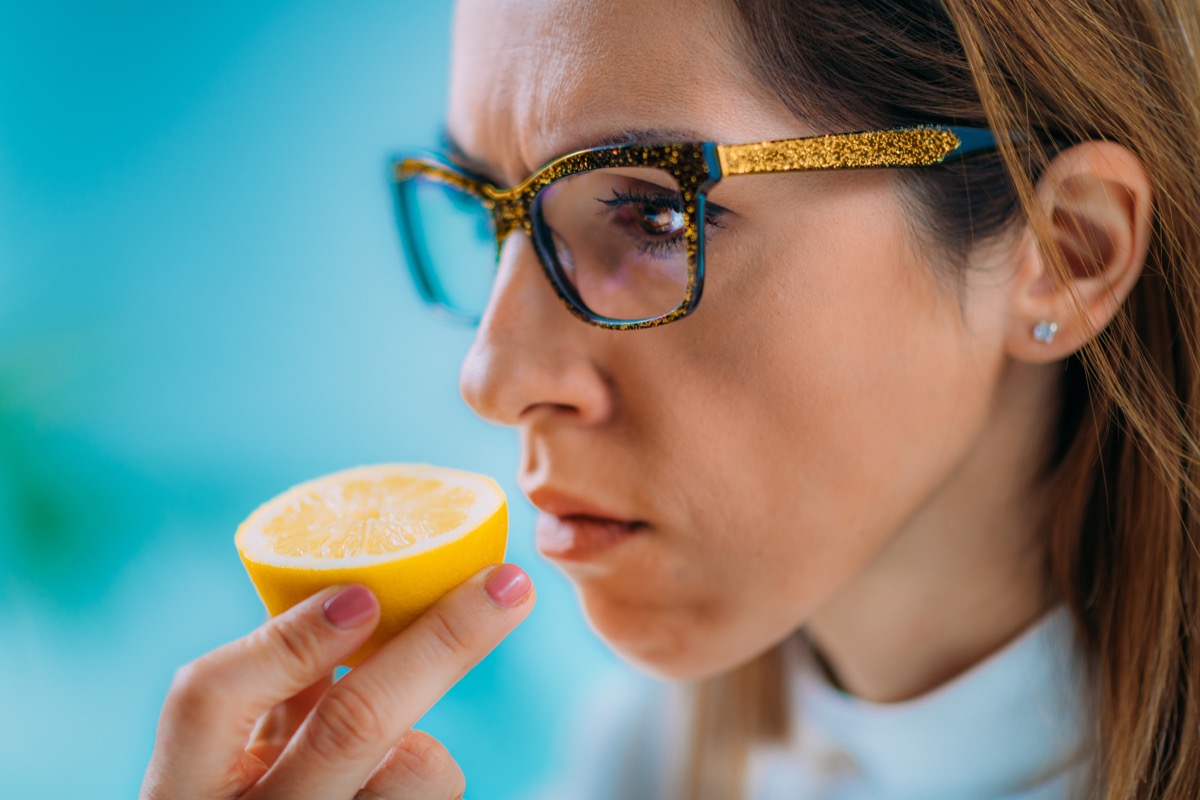 Long Haulers can lose their sense of smell. Or develop an odd disorder. "People suffering from long COVID are reporting a strong smell of fish, sulphur and a sweet sickly odour, as further symptoms of the virus emerge," reports Sky News. "The unusual side-effect is known as parosmia – meaning a distortion of smell – and may be disproportionately affecting young people and healthcare workers."

Actress Alyssa Milano, of Charmed and Who's the Boss, is a Long Hauler who experienced hair loss. Her initial symptoms were "stomach issues," "a headache like I've never felt before in my life" and "overwhelming fatigue," she said on the Dr. Oz Show—and then she started losing her hair. "It's hard, especially when you're an actor and so much of your identity is wrapped up in those things like having long silky hair and clean skin," Milano said. She suffered "brain fog" as well. "That's when thinking clearly becomes hard," reports UC Davis Health.

"Many people's sleep continues to be disrupted by predictable pandemic anxieties," reports the Atlantic. "But more perplexing symptoms have been arising specifically among people who have recovered from COVID-19. "We're seeing referrals from doctors because the disease itself affects the nervous system," Rachel Salas of Johns Hopkins' department of neurology tells the website. "After recovering, people report changes in attention, debilitating headaches, brain fog, muscular weakness, and, perhaps most commonly, insomnia," reports the Atlantic.

You are Most Likely to Have Fatigue or Muscle Weakness

"Post-viral fatigue is completely different to 'normal' tiredness. As well as total exhaustion, people with post-viral fatigue feel generally unwell. It is sometimes seen among patients recovering from other viruses, such as the flu or mumps," says Dr. Sarah Jarvis, Clinical Director of Patient. "Add to this unexplained muscle and joint pain, poor concentration, sore throat, headaches and swollen lymph nodes and it's hardly surprising it can be extremely debilitating."

As the new study found, Long Haulers usually have not just one symptom, but a rotating gallery of them. If you have experienced any of the symptoms mentioned in this article, contact a medical professional immediately. There is no "cure" but doctors can try their best to treat the symptoms—and to ensure you don't get sick in the future, and to protect your life and the lives of others, don't visit any of these 35 Places You're Most Likely to Catch COVID.

Alek Korab
Alek Korab is a Co-Founder and Managing Editor of the ETNT Health channel on Eat This, Not That! Read more about Alek
Filed Under
Coronavirus // Coronavirus Symptoms // Long COVID // Post-acute COVID Syndrome