Sure Signs You've Had a "Small Heart Attack"

Ignoring these subtle signals could be fatal.

Back in July, fans of good TV were shocked by news that Bob Odenkirk had collapsed on the set of Better Call Saul. After several nervous hours, the actor thanked well-wishers and his doctors, saying he had suffered a "small heart attack" and was on the mend. Unfortunately, in the U.S., someone has a heart attack every 40 seconds, according to the Centers for Disease Control and Prevention. But they aren't always dramatic. In some cases, you may not even realize you had one. These are some sure signs you've had a "small" or "mild" heart attack. Read on—and to ensure your health and the health of others, don't miss these Sure Signs You Have "Long" COVID and May Not Even Know It.

What Is a Heart Attack? 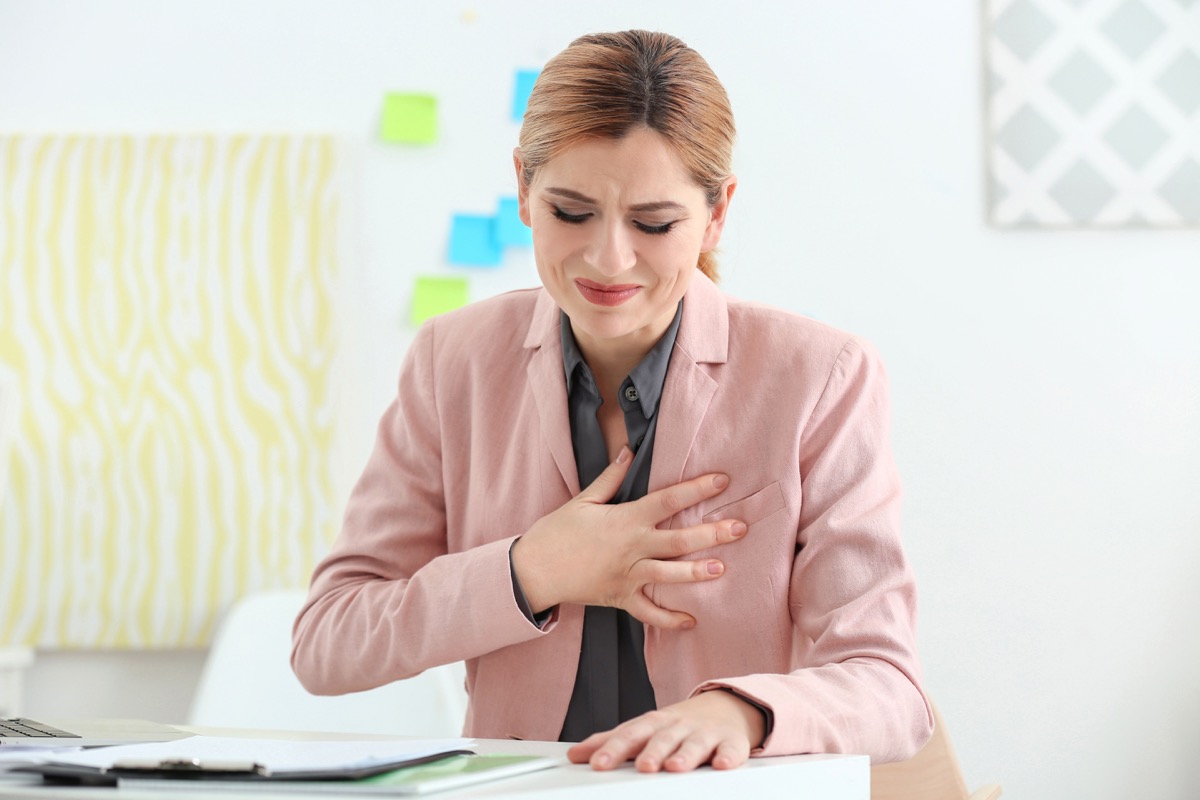 A heart attack happens when a blockage develops in the arteries leading to the heart, which prevents blood and oxygen from reaching the crucial organ. This leads to a heart attack. According to the American Heart Association, its most common symptom is chest pain. But signals can be much more subtle.

What Is a "Small Heart Attack"?

The full details of Odenkirk's heart attack are not yet known. Heart attacks vary in severity, but experts say all of them are reason for concern. "Despite a good outcome, a mild heart attack is still a big deal. All heart attacks are serious," said Joseph Campbell, MD, a cardiologist with the Cleveland Clinic.

A "mild heart attack" is commonly known as a non-ST elevation myocardial infarction, or NSTEMI. That's due to how the heartbeat looks on an electrocardiogram. "If you were told you've had a mild heart attack, it probably means your heart didn't suffer much damage and still pumps normally," said Campbell.

Again, it's not clear if this is the type of heart attack Odenkirk suffered. But it's important to know the signs of a mild, or even "silent" heart attack.

RELATED: This Supplement Can Raise Your Cancer Risk, Experts Say

Signs of a Mild Heart Attack

"Nearly half of people who have a heart attack don't realize it at the time," says Harvard Medical School. "These so-called silent heart attacks are only diagnosed after the event, when a recording of the heart's electrical activity (an electrocardiogram, or ECG) or another test reveals evidence of damage to the heart."

Mild Discomfort in Your Chest

Only half of heart attacks present with severe pain in the chest, says Harvard Medical School. Instead, you might feel only mild discomfort, pressure, tightness or squeezing in the chest area.

Pain in the arm or jaw can be a subtle sign of a heart attack, particularly in women. In the jaw, the pain may be felt in the lower left area. This pain may come on suddenly, wake you up at night, or begin or worsen with exercise.

A damaged heart has trouble circulating blood throughout the body, particularly to the brain. This can cause lightheadedness, dizziness or fatigue. If you have unexplained fatigue or dizziness, it's a good idea to get it checked out.

RELATED: 5 "Natural Cures" That are a Waste of Money

Nausea is a commonly overlooked symptom of a heart attack, says Kristin Hughes, MD, a board-certified emergency medicine physician based in Chicago. This is especially true for women, elderly people, and people with diabetes.

If you're having frequent shortness of breath without chest discomfort, you should have your heart checked out, says Hughes. This can be caused by pulmonary edema, a condition in which the lungs fill with fluid after cardiac tissue has been damaged by a heart attack. People with asthma might think this is a worsening of those symptoms, when in fact it's much more serious.

If you or someone you know has symptoms consistent with a heart attack, you should call 911 or get to an emergency room right away. "How well you fare after a heart attack depends on how quickly you act," says Campbell. "The sooner you get emergency care, the better the chance you will suffer less permanent damage to your heart." And to protect your life and the lives of others, don't visit any of these 35 Places You're Most Likely to Catch COVID.