This Makes You "Twice as Likely to Die in the Next Decade," Study Finds

A physical test may indicate this.

Human longevity is of great interest to researchers, who have uncovered a number of risk factors for a limited lifespan but have yet to find a crystal ball that can pinpoint how long a person has to live. But Brazilian scientists say one simple physical test may indicate whether you're at increased risk of dying in the next 10 years. Read on to find out more—and to ensure your health and the health of others, don't miss these Sure Signs You've Already Had COVID.

This Test Could Predict Your Longevity

A simple physical test may predict if you're more likely to die within the next decade: Whether you're able to stand on one leg for 10 seconds or longer. That's the conclusion of a new study conducted by Brazilian researchers and published this week in the British Journal of Sports Medicine.

Scientists found that people who were unable to balance on one leg for that long were twice as likely to die in the next 10 years than people who could maintain that balance.6254a4d1642c605c54bf1cab17d50f1e

The reason: poor balance can indicate frailty in older adults, and declining musculoskeletal fitness can be a sign of poor overall health, said Dr. Claudio Gil Soares de Araújo, lead author of the study and a sports and exercise physician in Rio de Janeiro.

"If you are younger than 70 years, you are expected (as the majority of those at that age) to successfully complete the 10 seconds," said Araújo. "For those older than 70 years of age, if you complete it, you are in better static balance status than your age-peers."

How the Study Was Conducted 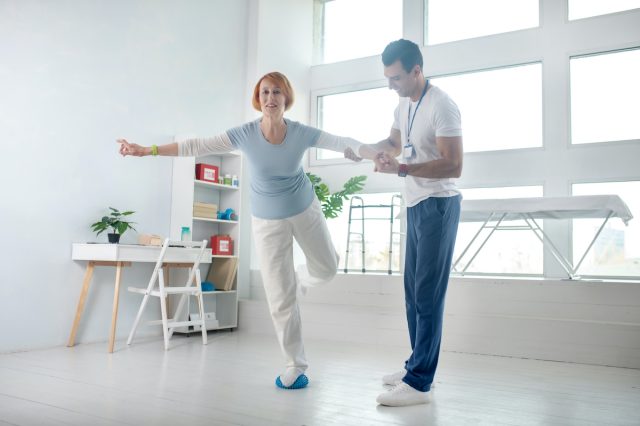 In the study, researchers tracked more than 1,700 people aged 51 to 75 starting in 2008. At an initial visit, the scientists recorded their weight, waist size and body fat percentage. Each participant was asked to balance on one leg for 10 seconds without holding onto anything for support. One in five were unable to do so. Age, weight problems and diabetes made participants more likely to fail the balance test. Ultimately, the scientists found that people who failed the balance test had a 1.84-fold greater risk of death within a decade than those who passed it.

The researchers said there may be a benefit to including a balance test as part of a routine physical exam in middle-aged and older adults.

"This is an observational study, and as such, can't establish cause," said Araújo. "As participants were all white Brazilians, the findings might not be more widely applicable to other ethnicities and nations."

"As one leg standing requires good balance, linked to brain function, good muscle strength and good blood flow, it likely integrates muscular, vascular and brain systems so it is a global test of future mortality risk—albeit crude," Dr. Naveed Sattar, a professor of metabolic medicine at the University of Glasgow, told CNN. "If someone cannot do the 10 seconds and is worried, they should reflect on their own health risks … also they could consult with their doctor if, for example, they have not had risk factors for cardiovascular disease measured or other chronic conditions such as diabetes tested for."

And to protect your life and the lives of others, don't visit any of these 35 Places You're Most Likely to Catch COVID.