As if we needed more on our plates, you might want to toss this common vegetable.

As if we needed more public health scares on our plate right now, the Centers for Disease Control and Prevention (CDC) just announced a new food safety alert. At issue? An outbreak of salmonella from red onions that, as of late last week, has over 500 reported cases and almost 60 hospitalizations across 34 total states.

The outbreak was first noted by the CDC on July 20 after salmonella from an unknown source had resulted in at least 125 people getting ill in 15 states, resulting in 24 hospitalizations but no deaths. Now, the CDC has pinned down the cause: A crop of red onions made by California producer, Thomson International Inc. The company has since recalled all of its onions, regardless of color, in all 50 states.

The Food and Drug Administration issued an advisory for consumers, restaurants, and retailers, directing each to "not eat, sell, or serve red, white, yellow, or sweet onions from Thomson International, Inc. or products containing such onions."

Since it's nearly impossible to tell the origin of loose onions purchased at a grocery store, the FDA advised consumers to throw out any onions of unknown origin.

As you can see in the map below (provided by the CDC), California, Oregon, and Nevada have reported the most cases related to the Thomson-produced onions. Northern midwestern and western states, like Michigan and Montana, have also reported an alarming number of cases. 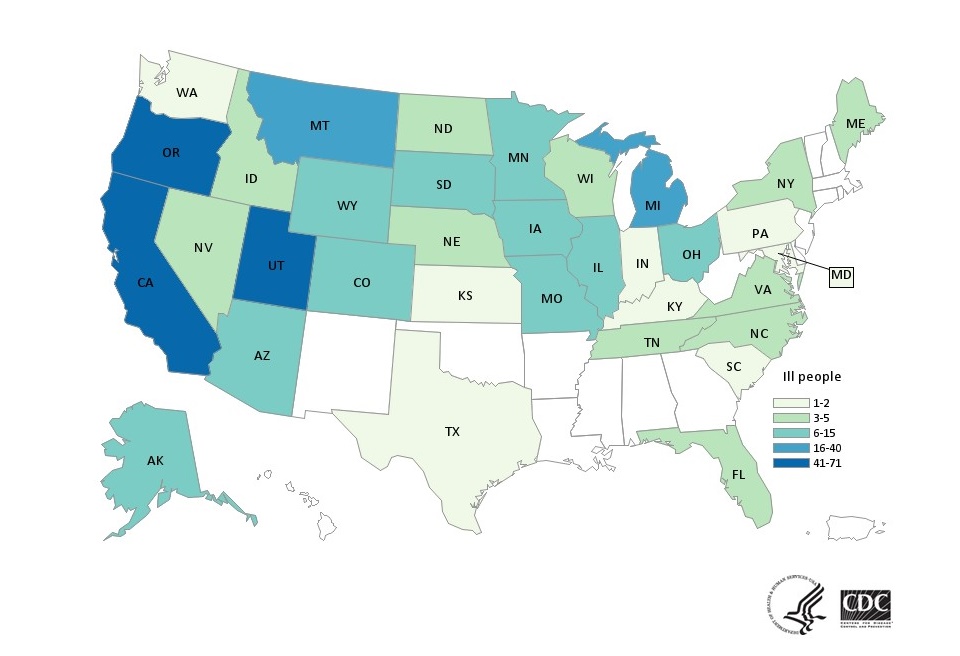 Onions are not the only food item currently presenting salmonella concerns. There is also a larger and multi-strain outbreak from poultry products that have led to rough 1,000 cases and even one death. The CDC updated a food safety alert last week warning consumers about a salmonella outbreak linked to poultry in backyard flocks, such as chicks and ducklings.

Common symptoms of Salmonella include diarrhea, fever, and abdominal cramps, though more severe cases of salmonellosis may include a high fever, aches, headaches, lethargy, a rash, blood in the urine or stool, and in some cases, may become fatal. Anyone who believes they may have this infection should immediately contact their health care provider.

For more food safety tips, here are the 17 Foods Most Likely to Give You Food Poisoning.