Sure Signs You Have Melanoma, Say Dermatologists

Dermatologists explain how to detect skin cancer and what to know about melanoma.

Cancer is the second leading cause of death, behind heart disease in the United States and skin cancer is the most common type, which is also the most preventable. There's three major skin cancer types:  basal cell carcinoma, squamous cell carcinoma and melanoma–the most deadly. The American Cancer Society states, "About 99,780 new melanomas will be diagnosed (about 57,180 in men and 42,600 in women). About 7,650 people are expected to die of melanoma (about 5,080 men and 2,570 women)." Knowing the signs of melanoma can be lifesaving and Eat This, Not That! Health spoke with dermatologists who explained what symptoms to look for. Read on—and to ensure your health and the health of others, don't miss these Sure Signs You've Already Had COVID

What to Know About Melanoma

Kellie Reed, MD, dermatologist, Westlake Dermatology, Austin tells us, "Melanoma is the most serious form of skin cancer. It often arises as a new abnormal mole on the body, but sometimes can develop within an existing mole. If you have a first degree relative with melanoma, you have a higher risk of developing a melanoma. All skin types are susceptible to melanoma."

Skincare expert Dr. Simran Sethi, MD, founder of RenewMD Beauty & Wellness explains, "Melanoma is most common in caucasions, even though Melanomas can occur in people of color, the incidence is extremely low. It is over 20 times more common in caucasions than in people of color. Melanoma can occur due to sun exposure or without sun exposure, which makes it difficult to always detect early.  Melanoma is thought to occur due to increased exposure to UV light. Because darker skin tones have more melanin, the melanin filters out significant amounts of harmful UV radiation to the skin which protects against developing all skin cancers, including melanomas, but not entirely, of course. Melanomas are becoming more common in women under 40 and typically sign or physical indication of melanoma occurs at the back of the leg. In men, melanomas tend to occur on the trunk of the leg. Melanoma, interestingly, can also occur in areas that do not get significant sun exposure like the eye, or under finger or toe nails. This means that any suspicious lesion should not be ignored, even if it is in an atypical spot or occurs on someone who is darker skin toned.  Other risk factors for melanoma include: a family history of the disease conditions that weaken the immune system, living close to the equator and/or higher elevations where UV exposure is greater.

Finally, there is a melanoma variant that occurs predominantly in people of color, that is not UV mediated and occurs in non UV-exposed areas such as the mucosal membranes (gastrointestinal tract, vagina). This subtype of melanoma is difficult to treat and is usually detected at a later stage in the disease when the cancer has already spread. Unfortunately, there is no way to screen for this type of melanoma at this time."

Melanoma is Treatable When Caught Early

Dr. Reed says, "It is highly treatable when detected early, but advanced melanoma can spread to lymph nodes or organs and can be deadly. The average five-year survival rate for patients whose melanoma is detected and treated before it spreads to lymph nodes is 99%."

Dr. Sethi tells us, "Melanoma is very treatable if detected early. People treated for melanomas early (while the cancer is confined to the epidermis, our most superficial skin layer) have a 99% survival rate at the 5 year mark, which makes this a very treatable cancer. However, this is only true if the melanoma is treated before it spreads to nearby organs, lymph nodes and sometimes even the mucosal membranes. Once melanoma has spread to nearby lymph nodes, the 5 year survival rate drops to about 65%, and if it spreads further to other organs, the survival rate comes down to a dismal 30%."

How to Help Prevent Melanoma

In particular, using a tanning bed before 20 years old can increase your chances of developing a melanoma by 47%.

Other tips to help prevent melanoma include:

-Seek shade; avoid peak sun hours such as between 10 am to 4 pm.

-Take caution with water, snow, and sand as UV light reflects from these surfaces and can increase your sunburn risk."

According to Dr. Sethi, "We don't know exactly how melanomas are triggered but we do understand two key prevention strategies: UV protection- UV protection is essential in protecting high risk groups like caucasions or people living at high elevations or near the equator. It is also important to note that UV protection has to occur year round, no matter where you live, what time of the day and season. A plus is to have FULL SPECTRUM protection that not only protects from UVA/UVB, but also HEV (blue light).

Early detection- Most melanoma detection has actually occurred through self exams at home, but this can be challenging because we know that one of the most common areas of melanoma formation is at the back of women's legs, which is an area that is difficult to observe or pay attention to. This is why getting a full body skin exam by a dermatologist once a year, if you have a personal or family history of melanoma, is essential. Seeking physician attention upon detection of a skin lesion that is changing in color, shape or size is another intervention that will allow early detection, and results in a successful treatment of melanoma."

Change in the Characteristics of a Mole

Dr. Sethi says, "If a mole grows in size, or gets darker, it is important to get it looked at by a physician. A mole that has not changed in color, size or characteristics is likely benign, but ones that are changing, need to be examined and possibly biopsied."

According to Dr. Sethi, "If a mole or darker lesion looks different than typical moles or spots on your body, then it should be brought to the attention of a physician. We call this the 'ugly duckling sign' which means that a melanoma typically will look different to and stand out from other surrounding moles or dark spots on the skin."6254a4d1642c605c54bf1cab17d50f1e 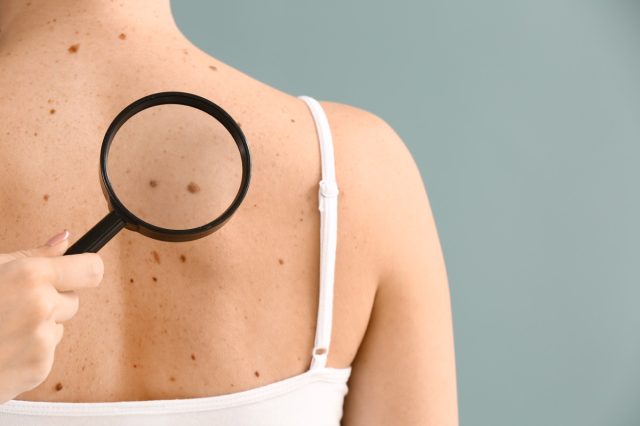 Dr. Sethi states, "If you see a dark lesion on your palm, bottom of your foot, scalp or axilla, it is important to check the lesion for melanoma. These are not sun-exposed lesions, but if they do develop melanoma, this melanoma variant is more difficult to treat than the variant caused by UV exposure."

Other Things to Note

In general, if you notice a mole that is new, different from the other's ("the ugly duckling mole"), or is symptomatic such as itching or bleeding, then do have it evaluated by a board-certified dermatologist. Not all melanomas are raised moles, in fact, more commonly, they are flat (these are the superficial spreading melanomas). Melanomas are also not necessarily in sun-exposed areas; they can also appear in non-sun-exposed areas such as in between toes and genitals for example.

Melanoma is due to the uncontrolled growth of pigment-producing cells (melanocytes). This uncontrolled cell growth microscopically is what leads to the variable, changing, and/or growth that is seen clinically on the skin leading to the signs listed above."