Just because it's organic doesn't mean it won't give you belly fat...

"Fresh", "active", and "strong" are just a few of the synonyms for "healthy" you'll find in the Thesaurus. What you won't find printed on the same page is the term "organic." Because despite what you may have heard, "organic" and "healthy" aren't synonyms. (Go ahead; look it up if you don't believe us.)

That's not to say that a large portion of organic fare isn't healthy, though. When it comes to things like fresh fruits, veggies, and meats, organic is often the better choice. But things get a bit fuzzy when you start talking about processed snacks. While organic chips, candy, and crackers get a leg up over their conventional competitors by being free of stuff like high fructose corn syrup and potentially dangerous artificial dyes, if weight loss is among your chief health goals, these treats won't do your body any favors. And that's because, at the end of the day, these things are still sugar bombs that are filled with empty carbs and serve up little in terms of nutrition.

To help you identify friend from foe in the snack aisle, we dug through all of the organic options and uncovered some of the worst flat belly assailants. Stay away from these bags of junk and nibble your way slim with help of these 17 Cheap Organic Foods You Must Buy, instead! 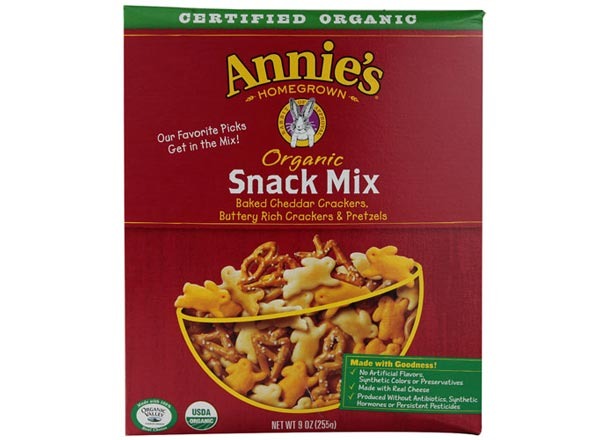 Annie's gets a pat on the back for using real butter and cheese in their snack mix, but the fact of the matter is that the bulk of this box is filled with wheat flour, vegetable oil, and sugar. Three things that do absolutely nothing for your body. For 130 calories per serving, you can find a snack with far more protein and fiber to keep you satiated. 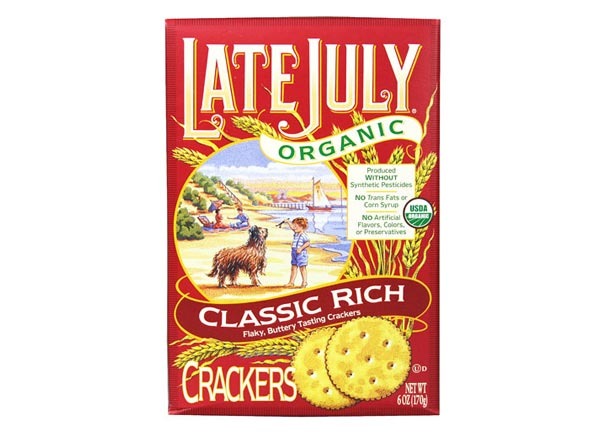 The first three ingredients listed on this snack's nutrition panel are organic wheat flour, organic evaporated cane juice, and organic oleic safflower oil. Which means the majority of what you're eating is empty carbs, sugar, and fat. While we think it's best to think of crackers as a "sometimes treat" if you don't want to give up your daily crumbs, we suggest topping them off with a source of fiber or protein to slow the absorption of the carbs. Natural nut butter or hummus topped with an olive or a sun-dried tomato are all good options. 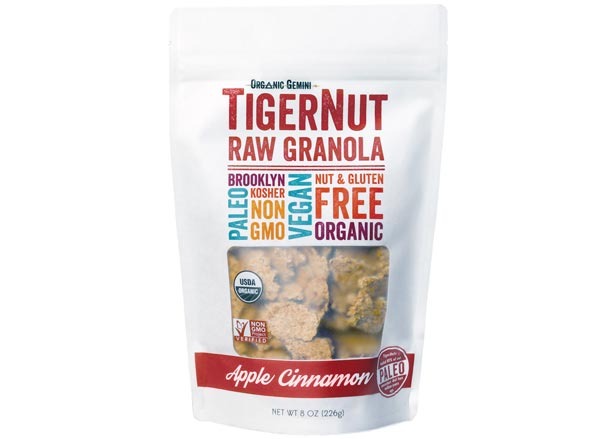 In case you're not already familiar, a tiger nut is a small root vegetable filled with prebiotic fiber and resistant starch, a starch that does exactly what the name implies—resists digestion and aids weight loss. While an ounce of plain ol' tiger nuts carries 150 calories and 6 grams of naturally-occurring sugar, making it a sensible snack, we can't say the same about this raw granola. Thanks for the addition of maple syrup (it's the third ingredient on the nutrition panel), apples, seeds, and raisins, this granola packs up to 620 calories and 52 grams of sugar in a ½ cup serving size! (No one eats just an ounce of granola, as their serving size would lead you to believe). For some healthier ways to use the root veggie, check out these Surprising Uses for Tiger Nuts. 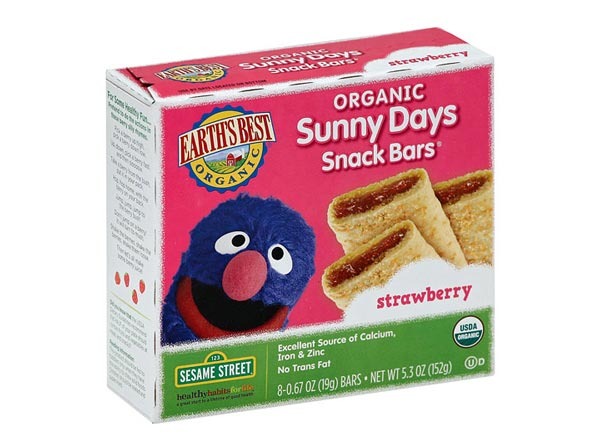 The only thing that makes this bar better than a Kellogg's Nutri-Grain Bar is the smaller serving size. Both snacks have about 3.5 calories and 0.3 grams of sugar per gram of food, but Earth's Best is literally half the size, which makes it seem like a healthier pick. The bottom line here, though, is that there are far better snack bars on the market with less sugar and more protein and fiber—we suggest picking up one of those instead. 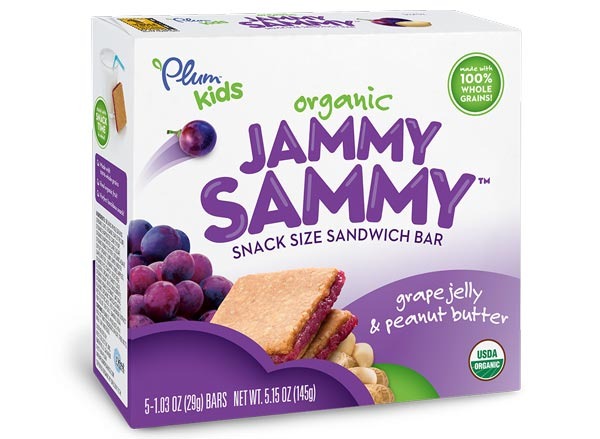 The best peanut butter sandwich is one made with a natural nut butter spread, whole grain, sprouted bread, and fresh fruit (instead of jam). While Plum gets props for using wholesome ingredients like organic oats and barley flour, we're kicking it to the Not That! list because they rely on not one, not two, but four major sources of added sugar: cane syrup, cane sugar, agave, and grape juice concentrate. Sure, they're all organic, but that doesn't change the fact that they will spike your blood sugar and give you a sugar rush. 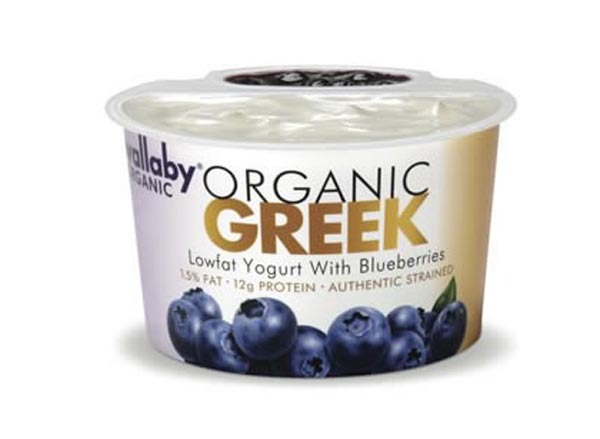 There are 15 grams of sugar in this container and 11 of them are the added variety from organic cane sugar and lemon concentrate. If you want a blueberry yogurt, you're better off adding fresh fruit to a plain container because this syrupy mess is definitely a Not That! 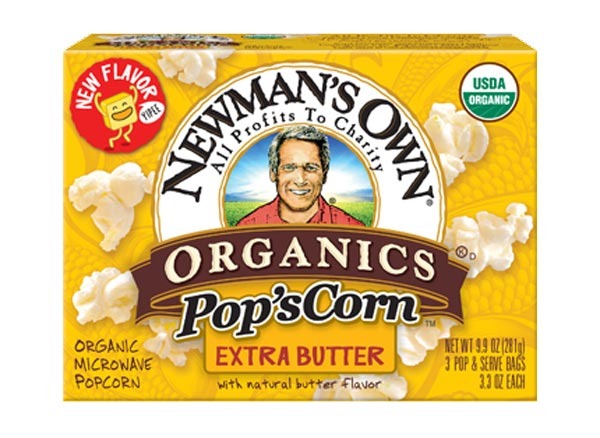 Whether or not the butter is organic, extra globs of it is never a good idea. 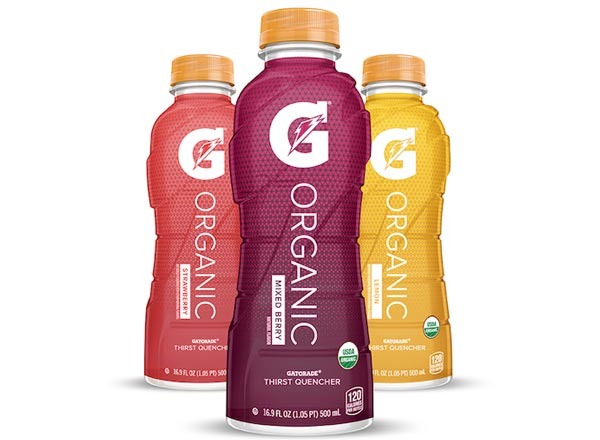 Gatorade's first organic product, G Organic, may be void of stomach-churning additives like wood rosin and artificial dyes that have been linked to cancer and hyperactivity in children, but it still has much as much sugar as its conventional cousin. According to Lisa Heaton MS, RD, CSSD, Sports Dietitian at Gatorade Sports Science Institute, keeping the drink super sweet was purposeful. "The sugar content in Gatorade is functional and is meant to provide fuel for athletes," she stated in a previous interview. But the things is, most of us don't work out long or hard enough to require that much sugar. Unless you're working out for at least an hour and a half, we suggest skipping this too-sweet fitness snack. 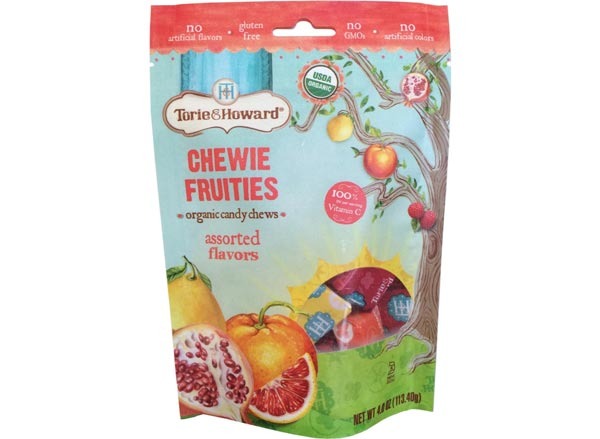 This package talks a lot about what it doesn't include—dairy, wheat, casein, soy, GMOs, corn syrup—but these Starburst copycats are almost as bad as the real thing. The bulk of each tiny candy is pure sugar in the form of brown rice syrup and dried cane syrup. In fact, a seven-piece serving provides an entire day's worth of sugar! Yuck. For healthier ways to indulge your sweet tooth, don't miss these 25 Nutritionist-Approved Ways To Satisfy Your Sweet Tooth. 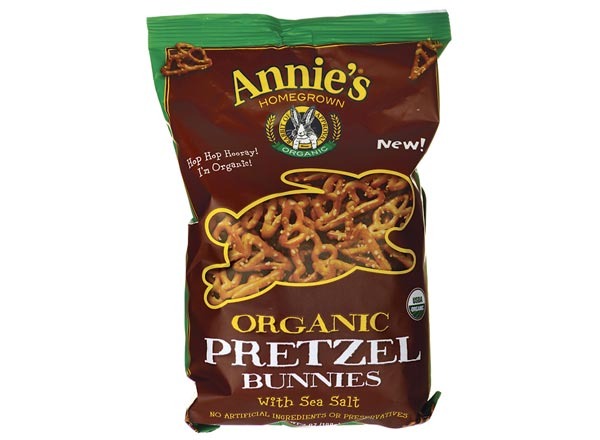 Don't get it twisted: Pretzel offers very little in the nutrition department, and that doesn't change just because it's organic. The snack is primarily made up of flour, salt, and oil, which won't leave you full or satisfied. There are far better snacks to be had—like these 50 Snacks With 50 Calories or Less. 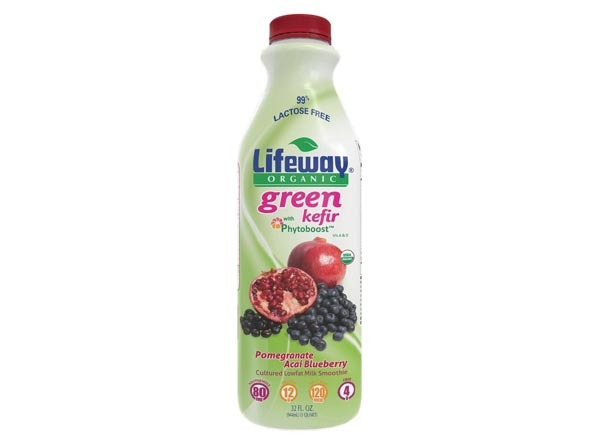 This smoothie-like drink contains lactase–an enzyme that breaks down lactose, the sugar in milk that causes stomach issues for some people. But a single cup serving also contains nearly a day's worth of sugar! If you want to give a flavored version of the fermented milk drink a try, we suggest picking up a bottle from their BioKefir line. While it's not organic, each container is perfectly portioned to a 3.5-ounce serving so you're only getting 9 to 10 grams of sugar in one sitting, depending on the flavor of your choosing. Or better yet, stick with the unflavored variety, which is totally free of added sweetness. 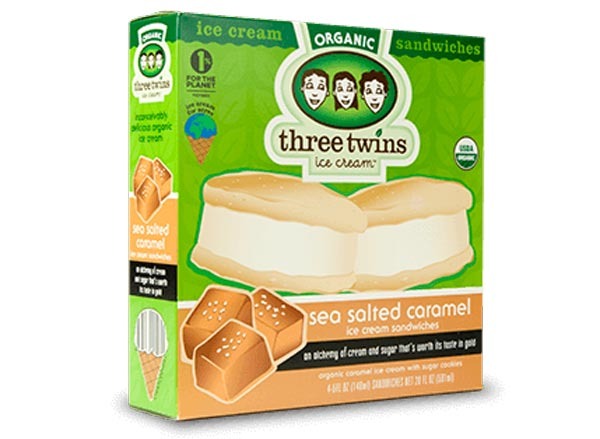 As a general rule a snack shouldn't exceed 250 calories, so no matter how you slice it, this ice cream sandwich is just far too calorie-dense to be a smart pick. Three Twins makes a Madagascar vanilla ice cream wafer sandwich that has just 190 calories. We suggest picking up a box of those instead. 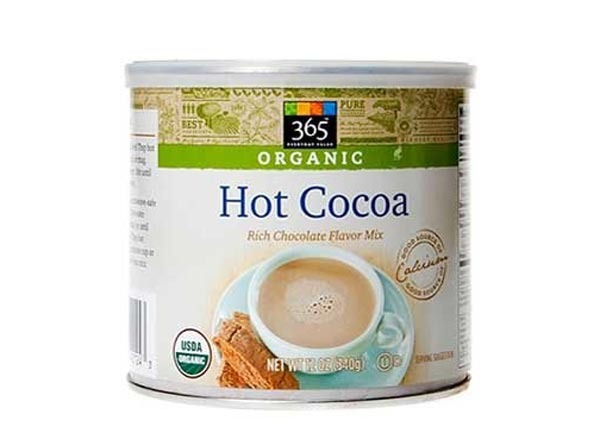 Yes, it's organic. But in the Eat This, Not That! hot cocoa taste test, several tasters found this Whole Foods cocoa "bland" and were turned off by its "thin" and "chalky" consistency. One person even went so far as to describe this mix as "atrocious" while another found the taste to be reminiscent of dirt—it doesn't get much worst than that. Moreover, the bulk of the container is filled with organic cane syrup solids and organic nonfat dry milk, which proves it's processed similarly to most other brands. If you need a cocoa fix, try buying the real thing—raw cocoa or raw cacao powder—and adding in a small amount of honey and milk to taste for a better alternative. 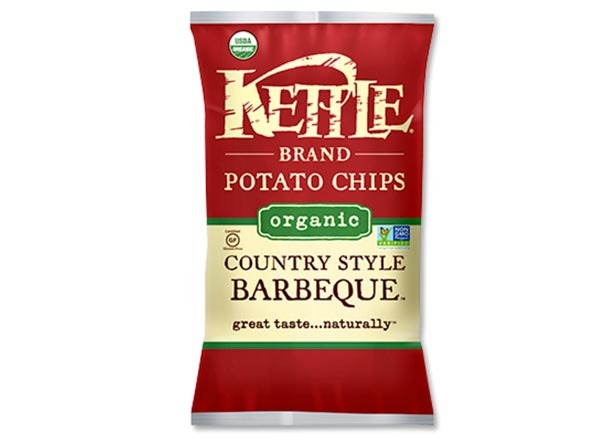 Don't be fooled by the organic label, in terms of nutrition, these Kettle Brand chips aren't much better than Lay's Barbecue Potato Chips. They both carry the same amount of calories and fat, so they'll have equal effects on your waistline. Save your cash and splurge for organic grub where it matters: in the produce and meat sections. 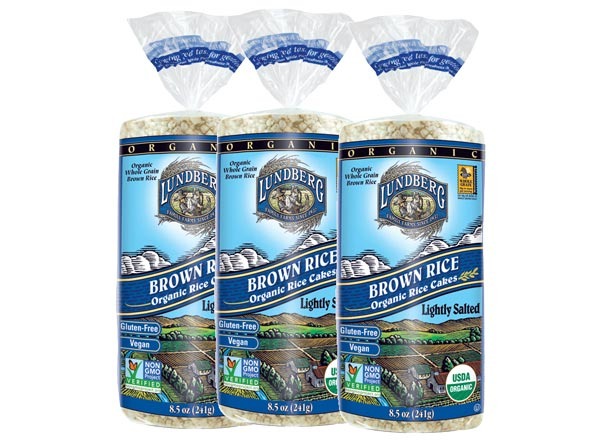 Despite the fact that they're organic and made with brown rice, these are still considered to be dietary duds. Just look at that dismal fiber and protein content. To makeover this "meh" organic snack, swap a two cake mini-meal for one rice cake topped with a generous swipe of nut butter. The combo will keep you fuller for longer and has the added benefit of being a complete protein with all nine essential amino acids. 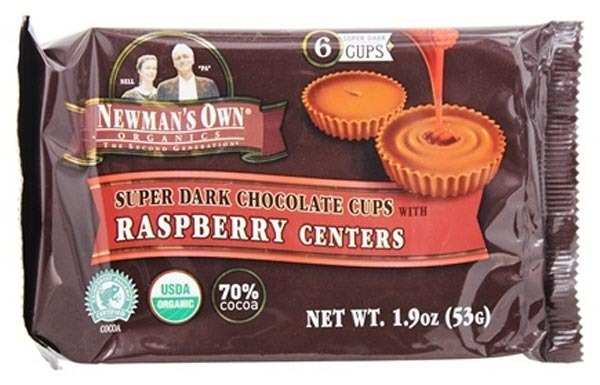 It's made with dark chocolate! It's filled with fruit! But don't be fooled, candy is never part of a healthy diet—and that goes for the seemingly-healthy organic candy, too. Organic candy is still candy. It's also a nutritionally-void food, meaning it has nothing in the way of vitamins or nutrients your body craves. Worse, this stuff doesn't even contain a single drop of non-alkalized cocoa, which is that make chocolate treats somewhat healthy in the first place. Most of these cups are filled with chocolate liquor and sugar so stock up on these 17 Best Chocolates, instead.