Move over Queen Quinoa, there's another healthy grain in town that's gaining popularity. Here, everything you need to know about farro—the coolest newcomer in the grain aisle. Plus, all the tasty ways to enjoy it!

Okay, first thing's, first. Farro (which is referred to by some as emmer wheat), isn't exactly a new grain. In fact, the grain dates back to 17,000 BC. But until recently, it wasn't a staple in conventional supermarkets. However, as more people are becoming interested in ancient grains, the protein-filled carb, has quickly gained popularity—and thanks to its superfood-esque nutritional qualities, it's giving quinoa a real run for its money. Aside from its protein content (it's got more of the stuff than quinoa), the power starch is also overflowing with satiating fiber and is a potent source of magnesium, energizing iron, and zinc, an essential mineral that's been shown to rev sex drive and aid protein synthesis and wound healing. Oh, and not to mention, it's quite tasty, too. With it's robust, nutty flavor and satisfyingly chewy texture, it a grain you won't tire of eating on the reg. To learn more about the benefits of farro, as well as some delicious and easy ways to eat it, read on. And when you're done, be sure to check out these 25 Best Carbs for Weight Loss to discover even more ways to carb up and lean down.

It's Similar to Rice

If you're not a fan of the "poppy" texture of quinoa, it's worth giving farro a try. It's a bit softer and chewier, like brown rice, with a nutty and earthy flavor. But unlike rice, farro is forgiving if overcooked. While rice that's sat on the stove for too long will becoming mushy, emmer wheat will hold onto its satisfying texture. In other words, it's the perfect grain for anyone who's not quite an Iron Chef.

It Has More Protein Than Quinoa

Quinoa may be hailed as one of the most protein-rich grains, but farro actually carries one more gram of the muscle builder. While a ¼ cup of dry quinoa has 6 grams of protein, the same serving size of farro has 7 grams, which is more than you'd find in an egg. (Surprising, right!?) For even more eats rich in the nutrients, check out these 26 Foods with More Protein than An Egg.

Julius Caesar Was a Fan 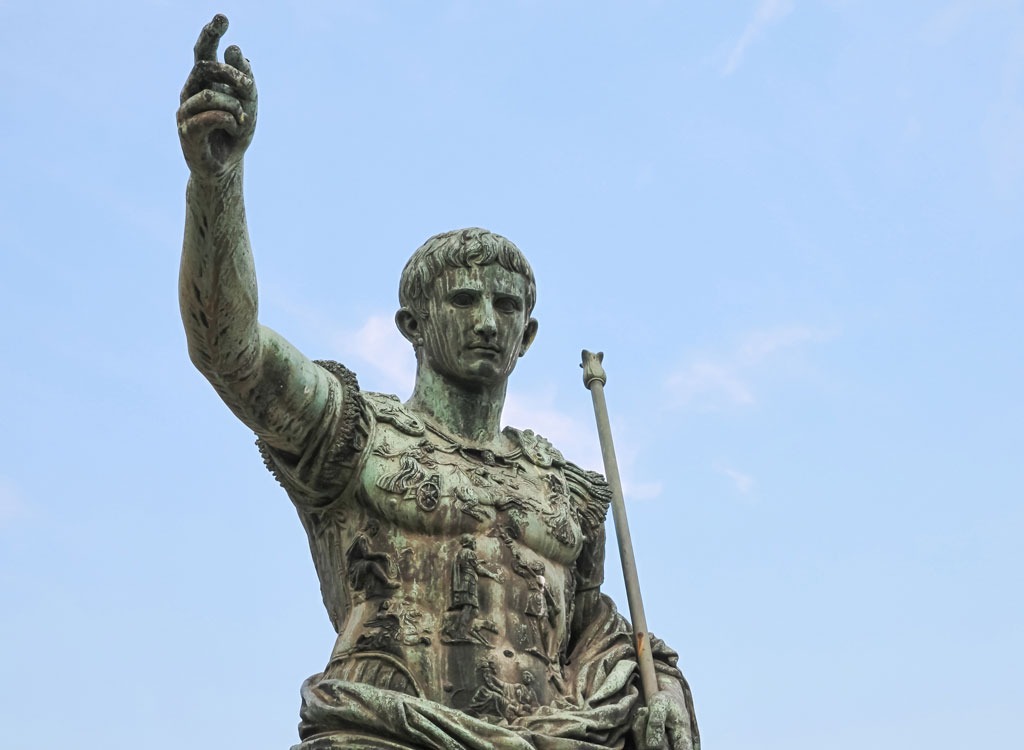 Not only was farro was a diet staple in ancient Rome and the main source of nourishment for the Roman Legions, it was even used as a form of currency. And Italians aren't the only ones who are fans. The grain has been found in the tombs of Egyptian kings, too, so it's safe to assume royals and politicians alike likely ate the stuff. If it was good enough for Julius Caesar and Cleopatra, it's good enough for me, too!

We've already bragged about farro's killer protein profile, but that's not the only nutrient that makes this grain so satiating. Whole farro (as opposed to semi-pearled and pearled) also packs 7 grams of fiber in a ¼ cup (dry) serving, which is 28 percent of the day's recommended intake. If your lunchtime salad typically leaves your stomach begging for more, consider topping the veggies with some farro—all it takes is a small serving to reap its ultra-filling benefits. Looking for other healthy ways to ward off hunger? You'll love all these The 20 Most Filling Healthy Snacks.

It Can Fight Headaches & Fatigue

Though most of us own an iron, few of us, especially women, eat enough of it—which isn't good news for our health. The mineral aids oxygen circulation, so when we don't consume enough it, the lack of oxygen can result in fatigue, slowed muscle growth, and headaches. "With less oxygen-rich cells to go around, chances are your brain isn't getting the amount it needs. The oxygen deprivation can cause tightness in the head more frequent than usual headaches," explains Lisa Hayim, registered dietitian and founder of The WellNecessities. Aside from farro, there are loads of other ways to get more of the vital nutrient in your life. All of these 8 Iron Rich Foods can help.

It Needs a Bath

As we noted before, there are three different types of farro: whole farro (which is the most nutrient- and fiber-dense), semi-pearled (part of the bran has been removed, but some fiber is still retained) and pearled (the bran has been fully removed and very little fiber remains). In terms of nutrition, whole farro is your best bet, but it can take about a half hour to make, which is up to 20 minutes more than quinoa and brown rice. To cut down on cooking time without sacrificing nutrition, look for a bag clearly marked as whole farro (some shady kinds don't specify), and soak it overnight in a bowl or pot of water. (Use a 3:1 ratio of water to grain.) This extra step will literally take all of 30 seconds, but will save you a solid 20 minutes of cooking time. Yes, that's right. It brings the cooking time down to a mere 10 minutes! For even more recipes that only take minutes to prepare, check out these 20 Lazy Dinner Recipes for Weight Loss.

It's Actually More Than One Grain 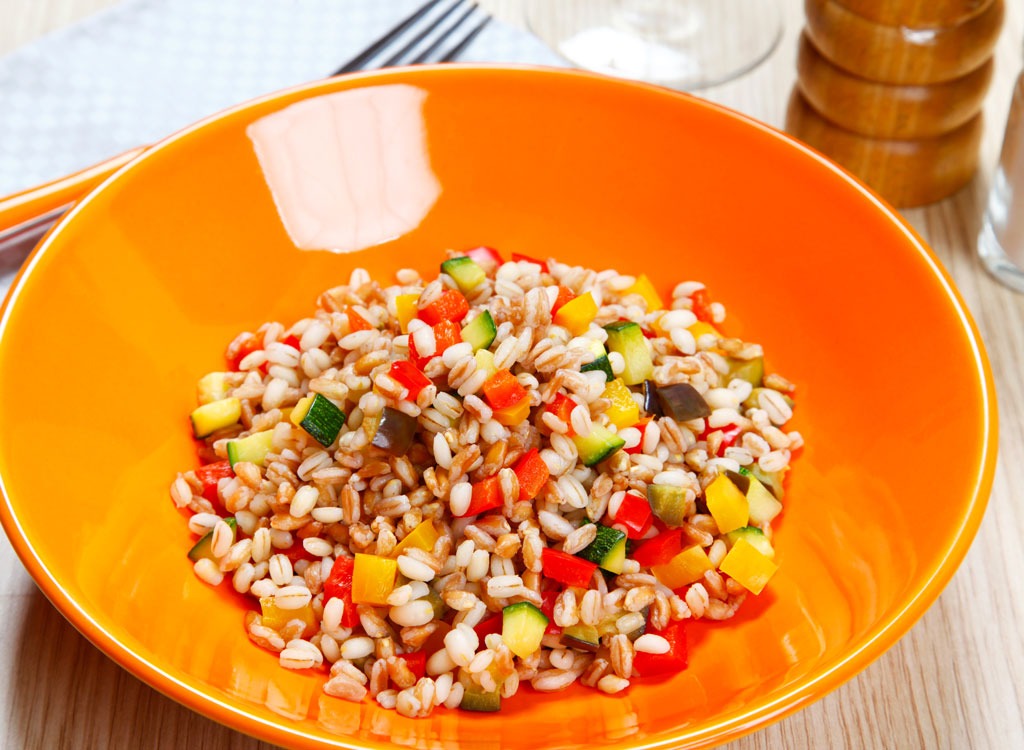 Fun fact: Though we've been talking about emmer wheat as though it's one grain, it's actually three. Farro is an Italian word that collectively refers to three ancient grains: einkorn, spelt, and emmer wheat. Be sure to file that nugget of information away for your next trivia night!

And Now the Best Part: Tasty Ways to Eat It!

Throw it Into Your Salads 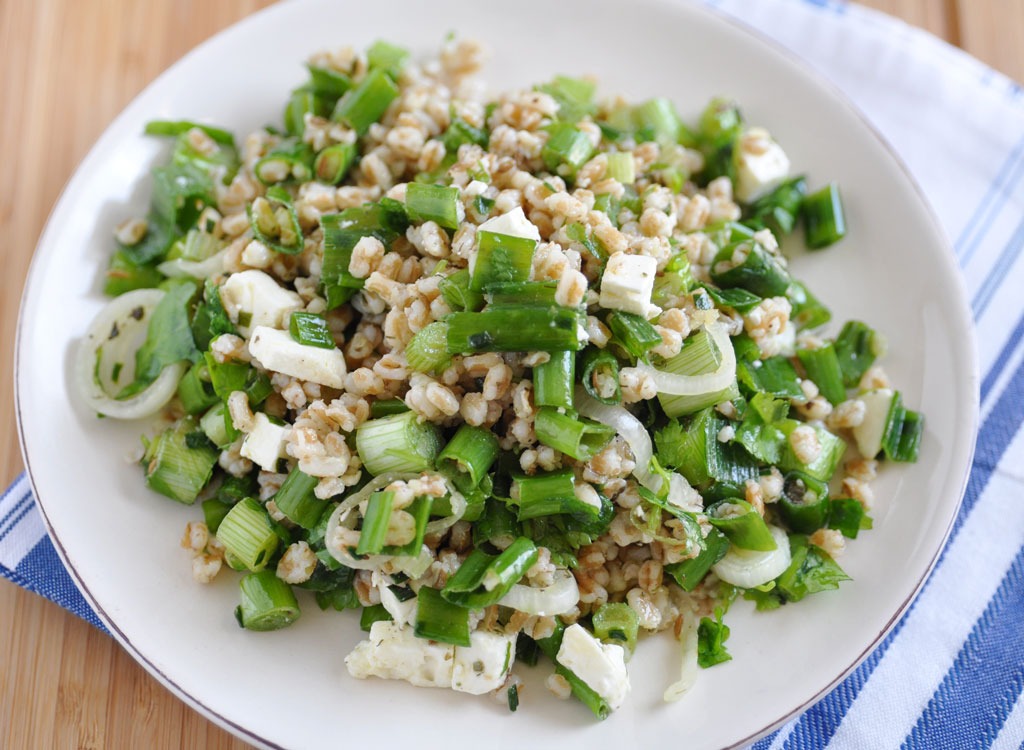 Big tabbouleh fan? Use farro in place of bulgur, or simply toss it on top of an entree-sized salad along with the veggies and protein to boost your meals staying power. The grain pairs particularly nicely with typical Greek salad ingredients: arugula, chickpeas (one of these 26 Best Vegetarian Protein Sources), cucumber, roasted red pepper, olives, and feta cheese. Simply delish!

Transform it into Breakfast 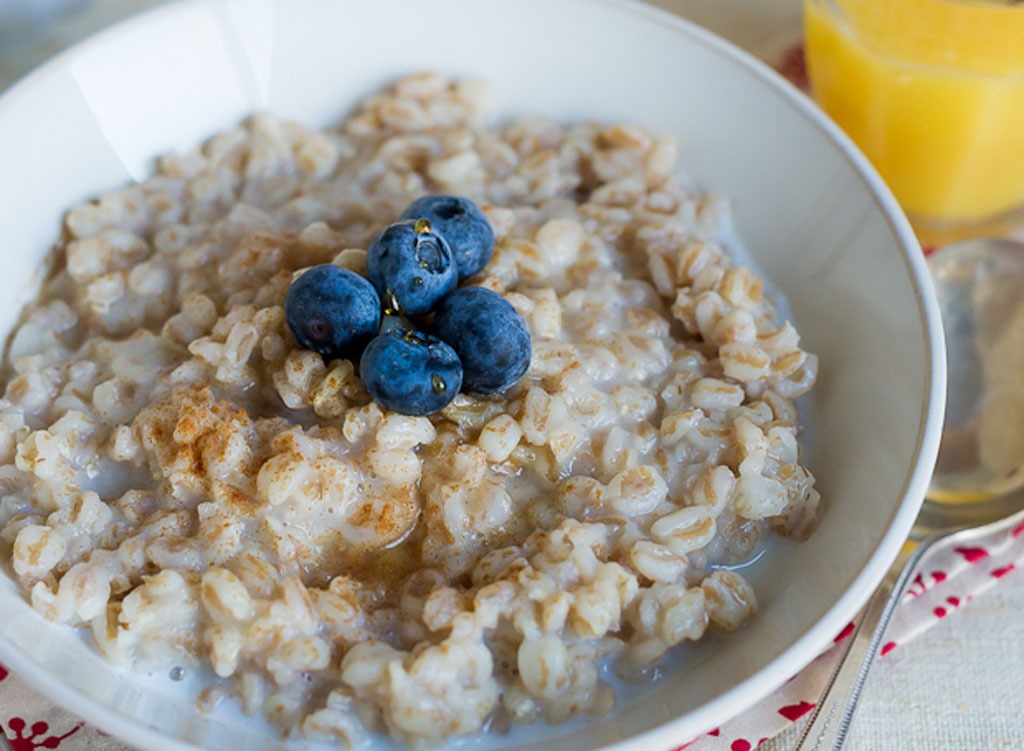 If you're a fan of eating oatmeal for breakfast—but want to mix things up a bit—consider using farro instead of oats. Mix the grain with water or milk and top with fruit, cacao nibs, and nuts for a sweet spin on the dish, or go the savory route with eggs, scallions and a miso vinaigrette. Get the full recipe for the latter option from the blog, Local Milk. 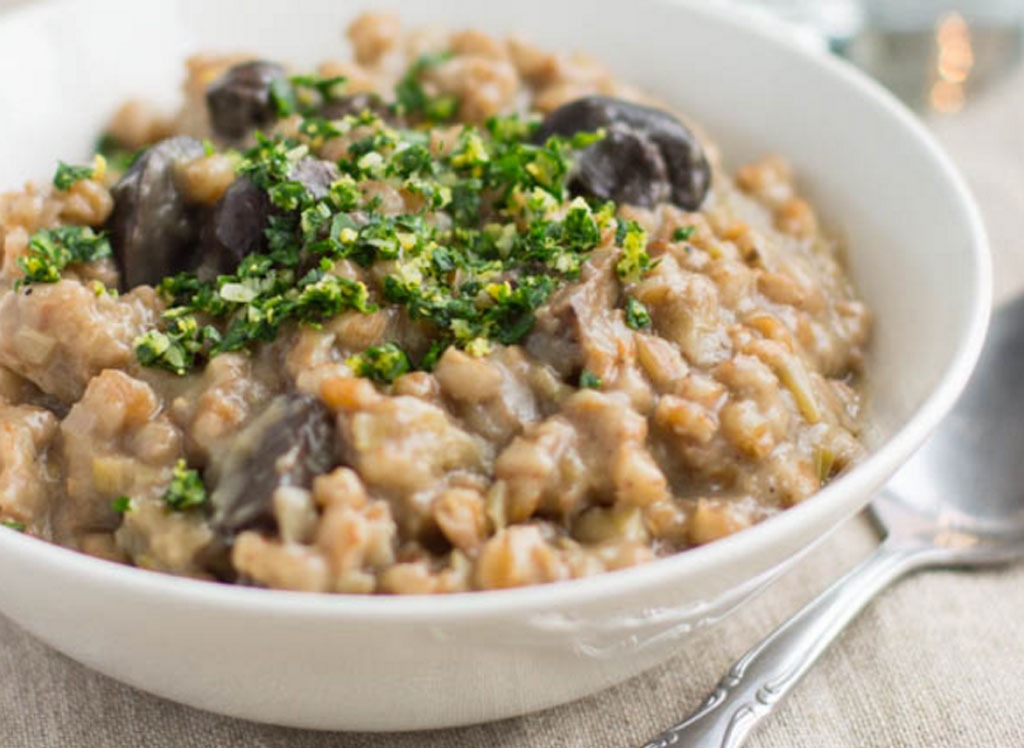 If you enjoy risotto, you're going to love this nutrient-dense spin on the classic dish. By swapping low-fiber white rice for farro, you'll create something called farrotto. We love this slow-cooker recipe by blogger, Culinary Colleen, which adds tasty Parm and vitamin-rich mushrooms and leeks to the mix. For even more tasty dishes that rely on the "set it and forget it" kitchen appliance, check out these 35 Healthy Crock Pot Recipes.

Add it to Soup 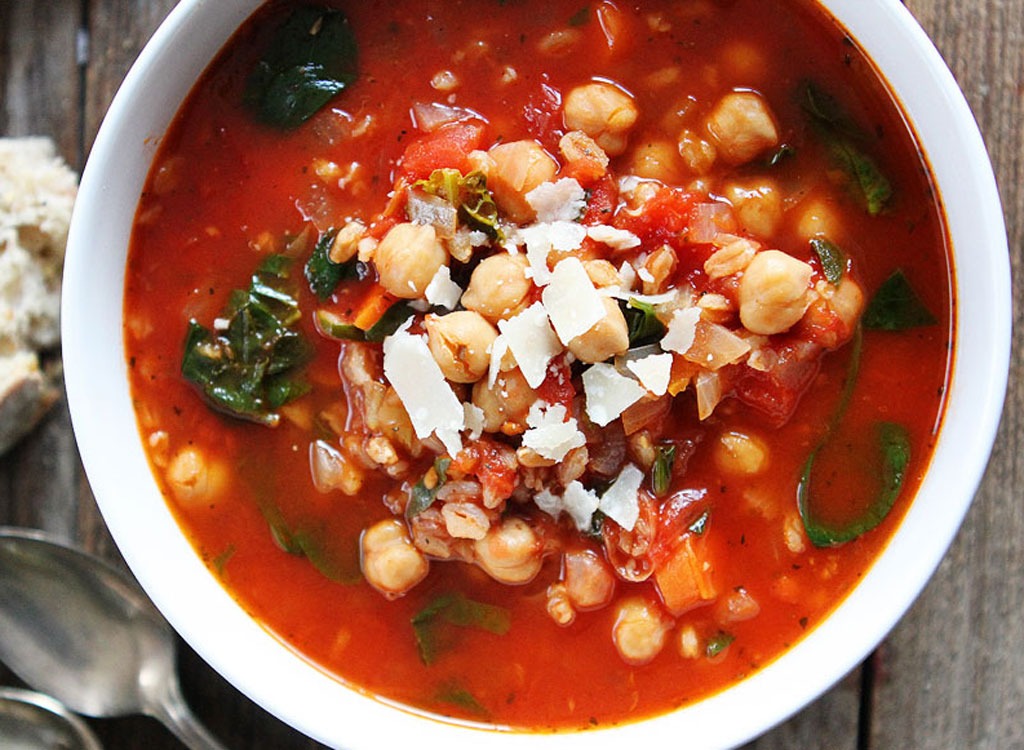 Farro can be thrown into just about any bowl of homemade soup (it adds a satisfying al dente bite), but we are totally swooning over the Chickpea Farro Soup pictured above. There're few things better than a savory mixture of tomatoes, Chickpeas, farro, onion, carrots and vegetable broth. Get the recipe here and pencil it into your fall meal-prep calendar stat!

Stuff it Into a Squash 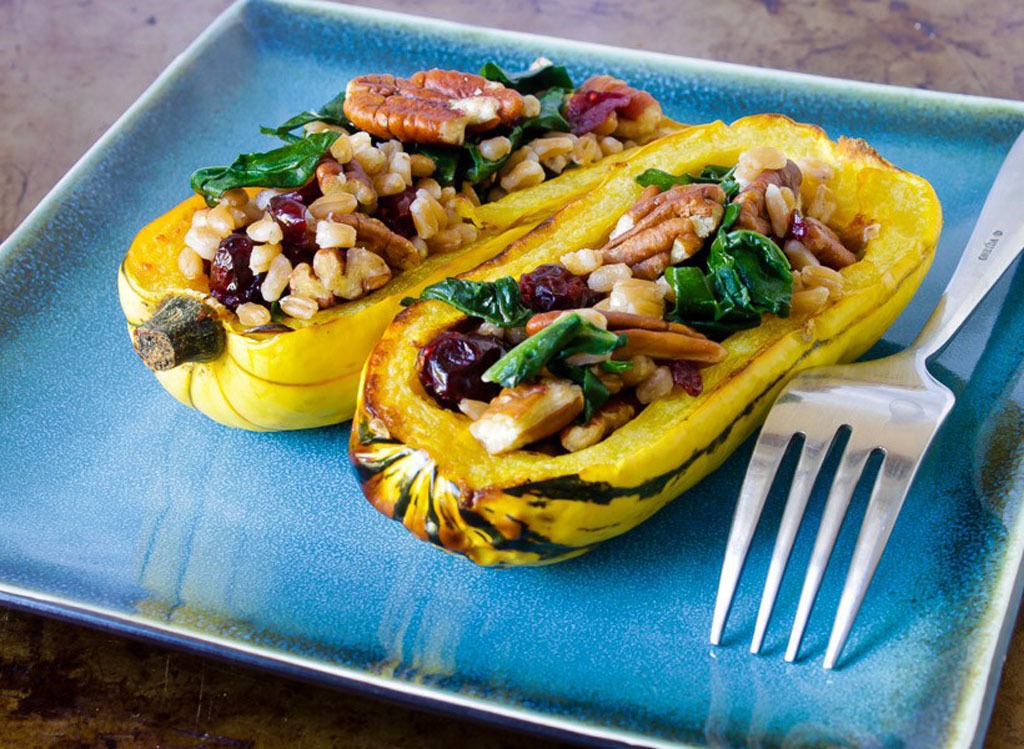 After recently trying stuffed spaghetti squash, stuffed eggplant, and stuffed peppers, I'm pretty much convinced that anything stuffed is bound to be delicious; there's just something really neat about eating out of a vegetable. And while I haven't personally dug into this farro-stuffed squash recipe (complete with kale, crunchy pecans, and dried cranberries) I can almost guarantee it will be a homerun in the flavor department. And since it uses two primo sources of protein (nuts and farro) it's the perfect meal to whip up on Meatless Monday or anytime you have a friend over for a meal who's a vegan or vegetarian. Get the full recipe from Lean Green Nutrition Fiend.

Pair it With Eggs 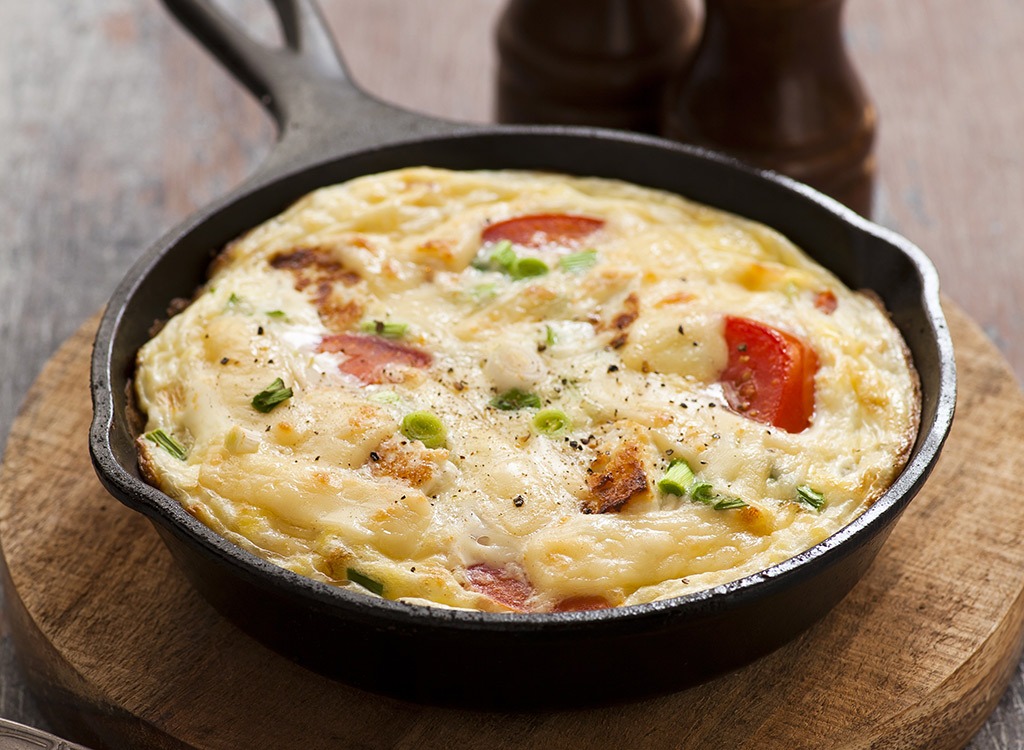 Top farro with leftover roasted veggies and runny eggs for a satisfying breakfast or brinner or simply serve your morning favorite omelet with the grain as a side dish instead of toast.For more tasty—yet simple—morning meal ideas, check out these 17 Breakfast Ideas Diet Experts Love.

Make it Into Veggie Burgers 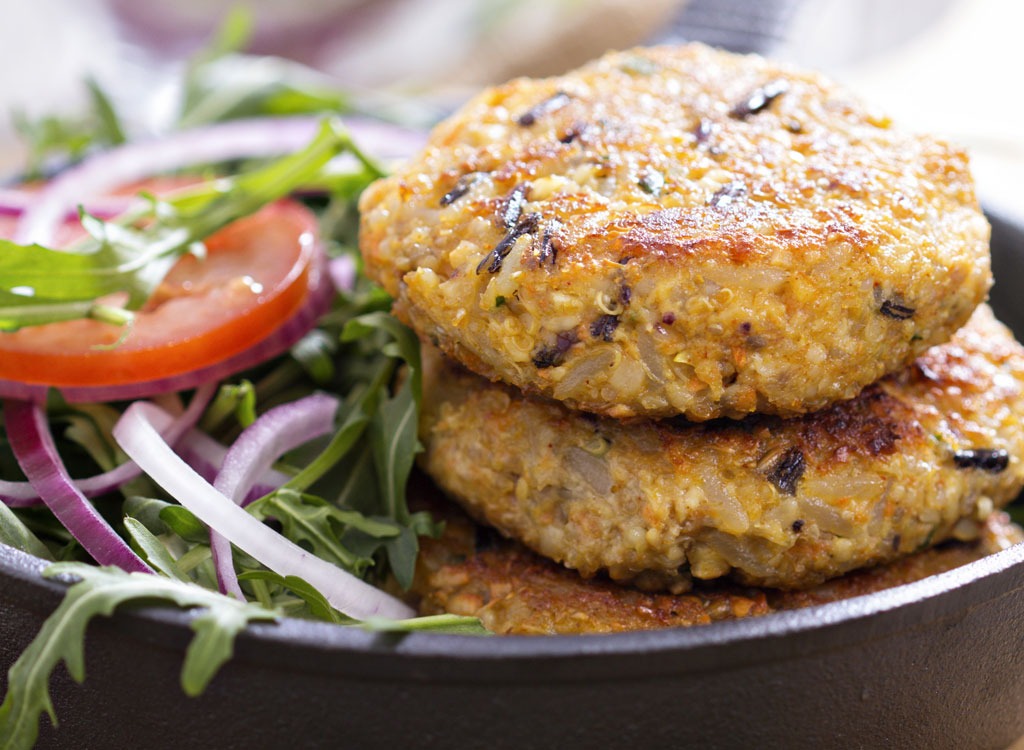 Thanks to its chewy texture, farro makes for an excellent veggie burger binder. We love how food blogger, Erin, of Olives for Dinner, pairs the grain with sweet potato, walnuts, and panko crumbs to create a patty even the most hard-core meat-lover is sure to adore. Snag her full recipe here.

Pair it with Zoodles 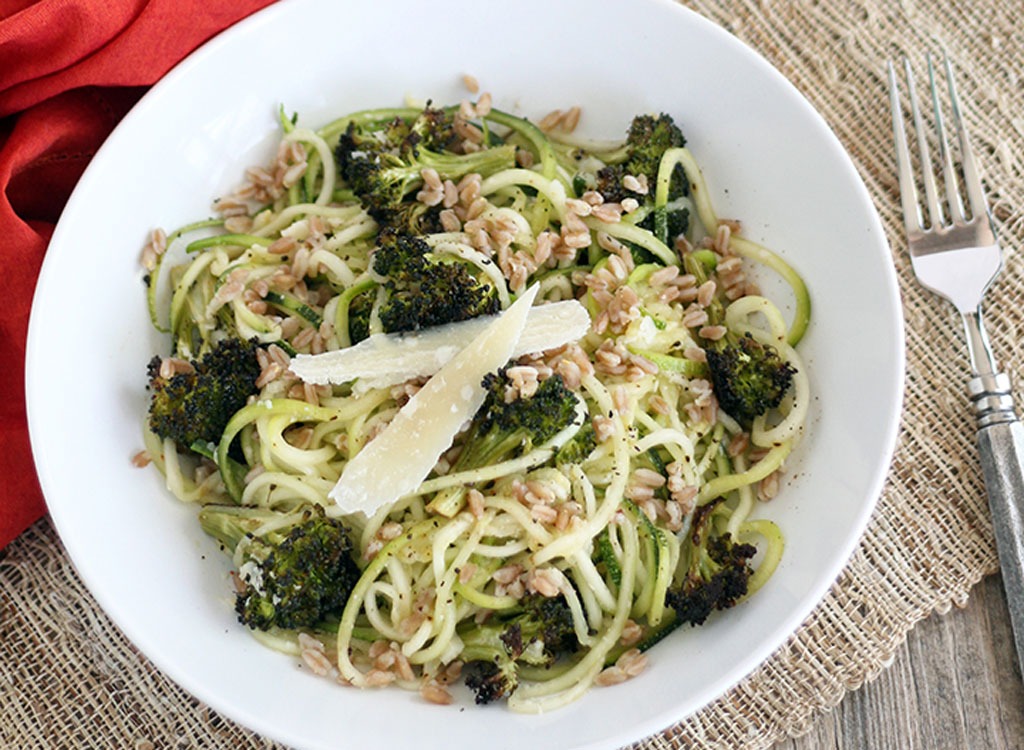 Zucchini noodles, AKA zoodles, are a savior for low-carb dieters. However, they leave much to be desired by pasta lovers—which is the very reason we're swooning over this farro-topped zoodle recipe. It has the starchy goodness of a pasta recipe while serving up far more veggies than the average carb-dish. When making this meal at home, you can even put out extra farro in a serving dish so that those who want to soup-up their dish with more carbs, can do so, while those looking for a lighter dish can simply use the farro as a nutty garnish. Get all the details on how to make the dish here.