6 Best Cheese Singles at the Supermarket, and 5 to Avoid

There's a big difference between cheese and "cheese food"—our nutritionist breaks it down.

Let's start off by defining what can and cannot be called "cheese". To the average consumer, a cheese slice is that yellow thing that goes in a cheeseburger or a grilled cheese sandwich, and melts to perfection. But the FDA (luckily!) has stricter criteria for cheese. For a product to earn the "cheese" label, it needs to be made with at least 51 percent real cheese.

The cheese singles category is particularly interesting when you start reading the ingredient lists on singles offerings at the grocery store. You'll notice that many don't qualify as cheese, and are therefore labeled "cheese food" or "cheese product".

To make even smarter choices when using cheese singles, try whole grain bread or buns for sandwiches and burger or if you're carb conscious, try bun alternatives. Serve up correct sizes of beef patties. Looking for more flavor? Pair sandwiches and more with pickles or a salad with sharp vinegar to balance out the cheesy flavor. Maybe the best option of all? Go talk to the deli counter and have them thinly slice you singles straight from a cheese with melty qualities!

How to pick the best cheese singles

The healthiest cheese singles you can buy These certified organic slices are pretty low calories, with only 60 calories a slice. They're with only three ingredients—organic cheddar cheese, salt, and microbial enzymes-non animal—so you know exactly what you're getting here. What helps these cheese singles stand out are several eco-friendly practices of the company itself. Horizon Organic has pledged to go completely carbon positive by 2025  (offseting all their carbon emissions), they've switched to wind energy in their production chain, and their farmers use healthy soil management practices. Now that's something we can get behind. 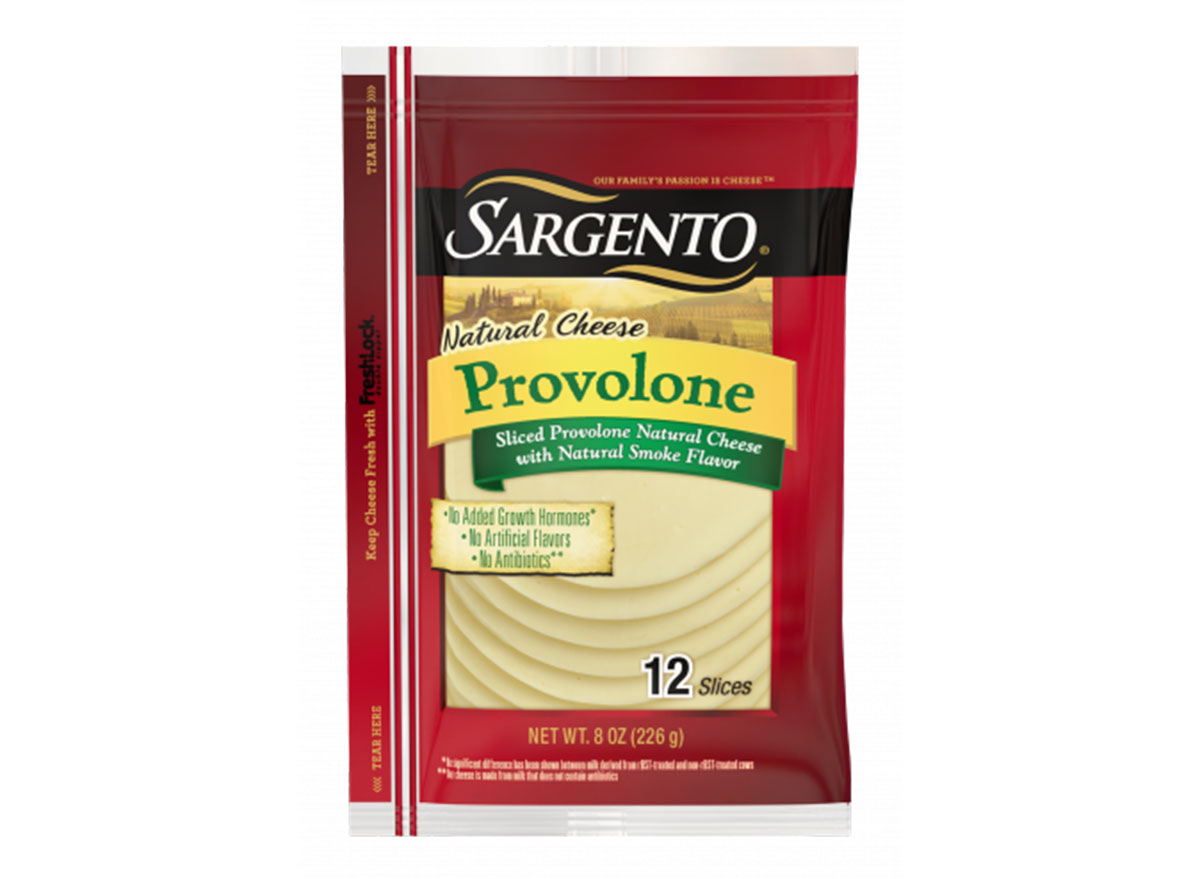 These cheese singles are straight up slices from a big piece of Provolone cheese. Right in line with many other singles, Sargento's sliced Provolone is 70 calories per slice with 5 grams of fat and a decently low 135 mg of sodium. Made with only milk, cheese cultures, salt, and enzymes, it's a really great option. Keep in mind, however, that there's an added natural smoke flavor in this cheese, so those that are sensitive to it will want to skip. 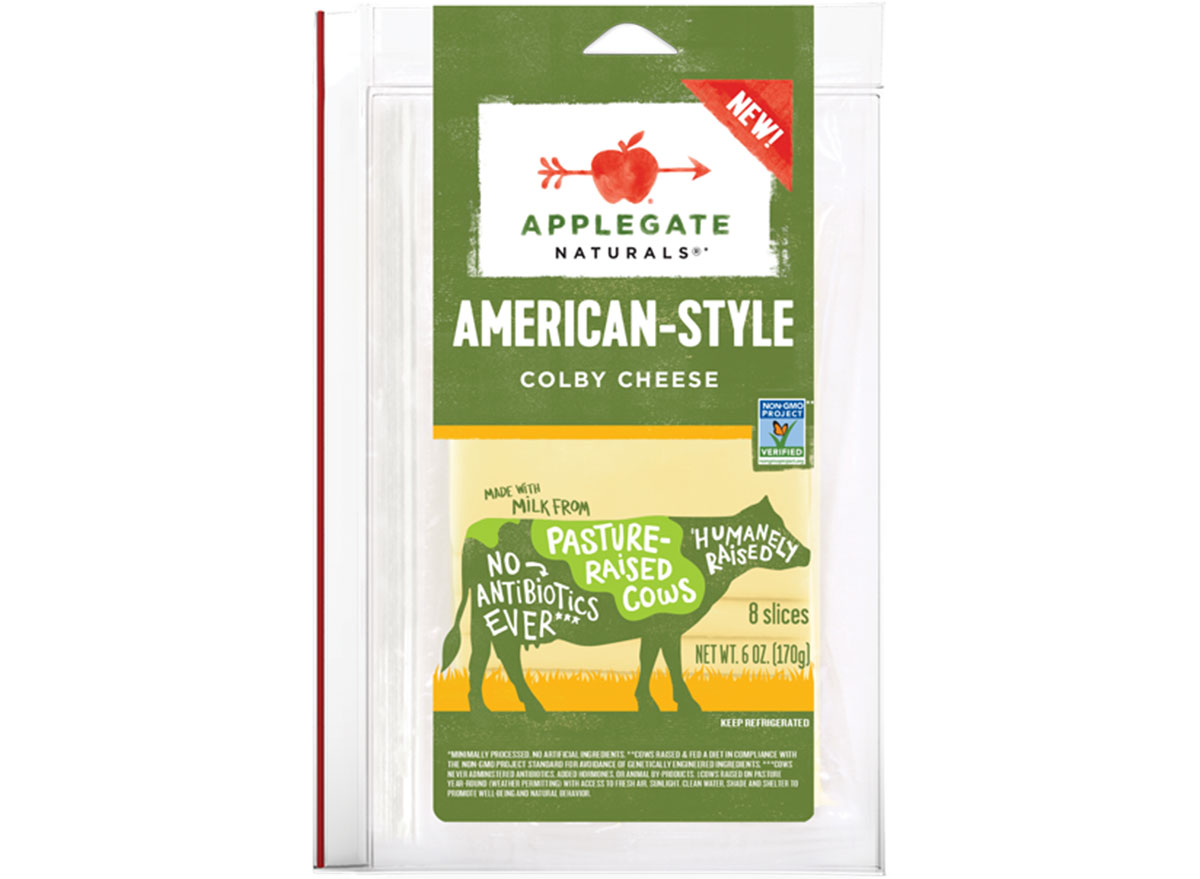 Applegate is made with ingredients as basic as they get: milk, cheese culture, salt, and non-animal enzymes. While these cheese slices have a bit more calories and fat then other same sized slices, they pull to the front of the pack with their lower sodium count and zero grams of carbs and sugar. Applegate is another company that puts a lot of stake in animal welfare and environmentally-friendly farming practices. 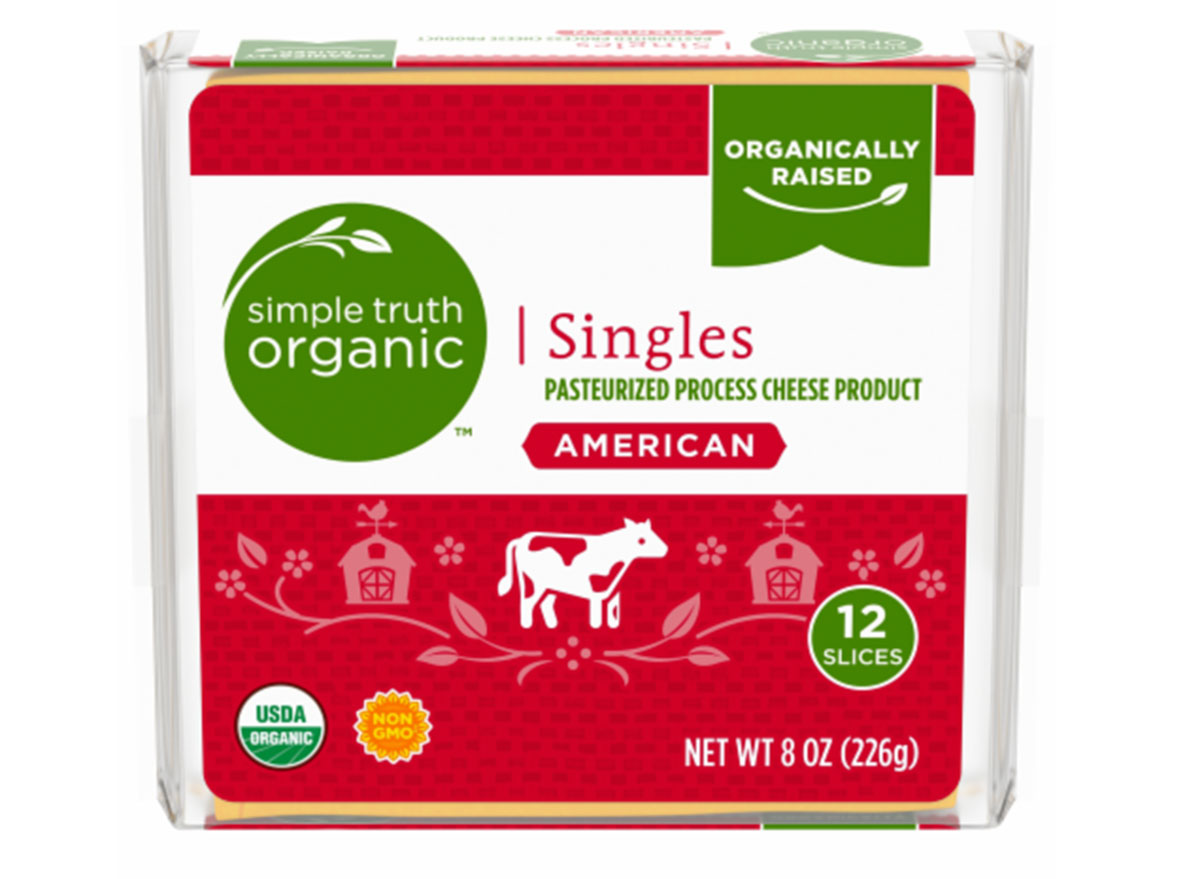 The products in Kroger's line Simple Truth Organic are true to their name—certified organic. Their American cheese singles are low in calories (60 calories) but do have a slightly higher sodium amount (240 mg). The ingredients in their sliced cheeses are pretty basic, but the ingredient list gets lengthier for more processed cheese singles like this melty American. However, If you're looking for true gooey American cheese singles you grew up with, they're usually going to be more processed, and this is a good option in the category. 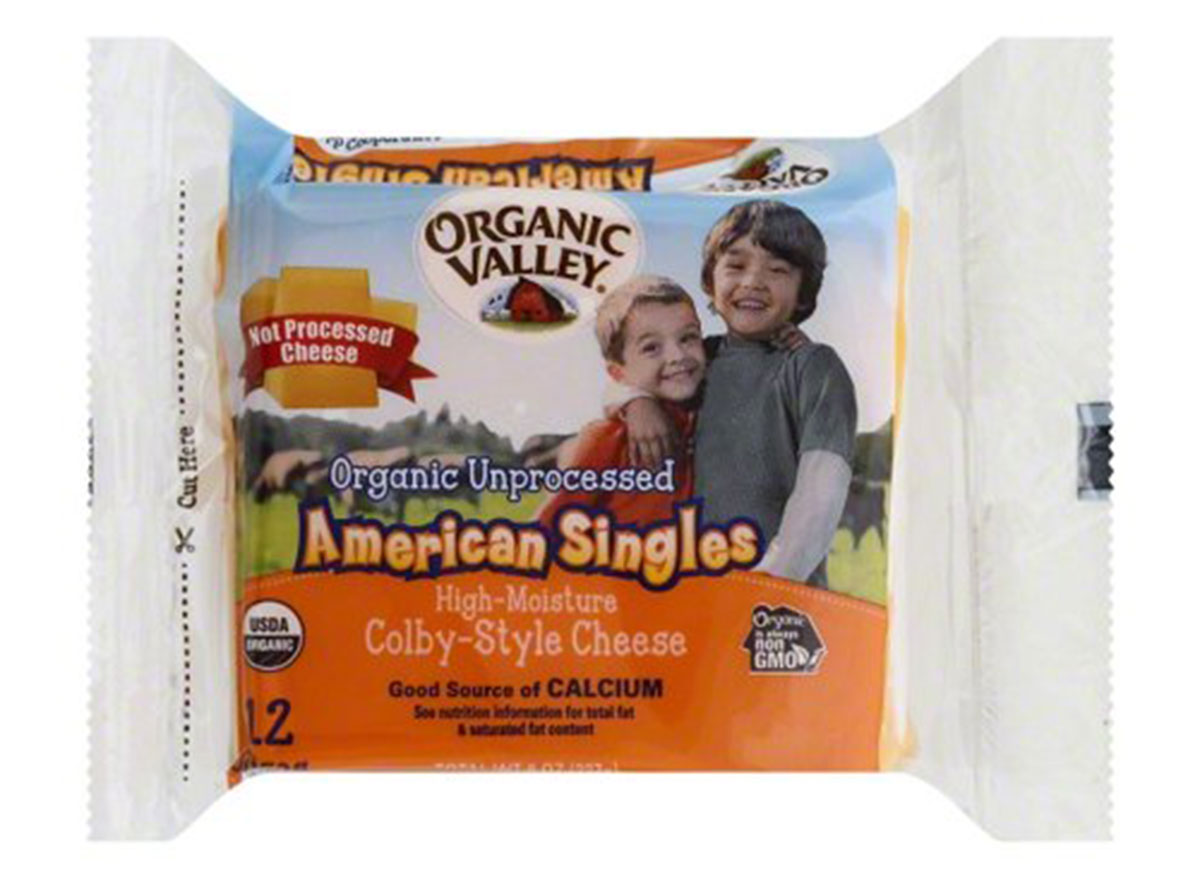 At first glance, it seems like these cheese singles are substantially higher in calories and fat, but you'll notice the serving size is about 50% bigger than other serving sizes on the list. It's worth noting that a bigger slice of cheese isn't necessarily better—you'll probably be just as satisfied with a smaller serving size and saving calories, fat, and sodium. The ingredient list is nice and simple, with the exception of one mystery ingredient: annatto. Annatto is a natural food coloring derived from the seeds of a tree grown in Latin America, only a very small percentage of the population may have an intolerance or allergy to it. 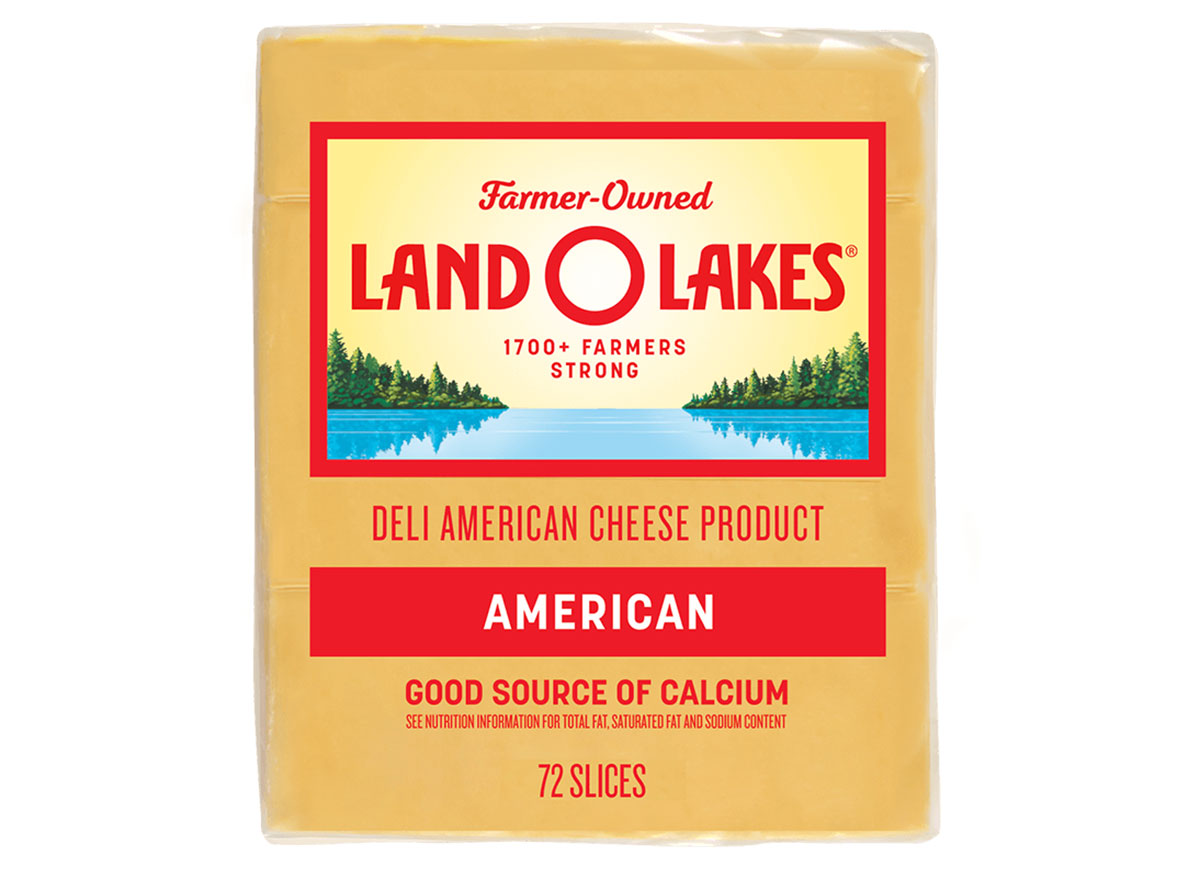 While the ingredients list here is still pretty short and simple, it's not quite on par with the top picks. That's why these cheese singles land smack in the middle of our list. Watch out for high levels of sodium (320 mg) and higher levels of fat. The ingredient list also contains sodium phosphate, which is often used for meltability in cheese singles, and food coloring from commercially synthesized carotenoids. While the inclusion of these ingredients isn't a deal breaker, it's also not completely necessary, which makes this a wasted opportunity for a cleaner product.

The worst cheese singles you can buy 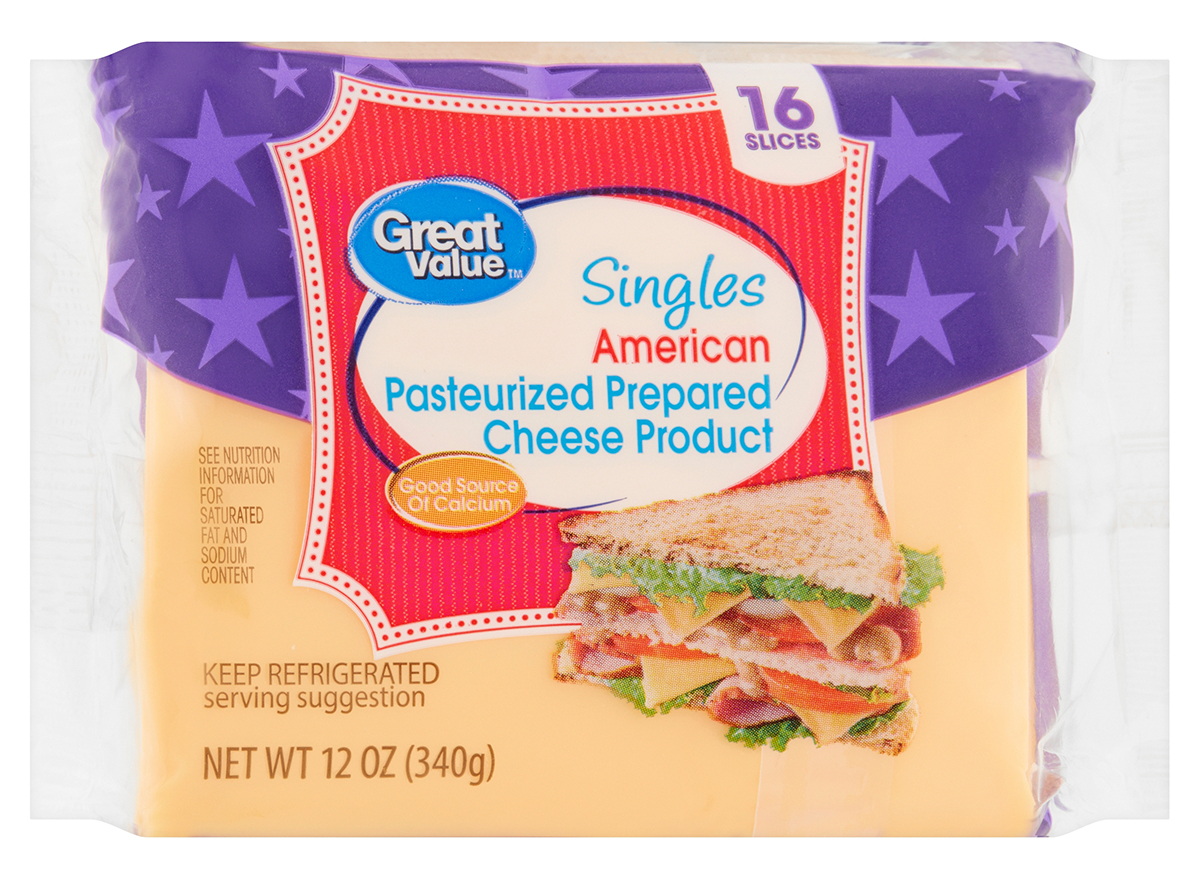 This highly processed option has high amounts of fat and saturated fat per slice, with only a small amount of protein. The ingredient list is where it truly gets awful. It's a who's who of cheap, low-quality fillers (like milk protein concentrate and whey protein concentrate) that make the singles melt better. Pass! 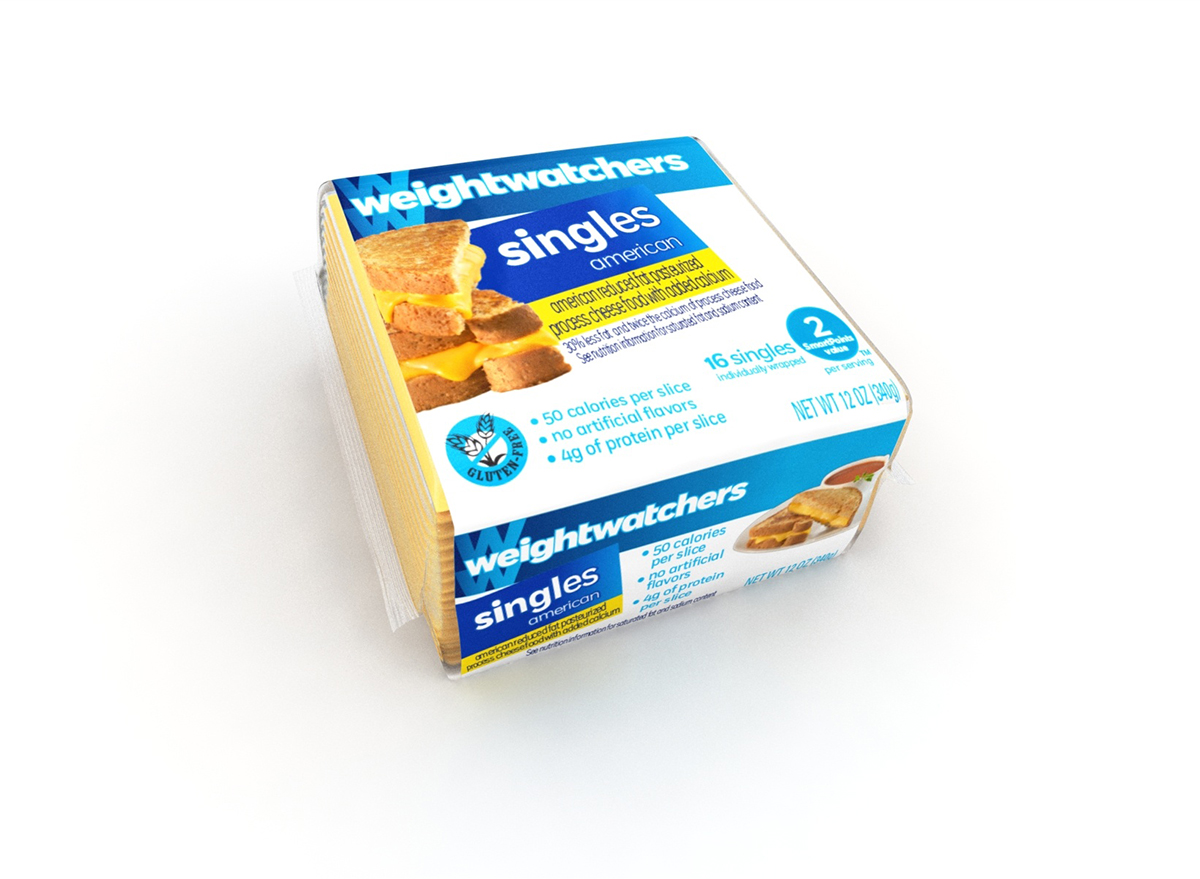 The description kind of says it all: "reduced-fat pasteurized process cheese food with added calcium."  It's not even cheese! Yes, yes, they've added calcium to it, but if you're looking to 'cheese food' for your daily intake of calcium, it may be time to reevaluate the rest of your diet. With a high sodium count (350 mg) and a subpar ingredient list, we recommend skipping at all costs. 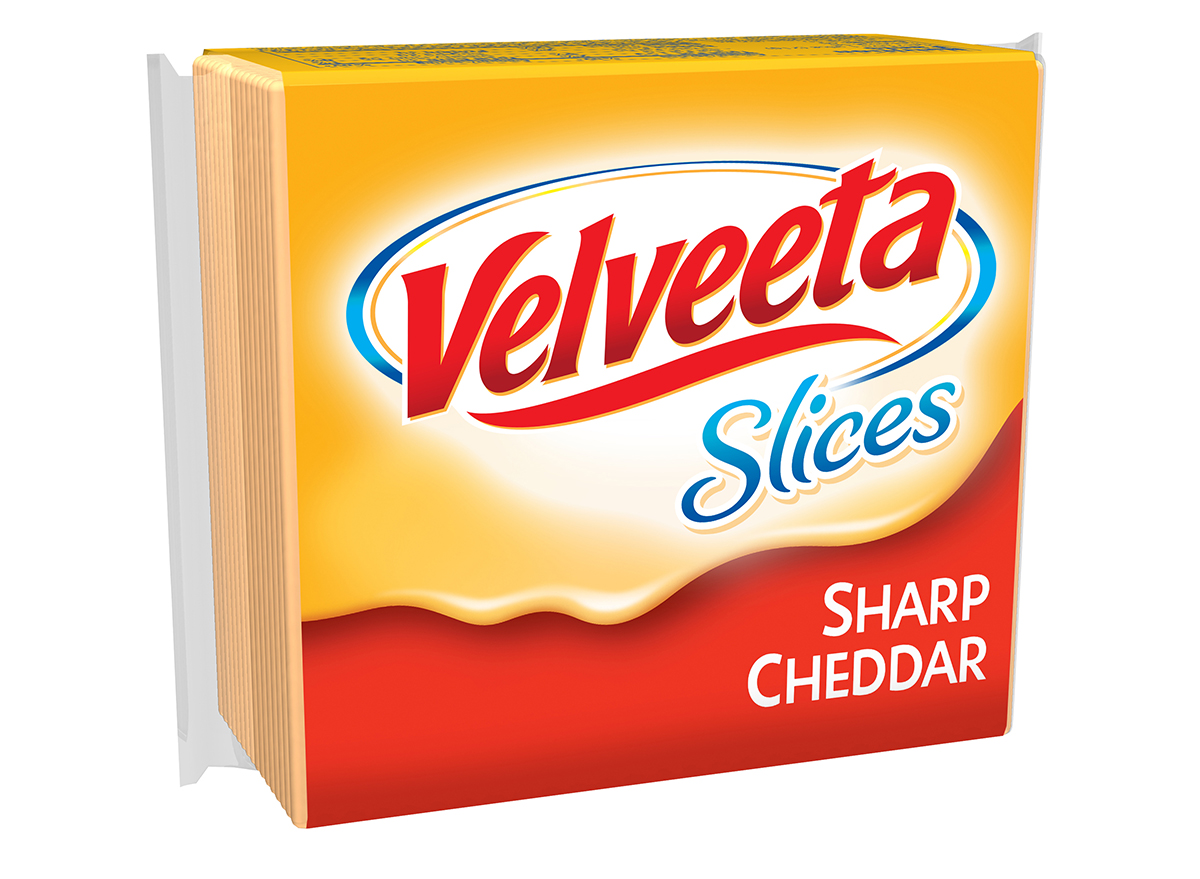 While this Kraft slice does have less calories and fat than your average American single, it does have substantially more sodium (320 mg) and a long and terrifying ingredient list. The first two ingredients of this slice are whey milk and milk protein concentrate, followed by modified food starch, gelatin. Are any of these things cheese? Move on.6254a4d1642c605c54bf1cab17d50f1e 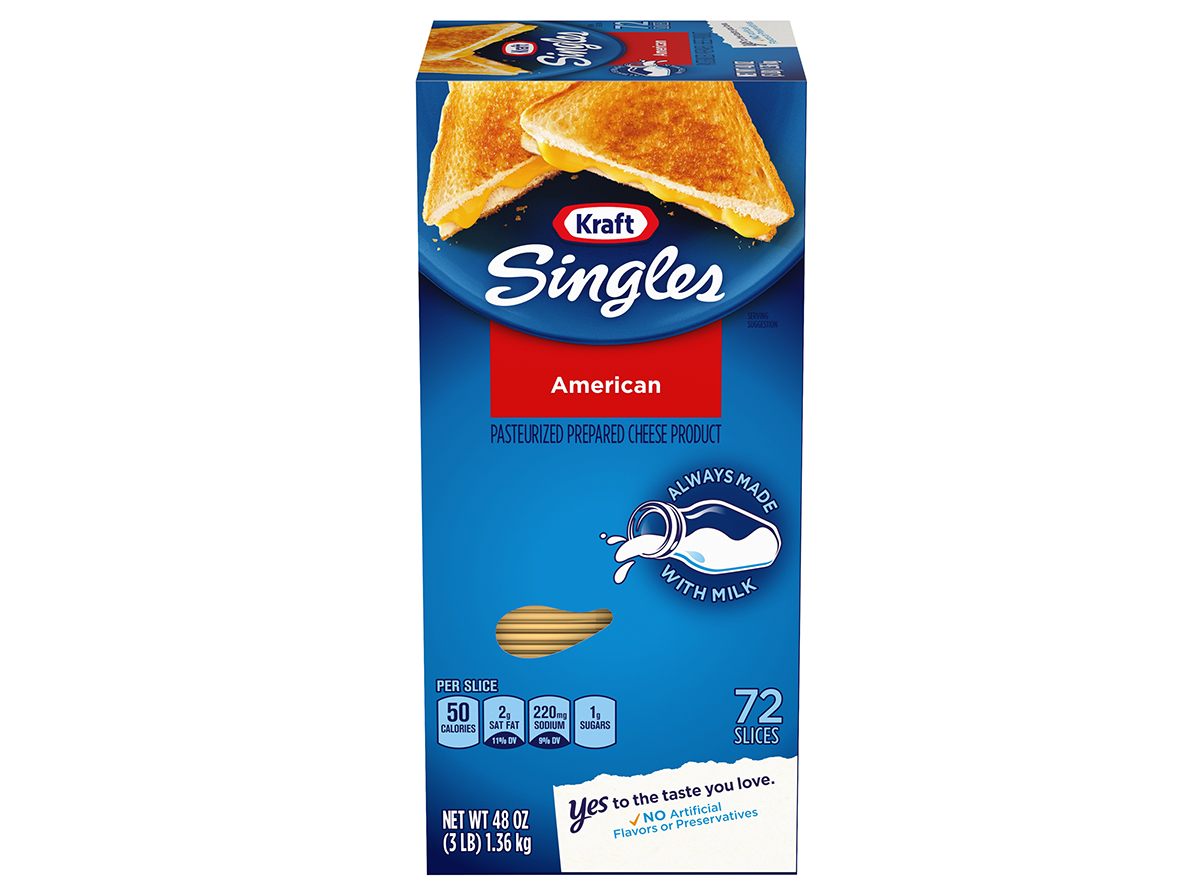 With one of the longest ingredient lists out there, these singles sound more like something that was grown in a lab than actual cheese. While you'll definitely recognize the first two ingredients—milk and cheddar cheese—it goes downhill form there. Milk protein concentrate, calcium and sodium phosphate, modified food starch, sodium citrate, as well as some (albeit) natural food colors . . . all the things you don't want in your cheese you'll find herewith. 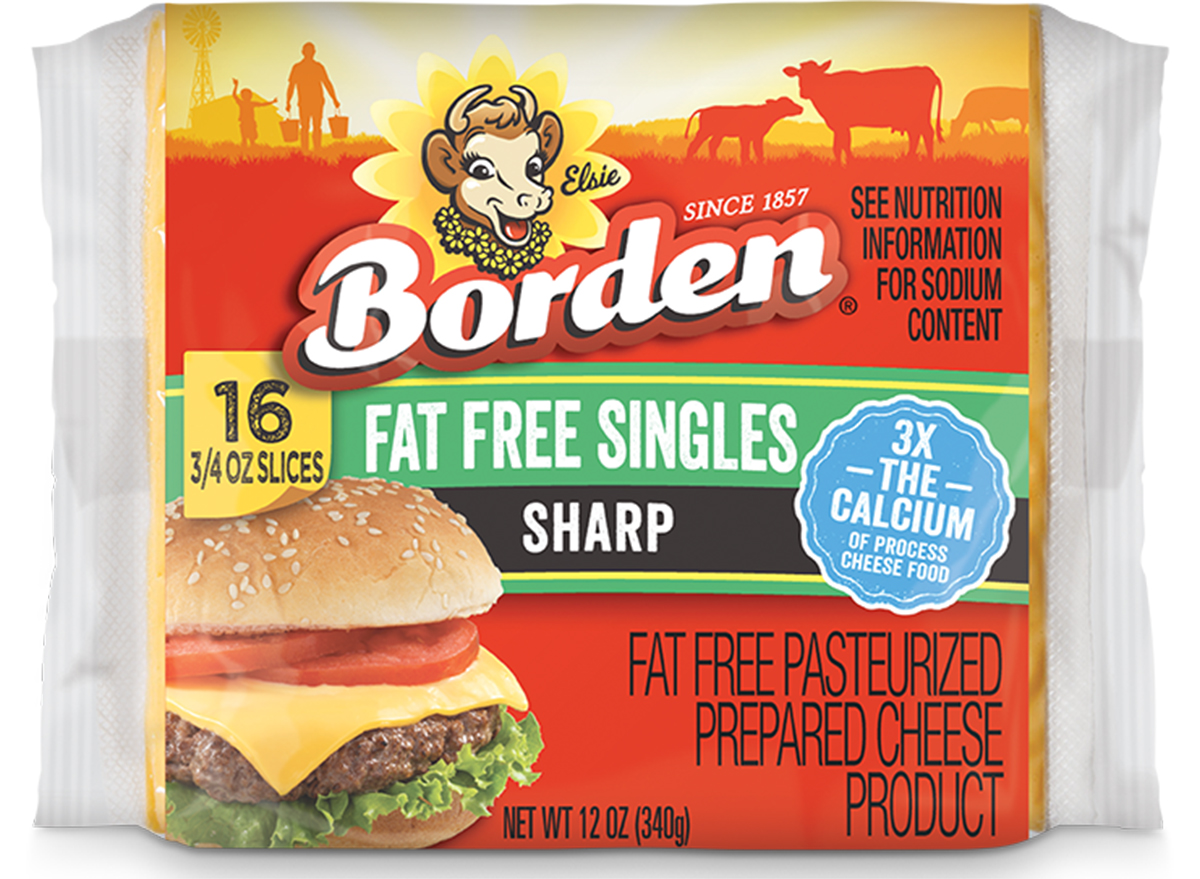 While this is a calorie-conscious choice, fat free isn't always better. In fact, to make up for the lack of fat, this cheese includes additions like corn syrup solids and gelatin, which make its texture and meltability similar to other cheeses. Hard pass.