The most effortless culinary tool and convenient breakfast combine.

If made correctly, oatmeal is an on-the-go breakfast that can sustain you 'til lunch, packing in slow-digesting carbs, metabolism-boosting protein, belly-flattening fiber, satiating healthy fats and essential nutrients. But if watching over boiling water doesn't fit into your morning routine, these crock-pot (or slow-cooker) oatmeal recipes will change your life. 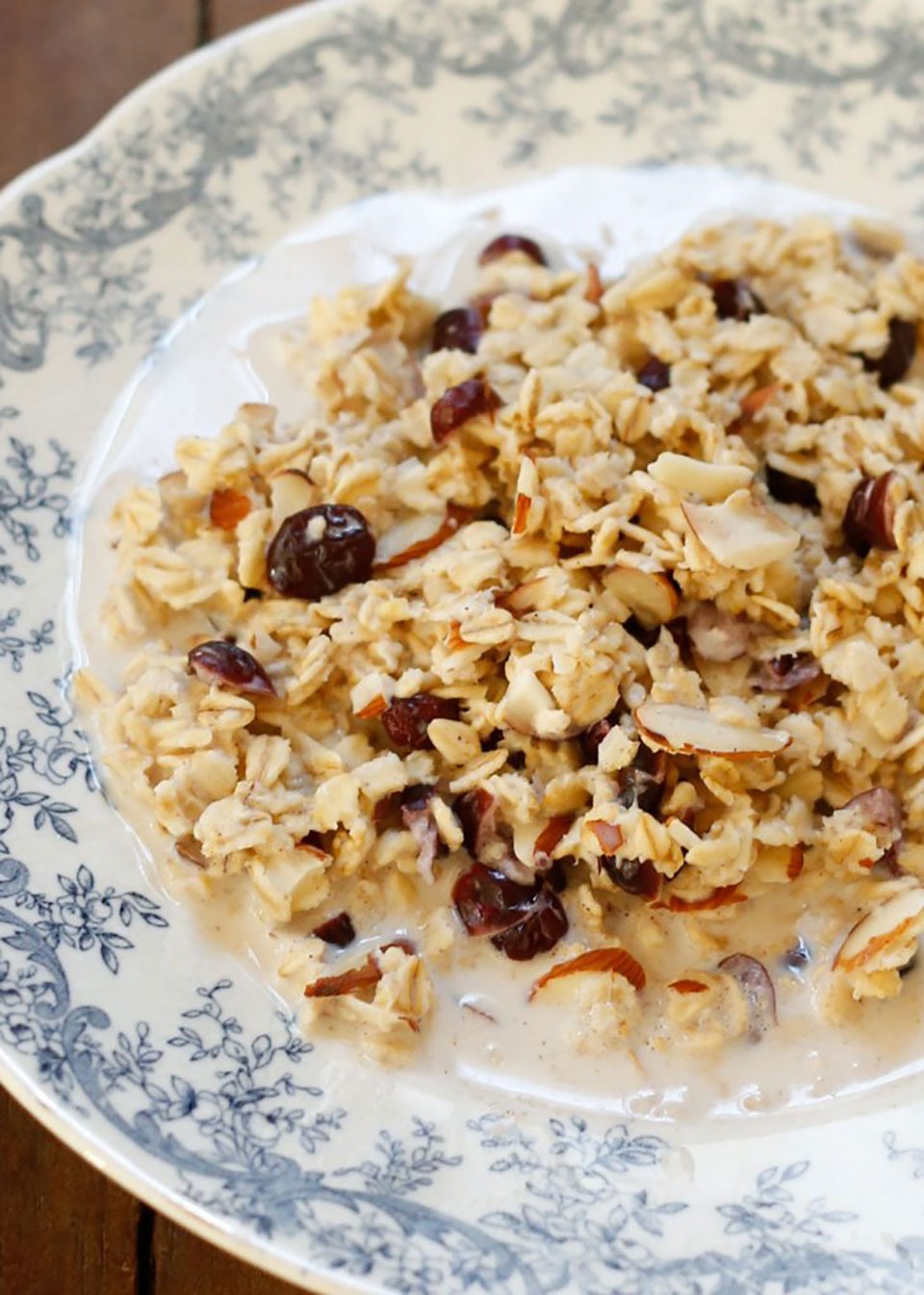 Cranberries don't get enough attention, aside from treating the occasional UTI. The tiny crimson beads improve oral health, reduce the risk for cardiovascular disease, increase immunity, and even fend off cancer, according to the American Institute For Cancer Research. Better yet, research has shown cranberries can potentially slow the progression of tumors. If that's not a reason to toss them into your daily oats, you'd better reread this.

Get the recipe from Barefeet In The Kitchen. 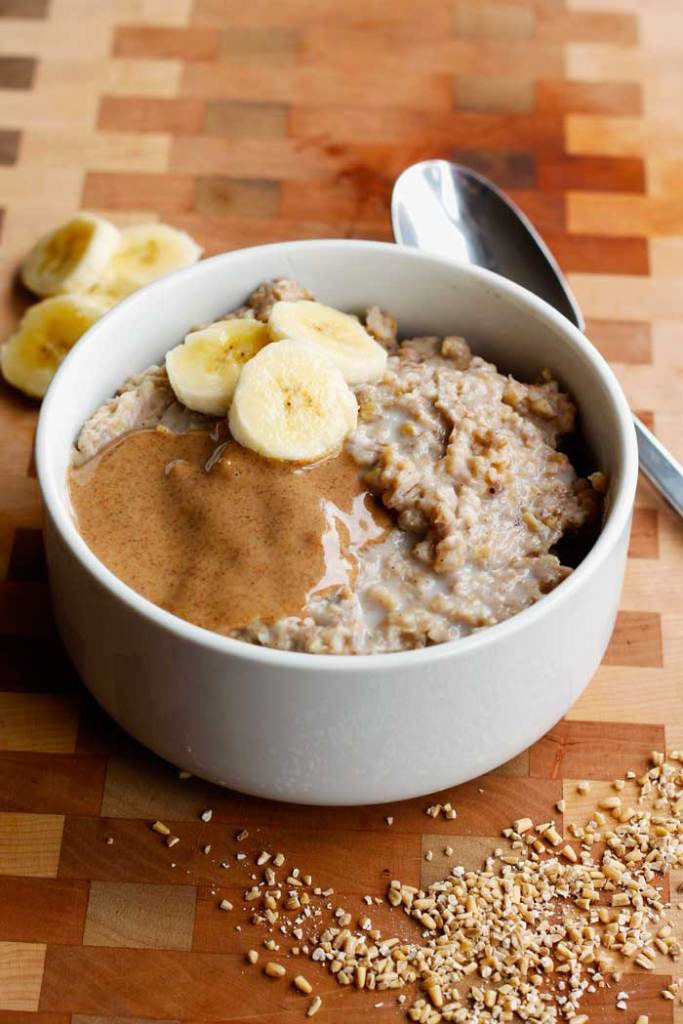 Peanut butter and banana are a duo made in heaven — taste-wise, nutrient-wise and just about everything in between. Packed with slow-digesting complex carbs, heart-healthy potassium and satiating protein, the combo does wonders for a fit bod. Not to mention slaying your risk for diabetes, cinching your waist and turning off fat genes — there are clearly worse addictions than peanut butter. There is just one thing, and it is major: Choosing the right brand. Check out these The 36 Top Peanut Butters—Ranked.

Get the recipe from Smile Sandwich. 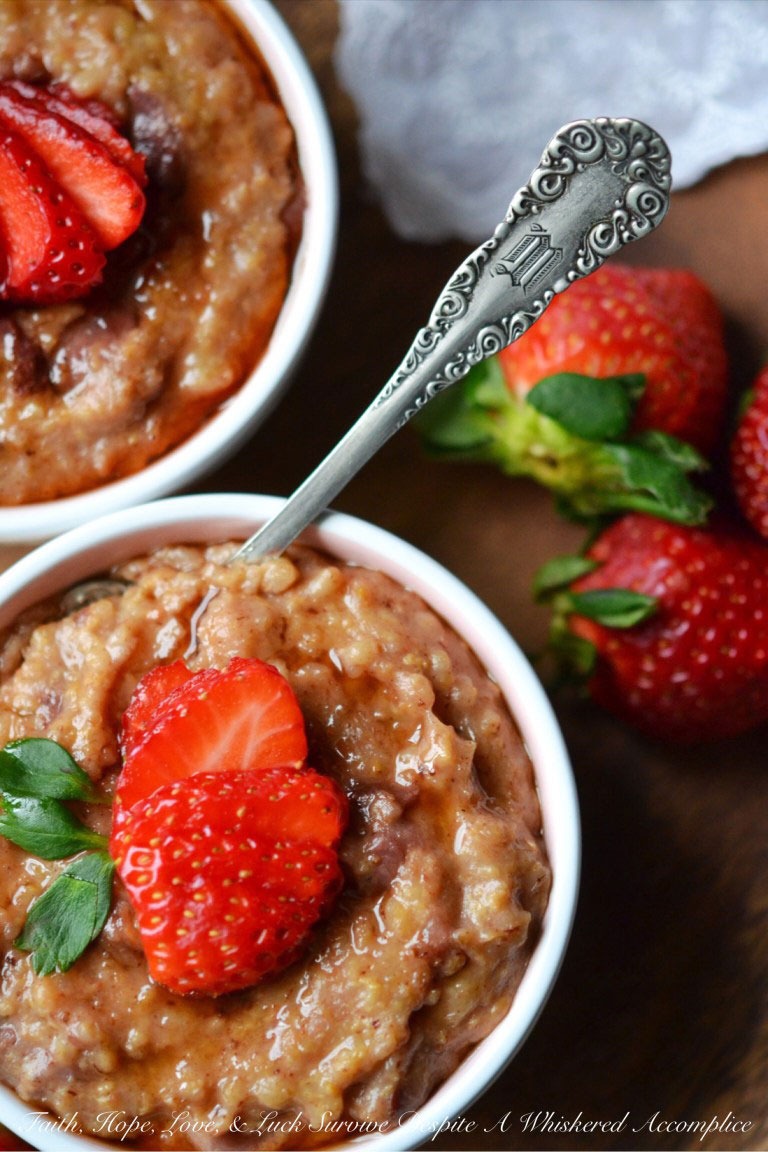 Light brown sugar and heavy whipping cream make this one a little more desserty, but for just 157 calories and just 8.6 grams of sugar, it's a little indulgence we can get behind.

Get the recipe from Faith, Hope, Love and Luck Survived Despite A Whiskered Accomplice. 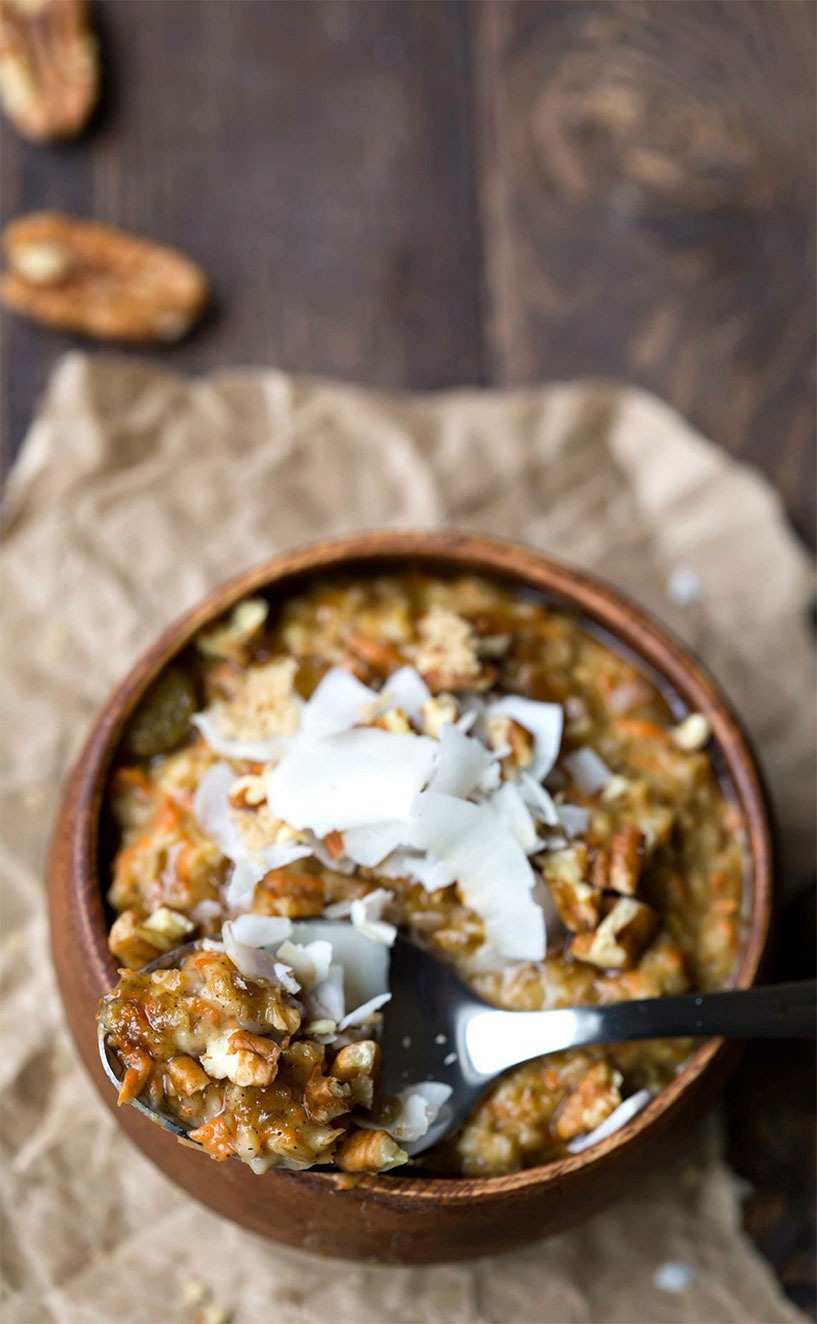 Cake for breakfast sounds like the biggest dietary sin next to memorizing the McDonald's Menu. This, however, isn't your typical slice. Packed with raisins, cinnamon, nutmeg, coconut milk, steel-cut oats and carrots, it's brimming with nutrients that'll do everything from blasting fat to boosting energy. And while you probably know carrots for their vision-preserving reputation, they have a lot more to offer. The (usually) orange vegetable boosts immunity, promotes vibrant skin, and reduces cholesterol, among other things.

Get the recipe from I Heart Eating. 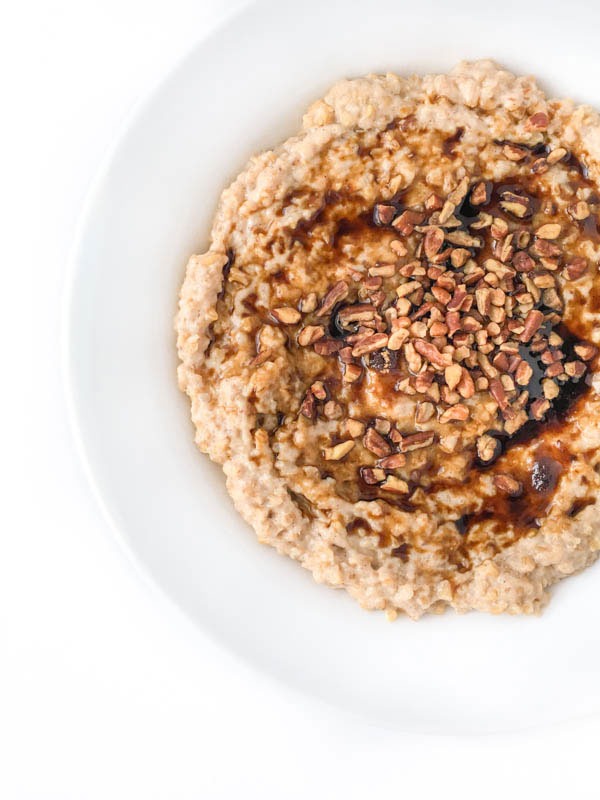 Mmmm … gingerbread. Molasses, nutmeg, ground cloves, vanilla, and cinnamon — all the warm and cozy flavors of your favorite cookies. Why not enjoy them in your oatmeal? Ginger calms an upset stomach, nutmeg detoxifies the body, cinnamon lowers blood sugar and molasses is packed with inflammation-fighting antioxidants. Talk about a healthful way to start your day.

Get the recipe from The Lemon Bowl. 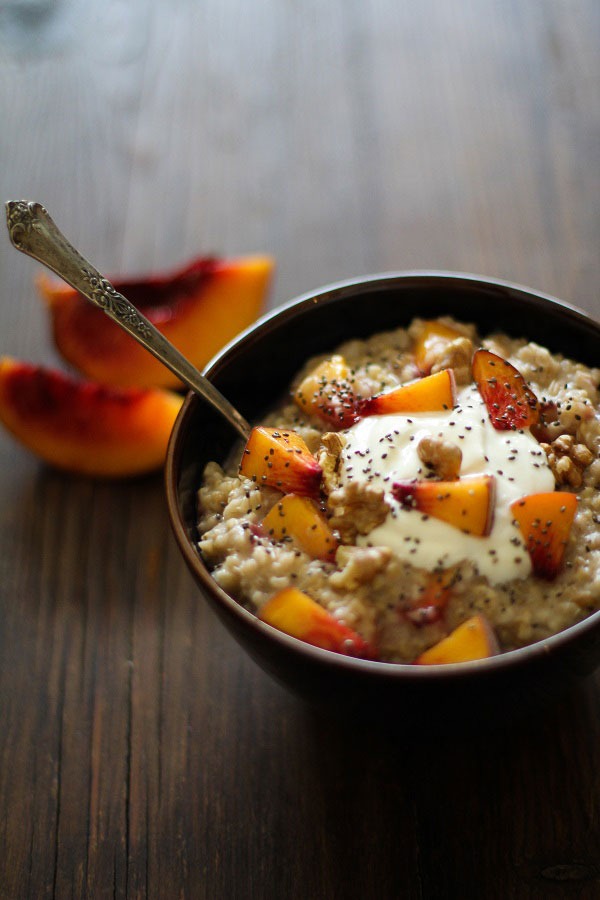 Although the fat count in this recipe seems high, it comes from coconut milk, chia seeds, and walnuts — three foods that blast fat, support a healthy weight and boost heart health. The duo of medium-chain fatty acids and omega-3 fatty acids — specifically alpha-linolenic acid (ALA) — fight inflammation, metabolize fat, improve energy and endurance and much more. This is not a bowl you want to shy away from.

Get the recipe from The Roasted Root. 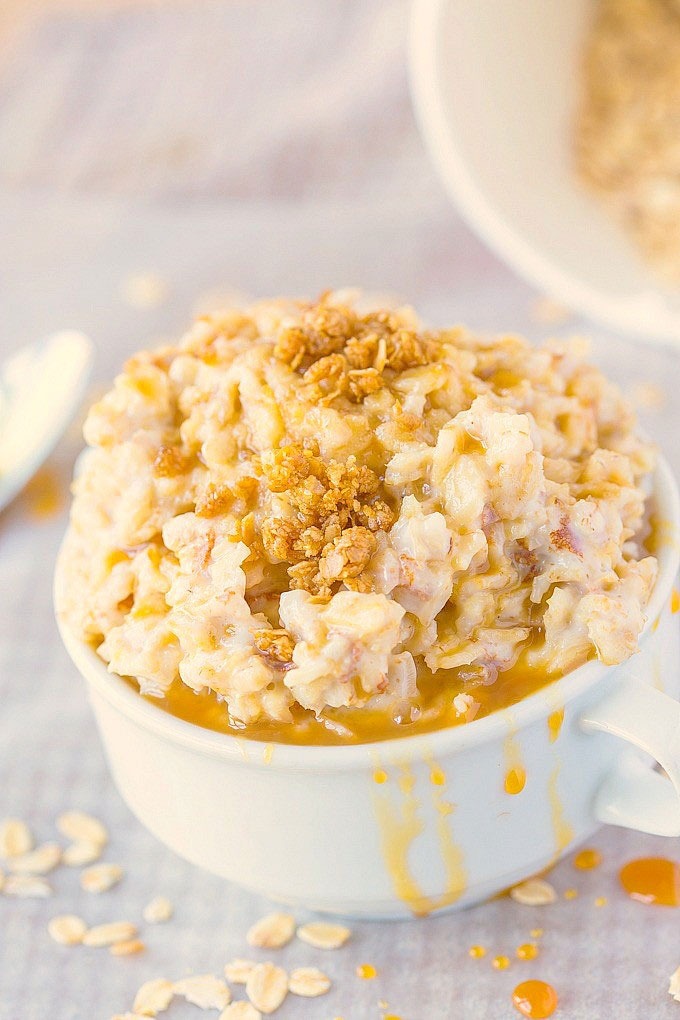 Skip the Starbucks frapp. This caramel-mocha combo contains slow-digesting carbs, flat-belly fiber and satiating protein. To lower the sugar count, opt for ½ cup of brown sugar. This bowl has a ton of flavor, so you won't even miss the extra sweetness.

Get the recipe from The Big Man's World. 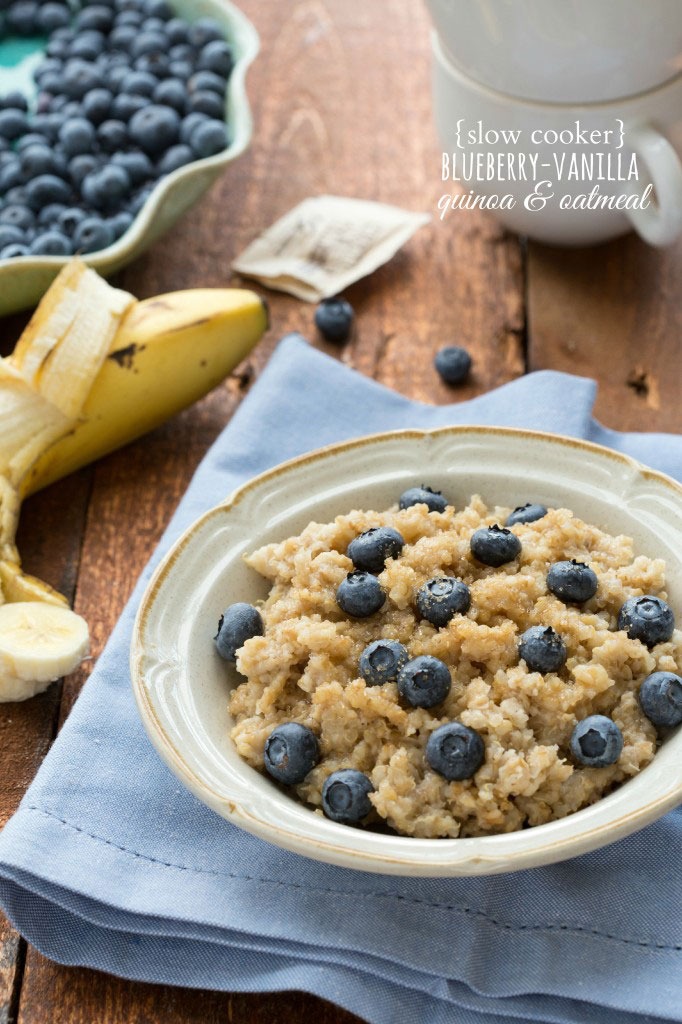 Quinoa in your oatmeal? Probably not the first thing that comes to mind when you think of the superseed, but the crunchy, nutty taste blends flawlessly into your oats. Packed with lysine, an essential mineral for healthy tissue, along with riboflavin, magnesium, iron, and twice as much belly-slimming fiber as other grains, the complete protein is an effortless way to boost your morning fuel and slay your body goals.

Get the recipe from Chelsea's Messy Apron. 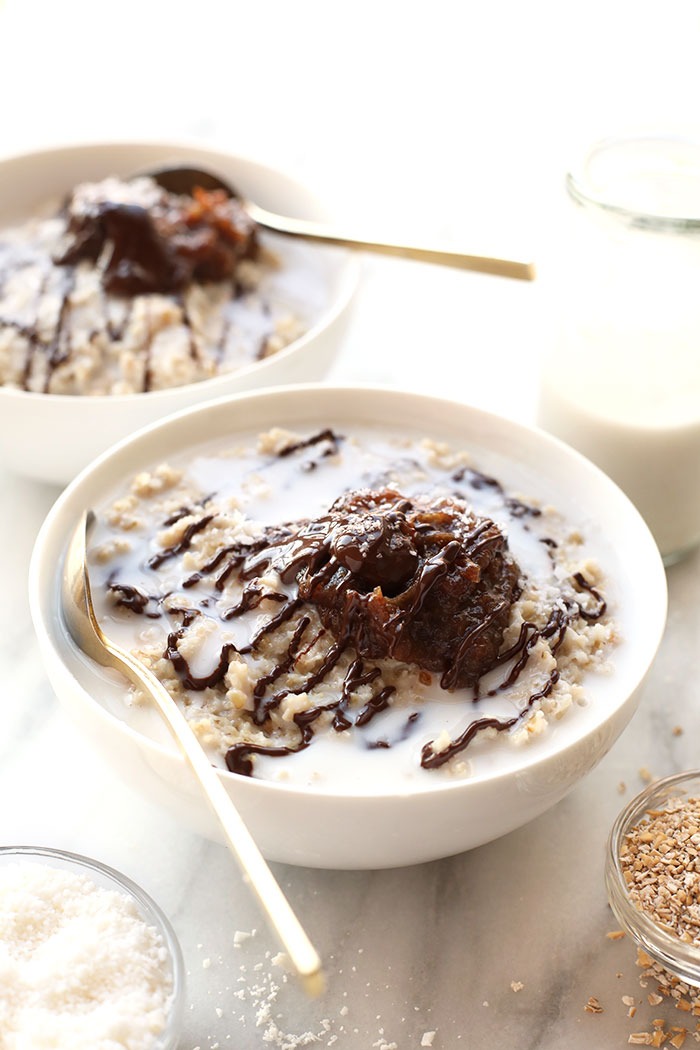 Get the recipe from . 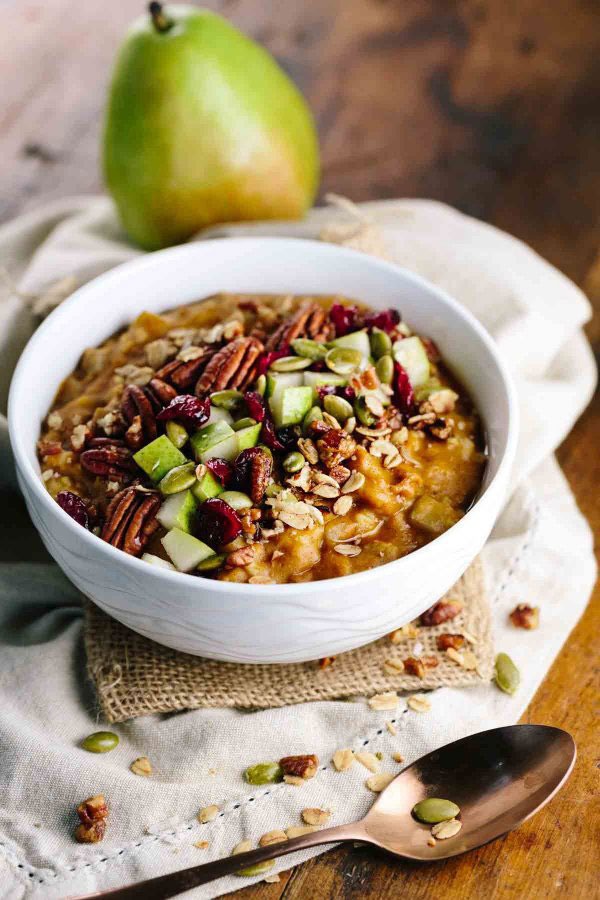 There's a beautiful thing about pumpkins that not every squash can offer us — year-round, uncompromised accessibility. Whether you buy it straight off the vine in October or pureed in a can in March, the gourd is a natural appetite suppressant, vision protector, fat-burner and skin tanner. Fortunately, there's no shortage of ways to use it, so whip it up, then check out these 20 Healthy Pumpkin Recipes for Weight Loss.

Get the recipe from Jessica Gavin. 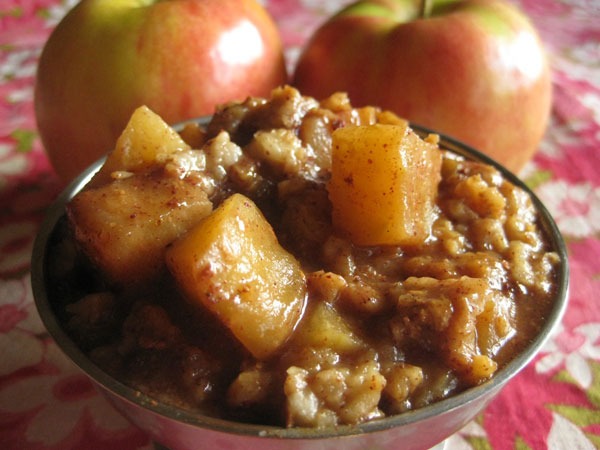 An apple a day does more than keep the doctor away. In fact, scientists at the University of Western Australia found it may reduce the risk of dying early by 35 percent. What's more, the once-forbidden fruit fights obesity, thanks to a compound called ursolic acid that's believed to increase muscle and brown fat, a good fat that cranks up calorie burn. But there's a catch: Ursolic acid is found solely in apple peels, so don't ditch them when you're whipping up this one.

Get the recipe from Nourishing Joy. 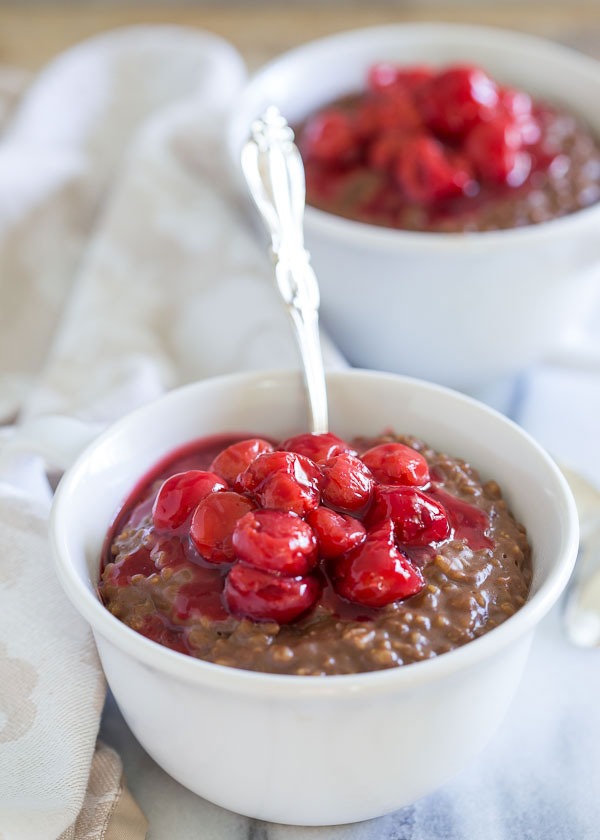 If you're stressed out (which is basically everyone), this pot has your name all over it. According to research, regular consumption of dark chocolate can lower levels of the stress hormones cortisol and catecholamines after just two weeks. But before you go stock up, keep in mind this is only true when you practice portion control (no more than an ounce a day). Consuming copious amounts will cause your blood sugar to spike and crash later, leaving you lethargic and counteracting any mental health benefits.

Get the recipe from Running To The Kitchen. 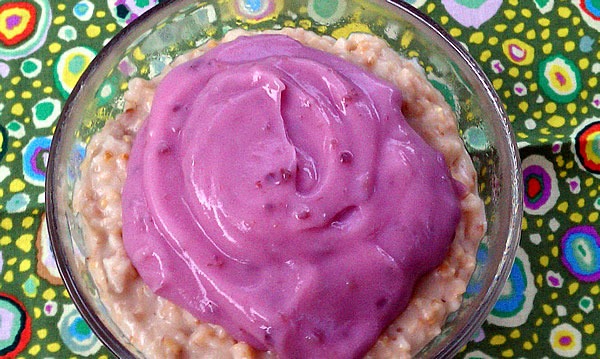 You had us at cheesecake oats, but from a nutritional standpoint, we're impressed. Just under 150 calories, with 18 grams of slow-digesting carbs and 7 grams of satiating protein, this bowl will keep you full long after breakfast. Shout out to Greek yogurt for tricking our palates once again.

Get the recipe from Healthy Slow Cooking. 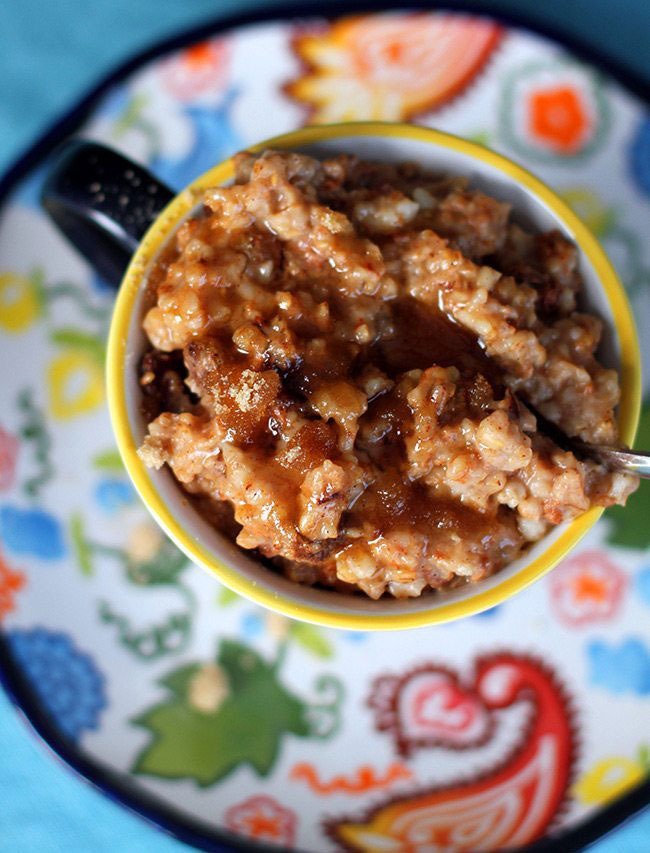 All you need to create a creamier version of your favorite cereal is oats, milk, raisins, brown sugar and cinnamon.

Get the recipe from The Kitchen Magpie. 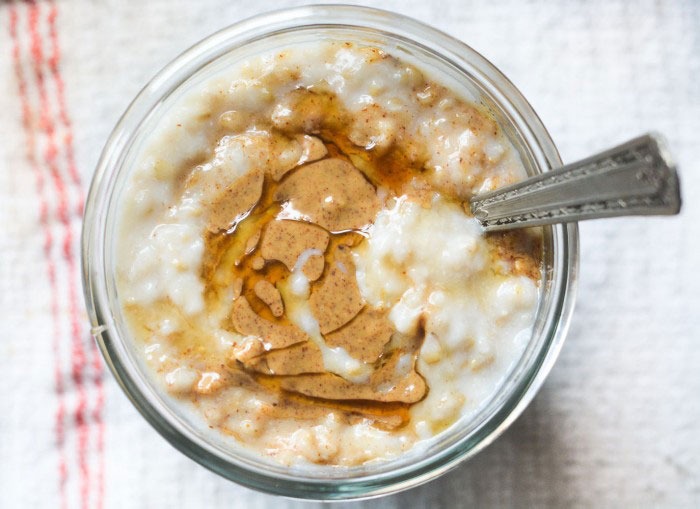 Thanks to the amino acid L-arginine, almond butter is a muscle-building, belly fat-blastig superfood. For optimal results, eat this bowl before you hit the gym. A study printed in The Journal of the International Society of Sports Nutrition found that consuming almonds (or in this case, almond butter) prior to exercise can actually help you burn more fat and carbs during workouts.

Get the recipe from The View From Great Island. 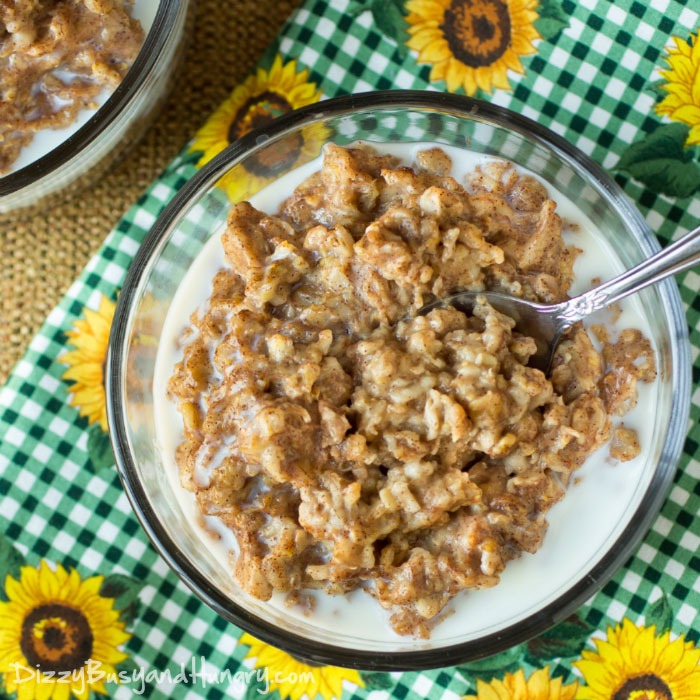 According to researchers, cinnamon contains an active ingredient called cinnamaldehyde which works as a blood-sugar balancer by stimulating insulin receptors on cells and allowing excess sugar to move out of the blood. Whether you're fighting diabetes or just trying to lose a few pounds, a stable blood-sugar level are extremely important. And that's not all the spice does. In fact, the Journal of Nutrition found that when consuming a meal with cinnamon boosts antioxidant activity by 13 percent and decreases insulin response by about 20 percent!

Get the recipe from Dizzy Busy and Hungry. 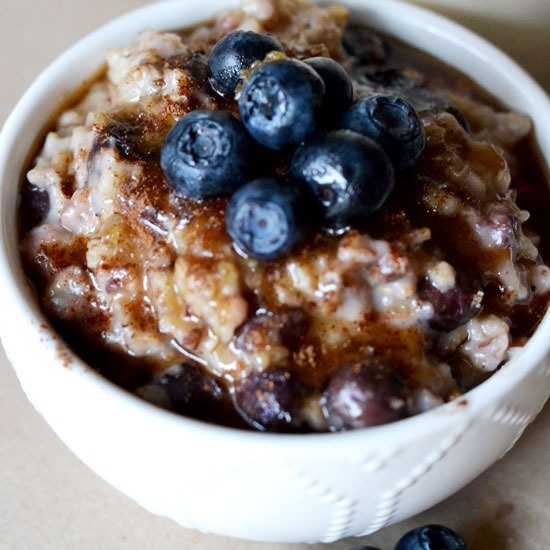 Even the least health-conscious know that muffins are the surest way to a muffin top. But this oatmeal version just might nix your next hankering for one. And researchers at University of Michigan found that blueberries can help you lose belly fat by turning on your get-lean genes. After a 90-day trial, rats fed a blueberry-enriched diet showed significantly reduced abdominal belly fat than the control group. Stock up now.

Get the recipe from Simple Hacks Living.