For better or worse, we dug into nutritional labels and ingredient lists of the most popular foods.

Nutritionists tell clients to read the nutrition labels and the ingredient lists for good reason: There's usually a whole lot of junk listed out into words that are both hard to pronounce and spell. It's a surefire way to know a food is packed with, well, more than what you bargained for. Here, we reviewed the ingredient lists of some of the most popular packaged and pre-made foods.

From crushed up, bugs to flame retardants (yes, really.), read up on 30 ingredients to look out for the next time you're grocery shopping. Then, read up on the 23 Worst Food Additives in America to help you lose weight and kick processed foods for good.

It sounds gross, but the practice of spraying viruses on foods was approved in 2006. The Food and Drug Administration (FDA) had foods like salami, sausage, and other deli meats sprayed with bacteria-killing viruses.

The FDA's Defect Levels Handbook (don't read it if you don't want to be grossed out) lists the "allowable limits" on natural or unavoidable defects in more than 100 popular foods. Macaroni and noodle products, for example, can contain an average of 4.5 rodent hairs (or more) for every 225 grams in six or more subsamples. While that's not the average amount of insects or rodent hairs in these products, that number is what the FDA allows so there's a chance you're eating more than you realize.

Demonized HFCS is a not-so-natural sugar made from corn syrup and you don't want to overdo it. The ingredient is linked to everything from type 2 diabetes and weight gain to metabolic syndrome. The European Union limits its use but in the States, you'll still find it in everything from applesauce to soda and even ketchup. 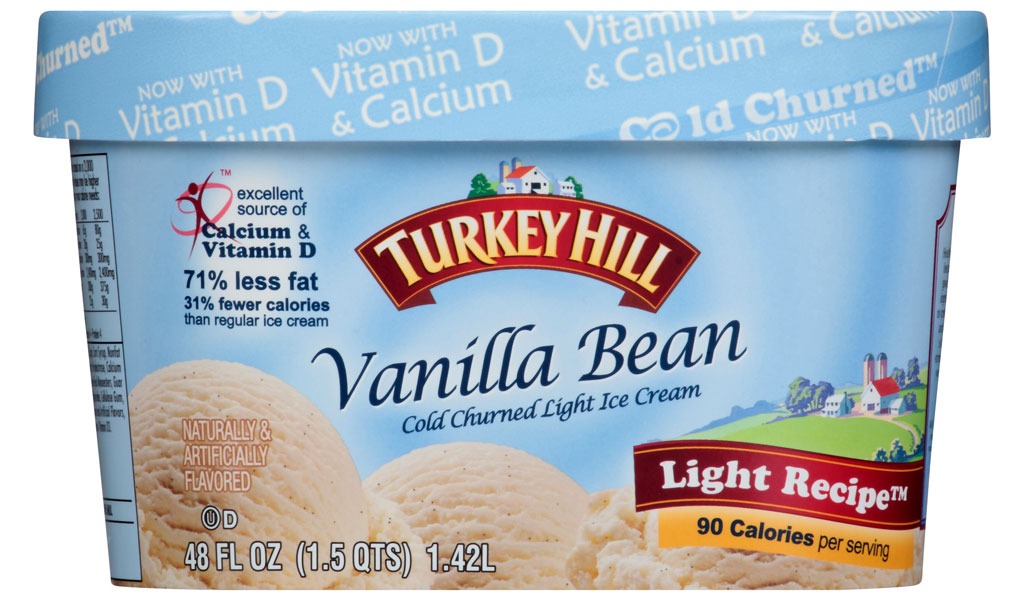 Propylene glycol is an additive that is often used in acrylic architectural paints. In food, it's used to help preserve moisture in brands such as Turkey Hill Vanilla Bean Light Recipe, and other diet ice creams to make them more "scoopable."

Potassium bromate in flour allows bread to rise higher and it gives it a fluffier texture. The FDA allows the ingredient in foods, despite the Center for Science in the Public Interest petitioning a ban and Europe's claims that it can cause cancer and be toxic if swallowed. Research from the Centre for Science and Environment suggests that potassium bromate is still found in Harvest Gold and Britannia bread, as well as Pizza Hut and Subway's ready-to-eat pizza and burger buns—although it's not listed on the label. Eek.

TBHQ stands for tertiary butylhydroquinone (you know, one of those beware ingredients you can't pronounce). It's an additive used to prevent or delay oxidation in fish products, microwave popcorn, and chicken nuggets. It's also in Reese's Peanut Butter Cups and Crisco. Some research suggests that excess TBHQ can cause toxic effects on the immune system in kids.

BPA is a buzzed-about industrial chemical that's added to many food and beverage containers—mostly cans and plastics. Some reports suggest it's in more than 16,000 packaged products and 67 percent of canned food. Research finds that BPA can be a hormone disruptor, mimicking estrogen in the body.

Because the chemical element arsenic is present in soil and water, it can make its way into seemingly healthy foods like grains, including rice, fruits and fruit juices, and vegetables. However, the biggest source of arsenic toxicity in humans is from contaminated water from geological sources.

While long-term exposure to inorganic arsenic is linked to a higher risk of skin, bladder, and lung cancers, don't freak out just yet. Most of us drink clean, filtered water—and that's the number one way to avoid exposure. That said, one study of 142 pieces of cooked chicken and 116 pieces of raw chicken from a grocery store found that 78 cooked and 65 raw samples contained arsenic.

Carrageenan is an additive that's used to thicken and preserve food and drinks. While it might come from a something healthy (seaweed), there's some evidence that links it to inflammation and GI issues (think: bloating or IBS) and food allergies. You'll find it in some nut milk, puddings, whipped cream, and Nesquik drinks.

Popular cookie and cake mixes contain this preservative that's used as a "stabilizer" in foods. The problem is you'll also find the ingredient on the Environmental Working Group's food additive watch list.

It might be an amino acid, but if you notice L-Cysteine on the ingredient list of your favorite bread or bagels, some reports suggest it's sourced from feathers and human hair. Einstein Bros. and Dunkin' Donuts have both confirmed using L. Cysteine in all of their bagels.

BHT can be considered BHA's (evil) cousin since they both have the same purpose: to keep food fresh. But BHT is also a human skin and eye irritant. In animal studies, rats fed high doses of BHT showed increases in cholesterol, too.

Used as a whitening agent in cereal flour and as a "dough conditioner" in bread, the FDA considers azodicarbonamide a "safe" additive. But the European Union, which banned the use of ADA (as it's also known), thinks otherwise.

Powdered cellulose—made from dried wood pulp—is approved by the FDA and is generally recognized as safe (GRAS). It's used in foods like grated cheese, coffee creamer, and frozen Lean Cuisine to absorb water and other liquids. The problem is it's non-digestible, so many people think it has no place in our food.

The FDA generally recognizes MSG, a chemical compound that amps up the flavor, as safe. But they've also received multiple complaints—think headaches and nausea—about the ingredient over the years. Chinese food isn't the only culprit either. Other packaged foods like Doritos contain MSG as do popular boxed meals, like Kraft Mac and Cheese.

Listed as GRAS by the FDA, maltodextrin is a powder that can improve a food's texture, taste, or shelf life. It's found in frozen foods (including the Lean Cuisine Spinach, Artichoke & Chicken Panini), but some research links the ingredient with changes in the gut and inflammation. 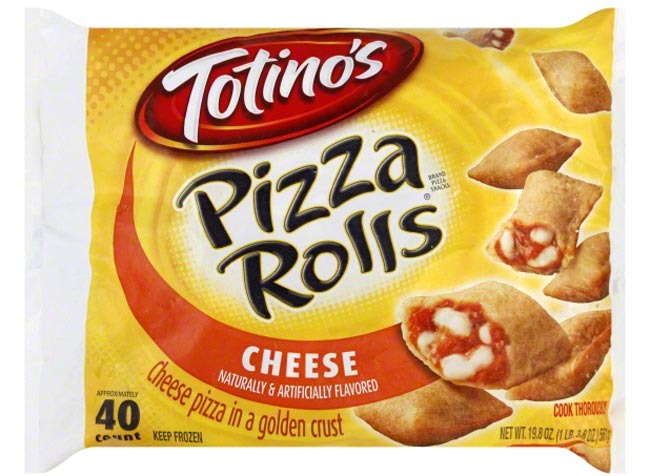 BHA is a synthetic antioxidant that keeps packaged foods from going rancid. You'll find it in potato chips and some vegetable oils as well as both Chex Mix and Totino's Pizza Rolls. And before you think the word "antioxidant" makes it healthy, BHA has been shown to be carcinogenic in animals. Plus, it's banned in other countries.

This additive is a preservative to keep food fresh and prevent a product from "clumping." Some research finds that nanoparticles of titanium dioxide are a "possibly carcinogenic to humans." It's in both Lil Debbie Chocolate Cupcakes and Totino's Pizza Rolls.

You'll find this processed meat preservative in foods like Oscar Meyer salami and cold cuts. While it keeps cured meats fresh, some research links high amounts to colon cancer—and processed meats—in general to a higher risk of cardiovascular disease and other health issues.

This popular cooking oil—sometimes thought to be a better alternative to saturated fats—can be found in coffee creamers, some packaged wraps and flatbreads, and Cheez Its ingredients. But some research has linked it to weight gain and inflammation.

Banned in countries like Norway and Austria, these food dyes have been linked to allergies as well as neurochemical and behavioral changes, particularly in animals. The FDA requires food companies to label products that have them so that people who are 'sensitive' to the dyes can avoid consuming them. Best to skip Kraft Mac and Cheese, jelly beans, and caramel syrup if you're worried.

This red pigment (also called carmine) is made from crushed up bugs used to be a staple of some Starbucks drinks. Lab tests suggest the ingredient is non-toxic. But some people have allergic reactions to it. The FDA requires products with this ingredient to include them in the label. You can still find it in foods like Yoplait yogurts.

Another lovely standout from the FDA's Defect Levels Handbook: Every 100 grams of drained, canned mushrooms and every 15 grams of dried mushrooms can have 20+ maggots. Yum.

Polysorbate 60 is a thickening oil used to bulk up foods like pudding and gelatin desserts and keep sauces (think: chocolate or caramel) smooth. You can also find it in cosmetic products. The FDA describes it as "a mixture of polyoxyethylene ethers of mixed partial stearic and palmitic acid esters of sorbitol anhydrides and related compounds." Just what you wanted to for dessert, right?

You'll find this preservative in fast food staples such as McDonald's "Big Mac" sauce and Taco Bell's freezes. It's sometimes added to foods to protect against bacteria, yeast, or mold growth and is GRAS in small amounts.6254a4d1642c605c54bf1cab17d50f1e

This artificial, zero-calorie sweetener (aka NutraSweet and Equal) is one of the most popular ones on the market. You'll find it in diet soda, sugar-free Cool Whip, no-sugar-added bars, and sugarless gums. The problem is some research links aspartame intake to increased hunger levels and weight gain.

Used in food processing and packaging, phthalates can seep into your favorite foods, too. The ingredient has been called an endocrine disruptor because of its estrogen-mimicking activity in the body. Research also links it to both reproductive issues and birth defects. Your restaurant meals may be jammed with them. One study published in Environmental International found that people who eat out had35 percent higher phthalate levels than those who consumed home-cooked meals.

Found in candy, chocolate cake, cereals, pastries, fruit snacks, and more foods, Red #40 is one of the most widely-used food dye in the country.  It's derived from petroleum and some research suggests the dye is "likely carcinogenic."

It's used to keep citrus flavorings from floating to the top of some sodas and sports drinks (Mountain Dew has BVO in it). This food additive, which contains bromine—an ingredient in flame retardants—is banned in both Europe and Japan.