Unhealthiest Foods in the Food Court

If the food court at your local mall had a slogan, it would say: Resistance is futile.

Because no matter how dedicated you are to eating well, the mall is the perfect machine for dashing your discipline. In its airtight electric ecosystem, all signs point to consumption. See, studies have shown that the more temptation people resist, the harder it becomes to continue resisting. That means after hours of being surrounded by last-minute offers and cloying salespeople, your ability to stave off the enticing edibles of the mall food court may be severely compromised. And when you've already dropped a few hundred bucks at Banana Republic or Aldo, what's another 5 bucks on that warm, gooey little snack with an aroma that's wafting in the air?

Problem is, that "little snack" could translate into half a day's worth of calories—and a lifetime of trouble. A brand new study from the Harvard T.H. Chan School of Public Health found that men who ate processed and high-fat foods—like the kind you'd find in malls—had a 67% risk higher risk of dying than those who had a high intake whole grains, fruits and vegetables!

What follows is the definitive list of The Worst Mall Foods in America 2015, compliments of a new report from the editors of Eat This, Not That! magazine.

Auntie Anne can be like the old calorie-pushing hag from Hansel and Gretel if you're not careful. The secret to success (or failure) at her pretzel lair is choosing your condiments wisely. Skip the butter and salt and be sure to find a solid dip. The Hot Cheese Salsa is the worst dip, and marinara's the best (by a healthy margin); start there and work backward. And avoid the pepperoni.

The architecture of this thing makes it less like a slice of pizza and more like a pizza inspired Chipotle Burrito. It relies on an oversize shell of oily bread to hold together a gooey wad of cheese, sausage and pepperoni. The net result is a pizza pocket with two-thirds of your day's fat and more than a day's worth of sodium. And the traditional pizza slices aren't much better; few fall below 600 calories. If you want to do well at Sbarro, think thin crust with nothing but produce on top. (And go from thin crust to a thinner you: Slim down in time for Summer with these essential 14 Ways to Lose Your Belly in 14 Days!)

It's unfortunate that this dish happens to be one of the most popular on Panda's menu. Consider the recipe: battered and fried, then coated in a sugary syrup. It's like Colonel Sanders meets Willy Wonka. Pair with a scoop of fried rice and you've got a dish with serious flab-enhancing potential. Here's a better survival strategy: Skip the rice altogether and choose steamed veggies instead. Then pick any entrée besides orange chicken.

Somehow the Blizzard and its ilk have become so commonplace that they seem to slip unnoticed beneath the radar of normal nutritional prudence. It's just an innocent cup of ice cream, right? Eh, not exactly. Dairy Queen blends its Blizzards with copious amounts of fat and sugar. Thankfully, the DQ Sandwich and the extensive line of small sundaes should be enough to stave off even the sweetest tooth. And slim down even faster with the magical power of tea by drinking these Eat This, Not That!-certified 4 Teas That Melt Fat!

We applaud Five Guys, first for their delicious burgers and second because said burgers don't come coated with trans-fatty oils (unlike too many of their competitors). But their regular-size burgers are still way too big, and the fact that they call their substantial single patty option a "small" burger encourages overconsumption. The bacon cheeseburger is the most caloric, but none of the other options are less than 700 calories either. Instead, consider a "little" burger, which will fi ll your stomach without requiring you to plug a new hole at the end of your belt. Plus, you can load it up with all the produce you want.

Smoothie King calls this a "fitness blend," but we call it one of the quickest ways to fill out the midsection. The bulk of the smoothie butter pecan ice cream! Then, to make a bad smoothie worse, Smoothie King adds the usual heap of turbinado sugar and a weight-gaining protein powder, leaving this cup with as much sugar as 12 Dunkin' Donuts Chocolate Frosted Cake Donuts! Eliminate the added sugars by asking for a slim smoothie. And lose up to 16 pounds in 2 weeks with this exclusive excerpt from Zero Belly Cookbook—The World's Best Weight-Loss Lunch!

Panera, home to soups, salads, and a general feeling of well-being (not to mention free Wi-Fi!), benefits from a beaming health halo—a perceived virtuousness that doesn't necessarily play out in the hard realities of their nutritional stats. Yes, you can carefully construct a well-balanced 500-calorie meal, but you can also unknowingly consume 1,500 calories without breaking a sweat. Take this sandwich: It begins innocently enough (steak slices and white bread), but is supported by a scurrilous cast of horseradish sauce made of soybean oil, red onions soaked in sugar and a tarp of cheddar cheese, the most fattening of the cheese choices. The result is a lunch with more calories than 11 Rice Krispies Treats and a serious crack in the health halo. 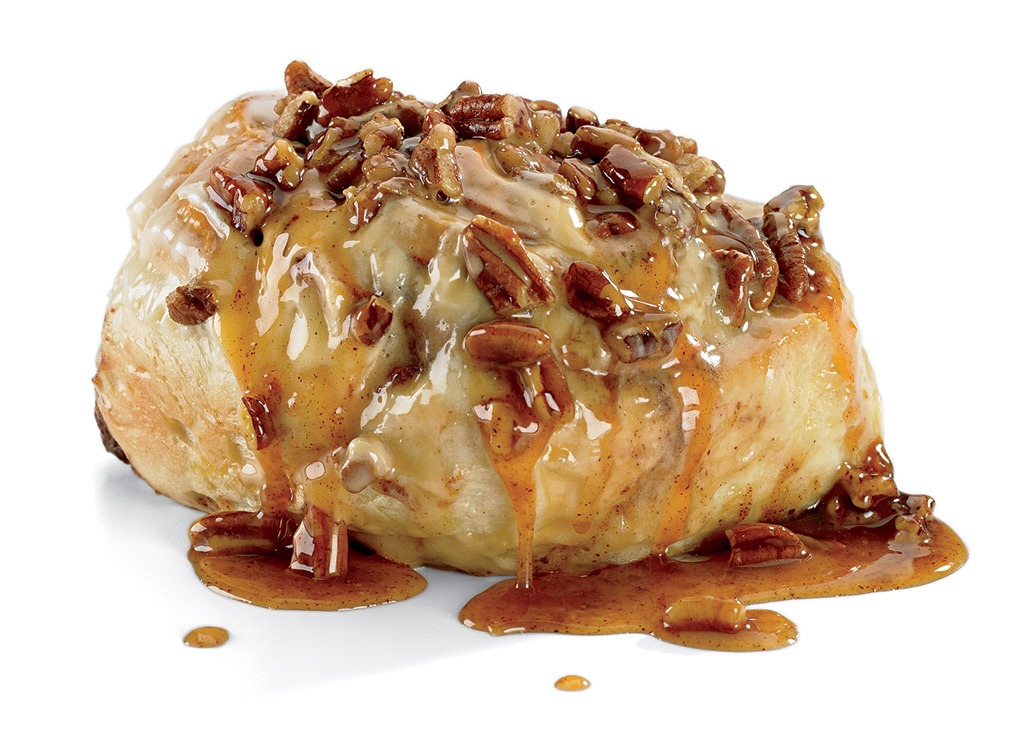 Cinnabon and malls are inseparable. Consider it a symbiotic relationship: Researchers have found that men are turned on by the smell of cinnamon rolls, and further studies have shown that men are more likely to spend money when they're thinking about sex. But just because Cinnabon might be good for Gap doesn't mean it's at all good for you. This dangerously bloated bun contains nearly an entire day's worth of fat and more than half of your daily allotment of calories. (For those keeping score, that's as much as you'll find in 8 White Castle hamburgers!).