7 Quick Ways to Make Any Soup A Fat-Burner

Check out these quick ways to supercharge your soup for weight loss.

When it comes to quick weight loss, soup can be a hearty, savory weapon in your arsenal, either as a satisfying meal or an hunger-quelling appetizer. But proceed with caution. Although creamy soups can sabotage your weight-loss efforts, you don't have to relegate yourself to thin broth. You can preserve complex flavor and creamy texture with these expert tips on how to keep soups low in calories but rich in taste.

Ever notice that restaurant soups taste so much more complex than the cans you crank open at home? That's because chefs rely on homemade stocks, which help infuse soups with depth of flavor. "Take this recipe from The Planet Friendly Diet: "Take 6 large mushrooms, 3 stalks of celery, 2 medium carrots, 2 large leeks (white part only), 2 large tomatoes, 7 cloves garlic. Place vegetables on baking tray, roast in oven until lightly brown. Boil 5 cups of water in large pot. Add roasted vegetables, cook at a low heat, covered, for 1 hour. Pour through a strainer into a storage container, refrigerate liquid once cooled. Make a big pot and freeze the extra," suggests Cat Smiley, author of The Planet Friendly Diet and owner of the Whistler Fitness Vacations weight-loss retreat. " If you're low on time, go for store-bought organic vegetable broth instead. "There are loads of high-quality brands that are low in sodium and rich in taste," adds Smiley.

Don't underestimate the nutritional prowess of this tiny seed (see 5 Reasons You Should Eat Chia Seeds Now). You might consider them a go-to for smoothies, but they're also a great team player in savory soups. "For a subtle protein boost, slip some chia seeds in. They expand with the liquid, making the soup seem more satisfying with added fiber," says Smiley.

Swap Out Cream or Butter 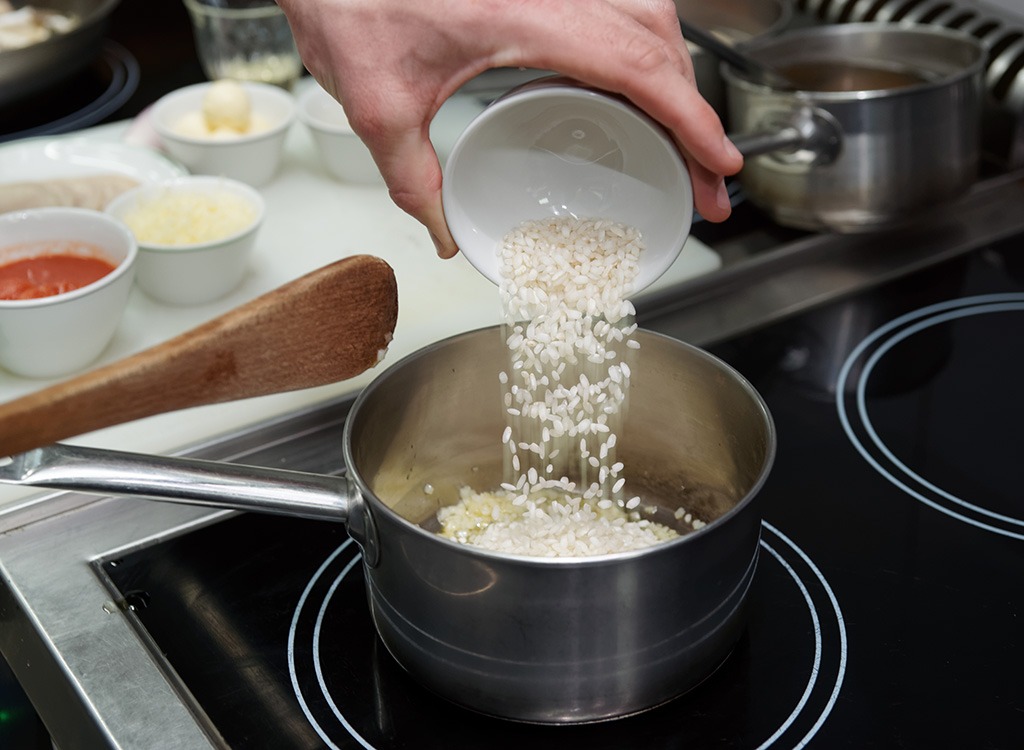 Loaded with fat and calories, heavy cream and butter can be a serious dietary speed bump. Instead, "Use rolled oats or Arborio rice to create a silky smooth, creamy, pureed soup. Just cook two tablespoons of rice or ¼ cup oats in a soup [recipe] that serves six to eight people,and puree in the blender," says Chef Elliott Prag of New York City's Natural Gourmet Institute. You'll get a rich texture and a slimmer waist. In a pinch? Blended baked potatoes or cauliflower can work in place of dairy.6254a4d1642c605c54bf1cab17d50f1e

Soups are one of the largest sources of sodium in the American diet. "We usually end up guzzling triple our daily recommendation in just one serving of soup," says Lisa Hayim, registered dietician and founder of The WellNecessities. Luckily, you can avoid making salt bombs. "To avoid the mistakes restaurants make, either make your own broth or opt for a low-sodium version. Vegetable, chicken and beef are all available." In soup recipes, even water works fine as a base. To compensate, add spices like red chile pepper flakes, cayenne, oregano, or whatever you like for a sodium-free flavor boost. Even a splash of vinegar works nicely.

Load Up on Super Grains

You know quinoa's good for you, but in addition to that powerful grain, "Add sorghum, millet, or farro to your soups for added fiber, B vitamins, and minerals, such as zinc, iron, magnesium and selenium," says Prag. For the best texture, it's a good idea to cook grains separately before adding them to soup. Check out our handy guide to Grains With As Many Health Benefits As Quinoa!

Even if a recipe doesn't call for it, load up on these nutrient-packed superstars. "I think of soups as 'everything but the kitchen sink.' If I have extra greens lying around, I throw them in the pot," says Hayim. "They wilt nicely and are easier to digest once they are heated. It's one of the easiest ways to add fiber and nutrients into your meal." Not sure what to include? Start with these Best Fall Greens for Your Budget.

"Use fresh herbs in place of dry in your soups for their rich phytonutrient and antioxidant content," advises Prag. "Fresh herbs greater vibrancy of flavor and nutrition. Add them at the very end of cooking, just before serving," he adds. Our favorite? Cilantro. It can work wonder to fight bloating (just like these 7 Other Bloat-Busting Foods!) But if you find that herb to have that whole soap-tasting vibe, parsley is a good bet — it can even help keep your appetite in check.

Now check out these 20 Best Fat-Burning Soups, and get cooking!