Eat Out at Any Restaurant and Still Lose Weight Fast

Eating healthy at a restaurant is a little like taking the SATs all over again.

You're presented with a menu of multiple choices, most of them are wrong, and if you don't figure it all out, a bad score is certain to mess up your future. The monitor (er, waiter) can't help you, and you can't even cheat because the questions change all the time.

But what you can do is get these six questions right every single time. They may seem like simple queries, but in most cases, there's a hidden agenda—and a secret opportunity to put the kibosh on extra calories and accelerate your weight loss. Consider this your restaurant CliffsNotes.

TRICK QUESTION #1: "HAVE YOU BEEN HERE BEFORE?"


Quick Answer: "We eat here all the time"

A study in the International Food Research Journal found that people are less likely to make healthy restaurant choices when they feel that they're dining out for a special occasion. That makes sense, except…we also tend to view dining out anywhere, at any time, as a "special occasion." Yet nowadays, between takeout, delivery and dining out, the average American eats restaurant food for one out of every three meals.

Before you head out for your meal, take stock of how many times you've eaten out this week. If a trip to a restaurant truly is a once-a-week splurge, then don't worry about it so much. But if you're like most of us, eating out is probably more like a once-a-day splurge. Eat smart today because you'll have to do it again tomorrow.


Quick Answer: "Oil and vinegar on the side."

It sounds like a weenie move, ordering the dressing on the side, as though you're trying to micromanage the kitchen from your booth. But the stats don't lie. A house salad at Applebee's is 230 calories. If they dump the blue cheese dressing on it, it's suddenly 470 calories, or about what you'd get by ordering their 12 oz New York strip. (And the salad has 40 grams of fat, versus just 25 for the steak.) But a light dose of oil and vinegar keeps this meal under 300 calories. A swap like this daily will save you close to 18 pounds a year!

Consider this: The number-one source of calories in the American diet isn't burgers, cookies, or even beer. It's bread. It's all around us—wrapping our sandwiches, sitting alongside our eggs, resting in a little basket at our dinner table. And for the most part, bread is a nutrition- free source of straight-up sugar calories. A slice of Italian bread has 80 to 100 calories; a plain dinner roll will average 87 calories.

Why do restaurants want us to eat the bread? Because bread gives us a sugar rush, followed by a sugar crash, so we're primed for dessert at the end of our meal. The simple solution is to pass on the breadbasket altogether, but damn, you're hungry. If you can, order a shrimp cocktail. Five juicy shrimp dipped in sauce clock in at only 100 calories and more than 12 grams of belly-filling protein, and can be at your table in minutes


Quick Answer: "That is my entrée."

Order your whole meal off the appetizer menu. Or hell, order your entrée off the kids' menu— who cares that you're over age 9? You're allowed to order as much, or as little, as you want, so take advantage of that fact, says New York dietitian Keri Gans, R.D. "That's the whole reason for portion control," she says. "It's not that the pasta's so terrible for you, it's just the size of the plate." In fact, you should consider every restaurant meal "pre-super sized." Over the last two decades, restaurants have grown our portions all out of proportion. Just take a look at the chart below. 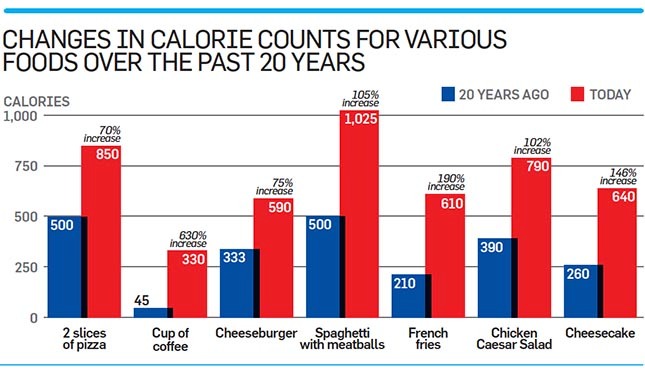 Ha! A trick answer for a trick question. In most restaurants, "grilled" foods are cooked on a grill plate—it's little more than a giant, flat sauté pan, where grease gathers to dance around and have a party. "Grills" at restaurants lock fat in, instead of cooking it off. Flame-grilling means putting the meat or vegetables over an open flame. At this point, your waiter may scratch his head and shuffle off in a sort of "Hope I get the part in the soap opera and can quit this gig" kind of way, only to return and say there's no actual grill in the kitchen. In that case, ask for it to be broiled, using the broiler that's located, yep, under the griddle. Either way, "flame-cooked" makes an enormous difference; a study in Meat Science (yeah, we're subscribers) found that grilling a pork chop could actually decrease its fat content by a third.

TRICK QUESTION #6: "WOULD YOU LIKE TO SEE A DESSERT MENU?"


Quick Answer: "Do you have any berries?"

Even if the restaurant only lists gooey, chocolaty, decadent desserts on its menu, chances are there are some blueberries and strawberries—two of the best fruits for fat loss—floating around in the kitchen. Ask for a bowl topped with a generous scoop of whipped cream for a decadent off-the-menu dessert. One cup of mixed berries topped with 3 tablespoons of whipped cream has only about 117 calories, compared with 492 in a piece of tiramisu and 411 in a slice of apple pie. Or keep it simple and just order a bowl of ice cream. Four ounces of vanilla ice cream has about 145 calories, while chocolate clocks in at 130. In an ideal world, of course, you won't order dessert. But ideal worlds are boring.