We don't need a USDA report to tell us how much Americans love pizza.

When the USDA did commission a report on pizza, though, they found that 13 percent of us are eating this adapted Italian import on any given day. (And that number jumps to a staggering 26 percent for boys between the ages of 6 and 19.) That comes out to 250 slices of pizza eaten every second. While we could tell you that nutrient-deficient bread loaded with calorie-laden oil and saturated fat has no place in a flat-belly diet, we're not going to. Yep, you heard us right. There's no need to give up pizza altogether to stay healthy and lose weight. You just have to put together the right pie.

You probably didn't know it, but there are some benefits to eating some 'za. In the same study, USDA researchers found that on a typical pie-eating-day, pizza provides us with 37 percent of our bone-building calcium, 35 percent of our muscle-replenishing protein, 30 percent of our satiating fiber, and over 50 percent of our daily intake of lycopene (an antioxidant found in tomatoes that has been shown to have anti-cancer effects in animals). See? It's not all bad. Well, except for the dough.

Because pizza crust is typically made with refined flour, these carbs burn up fast in your body, spiking your blood sugar—then causing it to crash—and leaving you craving more food. These nutritionally-empty calories offer few or no nutrients compared to the amount of vitamins, minerals, and fiber in any "slow-burning" whole food. Besides making you constantly hungry, eating refined grains increases your risk for belly fat, according to a study in The American Journal of Clinical Nutrition.

So what was that about having pizza in a healthy diet? Well as it turns out, you don't need blood-sugar-spiking refined flour to make a delicious pizza. By swapping out the dough for any one of these innovative, healthier alternatives, you can continue to indulge in your pizza habit while keeping up your weight loss efforts. Reinvent your pizza crust by using any one of these nutrient-dense whole grains, veggies, beans, and fruits! And for more tips and swaps, check out our Official Carb Lover's Guide to Weight Loss. 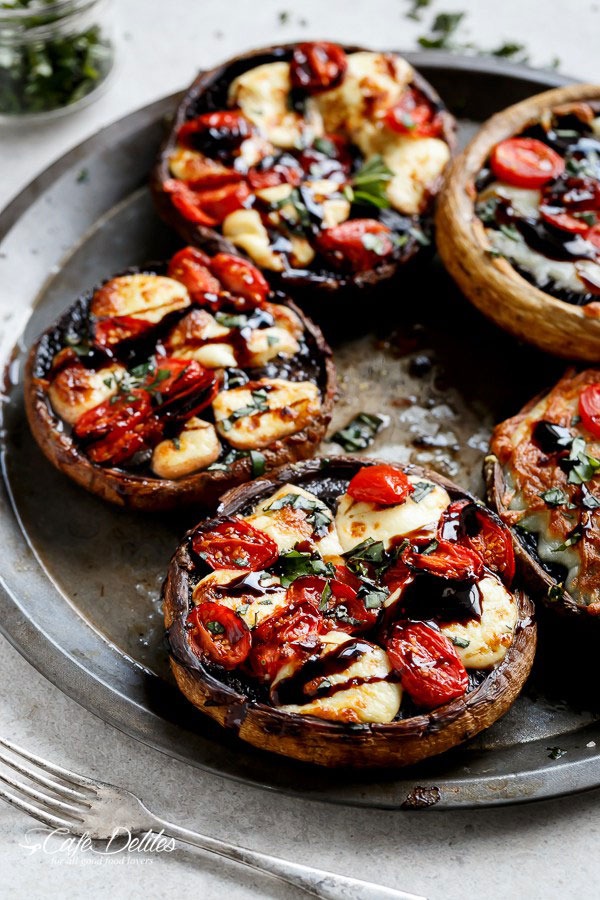 If you get your sweat on regularly, this swap is a no-brainer. Instead of flour, use a portobello mushroom as your pizza base. A single portobello trumps bananas on the potassium front—the electrolyte that plays a key role in hydration in our muscles and tissues and is also crucial for muscle health and recovery. These portobellos are brushed with a garlic herb oil and then topped with cherry tomatoes, mozzarella, and a sweet but tart balsamic reduction.

Get the recipe from Cafe Delites. 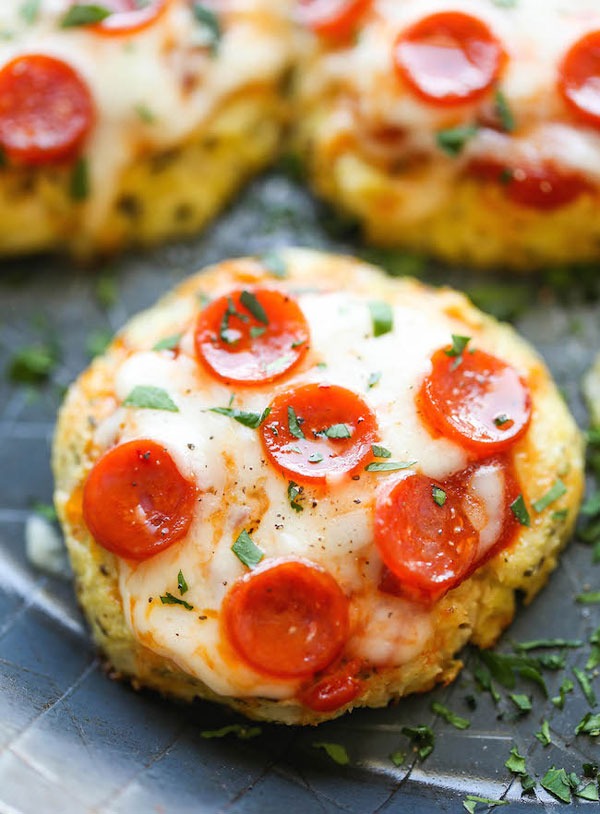 Leading the way in alternative pizza crusts is the almighty cauliflower. This white veggie wonder is light and crispy with a similar bite to thin crust pizza. To make it, you'll just need cauliflower, cheese, an egg, and a mix of herbs! Expert tip: Lose the soggy crust by draining all the water from the cauliflower before mixing. We love that this blogger makes these pizzas mini because many cauliflower pies lack the integrity to hold up a normal pizza slice. You can also follow this recipe using cauliflower's cousin, broccoli. Want more of this white cruciferous veggie? Here are 17 Genius Ideas for Cooking With Cauliflower.

Get the recipe from Damn Delicious. 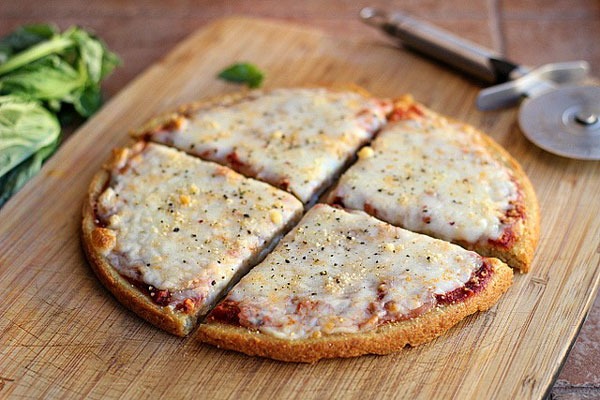 Boost your protein intake with this quinoa crust. Besides boasting all 8 essential amino acids, quinoa is packed with health-boosters like zinc, calcium, iron, riboflavin, heart-healthy fats and antioxidants that have been found to reduce inflammation. If you didn't think it could get much better than that, wait until you hear this: you'll only need 5 basic ingredients to whip it up. Quinoa, water, salt, baking powder, and oil. Now you can satisfy your late-night pizza craving without having to order delivery.

Get the recipe from Oatmeal With A Fork. 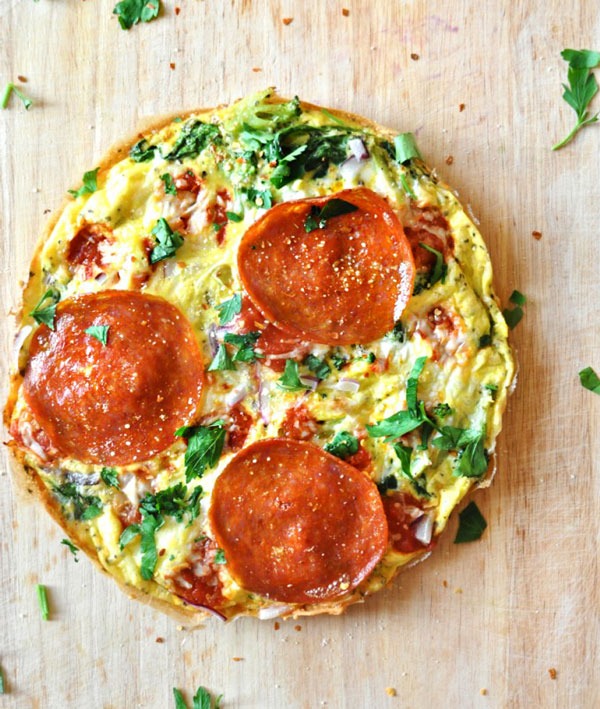 Let's be honest. Most of us have had cold pizza for breakfast before. Unfortunately, its refined carbs cause your blood sugar to crash well before lunch, leaving you at a greater risk of being uncontrollably hangry during your team meeting at work. Fill yourself up with health-boosting, protein-packed eggs using this delicious frittata topped with herby pesto, iron-packed spinach, lycopene-rich tomato sauce, and gooey mozzarella.

Get the recipe from Minimalist Baker. 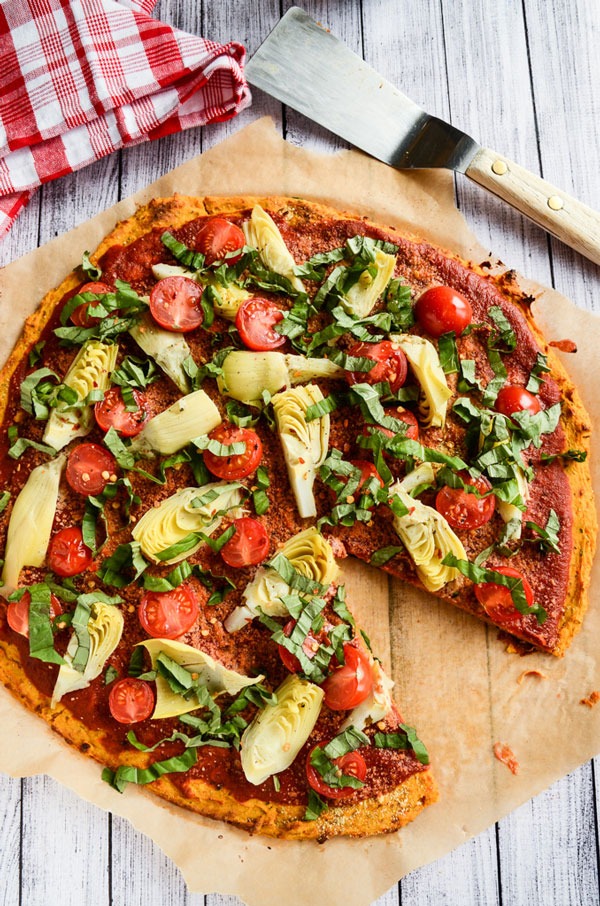 This pizza has almost the polar opposite effect of high-glycemic refined flour on your body. Sweet potatoes' concentration of carotenoids help to stabilize your blood-sugar levels—rather than spike them—and lower insulin resistance, which prevents calories from being converted into fat. What's more, this sweet potato crust uses apple cider vinegar. Composed mostly of acetic acid, apple cider vinegar has been shown to delay gastric emptying and slow the release of sugar into the bloodstream. That means you'll be fuller and be able to maintain energy levels longer than with a normal pie.

Get the recipe from Blissful Basil. 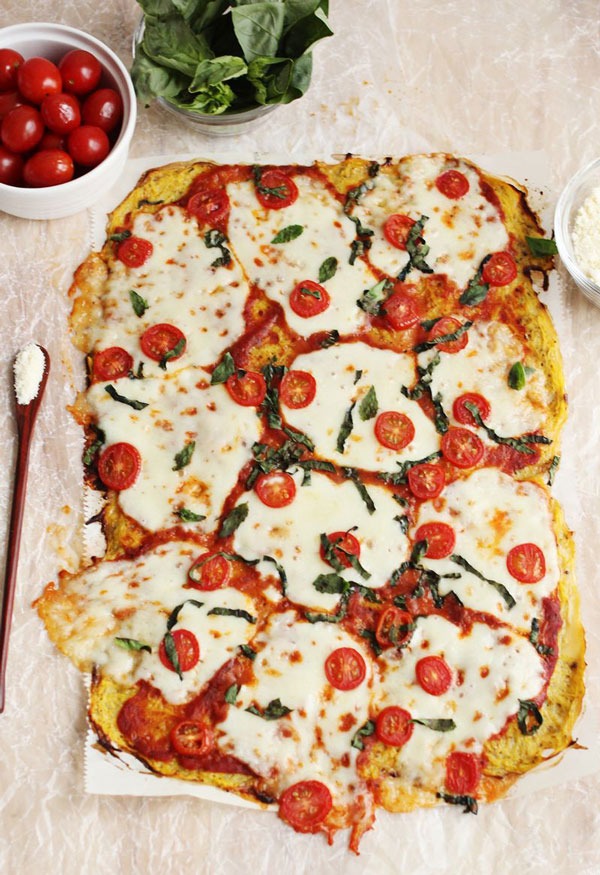 It might not be exactly like thin crust pizza, but this spaghetti squash pie (plus just egg and seasoning), is super delicious. When you use a spaghetti squash instead of dough, your crust is not only going to be lower on the glycemic index — to keep your blood glucose levels steady — but spaghetti squash is also higher in micronutrients like vitamin A, folic acid, and potassium than bleached, white flour.

Get the recipe from Spaghetti Squash. 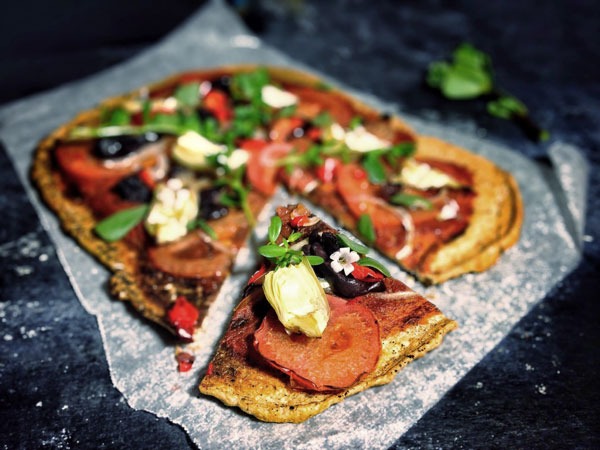 We love pulses for their nutrient-density, low-cost, and amazing versatility. From brownies and cookies to veggie burgers and dips, no food group can act in such a wide range of recipes. And now, you can add pizza to the list. Each of these pizza pies contains about 1/2 cup of red lentils, which will provide you with protein, iron, copper, manganese and folate, a B vitamin that has been shown to help boost memory function. It'll also give you a third of your DV of fiber. Thanks to its satiating effects, simply adding more fiber to your diet can be enough to boost weight loss efforts, according to a Annals of Internal Medicine study. All you have to do is blend the lentils together with water, garlic, and seasonings, and then fry it up in a pan.

Get the recipe from Vie de la Vegan. 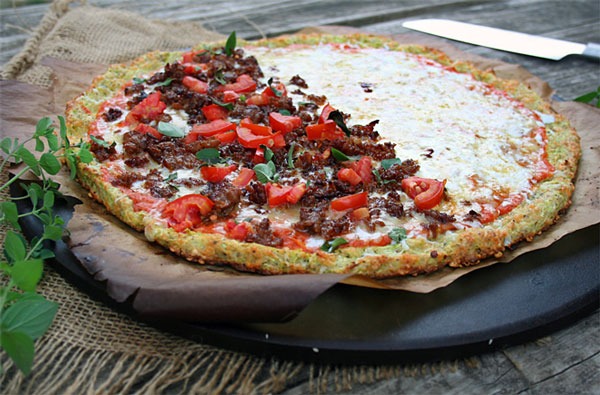 First zoodles replaced pasta, and now zucchini will replace your pizza. Now this recipe isn't entirely flourless in the sense that you blend zucchini with almond flour, but we'll count it because almond flour is worlds away from wheat flour. Almonds are high in calcium, which can help the body burn more—and store less—fat. They're also a great source of magnesium, a mineral that helps increase lean muscle mass and boost lipolysis (a process by which your body releases fat from its stores). As for zucchini? It's high in potassium, folate, vitamin C and eye-protecting vitamin A.

Get the recipe from My Humble Kitchen. 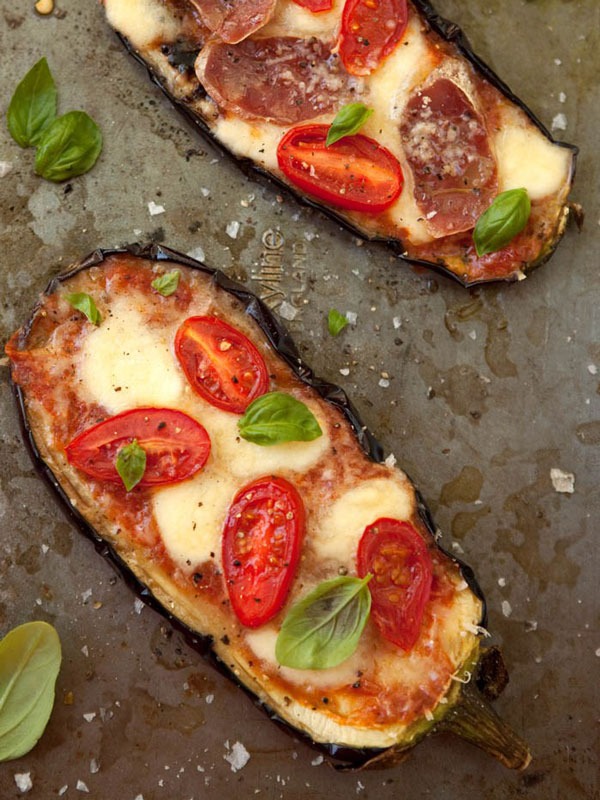 You can turn any vegetable into a pizza by just topping it with cheese and tomato sauce, but we'd have to say eggplants are one of the tastiest ways to try it. Not only are they meaty and filling, eggplants are also teeming with chlorogenic acid, a phenol antioxidant that scavenges disease-fighting free radicals. Just brush each side of the aubergines with olive oil and then grill them over a medium heat. Once grilled, add your toppings and bake!

Get the recipe from Drizzle and Drip. 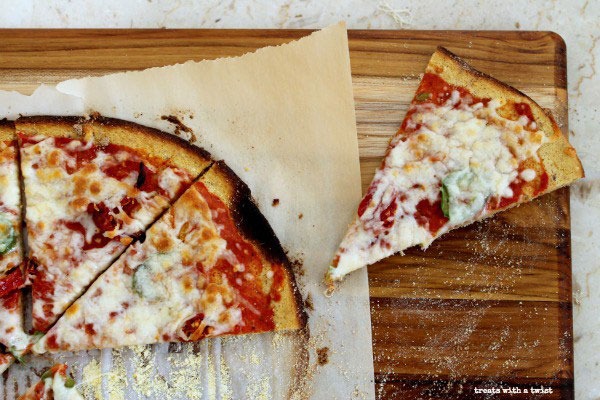 It doesn't get any easier than this. For the crust? Just a plantain, an egg, and some seasoning. That's it! Bet you didn't know pizza could be simple enough to make at home. And if you asked us, we'd easily mistake this plantain-based pie for a regular pizza. Make sure you pick the least ripe fruit for the pie because it'll be more neutral flavored rather than sweet. Shaped like bananas, plantains are more like starchy potatoes than sweet and also have over double the immune-boosting vitamin C than their banana cousins.

Get the recipe from Treats with a Twist. 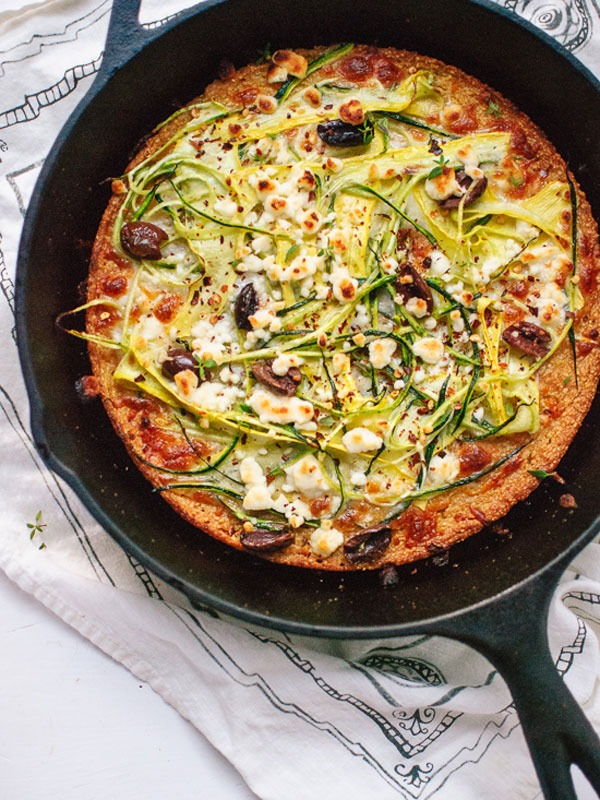 The Mediterranean flavors of feta, sun-dried tomatoes, olives, and zucchini top this socca pizza. Socca is a traditional Greek pancake that bumps up its protein and fiber content by using chickpeas instead of white flour. While you can buy it in stores, whip up your own chickpea flour base by grinding dry chickpeas in your blender. Blend until ground as finely as possible and then sift flour through a sieve into a bowl. Want more ways to get chickpeas into your diet? Check out our 20 Amazing, Surprising Ways to Use Chickpeas—making a socca is #18!. 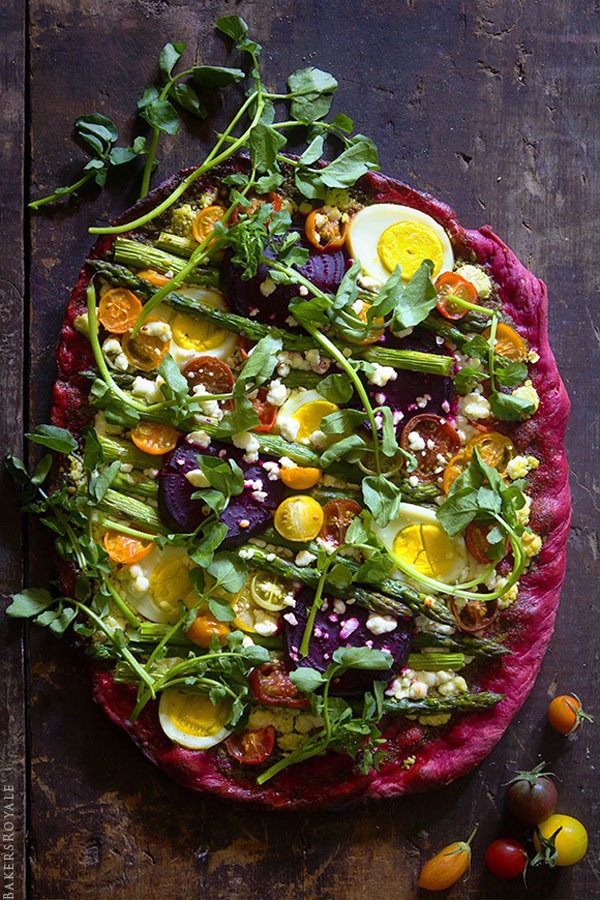 Who knew eating pizza would boost your athletic performance? Well, that's exactly what will happen if you make this pie! It's made with beets, a veggie that has been shown to increase blood flow to muscles, particularly "fast twitch" muscles that affect bursts of speed and strength, according to a study conducted at Kansas State University. Another study published in the Journal of the Academy of Nutrition and Dietetics found that runners who ate baked beets before a 5K ran five percent faster, a result attributed to the beets' nitrates, a natural chemical that increases endurance and lowers blood pressure. Instead of the flour the recipe calls for, just sub for any gluten-free flour like chickpea flour, almond flour, or coconut flour for some added benefits. Beets are one of the 25 Best Foods for a Toned Body.

Get the recipe from Baker's Royale.