9 "Greek" Foods No One Eats in Greece

Greek cuisine may be one of the first things you think about when you hear the words Mediterranean Diet. Across the pond, we generally associate Greek cuisine with fresh vegetables, simply prepared fish, a ton of olive oil, and beans—especially chickpeas. Other "Greek" dishes we've come to expect from the traditional Greek restaurant are gyros, dips such as hummus, that iconic feta-topped chopped salad, and other baked dishes.

But are these ubiquitous dishes actually Greek? As it turns out, many weren't traditionally consumed in Greece—that is, until they became wildly popular around the world. Let's take a closer look at the "Greek" dishes they don't actually eat in Greece. (Plus, read about 6 "Mexican" Dishes No One Eats in Mexico.)

Gyros, which are inspired by the Turkish doner kebab, aren't native to Greece. According to estimates, gyros didn't make their way there until the 1920s. Though popular in the U.S., lamb gyros are hardly consumed at all in Greece. As one traveler discovered, the Greeks are much more likely to eat their gyros with pork and sometimes chicken. Though in one Reddit thread about traditional Greek foods, a native of Greece wrote, "We never ate gyros growing up. I didn't even know what a gyro was until I was in college."

Somewhere in your gut you probably knew this: The Greek yogurt that you buy at the supermarket isn't the same as what you'd get in Greece. While any strained yogurt has come to be seen as "Greek," that isn't the case across the pond.

Elena Paravantes, an RDN with Greek heritage, writes on her blog Olive Tomato, "In the past, Greeks would mostly eat traditional yogurt made from leftover sheep's milk after making cheese. This non-strained sheep's milk yogurt that was stored in ceramic containers (and still is) was an important part of the traditional Greek diet and had multiple health benefits."

While strained yogurt was available, it was considered "fancier" and was more expensive. "In fact," she continues, "the strained 'Greek' style yogurt is not even considered yogurt by many. My grandfather, who lived to be 102, would say, 'If the yogurt doesn't have the whey in it, then it's not yogurt.'"

RELATED: We Tasted 5 Greek Yogurts & This Is the Best

You heard right: Despite the fact that you can find this chickpea and tahini spread in nearly every Greek restaurant in America, this dish is actually Middle Eastern, according to The Travel. Some 20 countries surround the Mediterranean, and while they might all use the same set of ingredients, each nation creates unique dishes. Hummus is a popular dip, and it's actually the Arabic word for chickpeas. Tzatziki–that wonderful combination of yogurt, cucumbers, and garlic–is Greek. Puréed fava is actually of Greek origin and much more common.

That pita you're dipping in hummus (or your other favorite dip of choice) isn't Greek either. According to Wikipedia, "In Greece, the word pita means 'pastry' and is usually used for various cakes and pastries . . . unrelated to the English language 'pita' flatbread." Hence, Spanakopita, a dish of spinach and feta folded into phyllo, literally translates to "spinach pie." Though, of course, a type of flatbread resembling pita is used for gyros, which are now found in all tourist areas of Greece due to their popularity across the world. According to Paravantes, the two words are now used in Greece to describe the pies and the bread. 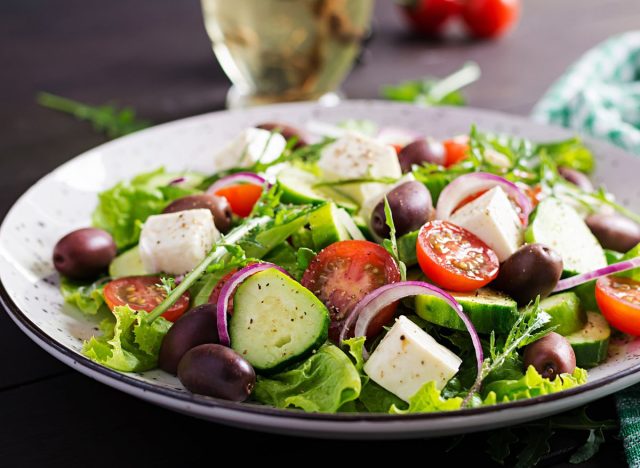 RELATED: 10 Healthy Salad Dressing Recipes You Can Make in Minutes

We all love the theater of things set on fire, but the flaming cheese dish called saganaki—cheese doused in ouzo and lit on fire with an enthusiastic "opa!"—isn't native to Greece. According to Better and The Travel, flaming cheese was invented in Chicago. Several Greek restaurants in Chicago claim to be the origin of this fiery dish, with the owner of The Parthenon restaurant in Chicago's Greektown being particularly vocal about it. Saganaki also refers to the pan that this dish is served in—not the dish itself—so don't expect every saganaki dish to be ceremoniously lit on fire at every Greek joint.

Moussaka is a dish of layered eggplant, tomato sauce, and ground beef or lamb topped with a creamy béchamel sauce—but it's more modern Greek than old-school Greek. In fact, Aglaia Kremezi, a celebrated Greek food writer and journalist, writes in The Atlantic that tomatoes were just starting to be used in Greek cuisine in the 1920s. The dish is most likely of Arabic or Turkish origin and was modified by chefs for the upper-class Greek palate.

Kremezi writes, "According to my research, this moussaka became part of the urban Greek kitchen in the early days of the 20th Century after Nicholas Tselementes's cookbook, known as the Greek 'cooking bible,' came out." Nicholas Tselementes, a Greek chef in the early 20th century, is widely considered to have written the first Greek cookbook called Greek Cookery.

While you will find a version of baklava all over Greece, the delicious dessert consisting of layers of crispy pastry, pistachios, and honey is more closely tied to the Ottoman empire. This Fodor's Travel article notes that "Baklava of the Turkish kind can be found all over the city" of Athens. The Turkish version is usually served bite-sized with pistachios and a soak of rose-water syrup, while the Greek take is denser and filled with walnuts and honey in phyllo.6254a4d1642c605c54bf1cab17d50f1e

The Greek version is supposed to be eaten with a fork and a sharp knife–though it rarely is since the two are often confused. "Rather than being of one nation, baklava is a distillation of cultures, traditions, and ethnicities in a single dessert. It is not Turkish. Neither is it Greek," concludes the article.

This water-packed cow's milk cheese–including some of the most popular brands in the U.S.–would be unknown in Greece. The use of cow's milk isn't traditional in Greece due to the hilly nature of much of the terrain, which is better suited for goats and sheep, according to this article from the Pittsburgh Post Gazette. Greek feta is traditionally brine-packed and significantly more flavorful, plus it's made from goat's or sheep's milk.

True feta cheese must contain at least 70% sheep's milk and be produced in certain regions of Greece, but feta is far from the only cheese in Greece. Be sure to try Graviera, Kasseri, Kefalotyri, Kopanisti, Ladotyri, Manouri, Mytilinis, and San Michali.

A previous version of this article was originally published on January 27, 2022.