We Tasted 5 Greek Yogurts & This Is the Best

You can't mess with a classic.

Not all cultured dairy is yogurt, not all yogurt is Greek, and—most definitely—not all Greek yogurts are created equal. Sure, they're all thick enough in texture and high enough in protein to live up to the hype and health halo, but the industry's hit some sour patches.

Years ago, at the peak of this product's boom, domestic manufacturers came under fire for shortcutting the traditional, time-honored multi-straining process required to create true Greek yogurt. Instead, they introduced stabilizers and thickeners to regular yogurt in an effort to imitate the look, feel, and/or nutritional profile of Greek yogurt. Some brands—like The Greek Gods—quietly and inexplicably slip under the radar for their use of pectin as a thickener, while others, like Cabot Farms and Yoplait, were called out for their additives.

But today, for the most part, consumers and retailers have sussed out the real deal from imitators. In the years since it's entered the mainstream market, we've been refining our palates and are better able to discern quality Greek yogurt from those brands that are just phoning it in. Be wary of the presence of ingredients such as cornstarch, tapioca starch, pectin, gelatin, locust bean gum, and milk protein concentrate, which is essentially extra whey leftover from cheese factories. These are bright red flags that costs and corners are being equally cut. Real Greek yogurt is created by multiple instances of straining, leading to a more concentrated product (hence higher protein density) and lesser yield, as opposed to adding things that bulk up the volume, weight, and density.

We tasted five nationally available, commercially produced mainstream Greek yogurts by well-established dairy brands in a side-by-side comparison, and were shocked to taste what a world of difference lies between them. Here's which Greek yogurt we consider the best-tasting of them all, with the five brands we tried ranked from worst to best. And for more, don't miss The Best & Worst Greek Yogurts in 2021—Ranked! 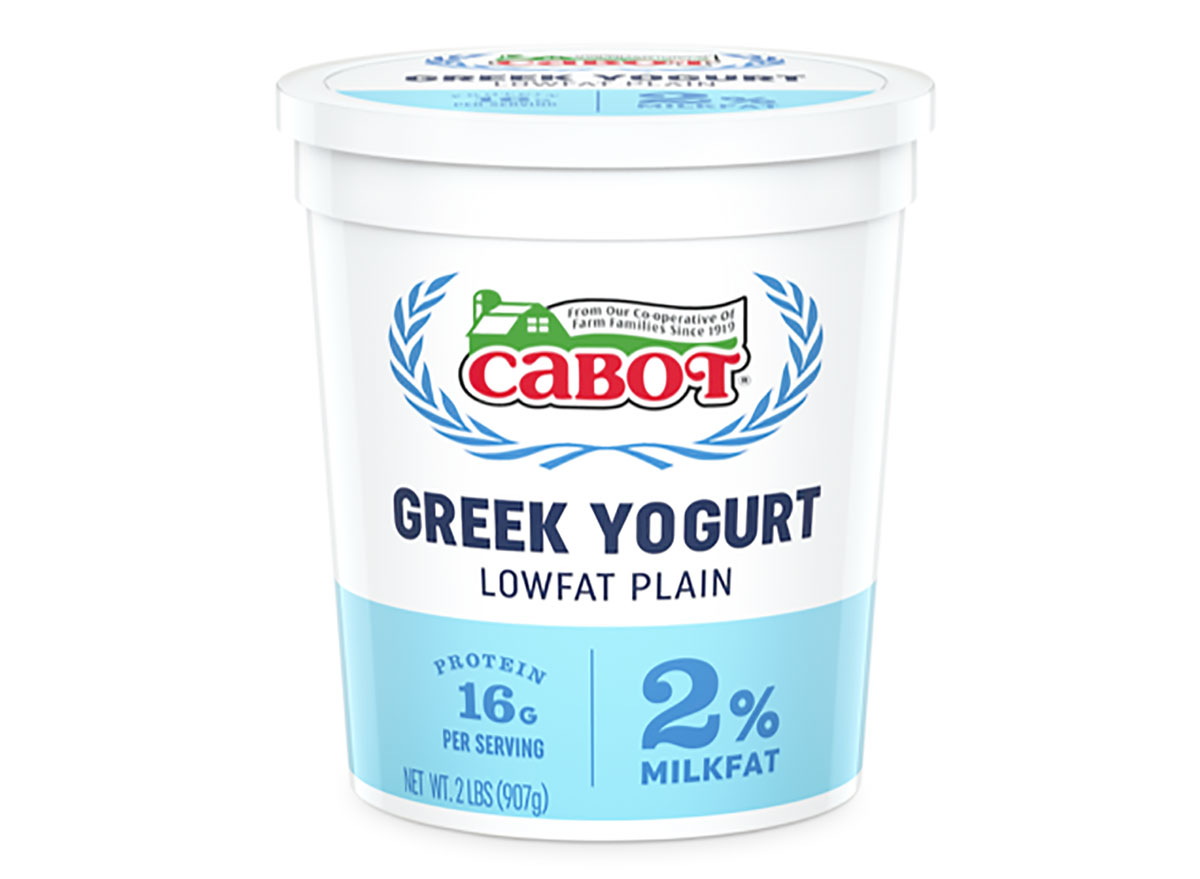 As mentioned earlier, this brand's entrant in the Greek yogurt race was marked with conflict for its use of space-filling thickeners instead of time-honored straining to give it heft and body. Food industry gatekeepers were up in arms about it in 2013, with major manufacturers expressing disgust and accusing them of "cheating." But as with Yoplait, the courts ruled in Cabot's favor, as the prohibition of additives is not explicitly written in the legal definition of yogurt. And so, they carried on with the same formula and process.

With all that drama, we had to see if the shortcuts cost any corners. A flat plastic lid and clear plastic seal covered yogurt that immediately struck us as very thick and strangely firm. Remarkably smooth with no visible whey, it was shiny and still held the pattern of the swirl of the machine that loaded up the tub. Visually, it resembled soft-serve ice cream that had begun to melt but then was quickly refrozen.

This similarity ended as soon as it was scooped. It came up soft in a spongey, gelatinous way, wobbling in solid form like a thicker form of silken tofu, but with a notable heaviness to it. The taste created another stop on its metamorphosing journey as it smushed dryly in your mouth with vestiges of salt, grass, and cheese. There was a lot of cheese flavor, actually, calling Turkish labneh to mind, but without the richness and with a mealy mouthfeel—odd because this one didn't look grainy at all, and yet was the only one that felt it. The salty cheesiness of it left us very thirsty, despite only a minuscule increase in sodium levels; the whey and milk concentrates perhaps played a factor in intensifying those cured qualities. This disappointing science experiment was the only yogurt tasted that had us reluctant to go back for second-chance clarifying tastes, making it the overwhelming worst. 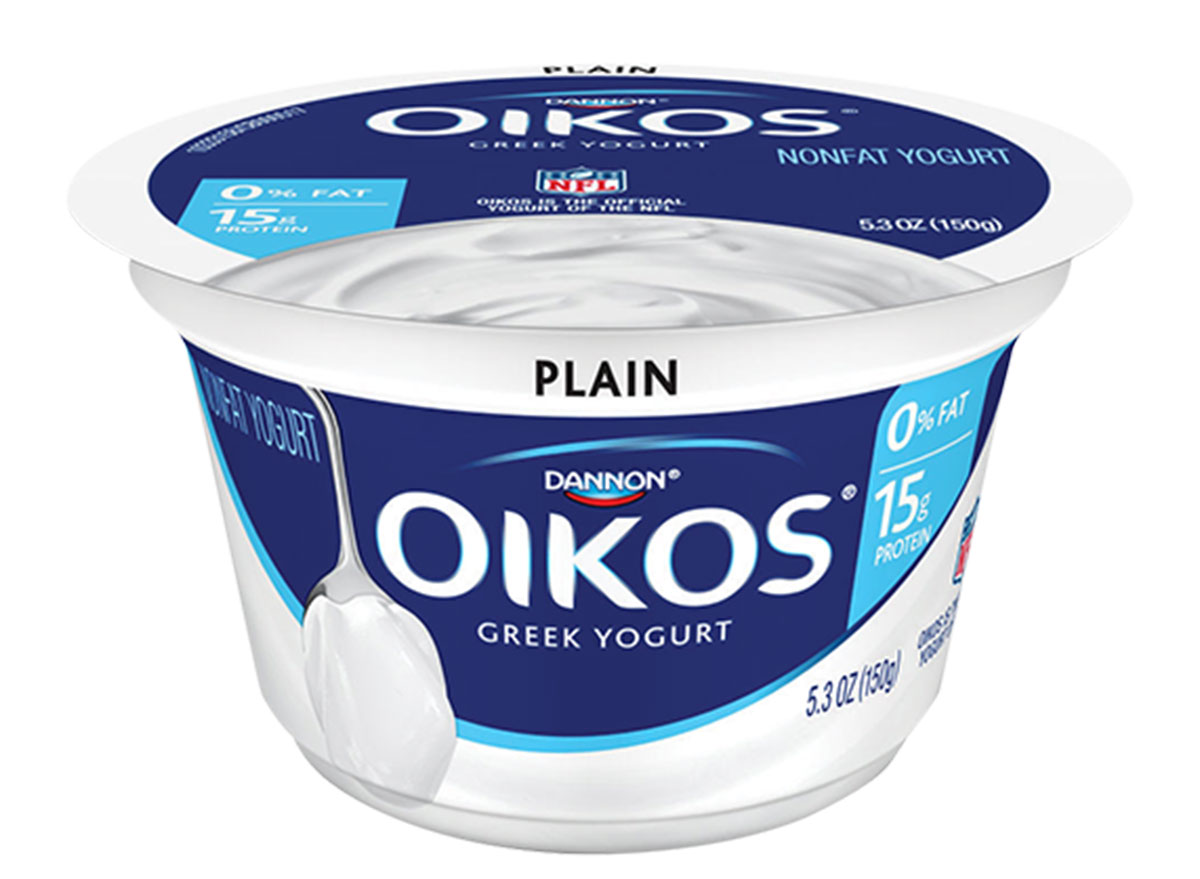 "Possibly the world's best plain Greek yogurt" is a lofty claim for this mainstream brand by domestic yogurt powerhouse Dannon. Made by the same manufacturers as the popular Light + Fit line, which seems to only be available only in plain in the bigger tubs, as well as Activia, and Two Good, the diversification seems to be an attempt across several lines to snatch the crown from the newer brands.

It's a fair effort. But in the case of Oikos, under a clear, flat plastic lid and sealed foil is yogurt that looks a little watery at first from its collected whey, and honestly, it looks kind of chunky. It starts off with a strong declaration of yogurtness, an unmistakable tang, and a slightly sour element taking the forefront. As you eat it, a hint of sweetness emerges before the tang returns for a finish that stays with you longer than the other brands I sampled. All of this happens quickly, and it melts very quickly and smoothly despite the first impression of chunkiness.

Oikos' strong flavor makes us curious whether there's a softer flavor to Dannon's other lines of Greek yogurts, which are marketed with more delicate, whimsical packaging. However, we weren't curious enough to add the nutritionally similar offshoots to this taste test, especially because all of them skimp on the live and active cultures. Oikos only uses two, and popular L. acidophilus isn't even one of them.

RELATED: What's the Difference Between Greek Yogurt and Regular Yogurt? 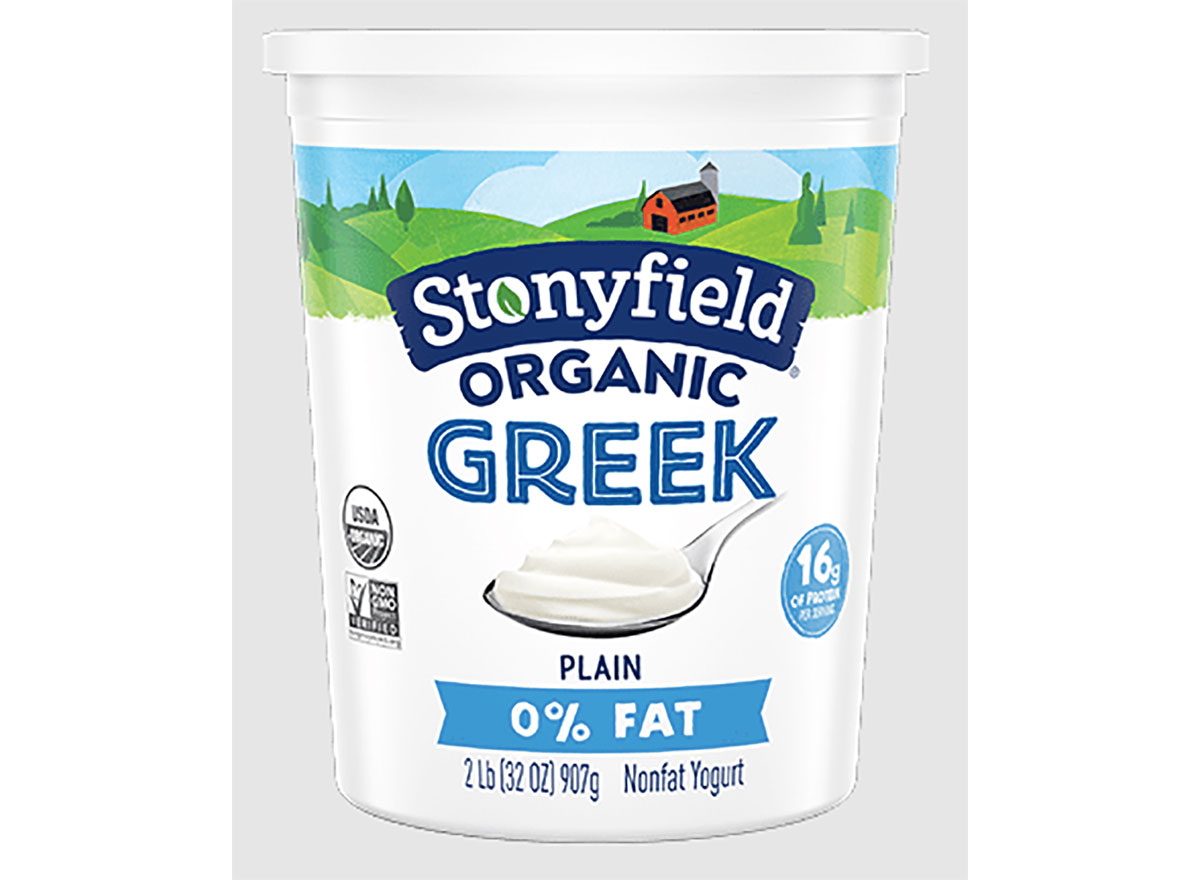 This leading brand relies on pasture-raised cows to provide the organic milk that goes into its yogurt, with a diet that lends more omega-3s and conjugated linoleic acids to every bite. In keeping with the rest of Stonyfield's product line, no toxic persistent pesticides, artificial hormones, or antibodies, are used to create this milk. Instead, its ingredient list is as pure and simple as the country's two leading brands: just milk and live, active cultures—in this case, five.

A traditional flat plastic yogurt lid—a departure from the clear, bubbled tops of Chobani and FAGE—reveals a clear, tight, plastic seal. There's not a lot of whey immediately visible on the surface, but as with Chobani, there's a visible mild granularity to the texture. This yogurt also has a medium thickness, holding its shape momentarily before slumping slowly on the spoon. At first bite, it feels and tastes light and collapses with little objection. For those who prefer a little less tang to their yogurt, this is a solid choice; that flavor is swapped for a slightly sweet, slightly salty undercurrent that finishes with a hint of soft cheese. It's not necessarily richer, but greener in a buttery way. Those traits are clear evidence of grass-fed dairy; a vegetative note comes through clearly when compared with conventional dairy milk yogurt. However, it's much less apparent when eaten independently and not immediately after other types.

America's leading brand for Greek yogurt, Chobani didn't perform as well as Fage in our taste test. Based in upstate New York as well as in a facility in Idaho, this brand prides itself on dairy sourced locally to its factories and is another strong proponent of eschewing shortcuts. To this day, this yogurt is still triple strained for thickness and made traditionally, but in keeping with Turkish traditions, not Greek, as a nod to the founder's heritage. Fun fact: It was only marketed as Greek to ride on the momentum its competitor Fage established.

Turkish yogurt can run more of a gamut in terms of thickness; Greek is supposed to be very #thicc. Chobani is not. At first glance, after taking off the plastic lid and peeling back the foil seal, there's a light level of whey liquid sitting up top that gets reabsorbed quickly and well into what initially looks like a subtly grainy, bright white yogurt. It doesn't have much structure on the spoon—it just kind of flops over rather than standing in firm, tall crests—and unsurprisingly from this cue, feels thin in the mouth. That's not to say it did so unpleasantly, though. It's much smoother than the granular appearance belies and is less creamy than it is fluffy. There's an airiness to it as it gently spreads, with a fresh, clean taste and feeling to it as it finishes with a slight zip borrowed from its full range of live and active cultures. 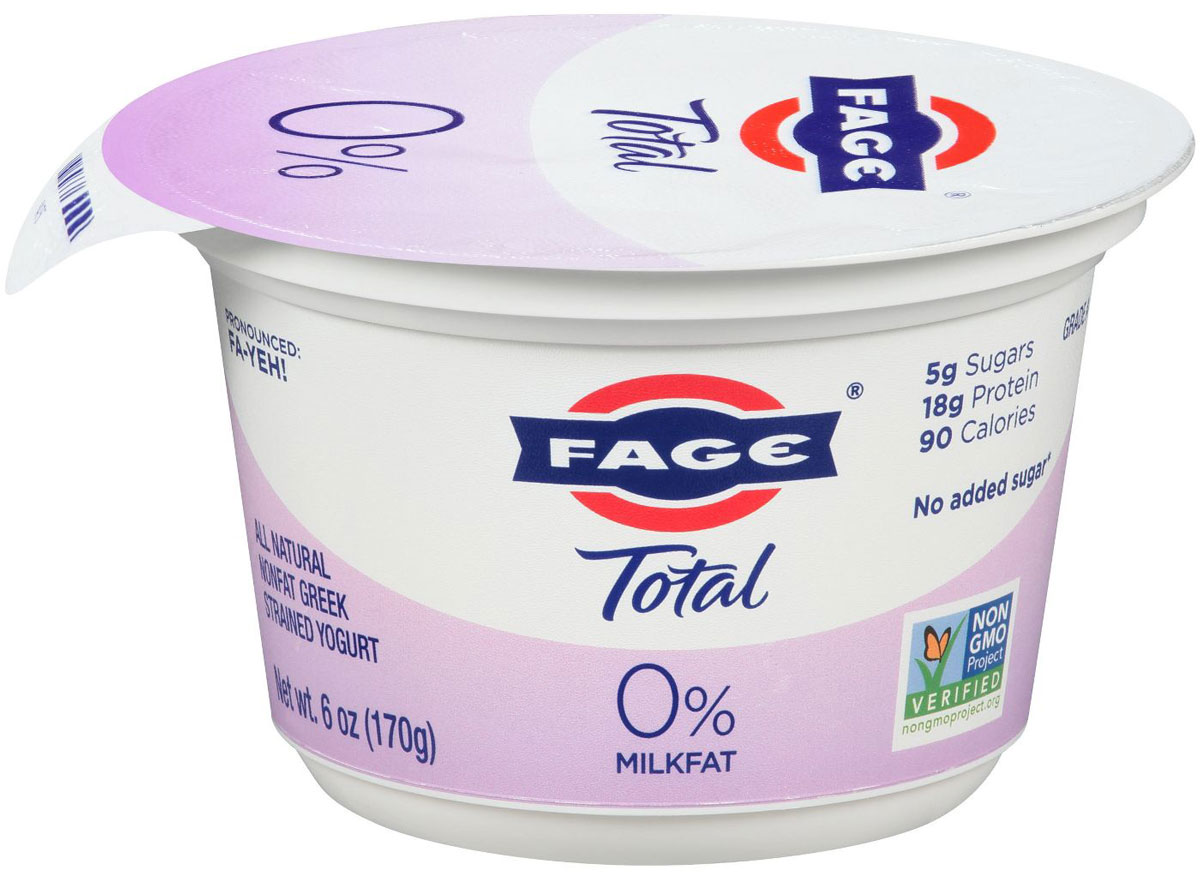 Luscious, rich, and creamy with a full-mouth feel, this genuinely Greek yogurt is also the number one best-seller in the place of its origin. Rooted in a small dairy shop that opened in Athens in 1926, it was only introduced to the U.S. market in 1998 in Astoria, Queens. One taste will explain its astronomical growth here, though. It's simply everything you want a Greek yogurt to be: smooth, thick, dense, and with a mild tang that finishes clean and sweet. It was the second to least watery of all the brands we sampled, and it had the most body and decadence. This is likely due to the fact that it's one of the most concentrated, strained versions—the company uses four pounds of milk to create one pound of yogurt.

This was also the most conscientiously packaged—under a plastic cover was an aluminum foil seal and beneath that, a round of parchment paper you're supposed to remove after opening. (Did you know that? Because we didn't!) Below that layer, there's pure dairy joy and five types of live and active cultures. It's heavy on the scoop, cutting a clearly defined swath across a dense sea of yogurt that even the light layer of whey can't penetrate without a stir. Thick and very rich despite being nonfat, Fage's yogurt has a satisfying chewiness to it that feels indulgent as it slowly, slowly melts away in your mouth. And there's no mistaking that the flavor is cream-forward; it's full-bodied with a sweet essence and subtle tang that is consistent from its start to the soft finish.

While Chobani comes up nipping at its heels for those who prefer a cleaner and less coagulated experience, Fage simply feels more luxurious in every way. The pioneers of Greek yogurt in America have remained true to their practices in Greece and it shows in the quality of their yogurt. It's thick to the point of plushness and richly creamy to indulgence. It provides an impression of sweetness while maintaining an undercurrent of mild tang, and feels smooth while still vibrant. All of these traits in the nonfat edition mean that the available 2% and 5% Total versions are even more so, with the additional satisfaction that even marginal amounts of additional fat can provide. For a true Greek yogurt experience, this authentic, from-the-motherland brand delivers it.

We Tasted 9 White Breads & This Is the Best

We Tasted 5 Mayos & This Is the Best

Su-Jit Lin
Su-Jit Lin is a food and lifestyle writer whose work has been featured in Real Simple, HuffPost, and more. Read more about Su-Jit
Filed Under
Dairy // Greek Yogurt // Groceries // taste test