From picking out the perfect ham to when to heat your oven, we have all the tips you need to pull off a flawless meal this holiday.

Nothing ties a holiday dinner together like a classic holiday ham. It's perfect glaze and tender meat is enough to make anyone's mouth water. But, making the perfect holiday ham takes a bit of effort and it's an easy meal to mess up. Ditch the holiday kitchen havoc this year with these tips and tricks for cooking the best ham for the holiday dinner table. And after indulging on holiday foods, try out these 50 Best Weight Loss Tips to get rid of all of that post-holiday weight.

Buy the Right Kind of Ham 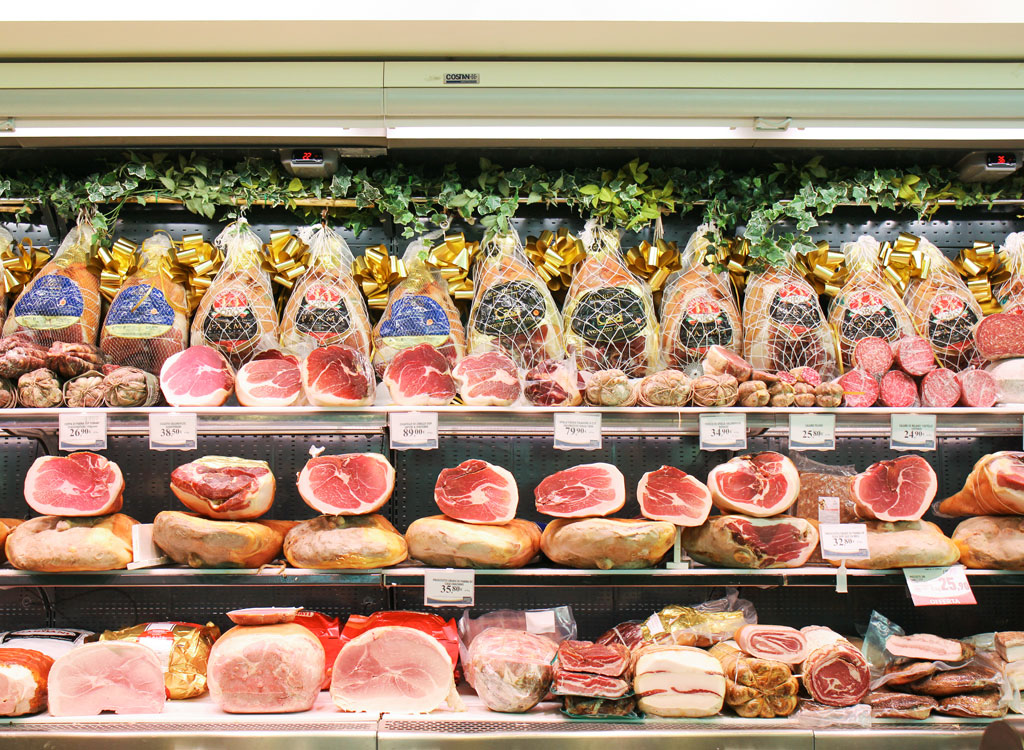 According to Serious Eats, there are two types of ham: city and country-style. Most hams on the market are city hams, which have been wet-cured with a brine and lightly smoked. Country hams are usually flavored with a dry rub, cured, and aged anywhere from four months to three years. Country ham is much saltier and has a chewier texture in comparison to city ham, so for a holiday ham, it is recommended to buy a city ham.

Hams with a larger water content are usually cheaper, but you'll be missing out on a lot of flavors. Hams that have high water percentages tend to lose their flavor, especially if they're boneless. So, instead of buying the cheaper ham for less meat, try going for the one labeled only "ham," and avoid ones labeled "ham, water added" or "ham and water product."6254a4d1642c605c54bf1cab17d50f1e 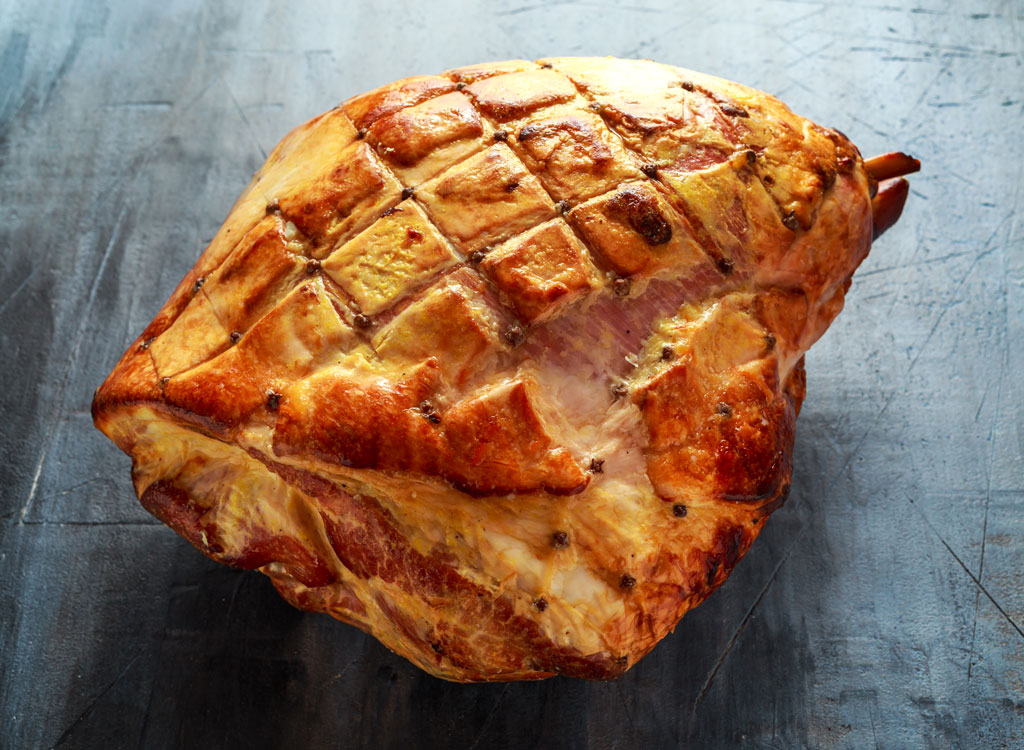 Boneless hams may be easier to cut, but you're missing out on tons of flavor that the bones contain. Also, most boneless hams lose flavor when they are being compressed into their signature football-like shape, and the holes left by the bones are usually filled in with ground ham. By purchasing a bone-in ham, you're having a more natural and flavorful meal that the whole family will enjoy.

Buy a Ham Big Enough For Your Family 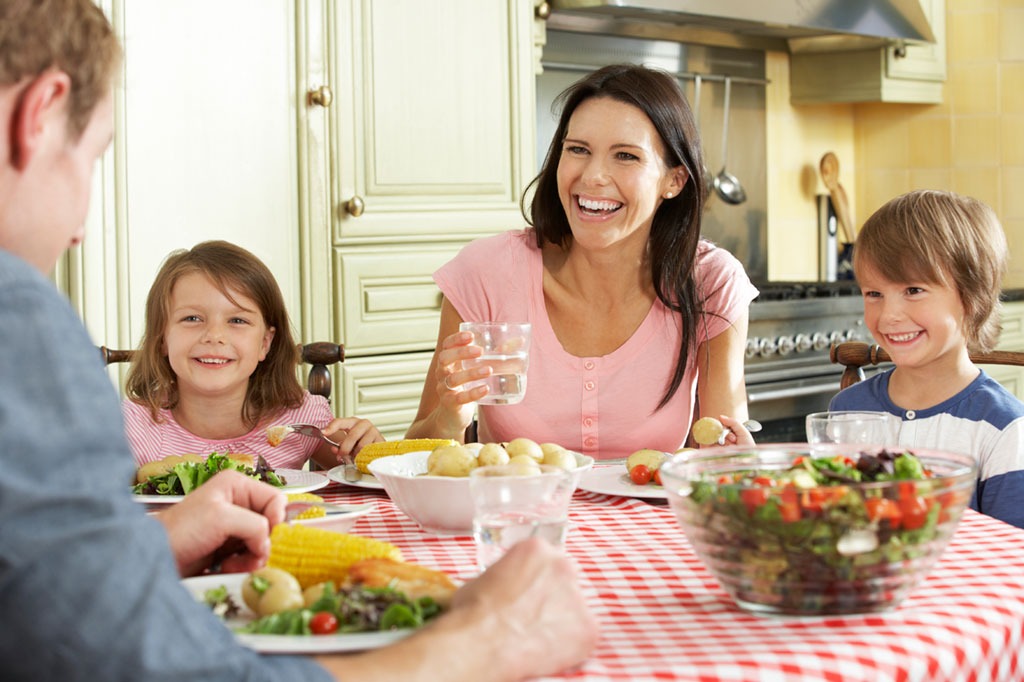 One of the biggest holiday dinner conundrums is when there isn't enough delicious food for the whole family to eat, so make sure you buy a ham big enough for everyone. The rule of thumb is to purchase either a boneless ham that's big enough to serve ½ pound per person or a bone-in ham that can serve ¾ pound per person (due to the bone being inedible weight). A ham around 7-10 pounds is enough to feed the average holiday party.

Unless you buy a fresh, uncooked ham from the butcher shop, marinating your ham is unnecessary. Most hams bought in the grocery or supermarket have been marinated and cooked already. Also, marinating it again can ruin the taste and make your ham too salty. A simple brine at the bottom of the tray you're cooking it in is perfect to keep your ham moist and tender.

Get Creative with Fruits and Vegetables

Adding hearty vegetables on the side with your ham, like carrots and potatoes, will add extra flavor and nutrition to your meaty meal. These veggies are filled with beta-carotene, an antioxidant that has been cited by the Memorial Sloan Kettering Cancer Center to help prevent cancer. Pineapple is also a great pairing for your ham, and it adds an extra boost of vitamin C to your meal, which is an antioxidant that has been shown in a review published by Journal of the American College of Clinical Nutrition to reduce the risk of cardiovascular disease.

When cooking most meats, it's important to preheat the oven before putting your ham in. It should be heated to the optimal ham cooking temperature (which we will get to later) before the ham is even in the oven, so your ham will cook right on time and still retain its flavor. 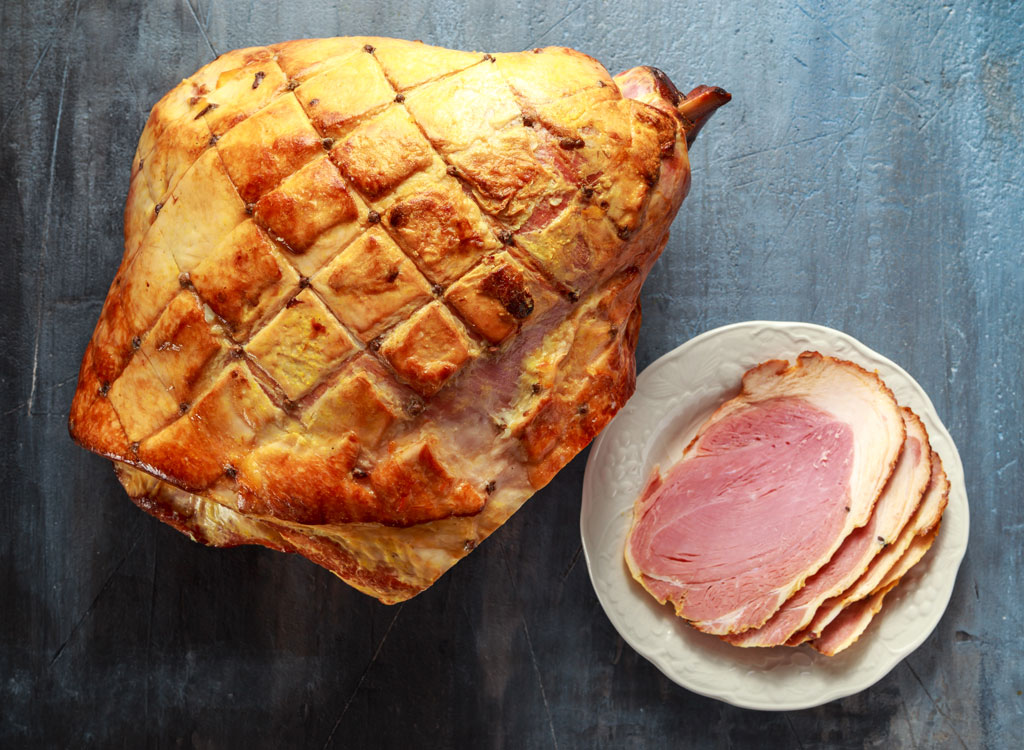 Scoring, or cutting hashes into the rind of your ham, will make your ham look nice and help it retain more flavor. When you glaze your ham, the glaze will seep into the ham easier through the cuts on the top, making your ham taste just as amazing as it will look. Just simply create criss-cross cuts across the top of your ham, and it's perfectly scored.

Wrap it in Aluminum Foil 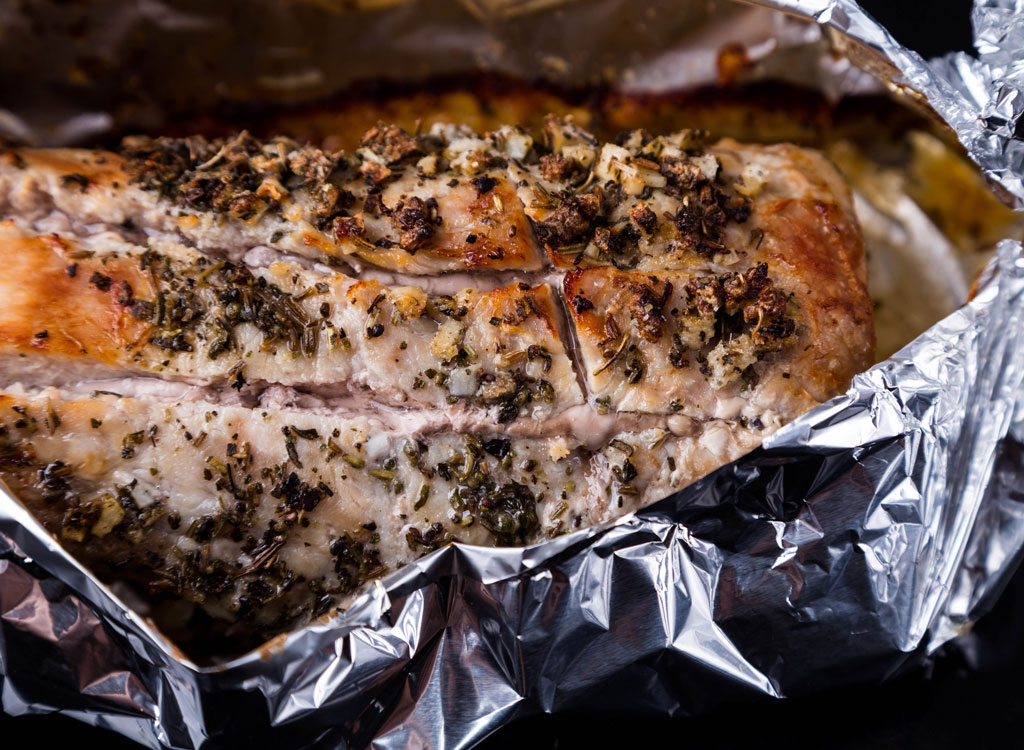 Wrapping your ham in aluminum foil or an oven bag before you put it in the oven will prevent it from losing any moisture. If you cook your ham without any coverage, you're putting it at risk of drying out and losing most of its flavor. No one likes a dry ham on the holidays, so make sure you're covering your ham to keep it tender and moist.

Most recipes call for cooking your ham at 325 degrees. It's lower than the temperature of other meats since ham is usually not sold raw, and takes less time to cook than your Thanksgiving turkey. Remember, you're basically heating up your ham, not fully cooking it.

Yet again, you're heating up your ham, not cooking it from its raw form. The easiest way to calculate how long you should cook your ham is to remember this tip: if your ham was sold fully cooked, then set the time for 10 minutes per pound. But if it is only partially cooked at the time of purchase, then time it for 25 minutes per pound. 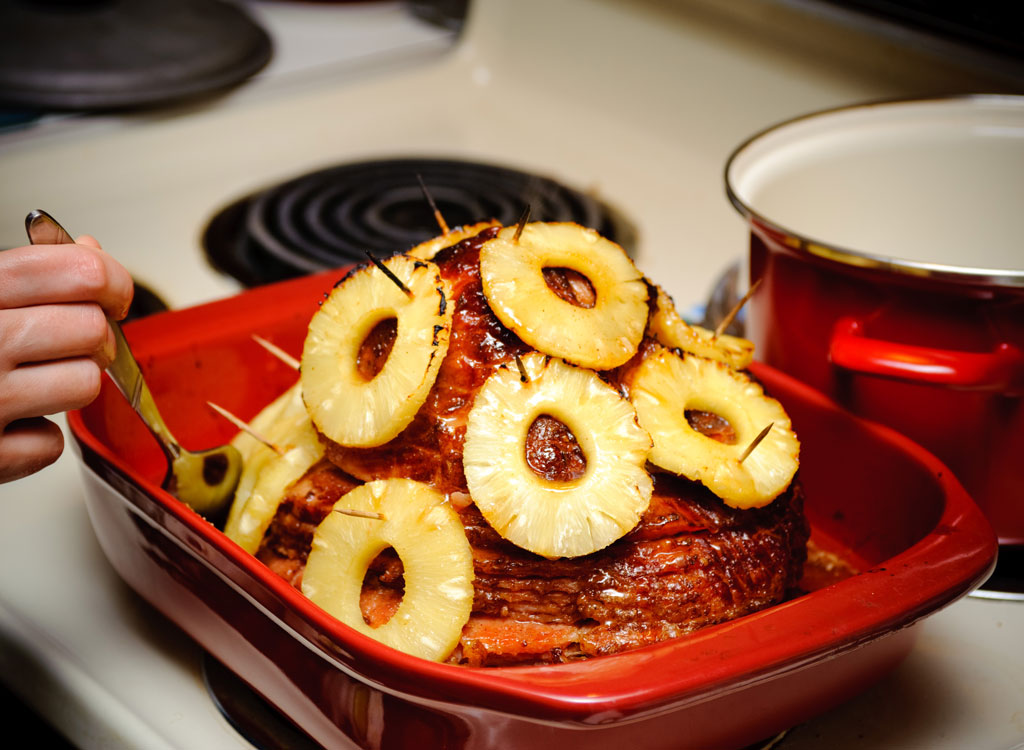 Basting your ham with a brine is another great way to keep your meat moist. Put a brine mixture at the bottom of the tray your ham is in, and baste it repeatedly throughout its whole cooking time. You'll be left juicy and tender ham that everybody will enjoy.

Glazing your ham is the only way to give it the delectable golden brown crust that makes for a delicious ham. You'll want a syrupy glaze that gives your ham a hint of sweetness. When your ham is about 15 minutes away from being fully cooked, brush the glaze all over it, then turn the heat up to 400 degrees so the glaze cooks into the rind. To make the flavor of the glaze pop out, brush the ham over with glaze two or three times within the last 15 minutes of cooking. 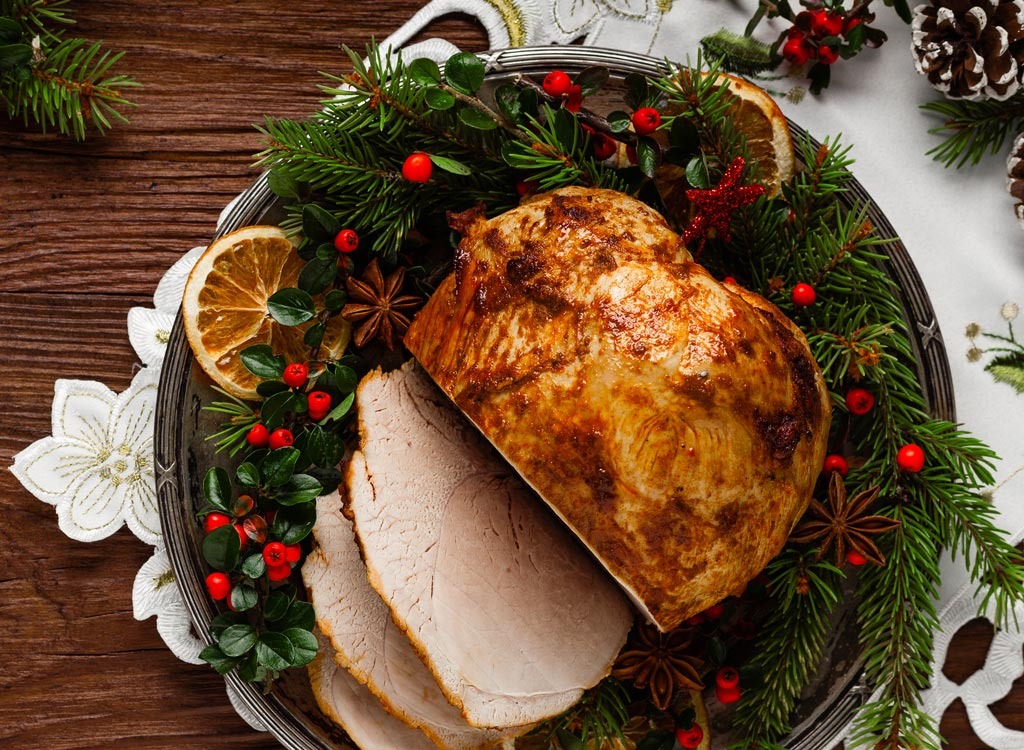 Like most meats, it's easy to overcook and dry out your ham. Overcooked ham is a dry and stringy-textured mess. To avoid having a dry and flavorless ham, make sure you cook your ham at 325 degrees at most and use a brine and glaze when cooking it to retain its moisture and taste.

Make it in a Slow Cooker

If you want as minimal work as possible for this holiday meal staple, try slow cooking your ham. If your slow cooker is large enough (a six-quart slow cooker would work best), you can easily toss in your ham with a brine and some of your favorite veggies to make a tender, juicy holiday ham. And, this isn't the only holiday meal you can cook in your slow cooker. Try out these 50 Cheap and Easy Slow Cooker Recipes this holiday season to have a perfectly cooked meal without all of the stress of conventional oven and stove-top cooking.