McDonald's vs. Wendy's: Which Is Better?

Whether you'd bet on Ronald McDonald or Wendy Thomas in a fight, there's more to these fast food joints than their redheaded mascots. Which chain would you back if the menu was involved?

It's happened to the best of us. You're exiting the freeway after a long day at work and all you want is a quick, cheap meal to head home with. But then you're confronted with an age-old dilemma, a Wendy's and McDonald's right next to each other. All of a sudden, this seems like the hardest decision you've had to make all day. With McDoubles and Baconators dancing in your head, you panic and gas it to the one with the shorter line.

Life's full of difficult choices, but deciding which drive-thru to enter should not be one of them. We're here to make sure you can pull into the right parking lot with confidence when you spot those familiar red braids or golden arches. But if you're a die-hard Mickey D's lover who's never had this problem, we've got you covered too with a list of McDonald's menu ranked!.

How The Standards Stack Up

There's a time and a place for everything and sometimes you just need a cheeseburger and a side of fries. But how does a classic McDonald's meal compare to the same order at Wendy's?6254a4d1642c605c54bf1cab17d50f1e

You'd think eating a Quarter Pounder and a Dave's Single would be equally bad decisions since they're both cheeseburgers with the same amount of beef between the buns, but that's not the case. While the McDonald's version has 530 calories and 27 grams of fat in it, the Wendy's burger has an additional 40 calories and 7 grams of fat. Looks like there's more than just round or square patties setting these apart!

The fries follow a similar pattern. Even though both chains fared well on our list of Every Fast-Food French Fry — Ranked!, ordering a small at Wendy's comes with double the salt at 320 milligrams. It also packs 320 calories and 43 grams of carbs, compared to 230 calories and 29 grams of carbs at Mickey D's. Although you may forget these specifics, we'll boil it down to basics for you: a small fry at Wendy's has more in common with a medium order at McDonald's. Seems like a clear choice to us.

But when it comes to other fan favorites, it's the Jr. Vanilla Frosty at Wendy's that knocks dessert out of the park. 27 grams of sugar aside, this 190-calorie treat ranks much lower than a 230-calorie baked apple pie from McDonald's in both fat and sodium, making it a more diet-friendly dessert.

Where The Health Is Hiding 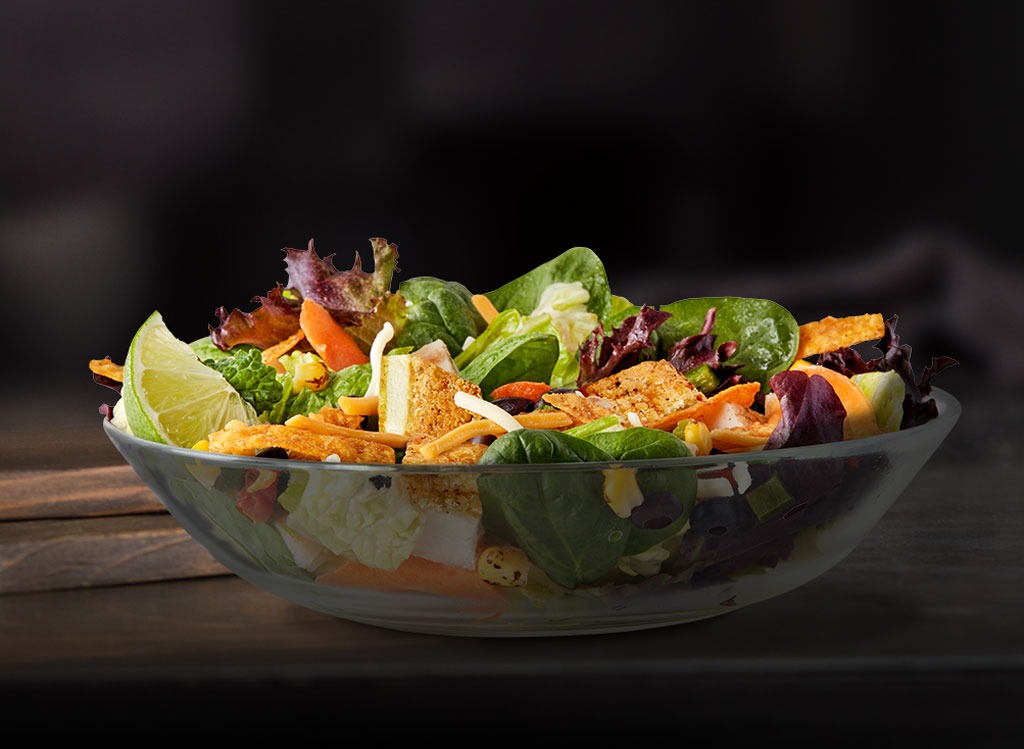 When you wind up at a fast food place in the middle of a diet, your first instinct may be to order a salad. But take a step back before you make your selection and consider this — some high-calorie salads can do more damage than a burger. If you avoid options with crispy chicken and fattening dressing, your best bet at Wendy's is a Power Mediterranean Chicken Salad. Although it's got 1,200 milligrams of sodium, it's only 480 calories with 43 grams of protein. You should feel even better about going for the Southwest Grilled Chicken Salad since it has 350 calories and 37 grams of protein.

And speaking of grilled chicken, a grilled chicken sandwich from either place is always a great choice. At both McDonald's and Wendy's, you're looking at under 400 calories and less than 45 grams of carbs. Even though the buns aren't making it on the list of healthy carbs, you can count on getting over 35 grams of protein in each sandwich.

But if you're starting your day with Ronald and Wendy, you're probably not craving chicken — in sandwich or salad form. Luckily, McDonald's has your back with an extensive breakfast menu. Wendy's, on the other hand, has limited options. There are only two egg sandwiches on its menu, the healthiest one having 360 calories and 19 grams of fat. While this is better than some of the not-so-good Mickey D's options, it isn't as good as the classic Egg McMuffin or the Egg White Delight McMuffin, which has only 260 calories and 8 grams of fat. Now that's what we consider a guilt-free morning!

You may be under the impression that all fast food is created equal, but your body can tell the difference even when you can't.

So although Wendy's is the only one of these two chains with a Dollar Menu and it has always served fresh ingredients, something McDonald's has only just started to try, you should still go for the golden arches when you can. A trip to either one can be as healthy or as unhealthy as you make it, but McDonald's makes things a little easier.

In addition to the Egg McMuffin and Southwest Grilled Chicken Salad we love, the Chicken McNuggets and McDoubles are also great options. With all that variety on the menu, you've got a better chance of ordering an Eat This!-approved meal. As long as you don't order anything on our list of worst McDonald's menu items, you're probably in the clear.