Thin families aren't entirely about genetics. Daily mealtime habits play a huge part in how round each family member becomes.

There are few things that Americans agree on, but here's one of them: Eating dinner together as a family is a good idea.

The Walking Dead zombies eat together more often than today's families. For most of us, getting the whole group together for mealtime is a ritual reserved only for Sunday nights or special occasions. Otherwise, it's the drive-through gobbled in the car, the takeout snarfed in front of the TV, or the leftovers shoveled down while standing over the counter.

This hurried style of eating spells trouble for a lot of reasons. Number one among them: Families who eat together stay lean together. In fact, in one study, 80 percent of kids at a healthy weight eat dinner with their families at the table compared to 55 percent of overweight kids. Families of overweight kids mostly tend to eat in family rooms, offices, or in bedrooms.

Set the table for a lifetime of healthy living by setting the table tonight. Use these Eat This, Not That!-approved tactics to fool your kids into eating right—whiles you stay slim, too!—and feel free to turn to these 40 Dinner Ideas That Don't Need a Recipe for when you need a simple, satisfying meal!

You may think you're imposing portion control by dishing out servings for your kids; but in fact, you're robbing them of a very important lesson. When kids serve themselves, they learn to read their own body's hunger cues, according to a recent study printed in the Journal of the Academy of Nutrition and Dietetics. Children who are given control at the dinner table are also more likely to try new foods, the researchers said. It's just one way you can be a great dad or mom. 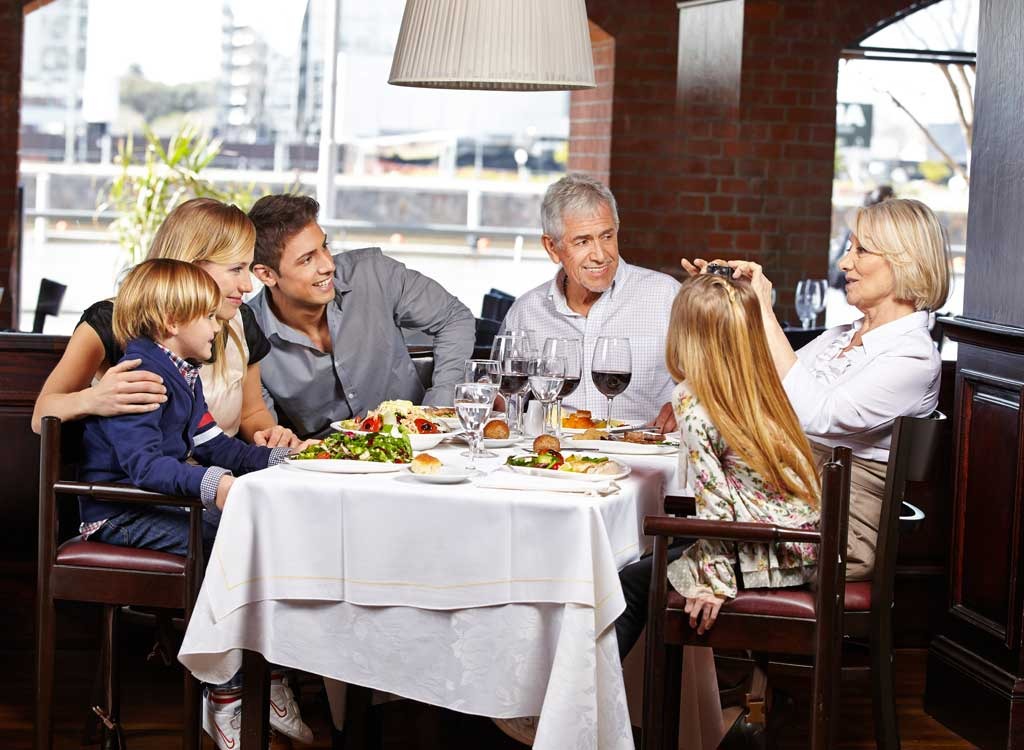 Research says four and a half minutes is the difference between how long healthy-weight kids spend at the dinner table and how long overweight kids spend there—18 minutes on average for the slim kids and 13.5 for the heavier ones. That might not make a lot of sense; more time at the table means more time to eat, right? Wrong. Eating slower means eating more mindfully, and not shoveling down food in an attempt to get back to whatever else is on your mind.

They Leave a Little on the Plate

Whether it's taking your membership of the Clean Plate Club too seriously or simply guilt about starving kids in Africa, efforts by parents to get their children to eat healthy foods can backfire. In a study of 63 children, Cornell researchers found that those whose parents insisted on clean plates ate 35 percent more of a sweetened cereal later in the day. If kids ate 35 percent more than one serving of Froot Loops every day for a year, they'd gain four pounds from that one habit alone. Rather than forbidding certain foods, set up specific parameters for when treats can be enjoyed. If overeating is something you do yourself, scope out these 15 Things Celebs Do to Stop Overeating.

They Put Away Electronics 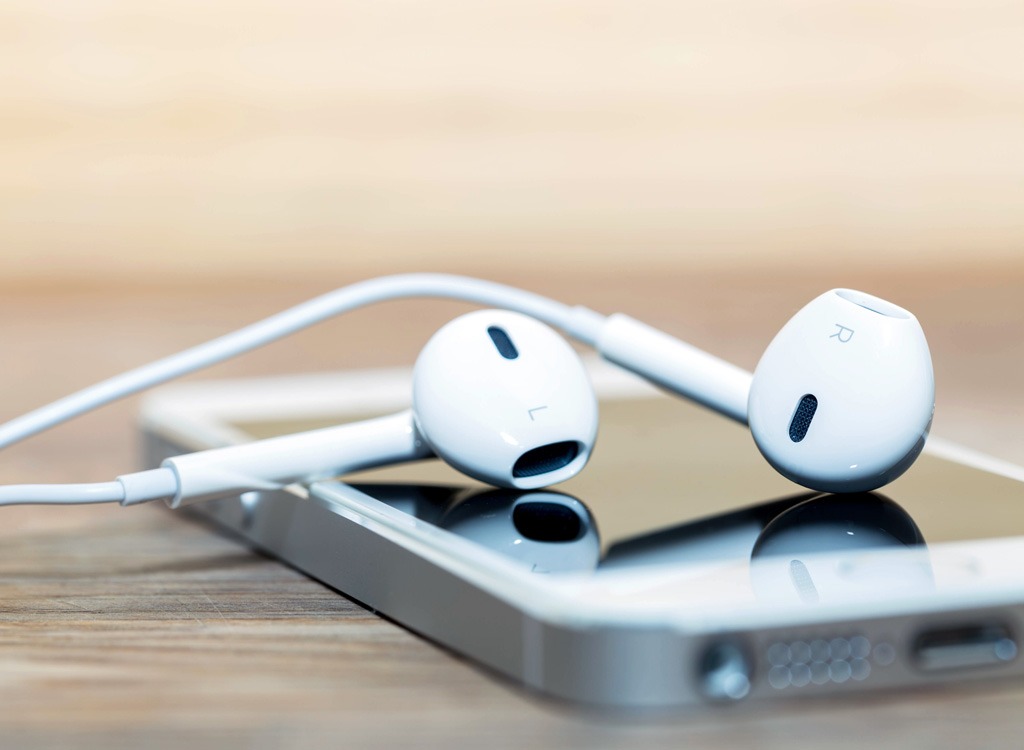 Parents who let their teens use electronic devices or watch TV during family meals tend to serve less nutritious food and have poorer family communication, a study by the University of Minnesota suggests. Researchers found families that reported frequent media use at meal times also served up less fresh fruit and vegetables and more sugar-sweetened beverages. In fact, distracted eating is almost as dangerous as distracted driving: A separate study published in the American Journal of Clinical Nutrition found that distracted eaters consumed 10 percent more in one sitting than they would otherwise.

They Use Smaller Bowls & Plates

Our eyes always tend to be bigger than our stomachs. A recent Cornell study found bigger bowls (16 oz vs 8 oz) caused children to request 87 percent more food and eat 52 percent more of it than they would otherwise. And while adults aren't as susceptible to the visual illusion, research printed in The Journal of the Federation of American Societies for Experimental Biology (FASEB) found larger bowls caused people to serve and eat an average of 16 percent more. And with the typical manufacturers' snack package being 2.5 times bigger than the appropriate amount for young kids, health-conscious parents fight an uphill battle. So, control what you can. Keep in mind that restaurant portions—even for kids—are egregiously oversized, so don't force them to wolf down every last tater tot. Splitting a dish with a sibling while eating out is never a bad idea. But these 17 Kids' Meals Worse Than An Ice Cream Cone should always be avoided, halfsies or not!

They Ask the Kids if They're Hungry

Researchers at the University of Illinois suggest that asking the right questions can help children listen to important hunger and satiety signals. So, acknowledging an empty plate with a question like, "Did you eat enough?" or "Are you still hungry?" is more conducive to teaching intuitive eating habits than a simple "Are you done?"

They Try All Sorts of New Foods

Kids avoid veggies as if they're out-of-style sneakers; only one in five of them actually eats enough plant matter. If you want to reverse that trend, a little scheming can go a long way. Research out of England found that giving children a taste of a new vegetable daily for two weeks increased their enjoyment and consumption of that food. Giving kids ownership over what they eat is also a powerful play. Turn a trip to the supermarket into a treasure hunt, and let them try to find produce they've never eaten before; more research shows that letting your children choose their vegetables can lead to an 80 percent increase in their consumption. Here's What Happens to Your Body When You Don't Eat Enough Fruits and Veggies, if you need a refresher!

In less than five years, the percentage of our calories that come from food outside the home has risen to 43 percent—the highest since the USDA began tracking such statistics. Parents' increasing penchant for restaurant food or delivery can translate to nutritionally unsound decisions by kids. One study laid the heaviest blame on fathers. Researchers at Texas A&M University say dads carry the most influence largely because when they take their kids to, say, Burger King, it's often as a treat. This enforces the idea that unhealthy eating is positive. Next time it's Day with Daddy, choose a restaurant without Big Macs. Watch your own waistline by also steering clear of these 20 Shocking Foods With More Fat Than a Big Mac!

Everyone Minds Their Manners

We're not just talking about keeping your elbows off the table. Putting your fork down between bites and eating slowly are both great ways to eat mindfully—a healthy habit that fights the urge to overeat and helps you reach that extra 4 1/2 minutes we mentioned earlier. Counteract the tendency to eat non-stop by putting down your silverware between each bite to rest. This gives you the perfect amount of time to add to the dinner conversation and gives you the chance to gauge your hunger level before taking another bite.

Study after study shows that people who are dehydrated tend to think they're hungry and that drinking water before a meal leads to smarter eating habits. Not only does your family reap the benefits of H20, making sure everyone has a full glass of water before, during, and even after the meal can minimize your family's urges for soda, juice, and other bad-for-you beverages. If your kiddos (or you!) hate plain water, then try any of these 50 Flavored and Infused Water Ideas instead—no sugary powders needed!