Imagine you walk into a restaurant with your date. The hostess sizes the two of you up, then bends her head and announces into the microphone, "Table for five!"

Nasty, embarrassing—and inconceivable, right? So why do you let that very same restaurant serve you with exactly that attitude—as though you're eating for two or more?

Oversized meals at restaurants are not only more common than ever, but they may be the number-one reason why we can't lose weight. That's the finding of a recent review of more than 60 studies by researchers from the University of Cambridge. The scientists found that if we simply eliminated large serving sizes, we would cut up to 527 calories off of our daily intake—enough to make a swing of more than 50 pounds in just one year.

While they advised using smaller plates and reduced portion sizes at home, the researchers said that jumbo meals at restaurants were a major issue: If restaurants stopped training us to expect enormous portions, it would help us to understand what a proper serving size looked like. But until that happens, be on the lookout for heaping plates of crazy calories. The editors of Eat This, Not That! put their waistlines on the line to suss out the 13 Most Over-the-Top Servings in America's Restaurants. See why steering clear of outrageous portions is one of our 50 Best-Ever Weight-Loss Secrets from Thin People! 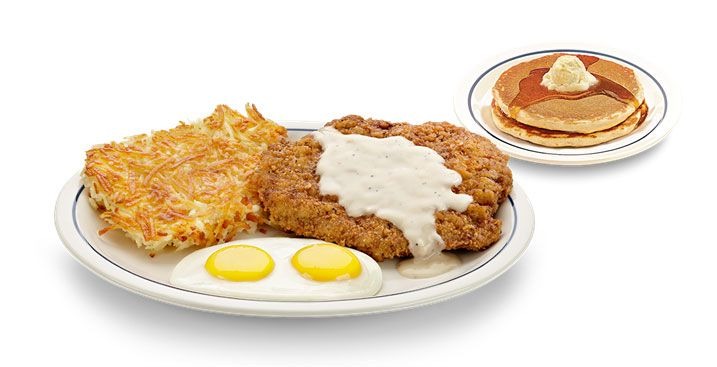 Even if you didn't consume another bite for the next 24 hours, you'd still have eaten more calories than an average man should consume in a whole day. IHOP should change its name to IROLL, because that's how you're going to be getting out the door.

Classic Eggs and Bacon with Breakfast Potatoes and Seasonal Fruit

A nice punch of protein to start your morning, even if it is a bit high in sodium.

A great example of how too much of a good thing can go bad: While these hotcakes boast flax, sunflower and sesame seeds—giving them 5 grams of protein per disk—there are four enormous pancakes stacked up here. And more than 200 grams of carbs is no way to start your day unless you really are a lumberjack, especially since the more pancake you have, the more syrup and butter you need to add.

Oatmeal is a slow-burning carb that provides long-lasting energy. Make similar smart choices all day long with these 11 Eating Habits That Uncover Your Abs! 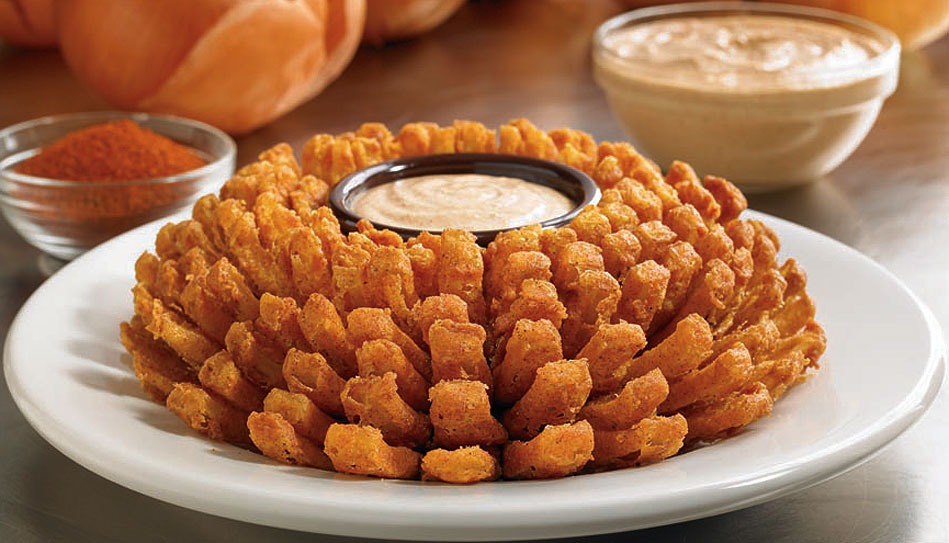 Okay, we'll concede that Outback claims their Bloomin' Onion is meant to serve six, but let's face it: how often do you see half a dozen folks at one table? By training us to see such monstrosities as appetizers, Outback completely distorts our normal view of portion size.

Not only do you strip away nearly 1400 calories, but you get a nice dose of healthy monounsaturated and omega-3 fats, instead of the inflammatory omega-6 fats in the Bloomin' Onion. 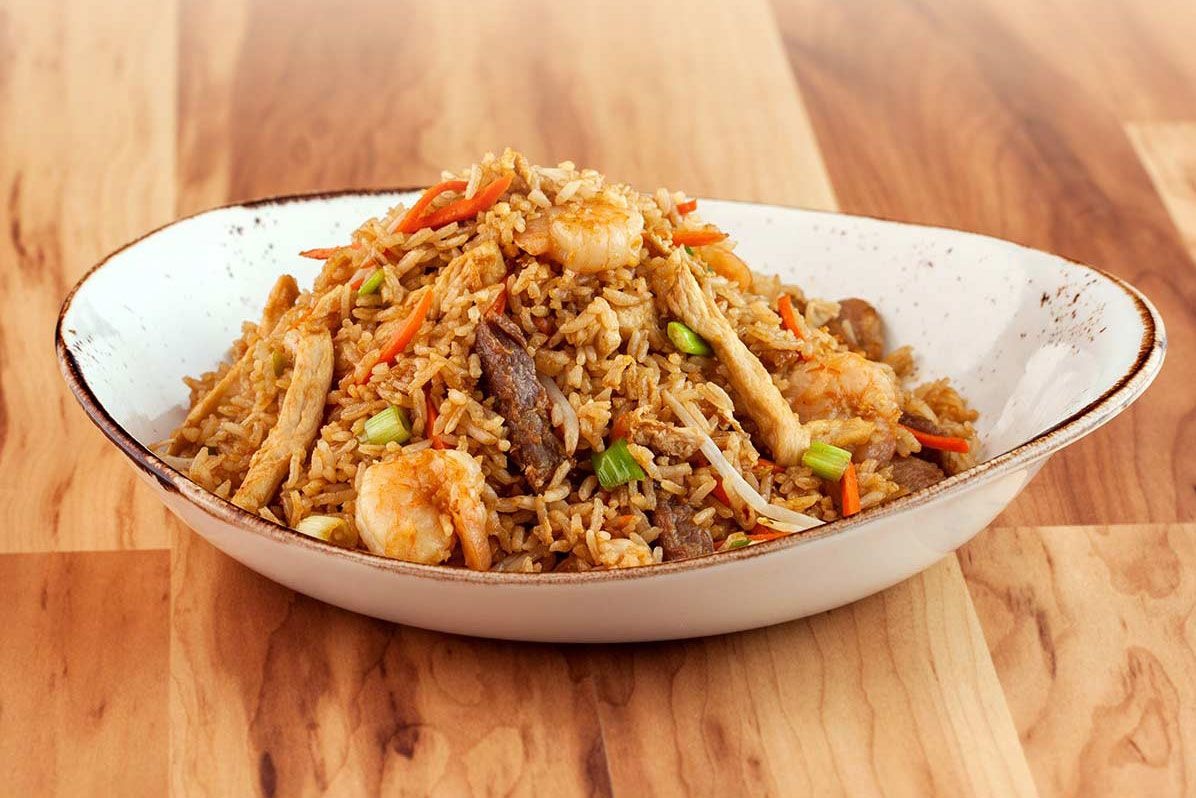 It's great that Chang's offers gluten-free options, but do they have to pack so much fat onto your glutes? With more than a day's worth of sodium, this is probably the least healthy item on the menu, and gives the distinct impression that if it's gluten-free, you can eat all you want. Wrong. Many gluten-free foods cover up the missing wheat by adding additional fat and sodium.

Like the rest of its menu, most of Chang's GF entrees top 2,000 mg of sodium. That's why giving up gluten isn't always the best way to lose weight. What is? You can satisfy your cravings for almost any cuisine (and leave nasty restaurant additives behind) with the 150+ delicious, fat-melting recipes in the new Zero Belly Cookbook!

A taco is a sandwich. So why would you think that three sandwiches makes for a normal serving? But that's what this standard order comes with, and On the Border ups the nutritional insanity by coating these slabs of fish with a thick jacket of oily breading.

On the Border doesn't offer a healthy fish alternative, but these tacos are a solid protein option, and they deliver 11 grams of fiber.

Better yet, put some salmon on the grill at home — it's one of the 29 Best-Ever Proteins for Weight Loss! 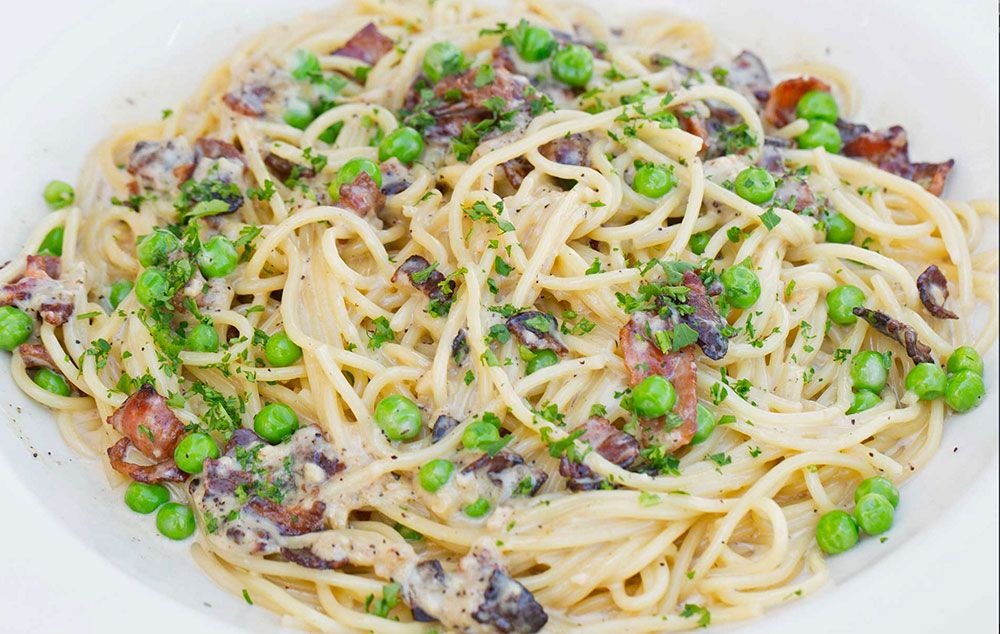 That's the calorie equivalent of: 11 Stouffer's French Bread Pepperoni Pizzas in a bowl

Cheesecake Factory won't release their nutritional information, and when you understand just how loaded their entrees are with unnecessary calories, you'll understand why. This dish alone has more than a day's worth of calories—and that's before you order a slice of cheesecake, which rates anywhere from 800 to 1,110 calories per serving.

One of the few pasta dishes at the Factory that won't leave you feeling like you've been through the mill.

The saturated fat content of the Three Tenors. A combo of chicken parmesan, lasagna bolognese and cannelloni bolognese, it's cheese on meat and meat on cheese wrapped in a noodle coffin.

Given that Romano's invented the "Fatbread," their commitment to carb overload is well established. This new lunch menu item is one of the few pasta meals that will satisfy your carb cravings with some measure of caloric restraint. To get your carb fix and melt fat at the same time, seek out these 25 Carbs That Will Uncover Your Abs!

This supermelt has every diet-busting base covered—fried chicken strips, Ranch dressing and bacon. Add a classic Friendly's dessert and you've got a day's worth of calories, easily.

The majority of the fat in this sandwich comes from the bread. If you can go without having it grilled, you can save 11 grams of fat. "Grilled" food that's actually cooked on an oil-soaked griddle is one of the 11 Restaurant Scams That Sabotage Weight Loss — don't fall for it!

That's the calorie equivalent of: 3 Whoppers

Yes, Cheesecake Factory appears again, this time with the absolute worst salad in America. Truth be told, nearly every Cheesecake Factory salad dwarfs a Whopper (or two, or even three). The exception is the Weight Management salad menu, which provides rare decent options.

Unfortunately, the Cheesecake Factory isn't alone in serving up belt-busting salads. Stay far away from these 19 Salads That Are Worse Than a Whopper!

It'd be one thing if this were a one-time gimmick just to nab headlines, but the chain proudly features the Triple Triple front and center in its marketing and website: 9 burger patties with 9 slices of American cheese, stacked high. This one will take you way, way back—ideally to a time before you ordered it, so you can make a smarter swap. Throw in a side of fries (260 calories) and a Regular Mint milkshake (1,070 calories) and you've got a 3,110 calorie meal.

Better yet, stay at home and make the #1 Burger For Weight Loss! It's just one of the 150+ easy and delicious recipes in Zero Belly Cookbook, the brand-new book from Abs Diet creator David Zinczenko that helped panelists lose up to 16 pounds in 14 days: Find out more now! 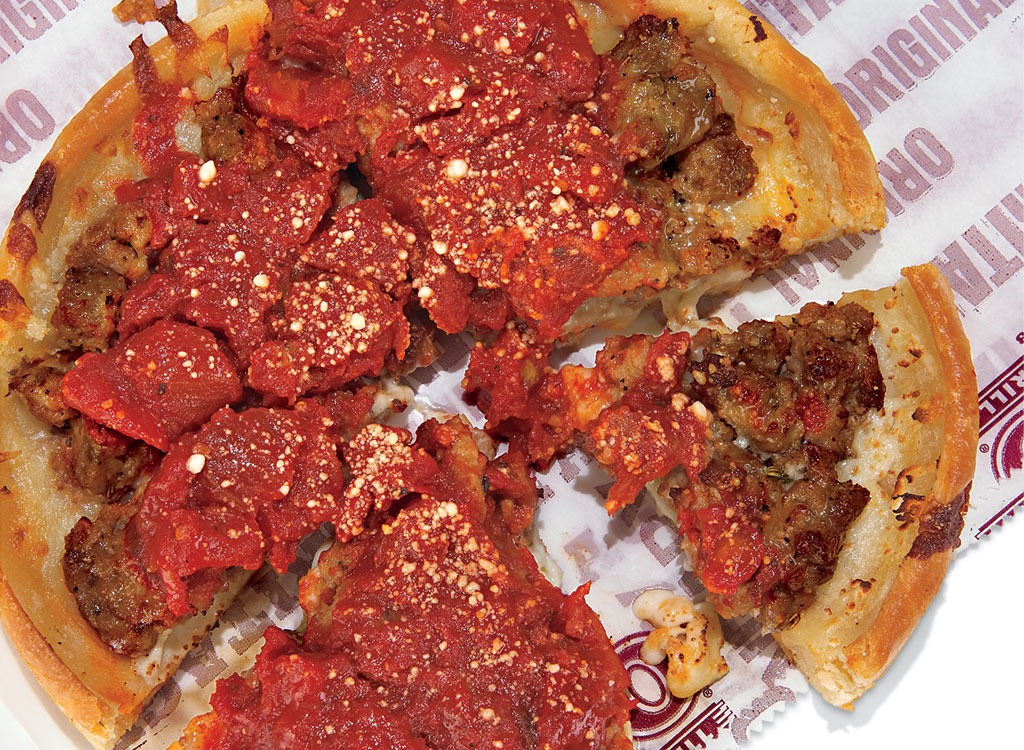 The thick crust is obviously the main caloric culprit, but we are baffled how they manage to fit that much fat into a small circle of dough. A Frisbee-sized pizza that's as thick as your wrist does not make for an "individual serving."

The only way to get your pizza fix at Uno without ingesting 1,000 or more calories in one sitting is to eat half of a thin-crust pizza.

Attack of the beige! Whenever your dinner is monochromatic (in this case, the off-brown hue of deep-fried junk), you know you're in trouble. Don't blame the fish—seafood is packed with lean, muscle-building protein and heart-healthy fats. No, the trouble here lies with a massively unbalanced fish-to-fat ratio. A coating of crispy batter and a heaping pile of deep-fried potatoes is no way to treat the golden child of nutrition—and this dish has twice the calories of most entrées at Red Lobster. Plus, trans fats? Really? When it comes to seafood, always abandon ship on fried fish and opt for grilled instead.

A simple swap that saves you an amazing 100 grams of fat! Keeping a handle on portion control is just one of these 33 Lazy Ways to Flatten Your Belly — Fast!

To give you an idea how crazy this dish is, a 180-pound man would need to run 20 miles to burn off that many calories. And this is only the dessert! Add your appetizer, entrée and your drink, and it's easy to amass three day's worth of calories in one meal at this restaurant.

And instead of a coffee, pair it with a cup of green tea. It's such an effective metabolism booster, we made it part of our brand new weight-loss plan, The 7-Day Flat-Belly Tea Diet and Cleanse! Test panelists lost up to 10 pounds in just one week!