This Is What Movie-Theater Foods Looked Like in the 1970s

If you had Good & Plenty and a tub of popcorn, you were golden.

For most of us, "going to the movies" isn't just about seeing a movie. Rather, it's a powerful multi-sensory experience—one so powerful, in fact, that there's a decent chance the mere suggestion of going to the theater has your mind drifting to thoughts of popcorn and candy. That's why theater owners sometimes joke, "We're not in the movie theater business. We're in the popcorn and candy business."

But if you're wondering what previous generations ate at the movies, or just want to take a trip down memory lane, we've got you covered. Here are some classic movie theater foods from the '70s—and yes, popcorn tops the list.

Popcorn, always first in our hearts

Just as it is today, popcorn was a movie theater staple in the 1970s. It was also the first movie theater snack, the one which started it all back in the 1930s. Although movie theaters had been around since the turn of the 20th century, snacks weren't part of the early theater-going experience. Back then, most theater owners were building theaters as grand entertainment "palaces" meant to rival the sophistication of European opera houses, and movie snacks didn't seem to fit with that aesthetic.

But everything changed as the Great Depression put a squeeze on American wallets, forcing movie theater owners to figure out new ways to get their dwindling audiences to spend more money. Although candy and soda arrived in movie theaters soon after, sugar rationing during World War II put popcorn back at center stage. By the end of the war, popcorn and the movies were now "inextricably bound," as Smithsonian puts it, with more than half of all American popcorn being consumed in movie theaters. After all, it was certainly easier to get it at the movies than it was to pop it at home in those pre-microwave days.

By the 1970s, candy had made a full comeback in movie-theaters. But while nowadays, chocolate and candy are virtually synonymous, back in the 1970s, movie-theater candy was more about sugar than chocolate. Here's a snapshot of what you might have seen at a movie theater concession stand during the 1970s.

Good & Plenty, which was introduced in 1893 and is the oldest branded candy in the U.S., was ubiquitous at movie theater concession stands in the 1970s. The neat little capsule-shaped licorice bites, coated in a pretty pink- and white-candy shell, had long since become a movie theater classic.

What might be surprising about the popularity of Good & Plenty as a movie food is the rattle the candy makes in its box, which the manufacturer leveraged for many years with its "Choo Choo Charlie" television commercials, featuring a cartoon locomotive engineer who made is train run by shaking his box of Good and Plenty. It makes for great branding, though we wouldn't want to be the one sitting next to a child shaking this box throughout the movie screening.

Shiny and capsule-shaped like Good & Plenty, Mike and Ike was developed by a company called Just Born in the 1940s. It was meant to appeal to candy lovers who were now beginning to prefer fruit flavors to licorice. According to the company, Mike and Ike is one of the biggest non-chocolate candy flavors at the movies, and people still can't get enough of these fruity treats. 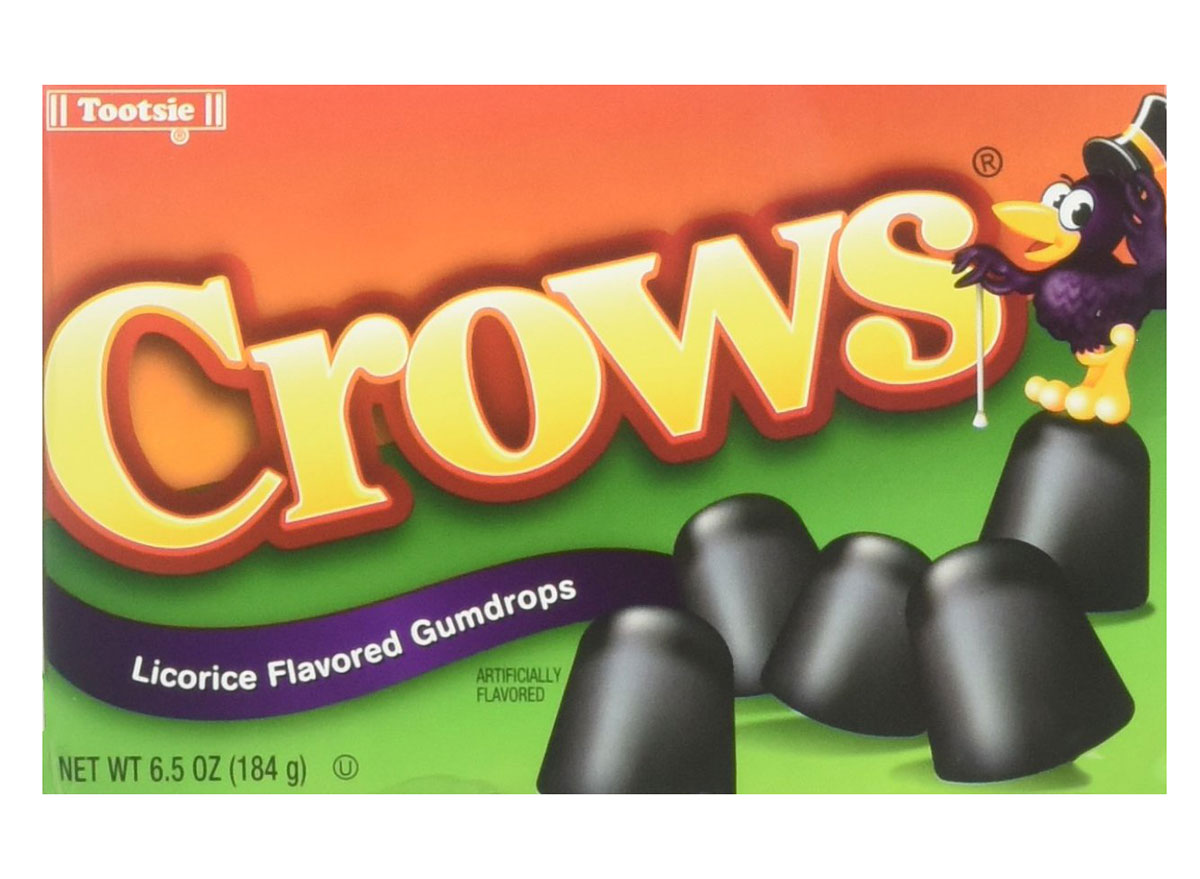 Crows, which are essentially licorice-flavored gumdrops, are definitely an acquired taste, though they were quite popular back in the day. Although they've been around since the late 1800s, when they were called "Mason Black Crows," they only became a movie theater concession staple starting in 1972. That's when Crows was bought by Tootsie Roll Industries, which brought them into theaters. 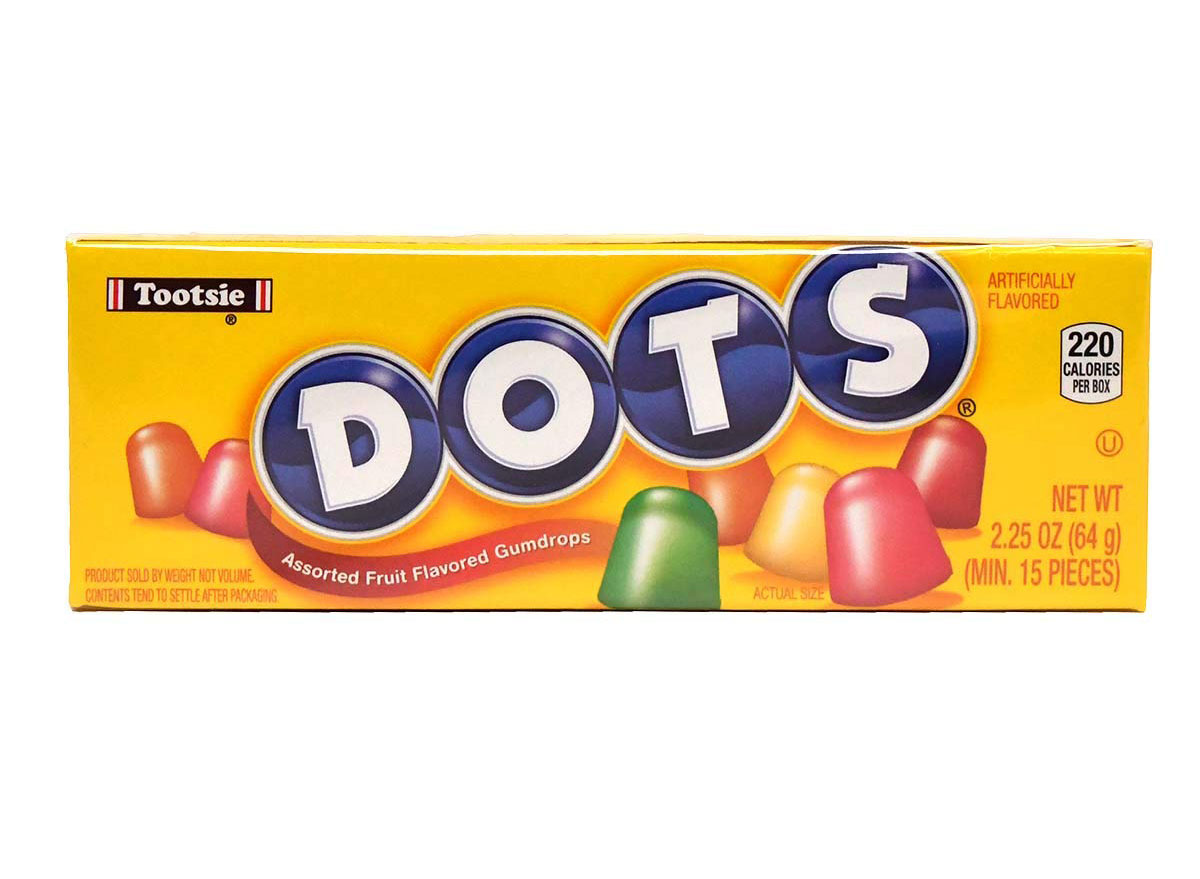 DOTS are the chewy, cone-shaped, fruit-flavored version of Crows. They were introduced in 1945 as a "fruity spinoff" of Crows, with the same flavors as today: cherry, strawberry, lemon, lime, and orange. As with Crows, DOTS entered movie theaters only after Tootsie purchased the company in 1972. But DOTS, as any moviegoer knows, are still here today.

Red Vines, those fruity, gummy red edible strands that so many people still associate with moviegoing, might seem a lot like Twizzlers, another movie theater staple. However, diehard Vines fans will say they're not the same at all. Raspberry-flavored Red Vines, owned by the American Licorice Company, began production in 1914. Twizzlers, on the other hand, are owned by Hershey's, strawberry flavored. and were not commercially available until at least 1929. But both found their way into movie theaters early in the game.

However, when Neil Armstrong supposedly requested Twizzlers on the moon in 1969, it laid the groundwork for Twizzlers to surpass Red Vines as the number one ropey red gummy candy in theaters during the 1970s. Today, Red Vines are nowhere near as ubiquitous as Twizzlers, but they still have a loyal following.

As mentioned earlier, the end of World War II put an end to wartime sugar rationing, causing American moviegoers to become happily reacquainted with sweet movie treats. But World War II and its aftermath had another significant impact on the American sweet tooth, and that was the weaving of M&Ms into the fabric of America.

Although M&M's had been introduced commercially in the U.S. in 1941, they quickly became the official candy of the U.S. military during World War II. In fact, all M&M production was diverted to GIs on active duty. When soldiers returned from the war, not only did they want more of the candy-coated milk chocolate buttons that "melt in your mouth, not in your hands," but so did everyone else. America's post-war affection for M&Ms may be attributable to the fact that the candies were seen as the food of American heroes.

M&Ms, which were initially available in cardboard tubes, first came to American theaters in rectangular boxes and were appreciated by movie theater owners and parents alike, in part because they could be eaten virtually as neatly as non-chocolate candy.

The next time you pick up a box of any of these candies, know that you're honoring a decades-old moviegoing tradition.

Lauren Cahn
Lauren Cahn is a food, health, and culture writer whose work has appeared online and in print for Reader's Digest as well as Health Digest, Huffington Post, Taste of Home, and others. Read more
Filed Under
Candy // Facts // Product Round-Ups