Chick-fil-A Is Opening New Locations in These Cities

Chick-fil-A could be coming to a city near you. The popular fast-food chain, which already operates more than 2,600 restaurants across North America, has several new openings in the works.

On the East Coast, the chicken chain will be adding to its portfolio of New York City restaurants by building its first ground-up, standalone location in the Big Apple. The 6,000-square-foot unit will be located at 1573 Flatbush Avenue in Brooklyn's Midwood neighborhood near Brooklyn College and will feature abundant indoor seating, according to The New York Post.

While a completion date hasn't been set for the restaurant, construction will begin once the three-story office building that currently occupies the space is demolished. 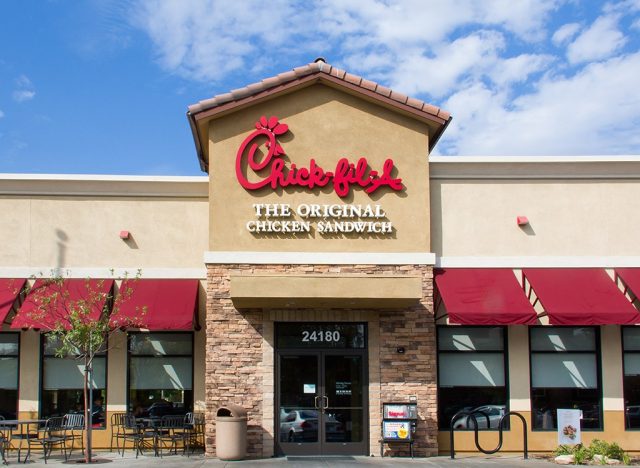 In the Midwest, Chick-fil-A is planning to open four new locations in Michigan, three of which will open this fall in the Metro Detroit area—in Southfield, Monroe, and Livonia, Mich. The restaurants will be owned by independent local operators, and the company pledged to donate $25,000 on behalf of each location to Feeding America, for a total of $75,000 in support of food banks in the Detroit area.

Northwest of Detroit, Flint Township, Mich. will also become home to a standalone Chick-fil-A restaurant on 3140 Miller Road sometime next year, according to Michigan Live.

Heading down south, the Atlanta-based chain will be serving even more Georgia residents with the opening of its restaurant in Georgia Tech's newly-renovated Student Center. The location, which made its debut today, will temporarily open for takeout and mobile ordering for lunch from 11 a.m. to 4 p.m. from Monday through Saturday. Then, starting August 15, customers will be able to place orders between 7 a.m. and 10 p.m., Monday through Saturday.

Atlanta isn't the only southern city getting another Chick-fil-A, though. The fast-food chain is planning to open its third Richmond, Va. location in Three James Center, according to documents filed with the city. While the opening date is unclear, Richmond Biz Sense reported that the restaurant will replace the former Arby's space, which has been vacant since its 2019 closure.

Brianna Ruback
Brianna is the Editorial Assistant at Eat This, Not That! She attended Ithaca College, where she graduated with a degree in Journalism and a minor in Communication Studies. Read more about Brianna
Filed Under
Chick-Fil-A // Fast Food // News // Restaurant Chains