Chances are you've seen an ad in your Instagram feed at some point of a beautiful, youthful person curling up on the couch in a deep and peaceful slumber underneath the pleasant confines of a weighted blanket. Yes, a weighted blanket, which is exactly what it sounds like: a blanket that's woven with weighted beads into its fabric that makes it heavier. While several health experts have argued that weighted blankets not only help you sleep but they also reduce your stress and anxiety (and even help you think more clearly), you'd be forgiven for dismissing these (sometimes pricey) items as superfluous—like something you'd see while thumbing through an old SkyMall catalog.

However, a study published in the Journal of Clinical Sleep Medicine laid out the strongest case yet for buying one and really giving it a try. (Seriously.) So if you're suffering from poor sleep and you're desperate to try a new and effective sleep aid, here's why this study says you'd do worse than buying a weighted blanket. So read on, and for more helpful sleep science, don't miss What Sleeping with the TV on Does to Your Body, Says Science.

Putting Weighted Blankets to the Test 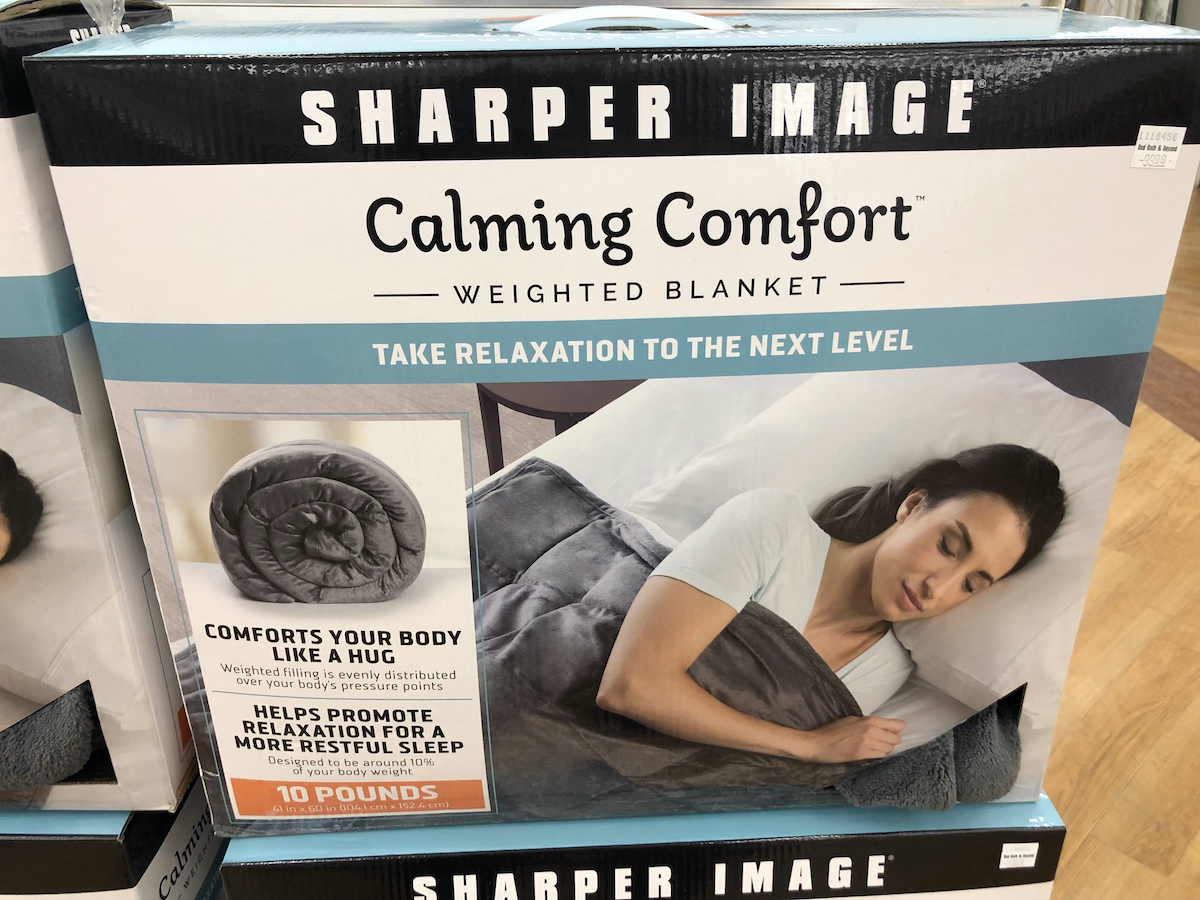 For the study, researchers assembled 120 adult volunteers who had been diagnosed with both insomnia and a psychiatric disorder, which included "major depressive disorder, bipolar disorder, attention deficit hyperactivity disorder, or generalized anxiety disorder." The participants were 68% women, 32% men, and altogether had an average age of 40.

Broken into two groups, the volunteers were given either a weighted blanket of 17.6 pounds (though ten of the participants found that to be too heavy and opted for a 13.2-pound blanket instead) or a "control blanket" of roughly 3 pounds, and both groups used them for a month. And for more great sleep advice, don't miss why It's Worse to Sleep on This Side of Your Body, Says Science.

At the end of the study, those who slept underneath the heavier blankets were nearly "26 times more likely to experience a decrease of 50% or more in their insomnia severity compared to the control group, and they were nearly 20 times more likely to achieve remission of their insomnia," reports the study's official release. At the end of a follow-up a full year later, the researchers note that "positive results were maintained." And for more great ways to sleep better starting now, see here for The One Secret Sleep Trick That Can Change Your Life.

One of the reasons experts say that weighted blankets work is because that they mimic a hug. "It is one of the most natural things to reach and hug a family member or friend when they are upset or anxious," Christine Rocchio Mueller, Occupational Therapist at Hospital for Special Surgery in New York, explained to Good Housekeeping. "While a hug might not solve all your problems, it often helps you feel better by calming your body which then allows you to think a little bit clearer."6254a4d1642c605c54bf1cab17d50f1e

The researchers of this study, meanwhile, argue that the blankets mimic the effects of a cozy massage. "A suggested explanation for the calming and sleep-promoting effect is the pressure that the chain blanket applies on different points on the body, stimulating the sensation of touch and the sense of muscles and joints, similar to acupressure and massage," one lead researcher, Dr. Mats Alder, a consultant psychiatrist at the Karolinska Institutet in Stockholm, Sweden, explained. "There is evidence suggesting that deep pressure stimulation increases parasympathetic arousal of the autonomic nervous system and at the same time reduces sympathetic arousal, which is considered to be the cause of the calming effect."

Should You Get One?

If you suffer from poor sleep, it couldn't hurt to try. After all, only a single participant in the study found the heavier blankets stressful to use. The key to choosing one, however, is to pick the right weight for you. Experts recommend that you go with a blanket that is roughly 10% of your bodyweight. (So, if you're 120 pounds, you'd need a 12 pound blanket.) And for more sleep news, see here for the One Secret Side Effect of Having Weird Dreams, Says Study.