12 Old-Fashioned Candies To Bring Back This Summer

We're officially campaigning for the return of these sweet stalwarts.

One of the biggest thrills of being a kid was checking out all the candy at the checkout lane at the grocery store, or those rare occasions when we were given an empty plastic bag to fill up with sweets at the local candy shop.  Not only did we stare at all the goodies, dreaming of sugary sweetness, but begging our parents for a treat (with mixed success) was just part of the work of being a kid.

But when we did succeed in making our case, we treated the selection process like we were choosing a name for our firstborn. So many factors to weigh—should we go for a candy that was long-lasting like lollipops, or perhaps a big bag of shredded bubble gum, or just a giant sugar bomb? It was a huge decision, and when we think back to those summer days, these are the candies we're bringing back this summer for some sweet nostalgia.

The original Nerds, launched in 1983, were basically colored globs of sugar in a divided box with two flavors, and we loved them. Since then there have been candy innovations like Nerds Rope and Nerds Clusters, but we still love the harder-to-find original. 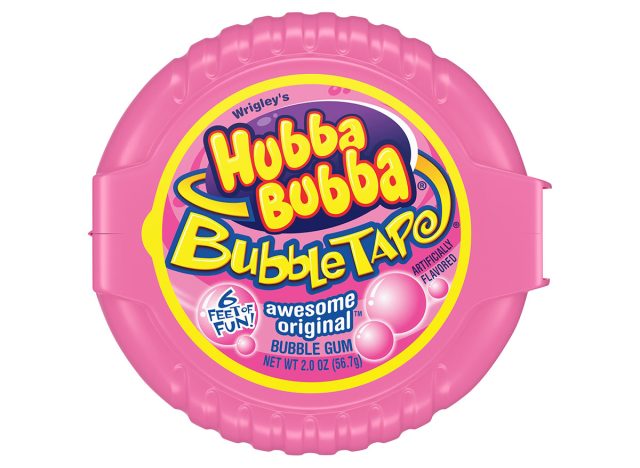 Sure we all remember Hubba Bubba, but what most kids really loved back in 1988 was the tape version. The pink canister fit right in your pocket or backpack and dispensed enough sweet chewing gum to share or keep yourself stocked for days. 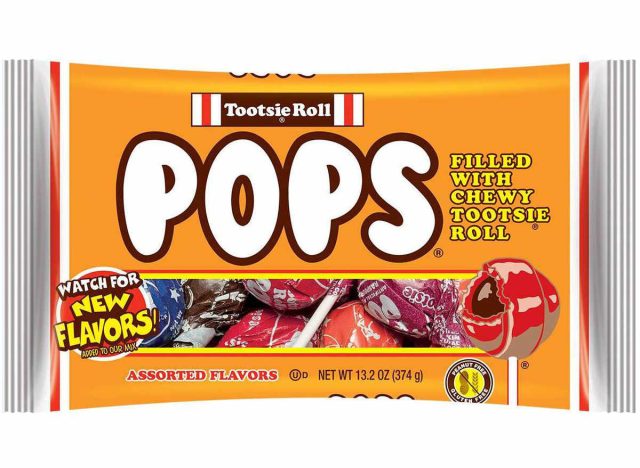 Since its introduction in the 1930s, this double-treat candy has been a childhood favorite of millions. And what's not to love about working your way through a lollipop to a chewy chocolate center? We're looking forward to revisiting the age-old question of how many licks it takes it to get to the center of a Tootsie Pop.

While taffy is believed to have been invented in the 1880s, Laffy Taffy didn't hit store shelves until the 1970s, when it was called Breich's Caramels. The company changed its name a few years later, and thus became the chewy treat we all remember.

First introduced in 1982, these candies that look like tiny fruits (specifically banana, orange, cherry, strawberry, and lime) tasted more like a hard hunk of coated sugar. Naturally, we loved them!6254a4d1642c605c54bf1cab17d50f1e 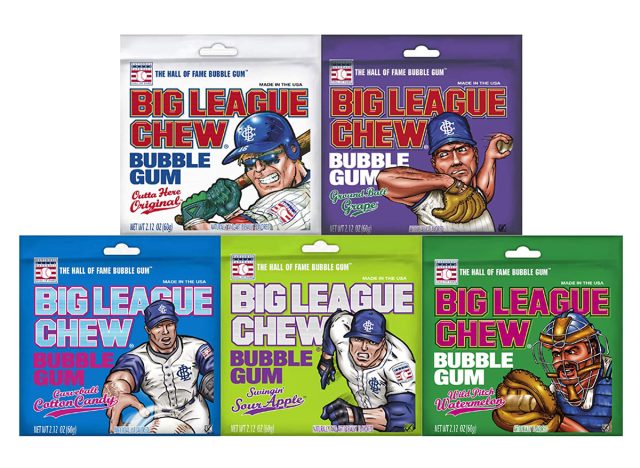 Once upon a time, most baseball players chewed tobacco on the field, and kids imitated them with this shredded gum in a bag. While most athletes are more health-conscious these days, this gum brings back memories. 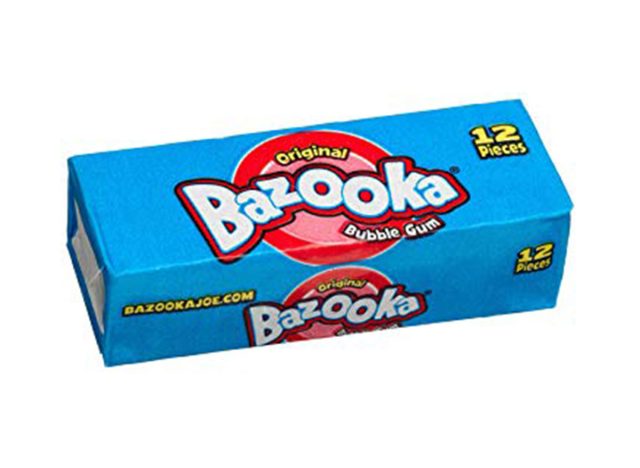 Good old Bazooka gave you a blast of sugar and something to chew on, but the funny Bazooka Joe comics were swapped out for brain teasers in 2012, so they look a little different than you might remember. 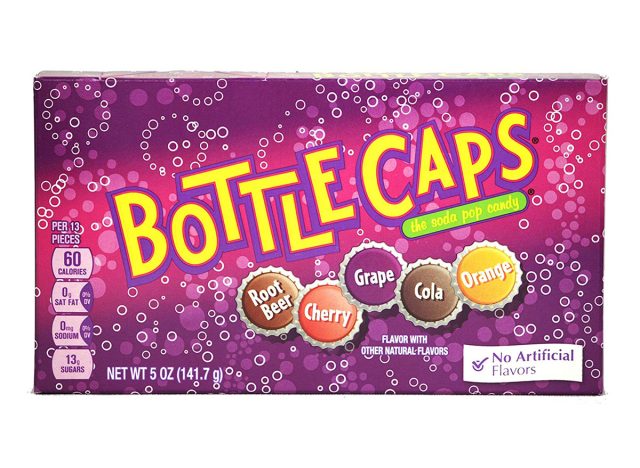 These nostalgic candies have been part of our collective childhood since 1972, and the candies—meant to mimic soda pop with root beer, cola, cherry, grape, and orange flavors—are still a favorite.

These seemed like the best of both worlds—a fancy, colorful necklace and candy?! Since the 1950s, these have been a childhood staple, and while we kind of want them to come back, somehow sucking on a sticky string all day isn't as appealing as it once seemed.

Speaking of sticky candy, another favorite in the realm of edible jewelry is the classic Ring Pop. Just slide that bright purple, red, or green ring onto your finger and enjoy the giant gem lollipop. Apparently, they were invented in the 1970s by a product engineer at Topps Company as a way to get his daughter to stop sucking her thumb. 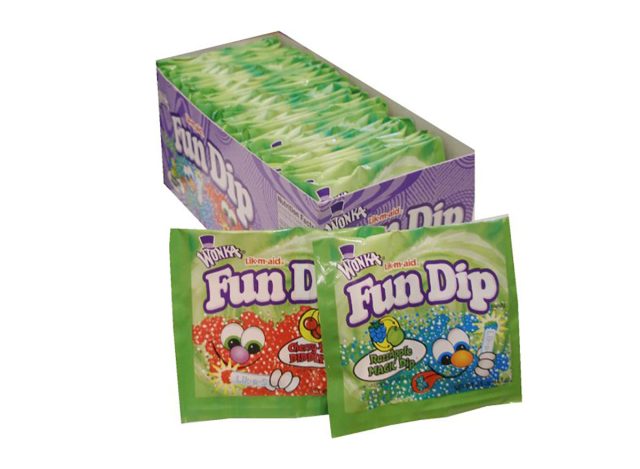 While we suppose dipping sugar sticks into colored packets of sugar qualifies as summer fun, we can't help but think Fun Dip was kind of a wild candy! Invented in 1950, Fun Dip is ripe for a comeback. Just don't spill the sugar in your mom's car! 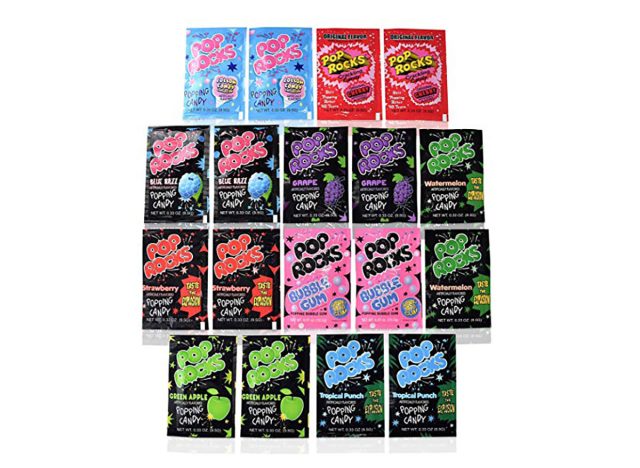 This exploding candy was accidentally invented in 1975 by William Mitchell, a food scientist at General Foods. He was trying to invent an instant soft drink by putting carbon dioxide and sugar in his mouth at the same time. The rest is sugary history!

Tanya Edwards
Tanya Edwards is a seasoned food and health journalist, who has held roles at Yahoo Health as Managing Editor and at Food Network as Programming Director. Read more about Tanya
Filed Under
Candy // Dessert // Groceries // Shopping Tips