15 Popular Indian Dishes To Order At a Restaurant

Not sure what to order at an Indian restaurant? This list of all-star dishes is a good start!

There's so much variety within Indian cuisine that it may be impossible to try all Indian dishes in your lifetime, let alone at one time. But here are some of our favorites that you're likely to find at your nearby Indian restaurant. Like most restaurant experiences, in our opinion, your best route is ordering many main dishes and sharing them around the table. Paired with a few sides, plenty of rice (which is often included), and a dessert, you're sure to leave happy.

For the best bang for your buck, seek out an Indian buffet, where you can try a bit of everything in order to find your favorite. Keep in mind that specific preparations can vastly vary across the subcontinent, so while we've given a basic outline of what to expect, you might find these dishes in many different iterations.

This is a popular street food from northern India that's a great option for a starter. "Chaat" is the overall term for savory street food often found on Indian roadside carts, and "papdi" refers to the crunchy dough bits that make up the base.

Any meal where you're able to secure a dish of fried, stuffed dough pockets is bound to be a good one. The shape and preparation varies based on their location of origin, and while some types have meat, others are suitable for vegetarians.

Picture the shape of pita, but with a fluffier texture, thanks to the addition of eggs and yogurt to the dough. There are also many varieties of naan, like rounds topped with garlic or filled with tandoori chicken.

No table is complete without multiple types of bread, as far as we're concerned. There's a wonderfully staggering number of types of Indian bread, and while this is one that's often served with breakfast, it's delicious no matter the hour.

Dosas first came from south India, and are thin pancakes of fermented rice batter that. They can be eaten on their own, served with chutney, or stuffed with spiced potatoes.

For those who gravitate to spicy Indian dishes, don't even think about forgoing an order of raita. The cooling effect is a highly welcome reprieve between bites of peppery main dishes. But no matter what you end up ordering, it's delightful in its own right when used as a dip with naan.

Lentils are tiny legumes with big importance, as they're among the staple ingredients found in Indian cuisine. Depending where you order dal, you might be served a thinner soup-like bowl of lentils, or something more akin to a stew that comes with a side of rice. Additionally, it could be made with red lentils, yellow split peas, black lentils, or more.

Masala chai (meaning "spiced tea") can be traced back thousands of years. The specific spices involved will depend on where you get it, but you can usually expect a blend of black pepper, cloves, cinnamon, cardamom, and ginger. If you're somewhere that offers a homemade in-house blend, you'll definitely want to give it a try. One key thing to note: saying "chai tea" is redundant, it translates to "tea tea."

Translation: Chicken cooked in a mild sauce of tomatoes, butter, and cream

Perhaps the most ubiquitous Indian dish out there, butter chicken originally comes from New Delhi, and was invented by restaurateurs in the 1950s to salvage leftover chicken.

Unlike butter chicken, this dish wasn't invented in India. It's a British invention and is often spicer than its similarly hued counterpart. You usually can't go wrong with chicken tikka masala, no matter where you're ordering it.6254a4d1642c605c54bf1cab17d50f1e

Paneer is a soft, unaged cheese that you'll find yourself eagerly fishing for, in order to score all the cubes before everyone else does. But the saag, which can be made with other leafy greens besides spinach, such as mustard greens, is also delicious when scooped up with naan. 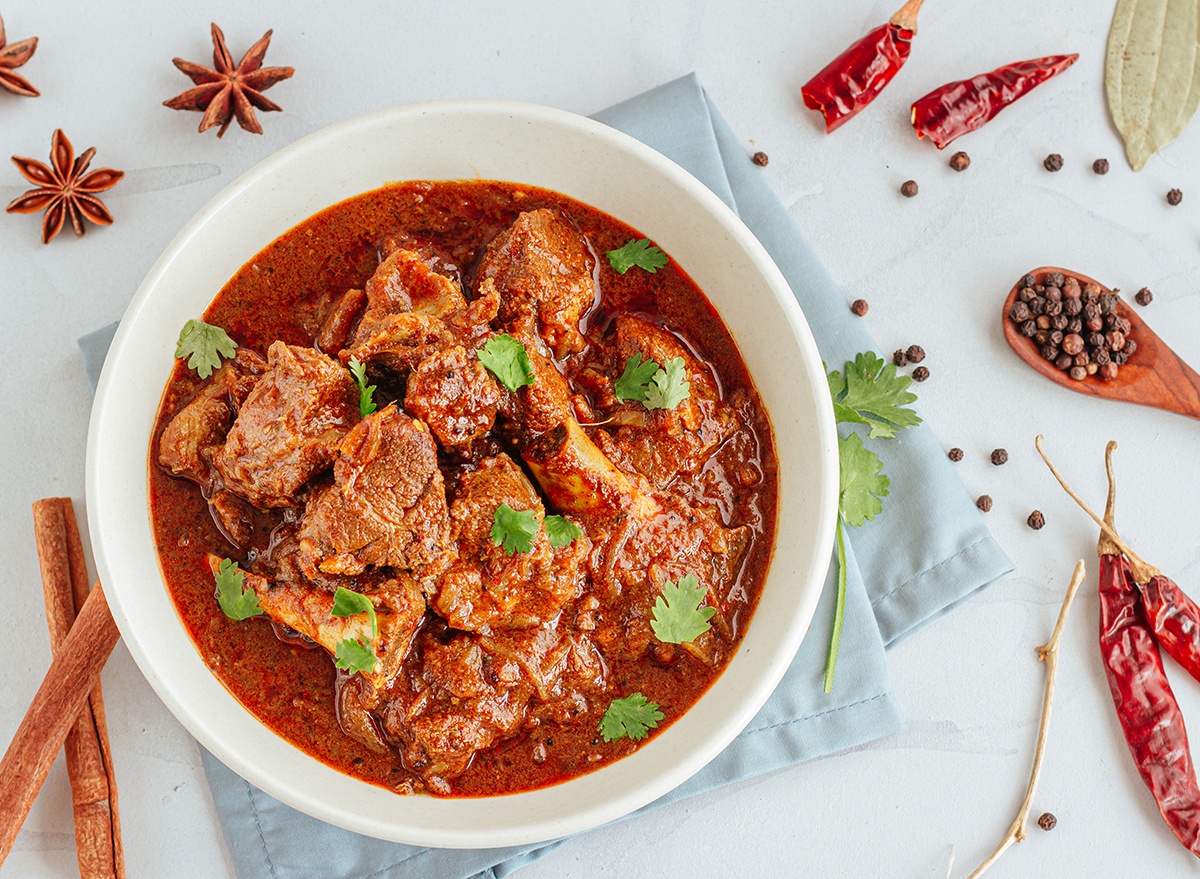 Vindaloo has a reputation for taking down those who swear to tolerate the spiciest dishes available. It originally hails from the state of Goa and is traditionally made with pork, but can be made with a variety of meats. No matter what the base is, we suggest you approach the vindaloo with a level of respect.

Translation: Braised curry often made with lamb or goat

A curry for lamb lovers, which has roots in Kashmiri and Persian cuisines. It is deeply flavored with aromatics like ginger, bay leaves, and cardamom, plus ground dried chiles. An absolutely soul-warming dish and a great curry to splurge on.

This highly comforting option gets its yellow hue from turmeric, and rounds out a meal for both vegetarians and meat-eaters alike. Some versions have tomatoes while others don't, but no matter the specific ingredients, this is a side (or a vegan main) you'll want to order.

Dessert is always a good idea, especially when it's this one. Gajar ka halwa is often consumed during Indian festivals like Diwali and Holi, but one bite of this traditional sweet dish will make any day feel like a holiday.