Tom Brady Is In Better Shape at 39 Than He Was at 25: Here's His Diet Secret

What Tom Brady has accomplished in the football world is amazing. It's also somewhat unbelievable; that is, until you factor in his and his wife's diet secret.

Tom Brady, quarterback for the New England Patriots, just pulled off the greatest win in Super Bowl history. And not only did the quarterback lead his team into setting or breaking more than 30 records in a single game, but he did it at 39 years old.

It's unprecedented. So how exactly has TB12 set himself apart from his predecessors? We're guessing it has to do with the "unique way [of doing things] that's a little outside the box that's really worked," that Brady mentioned during the Super Bowl LI MVP news conference.

Thanks to Alex Guerrero, Brady's personal body coach, the quarterback has implemented a number of lifestyle changes, including going to sleep at 9 p.m. and focusing on flexibility. But perhaps the most important (and unconventional) change is adhering to what's been called a "cutting-edge" anti-inflammatory diet. 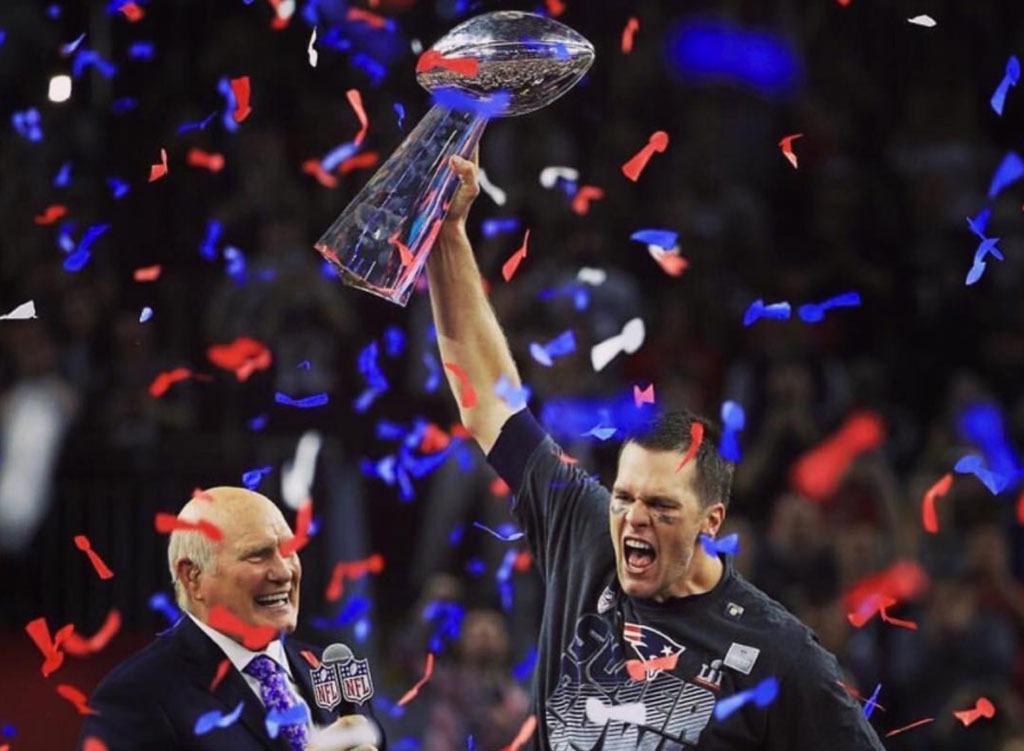 According to an interview with Allen Campbell, personal chef for Brady and his wife, supermodel Gisele Bündchen, the diet consists of plenty of all-natural and whole foods, centering on an extensive list of exclusions: processed foods, sugar, refined carbohydrates, gluten, dairy, and mushrooms. He also recommends limiting consumption of inflammatory nightshade veggies (like tomatoes, peppers, and potatoes), iodized salt, caffeine, and alcohol.

(P.S. You'd have to eat more than 24 pounds of potatoes to notice the effects of what some nutritionists believe to be the inflammatory poison found in nightshades: an alkaloid called solanine.)

It might be crazy, but apparently it works: "When I was 25, I was hurting all the time, and I couldn't imagine playing as long as I did, just because, you know, if your arm hurts every day when you throw, how can you keep playing? And now, at 39, my arm never hurts and my body never hurts," Brady told reporters.

Still need convincing? Here's a different perspective: "I think I'm living proof of what it's been," Brady confided to GQ magazine. "I was the kid that was the 199th pick that never had the body for it. People didn't think I'd play one year in the NFL, and now I'm going on my 17th year." Yeah, that's pretty impressive.

Want to try out the diet for yourself? We've rounded up a few of Brady's and Gisele's favorite anti-inflammatory foods a-la Gisele's Instagram. Eating these foods to fend off inflammation won't just help your post-workout muscles rebound more quickly, but it'll also help your body to fight off unwanted weight gain. And so will these 30 Things to Do 30 Minutes Before Bed to Lose Weight.

Gisele isn't one to pass up a raw chocolate dessert, and according to a profile of Brady published in the New York Times, his favorite "treat" is chocolate avocado ice cream. So how exactly does chocolate fit in the anti-inflammatory diet? According to Louisiana State University researchers, the tiny gut microbes in our stomach ferment chocolate into anti-inflammatory compounds that shut down genes linked to insulin resistance and inflammation.

What's better than eating chocolate cake? Pairing it with strawberries! The anti-inflammatory effects of chocolate are enhanced when you combine cocoa with the red berries. See, the addition of foods high in polyphenol antioxidants helps to speed up the probiotic fermentation process, leading to an even greater reduction in inflammation and weight. Plus, strawberries are rich in inflammation-soothing vitamin C and resveratrol, which have both been found to promote anti-inflammatory responses by fighting off free radicals. Find strawberries and more on our list of 26 Foods That Melt Love Handles.

Thanks to this crucifer's high levels of glucosinolate compounds, broccoli is a great anti-inflammatory veggie. Glucosinolates are converted into a compound known as I3C in your body, and it's I3C that research suggests is what decreases the production of pro-inflammatory mediators on a genetic level. Broccoli is also high in vitamin K, which can help regulate inflammatory responses in the body.6254a4d1642c605c54bf1cab17d50f1e

Soup won't just warm you up; it'll also help to defend your body from those inflammatory biomarkers! The nutrients in chicken or beef bones are released during the simmering process, and the beneficial nutrient we're looking at is glucosamine. According to a study published in the journal PLoS One, taking a glucosamine supplement has been shown to decrease serum CRP (an infamous inflammation biomarker) levels by 23 percent more than those who didn't take a supplement. Plus, stock is also full of anti-inflammatory amino acids (such as glycine and proline), and the ample levels of broken-down gelatin will help rebuild your gut lining to further assist your gut microbes from doing their anti-inflammatory jobs. Make your own leftover soup using one of these 20 Best-Ever Fat Burning Soups recipes!

If you're not into greens, just toss some spinach into your morning smoothie. (Even Tom and Gisele's kids drink it.) Rich in carotenoids, and vitamins C, E, and K, spinach is the ultimate tool in helping to protect the body from pro-inflammatory cytokines. Vitamin E, in particular, has been connected to reversing levels of the same inflammatory adipokine compounds released by belly fat—tumour necrosis factor-a and interleukin-6—according to a study in the Canadian Journal of Surgery.

An apple a day will keep inflammation at bay! But only if you leave on the peel: Apple skins provide an average of 10 mg of quercetin—an endurance-boosting, free-radical-scavenging, anti-inflammatory antioxidant that suppresses functioning of inflammatory pathways, according to a study published in the journal Inflammation & Allergy Drug Targets. Apples are also a great prebiotic: the food that is converted into anti-inflammatory compounds by your gut bugs.

Sure, eating beets when you're wearing white can be as nerve-wracking as walking a tightrope across Niagara Falls, but the reason this root veggie can cause nasty stains is also the reason it's anti-inflammatory. The color comes from betalain pigments, which display potent antioxidant, anti-inflammatory, and chemopreventive activity. Specifically, eating beets is associated with lower levels of inflammatory markers, including CRP as well as two inflammatory biomarkers released by belly fat—interleukin-6 (IL-6) and tumor necrosis factor (TNF)—according to a review in the journal Nutrients.

Throw a couple slices of avocado in your grain bowl (or do like Tom Brady and blend it into an ice cream), and you'll be on your way to lower inflammation. According to a 2013 Food & Function study, when people consumed a slice of avocado with a hamburger, the researchers measured lower levels of inflammatory markers NF-kB and IL-6 in the avocado eaters than participants who ate the hamburger alone. Try your hand at it with these avocado recipes for weight loss.

Brady and Bündchen never eat refined grains or white flour. That's because refining grains significantly decreases grains' anti-inflammatory properties by lowering levels of fiber and B vitamins. Fiber gets converted into butyrate in your belly, a fatty acid that turns off genes related to inflammation and insulin resistance. And B vitamins attack the inflammatory hormone homocysteine in the body.

According to an interview with VOGUE Paris, Gisele loves to "face the day head-on with a glass of warm water and pressed lemon to kick-start the digestive system" bright and early at 6 a.m.! Like many other citrus fruits, lemon is rich in vitamin C—an antioxidant vitamin that also plays a vital role in collagen synthesis, a protein that helps to repair a leaky gut that has been damaged by a high-sugar, high-fat diet. Lemon is also a great source of inflammation-fighting phytonutrients: compounds that help fend off inflammation and play a role in one of the 42 Ways to Lose 5 Inches of Belly Fat.