5 New Foods With More Protein Than an Egg

The metric system, universal healthcare, soccer, the music of David Hasselhoff—some things have a harder time catching on in the United States. But that hasn't dissuaded the United Nations from urging us to develop a taste for 1,900 species of edible insects that are summarily enjoyed elsewhere. (In fact, regular consumption of raw and cooked insects is the norm for two billion people with whom we share this little planet.)

In 2013, the organization published a report that detailed why bugs could be a solution for food shortages in the future. Here, Eat This, Not That runs down five of the most nutritious bugs out there (according to research published by the UN and the USDA) and what they can do for your body. Don't look away! And if you're looking to lose weight while eating the foods you love, don't miss these 50 Ways to Lose 10 Pounds—Fast!

Eat Mealworms to Fill You Up and Rev Your Metabolism 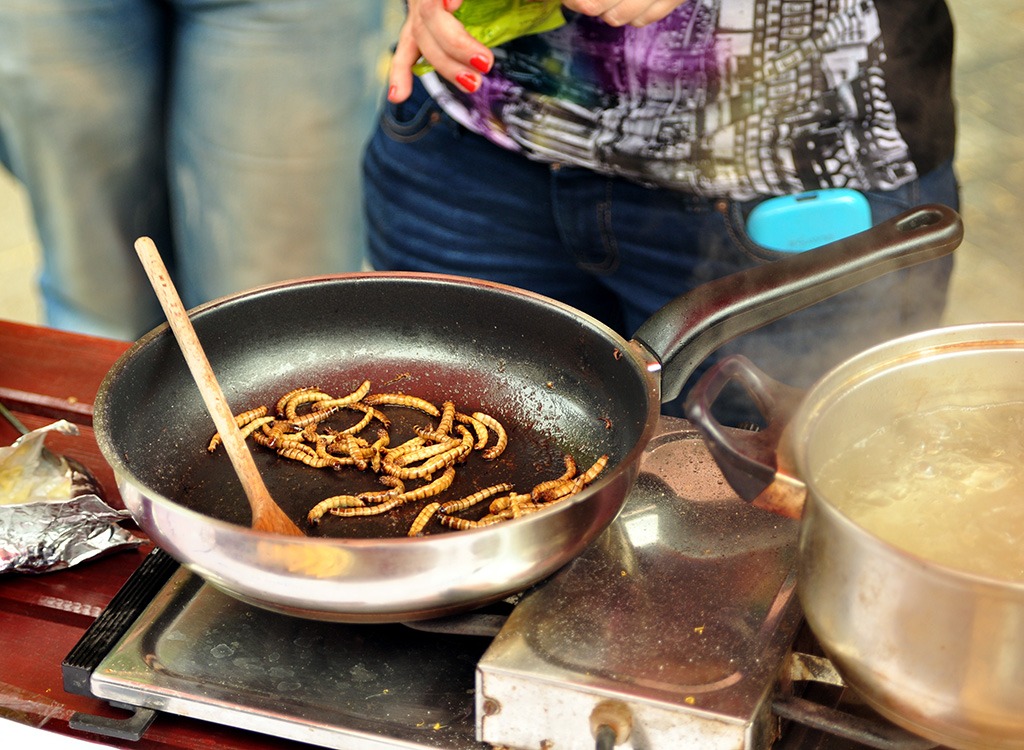 Mealworms, a.k.a. Tenebrio molitor, are the larval form of the mealworm beetle, and they're about an inch long — conveniently snack-sized! Although they've traditionally been seen as a grain-eating pest by some cultures, others have turned lemons into highly nutritious lemonade, so to speak, by seasoning and roasting them. Of all the major edible insects, mealworms contain the most protein: A 100-gram serving packs 24 grams. To put that in perspective, 100 grams of 90% lean ground beef has only slightly more, with 26 grams. Mealworms actually beat wild Atlantic salmon for protein power — an equivalent serving contains only 20 grams! 6254a4d1642c605c54bf1cab17d50f1e

By eating a diet rich in mealworms and derived products like mealworm protein powder, you'll speed up your metabolism in two ways. Protein stimulates the thermic effect of food, which means that the body burns more energy processing it than it does carbohydrates or fats. You'll also feel more full after all that Tenebrio molitor goodness. In 2012 researchers at the University of Lyon in France examined why protein makes people more full. They discovered that digested dietary proteins stimulate something called mu-opioid receptors, which curb appetite. There are easier ways: Check out this list of The 29 Best-Ever Proteins for Weight Loss!

Mealworms are good sautéed; they tend to pick up the flavors of the foods they're cooked with. You may want to use them in a stir-fry, or cook them up on their own with some basic seasonings. According to the cookbook Entertaining With Insects by Ronald L. Taylor and Barbara J. Carter, this is a good recipe for insects of all types:

Place ingredients in a medium-sized saucepan. Bring to a boil and allow to simmer for 30 minutes or until tender. 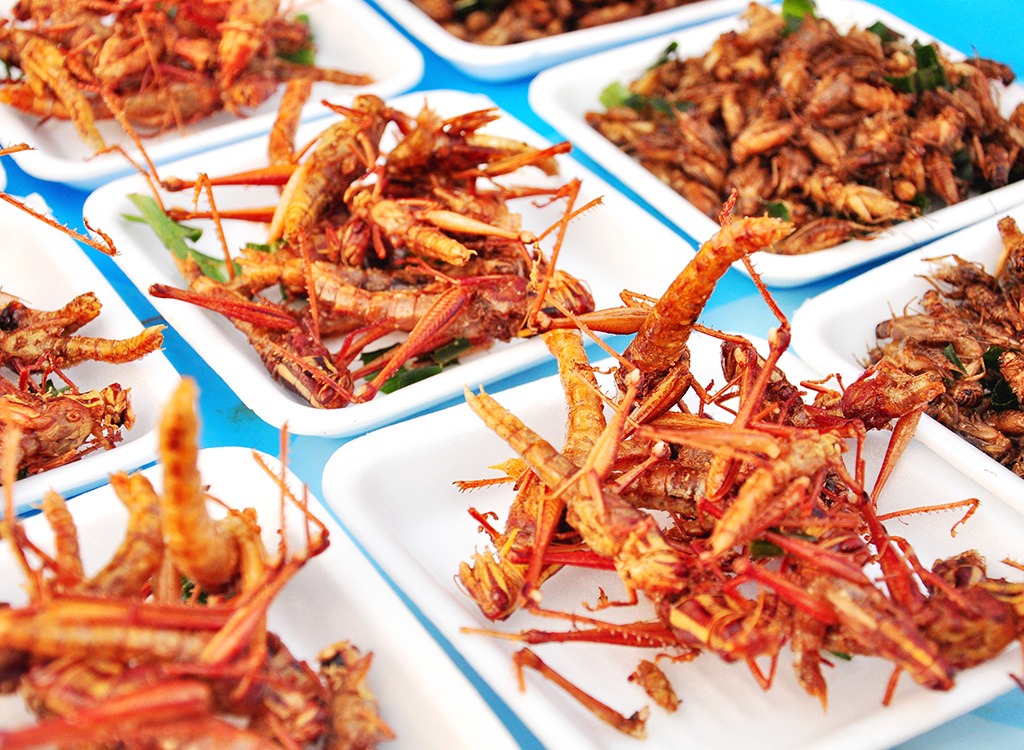 Jiminy's Crickets — should such a brand ever exist — will be able to boast that their product contains about as much protein as pork tenderloin (20.5 g per 100 g). They'll also boast that it contains high amounts of other nutrients like potassium. A 100 g bag of dry roasted crickets will give you 347 mg of potassium. That's only 11 mg less than you'd find in 100 g of banana, which has only 1.3 g of protein.

Eating all those potassium-rich crickets may help you fend off a range of cardio problems — one of the things that potassium does is lower blood pressure. One study of people with high blood pressure found that consuming the mineral lowered systolic blood pressure — that's the top number — by about 8 points! Potassium is also great for reducing bloating, which is caused by the sodium in the salty-tasting foods that we love. Insects are very low in sodium. Want a flatter belly? Order up some crickets. (You know what's worse for you thank bugs? These 38 Top Diet Sodas—Ranked!.)

The website insectsarefood.com suggests salting and dry-roasting crickets in the oven as a snack, to sautée them up with spinach for a nutritious side, or use them as a meat substitute in entreés like Cricket Fried Rice or Cricket Pad Thai. 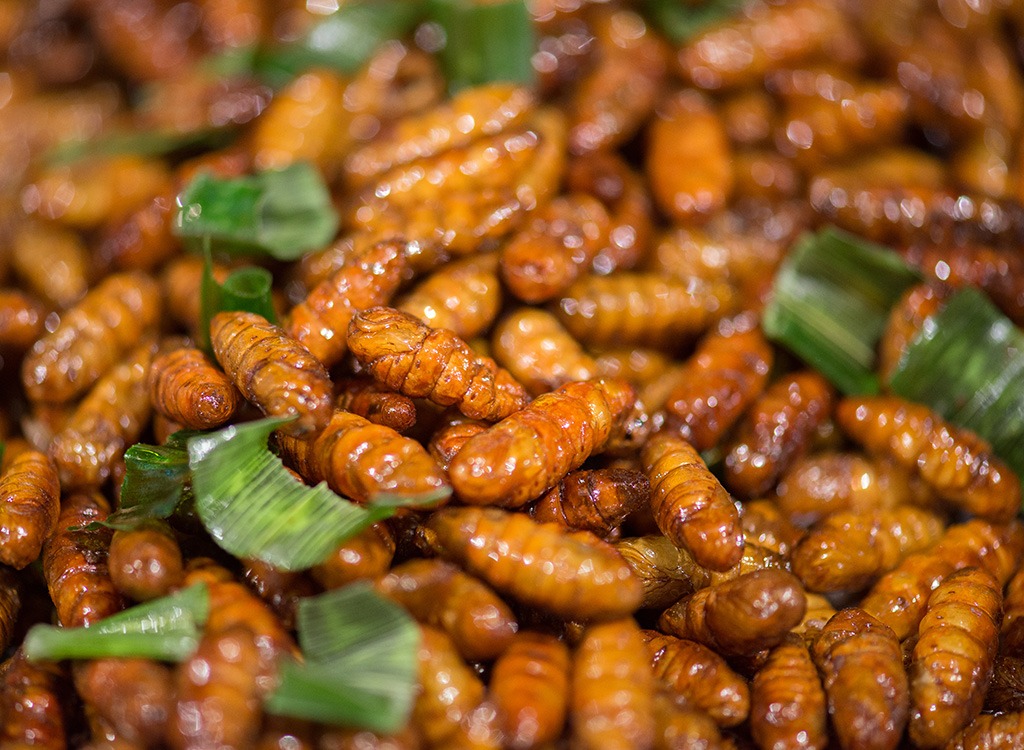 According to the USDA, adults should have 1,000 mg of calcium per day. That can be accomplished by eating one heaping handful of soldier fly larvae. A 100 g serving has 934 mg of the bone-strengthening stuff! But that's not all: Larvae boast more zinc and iron than any other insect you'd care to mention — and more than salmon, chicken or lean beef too. In a small bowlful of larvae, you get one-quarter of your daily iron needs and your full RDA of zinc! (MMM, soldier flies. Maybe instead, try these 50 Snacks With 50 Calories or Less.

Roasted, black fly larvae taste like a savory unsalted cracker and make an excellent snack. An Austrian designer who created breeding equipment for larvae — sort of a giant ant farm — advocates larvae and risotto; she says the flies add a meaty, nutty flavor.

Eat Houseflies to Ward off Illness and Feel Energized 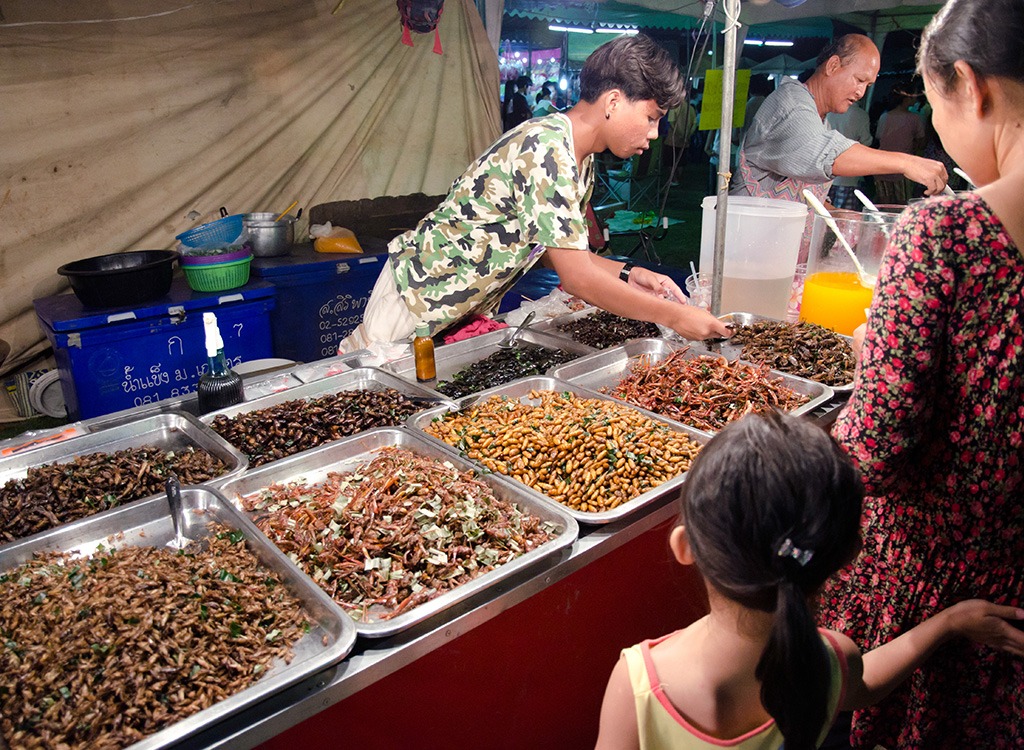 Next time you end a housefly's life with a deft stroke of your swatter, think about just how nutritious these buzzing annoyances really are. Protein? There's almost 20 grams of it in a 100- gram serving (about one cup). Iron? Gram for gram, it has six times that of lean ground beef. Flies' levels of zinc, niacin and magnesium are all off the charts, blowing away all the other insects studied — plus the salmon, chicken and beef that researchers compared it to! Zinc strengthens the immune system and helps the body make proteins and DNA. Niacin, a.k.a. vitamin B-3, helps the body convert carbohydrates into glucose, which the body uses to produce energy. Magnesium has been shown to ward off depression, panic attacks and anxiety.

"Houseflies themselves are quite edible, though not if they've been feasting on rotting garbage," writes Daniella Martin in Edible: An Adventure Into the World of Eating Insects. She points out that housefly pupae taste like blood sausage and are particularly high in iron. Adult houseflies can be roasted like crickets; pupae, like mealworms.

Eat Cockroach Nymph for Energy and to Improve Hair, Skin and Nails

When I say cockroach, it's likely that you immediately lose your appetite. But if you can get over your understandable revulsion and scarf a few of their young'uns down, you'll do your body a huge favor. A 100-gram serving of cockroaches has 24 micrograms of vitamin B12, almost 10 times the RDA. B12 keeps the body's nerve and blood cells healthy and also helps make DNA, the genetic material in all cells. If you don't get enough of this stuff, illnesses such as anemia, heart disease and nerve-system damage are clear and present dangers. The vitamin is also essential for healthy skin, hair, and nails, as it aids in cell reproduction and constant renewal of the skin. Not buying it? Blast fat quickly instead with these 55 Best-Ever Ways to Boost Your Metabolism.

Cockroaches are incredibly versatile in the kitchen. The internet is swarming (heh) with recipes for cockroach stir-frys and curries, and even cookies and candy. They can be toasted, fried, sauteed or boiled. David George Gordon's Eat-a-Bug Cookbook suggests simmering them with butter, farina, pepper and salt and spreading them on bread. In Germany, chocolate-covered cockroaches are commonly found in spring, when the bugs typically descend on the city.

Where to Buy Edible Bugs

Entomarket offers a huge variety of insects in a number of preparations: From organic raw crickets to insect powder, to Spicy Superworms and Almond Cricket Granola.

Amazon.com offers cricket flour and roasted insects in flavors such as Honey Mustard, BBQ and Salt and Pepper.
And stores like Petco and Grubco offer a wide range of crickets, worms and larvae.