They have the meats. And a history of bad ads.

Arby's has long been known for having some odd commercials. They are not afraid of nonsense, they are big on what might be called gratuitous close-ups of meat, and they often seem self-aware in their advertising, playing things seriously for laughs. And that's all fine—we're all for ironic and interesting ads.

What Arby's also does from time to time is cross lines in their advertising. Over the years, some of their spots have been too sexual, too sexist, too offensive to people of varying ethnicities or fitness levels, and in some cases, just too downright annoying. As you'd properly expect, we'll cover all of those types of Arby's ads here today. Here are the worst Arby's commercials that the fast-food chain would rather you forget.

This recent 15-second Arby's commercial manages to be infuriating multiple times over despite its brief duration. It features an obnoxiously loud buzzer sounding multiple times, interrupting the flustered narrator who is trying to pitch a Rueben sandwich. The ad has been pilloried by multiple people on Reddit and elsewhere. One Reddit user even commented that they wouldn't eat at the chain because of the spots, "They're on my 'I won't buy anything from them because their commercials are so bad.'" Now that's bad.

This ad would never have been approved in 2022 (we hope), but not that long ago, in 2006, it was all over TV. The commercial shows several construction workers ogling attractive women; they don't call out to them, but it's objectifying nonetheless. Then the men "catcall" another man who is carrying food from Arby's. It's an attempt at humor at the expense of women who have long had to suffer from such unwanted attention.

In 2006, Arby's ran a commercial purporting to show a slimmed-down Hulk Hogan who has decided he no longer needs to be pumped up after eating an Arby's chicken sandwich that was not "all pumped up with phosphates and fillers." The ad goes on to extoll Arby's chicken for now being 100% all-natural, which had countless customers asking: "What was it before?"

RELATED: 7 Controversial Ads Jack in the Box Doesn't Want You to Remember

Most people know actor Jonathan Sale from his role on the show "Law & Order." Some people know him from this cringe-worthy Arby's ad from 2009, though. It's marketing the Arby's Portobello Mushroom and Swiss roast beef sandwich, and in the ad, Sale appears to enjoy the sandwich a little too much. It's hard to watch, especially if you respected him as Detective Ron Holden.

In the early 2010s, Arby's ran a series of commercials with a new slogan: "It's good mood food!" The slogan was "sung" by a man named Parry Gripp. The ads were not so much controversial as they were almost universally panned by viewers. According to QSR Web, the ads with the original jingle were named at the time as one of the worst ads in the country by Consumerist.

In one of their more audacious marketing stunts, Arby's ran a 13-hour commercial on a TV station in Duluth, Minnesota. The entire "ad" showed a slab of brisket cooking in a smoker. It was a rather ridiculous use of air time, and is now a ridiculous use of storage space and bandwidth given that the whole 13-hour "commercial" is now posted on YouTube. 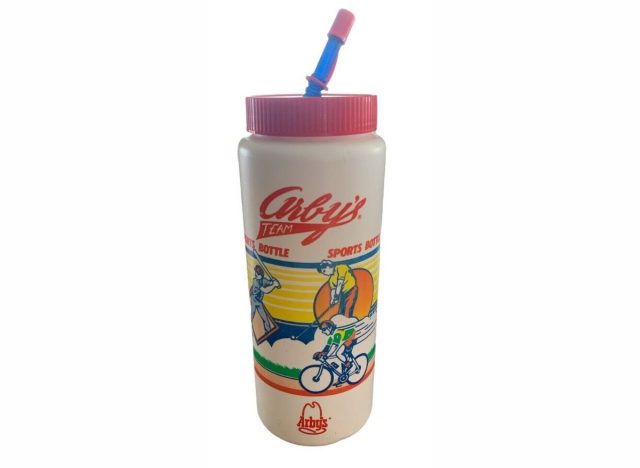 This brief commercial from the late 1980s manages to oddly insult its own prospective customer, and it also foreshadows the obesity epidemic that was on the make. It advertises the new 32-ounce sports bottle from Arby's and claims the chain made it for "active guys like you" while showing a man lazily reclined on an easy chair. In the end, we see that the "sports bottle" comes filled with Pepsi. Maybe the ad is little remembered now, but it's perfectly derisive and insulting nonetheless.