15 Worst Low-Fat Foods at the Supermarket

Just because it's low-fat doesn't mean it's good for you or can help you lose 10 pounds—especially when it come to these grocery items.

Gram for gram, fat has more calories than any other nutrient. Carbs and protein carry 4 calories per gram while fat packs a whopping 9 calories per gram—more than twice as much. Which is why, in the 1980's, health experts told the public to cut back on the stuff; they figured it would help everyone consume fewer calories. What they didn't see coming, however, was how the food industry would respond to the low-fat diet craze. (They also didn't seem to realize just how filling and healthy certain fats can be!) To hold onto their customers, companies like SnackWell and Nabisco started churning out low-fat versions of their most popular snacks, many of which had just about the same number of calories, far more chemicals, and in almost every case, more sugar than their conventional counterparts. Why? To make up for the taste, of course! To make matters worse, research shows that a "low-fat" nutrition label causes consumers—especially those who are overweight—to overeat. And the bad news doesn't end there. Low-fat diets may not even aid weight loss. In one 18-month Harvard Medical School study, those following a low-fat diet actually gained weight, while those following a moderate-fat diet lost close to 10 pounds!

If those stats don't make you reconsider adding some more fat back into your diet, these bad news low-fat products sure will! Filled with creepy chemicals, excess sugar, refined carbohydrates, and loads of calories, these are all grocery store products that should never pass your lips. After you've vowed to ban them from your cart for good, click on over to our special report The 20 Best Full-Fat Foods For Weight Loss to learn how adding more of the rich, creamy stuff to your diet can help to whittle your middle. 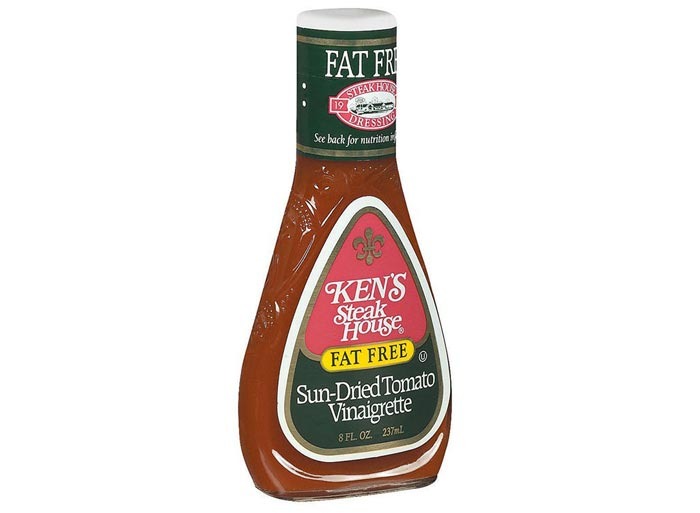 A small percentage of people eat salads because they actually enjoy how they taste. The bulk of the public, however, nibbles on beds of greens in an effort to dial back on calories while consuming vitamins and nutrients. What many people don't realize, however, is that unless they pair their greens with a source of fat, they don't won't be able to absorb all the fat soluble vitamins living inside their kale, carrots, and cucumbers. That said, generally speaking, fat-free dressings are a bit of an oxymoron—and some, like Ken's sundried tomato concoction, add insult to injury. A mere two tablespoon serving has 12 grams of sugar (what you'd find in three sugar-raised donuts), the bulk of which comes from high fructose corn syrup, which has been shown to increase appetite and lead to health problems such as obesity and diabetes, according to Lisa Moskovitz, R.D. Yikes! No wonder this dressing made the list of these 16 Salad Dressings Worse Than Chocolate Syrup 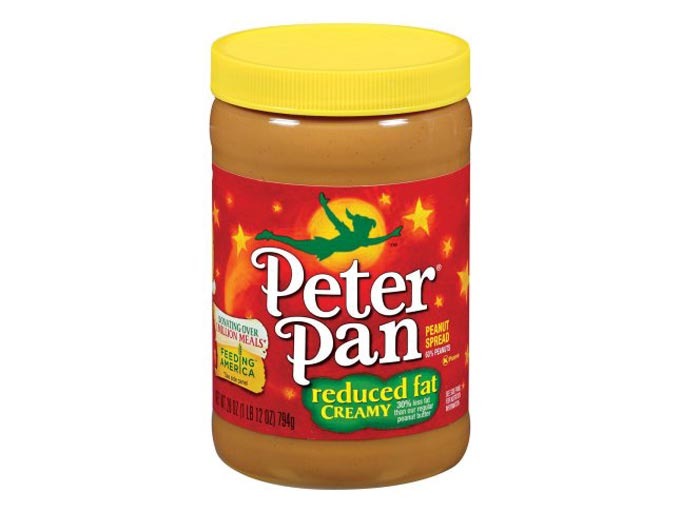 Dipping your spoon into Peter Pan's low-fat spread will only save you 3 grams of fat and a half-gram of saturated fat. While saving something is better than nothing at all, it comes at a steep cost. While a wholesome nut butter should contain nothing more than nuts and maybe some salt, this Frankenfood contains everything from corn syrup solids to heart-harming hydrogenated oils, to make up for the naturally occurring healthy fats that have been removed. The low-fat spread also contains more sugar—a nutrient everyone should be trying to dial back on. Consider it a no-go and stick to the natural stuff. 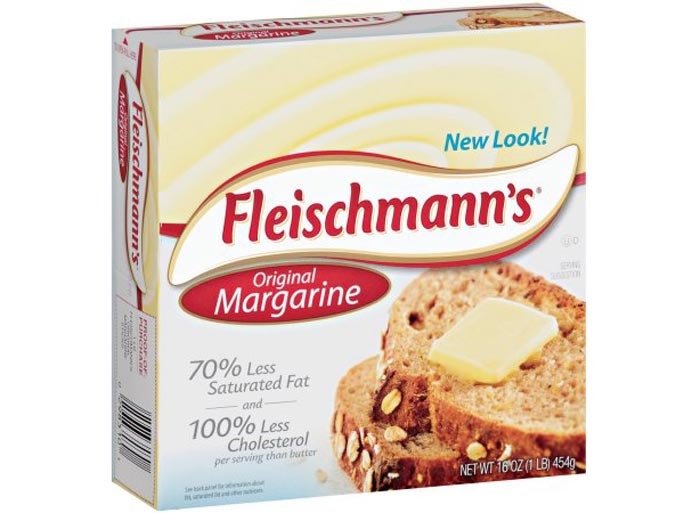 You know that light yellow color that makes margarine look almost indistinguishable from butter when laid side by side? Well, it's far from natural. In fact, without all the additives, margarine is actually an appetite-crushing shade of grey—yuck! As if that weren't bad enough, Fleischmann's version relies on soybean oil (a fat that University of California researchers have connected to weight gain) and artery clogging partially hydrogenated oils, to make up the bulk of their sticks. People have been cooking without margarine for centuries, and we suggest you continue to follow in their footsteps. Grass-fed butter is actually super healthy, and a potent source of fatty acids that can support weight loss. 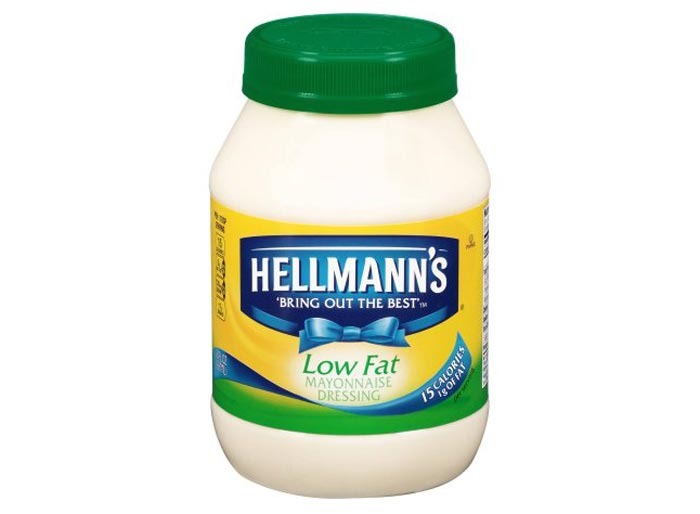 Low-fat mayo not only tastes a bit unappetizing, it's also filled with unhealthy ingredients like added sugars, vegetable oils and artificial preservatives like EDTA and sodium benzoate, explains Stephanie Middleberg, RD. "These ingredients have little nutritional value and decrease the body's ability to absorb fat-soluble vitamins. Regularly eating things like low-fat mayo can lead to inflammation, GI issues, heart disease and increased cravings that lead to weight gain." Stick with regular mayo and spread it on your sandwich sparingly. Or better yet, sub in some flavorful hummus, which is stocked with healthy fats, fiber, and weight-loss fueling protein. 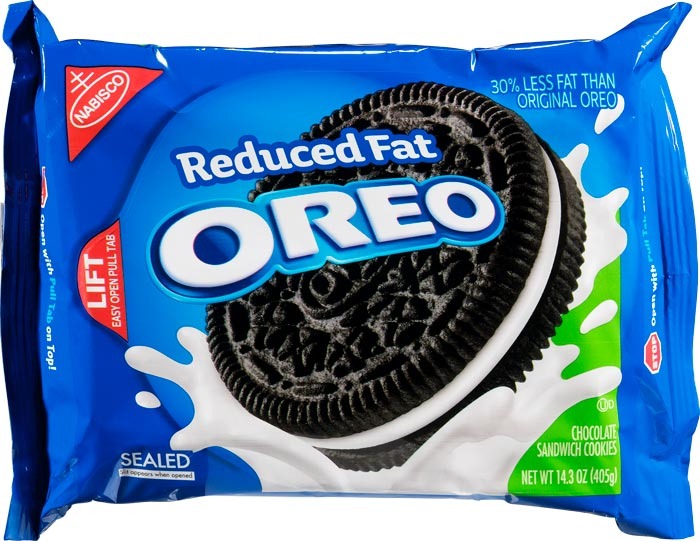 If you're going to have a cookie, have a cookie; one that's sugary, rich, and full of flavor. That way your craving for something indulgent is sure to be satiated. That's something that likely won't occur if you nibble on a "diet" cookie like Reduced Fat Oreos. Three of them have 150 calories, 4.5 grams of fat, and 2 grams of saturated fat. Plain ol' Oreos, however, have just 10 more calories and twice as much fat, which is this case, we think is a good thing, since it's that fat that satisfies your craving for dessert. Without it, you'll likely need to stick your hand back into the cookie jar again, and again, and again, which will equate to mega calorie. The better move here would be to buy a package of Oreo Thins. Just three of them have 105 calories, 4.5 grams of fat, 1.5 grams saturated fat, and 9 grams of sugar, making them the superior pick. To see how all of your favorite cookies stack up to one another, click on over to our report, The 36 Most Popular Cookies in America — Ranked!. 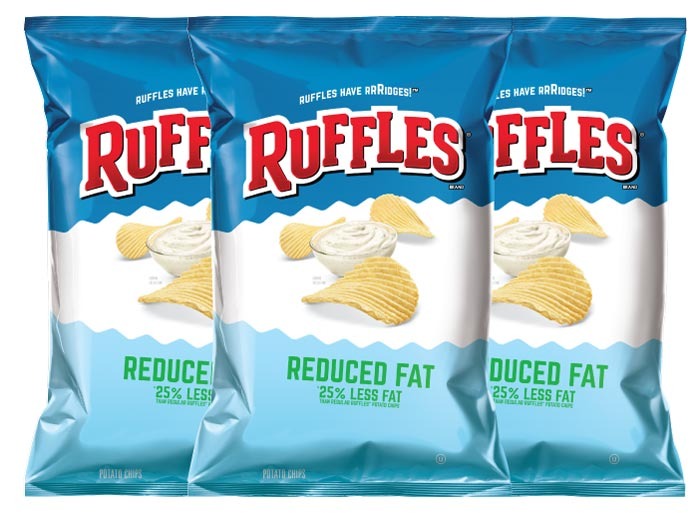 Reduced-fat chips might trump their ultra-oily siblings, but they still fall short when compared to the low-fat content of a well-made baked chip. We're fans of Lay's Oven-Baked Original Potato Crisps which have just 120 calories, 2 grams of fat, and 135 milligrams of sodium—pretty impressive for a salty snack. Consider them the Eat This counterpart to this greasy Not That! crisp. And if you really want to boost the health factor of your snack time, quell your craving for something savory with dried and roasted chickpeas or some lightly salted nuts. 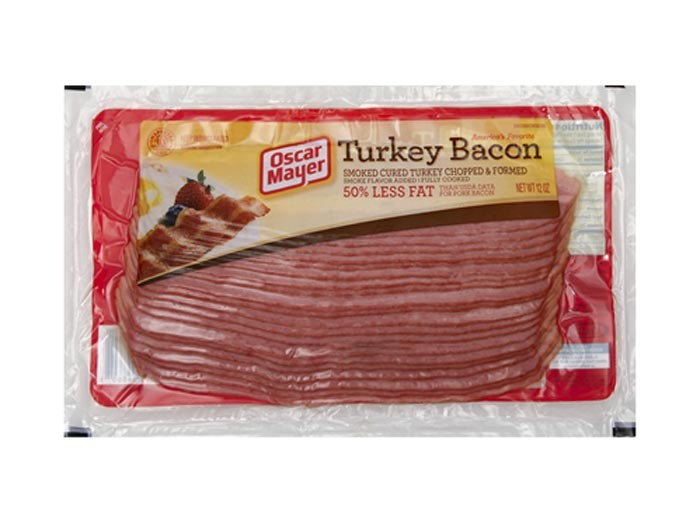 Many people assume turkey bacon is healthier than it's pig-based counterpart but that's rarely the case—especially when it comes to Oscar Mayer's rendition. Each slice has 140 milligrams of salt (and no one stops at just one!) and is laced with less-than-appetizing sounding additives like smoke flavor, potassium phosphates, and potassium chloride, which up until the 1960s was used in fire extinguishers as a fire retardant. Freaked out a bit? Us, too. Learn more about the chemicals lurking in your food in our special report, 23 Worst Food Additives in America. 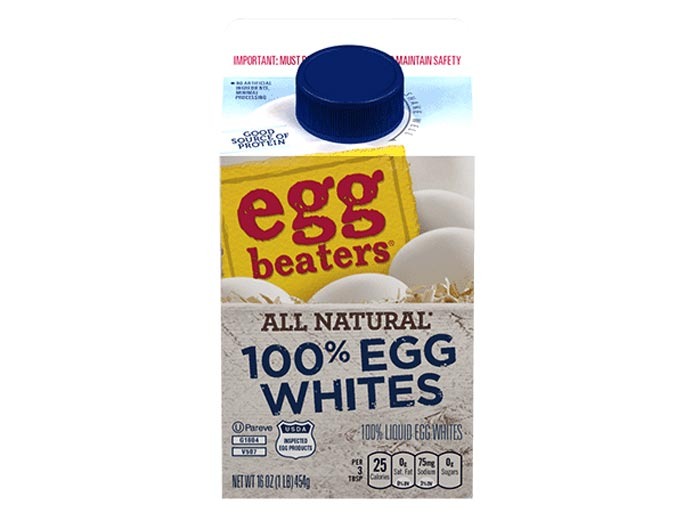 The whites from hen-laid eggs are good sources of protein and vitamin A. The eggs used to make Egg Beaters are also a solid source of muscle-building protein, but somewhere between processing and packaging, they lose their vitamin A. It gets worse. Also lurking in the container is xanthan gum, a thickener and stabilizing agent. Yuck! The only thing we want to find in our eggs is some sautéed veggies and spices. Skip the Beaters and stick with whole, natural eggs—yolk and all. It's filled with a fat-fighting nutrient called choline. 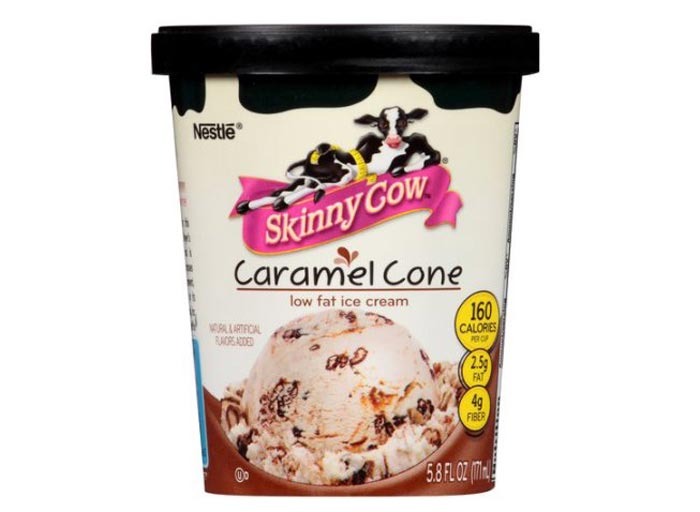 When the fat is cut out of ice cream, it's often replaced with a slew of hard-to-pronounce ingredients. Skinny Cow's caramel flavored treat contains carrageenan (a controversial thickener, caramel color (a potential carcinogen), propylene glycol (a chemical used to make antifreeze), and sorbitol, a sugar alcohol with laxative side effects. Word on the street is that this product is getting the boot in the near future. Good riddance! 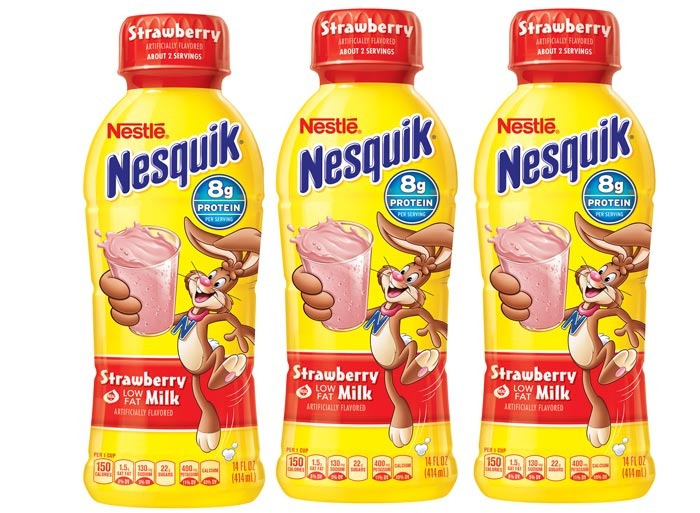 It may be made with 1% milk, but that doesn't mean this flavored drink is a healthy one. For starters, the milk inside this cartoon decorated bottle is the conventional variety, which doesn't contain anywhere as many omega-3 fatty or CLA (conjugated linoleic acid) as it's grass-fed counterparts. What's more, a single bottle of the stuff contains 44 grams of sugar in a 14-ounce bottle (which is more than you'd find in 17 Hershey Kisses) and Red #3. After the dye was inextricably linked to thyroid tumors in rat studies, the FDA managed to have the liquid form of the dye removed from external drugs and cosmetics, but somehow it still remains in our food supply. 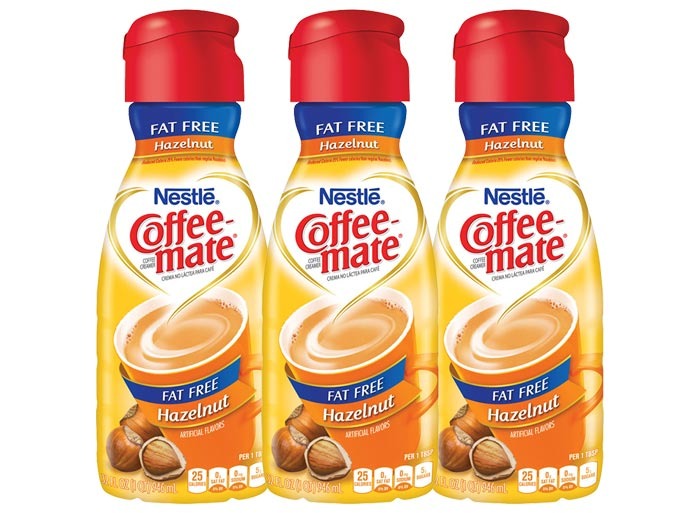 Nearly all conventional creamers (one of these 50 Unhealthiest Foods On the Planet) are bad for your health, and the fat-free ones are no exception. Not only is this gross java addition completely devoid of dairy, it contains trans fats that have been linked to coronary disease and metabolic syndrome—despite the fact that it's "fat-free." Hum…! To make matters worse, a serving is considered one tablespoon. An average unmeasured pour equals four times that amount—which means you'll likely be consuming a few grams of fat, close to 100 calories, and 20 or so grams of sugar. 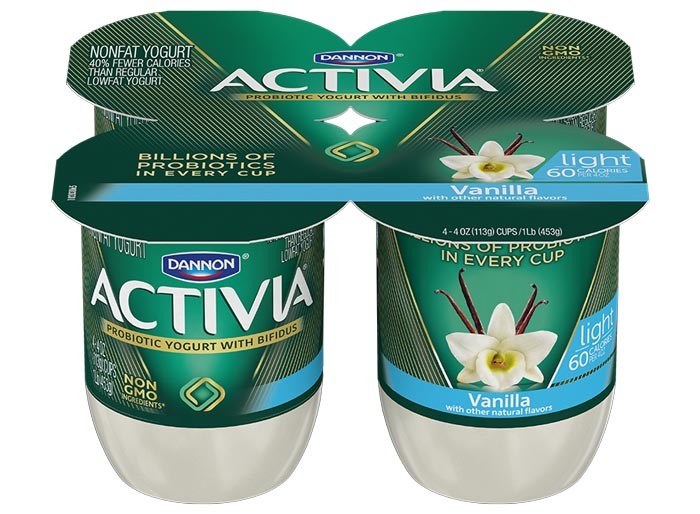 This Activia container might be lower in calories and fat, but don't be fooled—it doesn't deserve a place in your fridge. Ironically, the Greek yogurt that touts being supportive of digestion and a healthy gut chose to add sucralose and acesulfame potassium to their recipe. Both of these artificial sweeteners have been shown to alter our gut microbiome, which can result in worsened digestive issues and even weight gain. So what should you reach for instead? A plain, full-fat container. (We suggest flavoring it with a drizzle of honey and some fresh fruit.) According to a study of 26,930 people, consuming high-fat dairy products can lower your risk of diabetes. In the study, participants who ate a lot of low-fat dairy products had the highest incidence of the condition. The researchers speculated that while calcium, protein, vitamin D and other nutrients in yogurt are indeed good for us, we need the fat that goes along with them in order to get their protective effects. 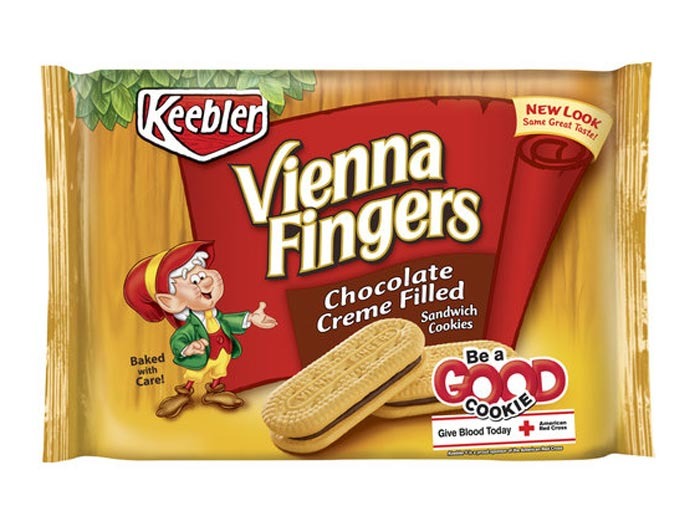 Sure, these cookies are a bit lower in fat than their full-fat counterparts, but as a result, they have more sugar. Plus, there are 140 calories in each pair of cookies. I don't know about you, but I don't know anyone that has the willpower to cut themselves off after two cookies. And according to research, sticking to reasonable portion sizes is far more difficult when consuming "diet" foods—likely because they're considered to be less health-harming. 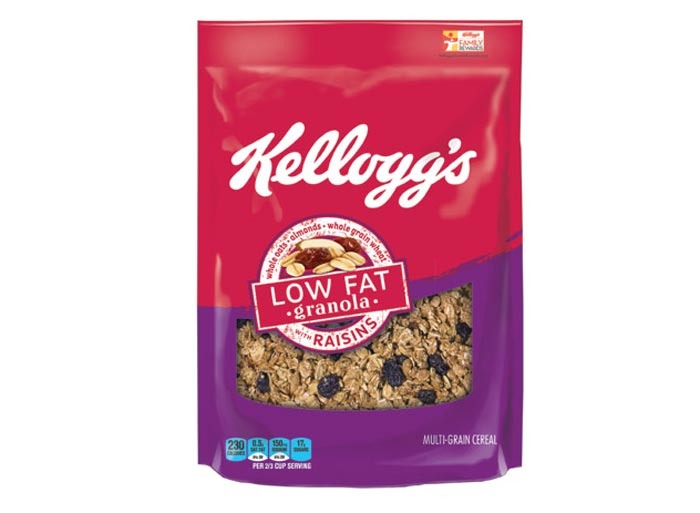 A whopping 30 percent of the calories in this cereal come from sugar, so frankly, I don't care how low in fat it may be; that's far too much of the sweet stuff! A one-cup serving also carries nearly 350 calories and 72 grams of carbs! We also can't overlook the fact that this cereal remains shelf-stable with the help of BHT, a highly controversial, potentially carcinogenic ingredient. 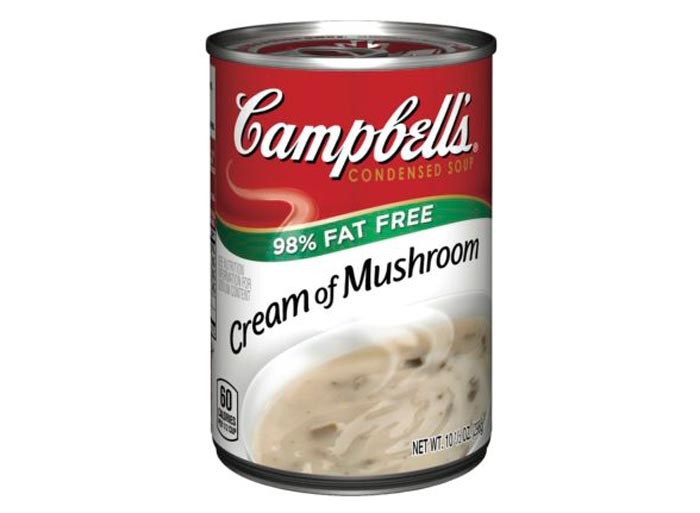 We don't care how much lower in fat this soup is compared to the original recipe, anything that contains MSG, partially hydrogenated oils, and more than a quarter of the day's salt intake in a single serving is a no-go in our eyes. When something like a low fat creamy soup hits the market, be skeptical. There's usually something fishy going on.