The Worst Option on the Menu at 20 Popular Restaurants

You know how some menus have options labeled with things like "House Specials" or "Lighter Fare?" The dishes below are the menu items that should be labeled "Worst Item on the Entire Menu." Steer clear of these dangerous options that are like putting a puffer coat on any belly fat you already have!

It's always interesting to debate who or what is the best in any category. Dark Side of the Moon or The Wall?, Vertigo or North by Northwest? Young George Clooney, or middle-aged George Clooney? The Big Mac, or the Quarter Pounder with Cheese? The 7-Day Flat-Belly Tea Cleanse or Zero Belly Smoothies?

But ranking the worst is a lot more fun. Nothing gets your blood up more than finding something gross, and then heading out on a valiant quest to find something even grosser.

Sadly, in the battle for gross and grosser, the team at Eat This, Not That! didn't have to look all that hard. From larded fried entrees that make James Cordon look lean to meals that are saltier than Amy Schumer's diary, today's restaurants offer up a smorgasbord of slick, sugary, salty suspects. We dare you to find anything worse than these! See which dishes to avoid at all costs (ordered by alphabet according to restaurant name) and then find out 25 Weight Loss Mantras Nutritionists Swear By! 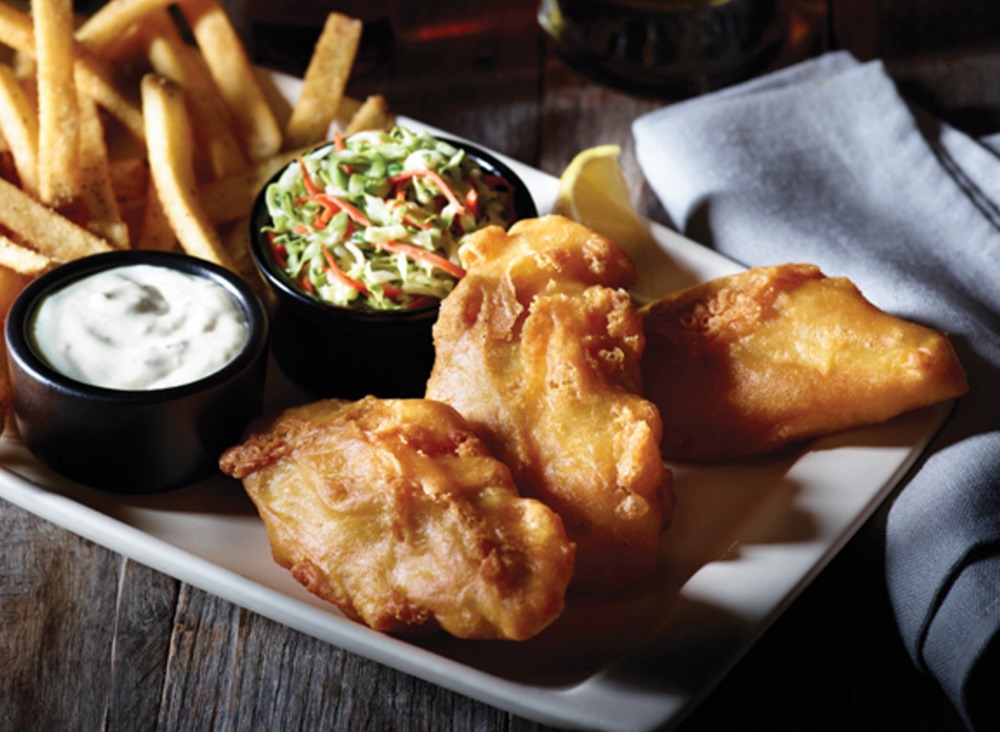 Attack of the beige! Whenever your dinner is monochromatic (in this case, the off-brown hue of deep-fried junk), you know you're in trouble. Choosing a dish like this is easily one of the Bad Habits That Make You Sick and Fat. Don't blame the fish—the seafood is packed with lean, muscle-building protein and heart-healthy fats. No, the trouble here, lies with a massively unbalanced fish-to-fat ratio. A coating of crispy batter and a heaping pile of deep-fried potatoes is no way to treat the golden child of nutrition. When it comes to seafood, always abandon ship on fried fish and opt for grilled instead. 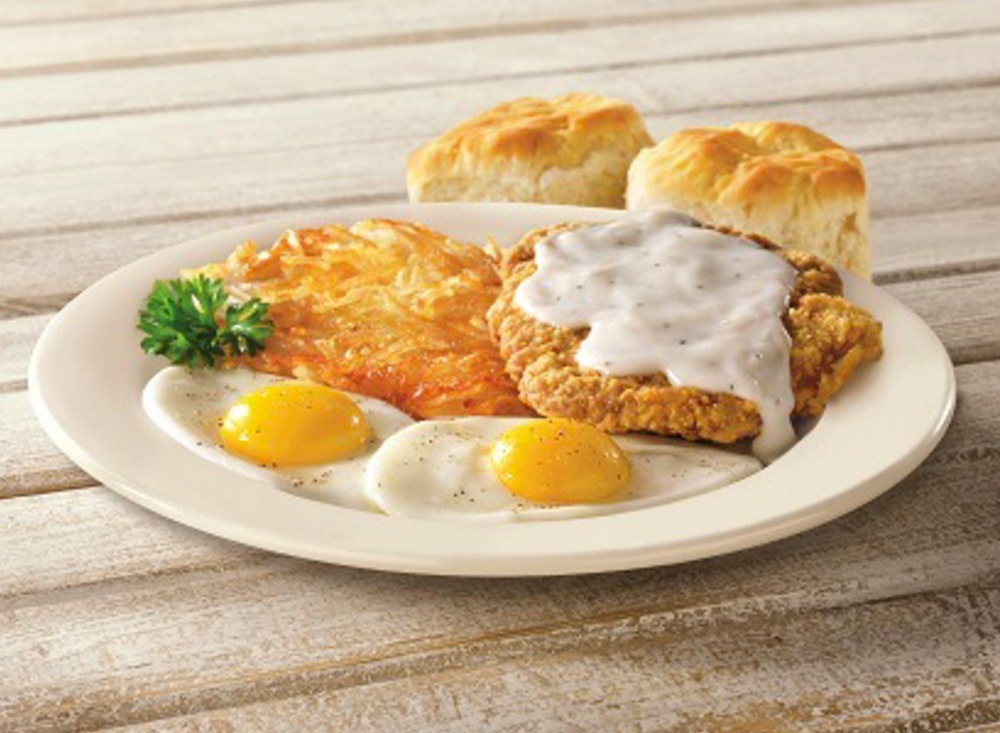 What has more than a day's worth of calories and salt and more sugar than seven Snicker's Ice Cream Bars? This sneaky diet-derailing dish. Where all that sugar comes from we may never know, but we can tell you this: This is one breakfast that will offer zero benefit to your day. Stay far, far away—especially if you've been trying to lose weight! 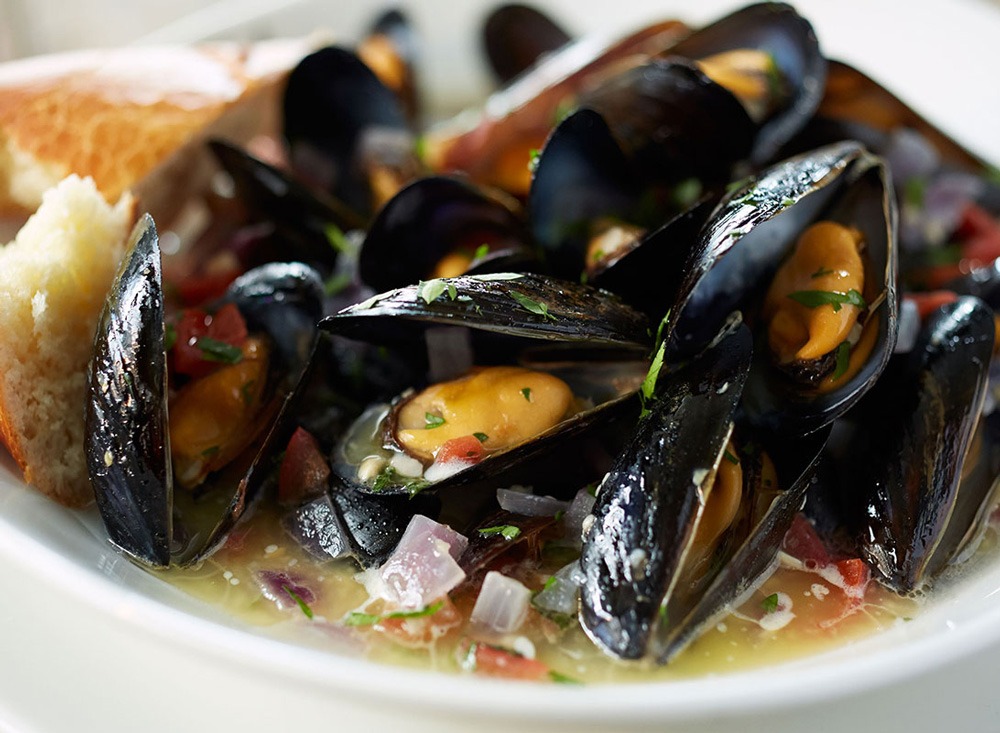 In their purest form, mussels are one of the lowest calorie proteins in the sea. But despite their innocent appearance, these are not your average mussel. After the chefs at Bonefish doused these guys in a fatty lemon wine sauce, the appetizer became your body's worst nightmare, serving up more than a day's worth of trans fat! But that's not all: Even if you split the entire lot with a friend, you'd still take in nearly an entire day's worth of salt—and that's before your entree even arrives! There are much smarter ways to spend your spare cash. 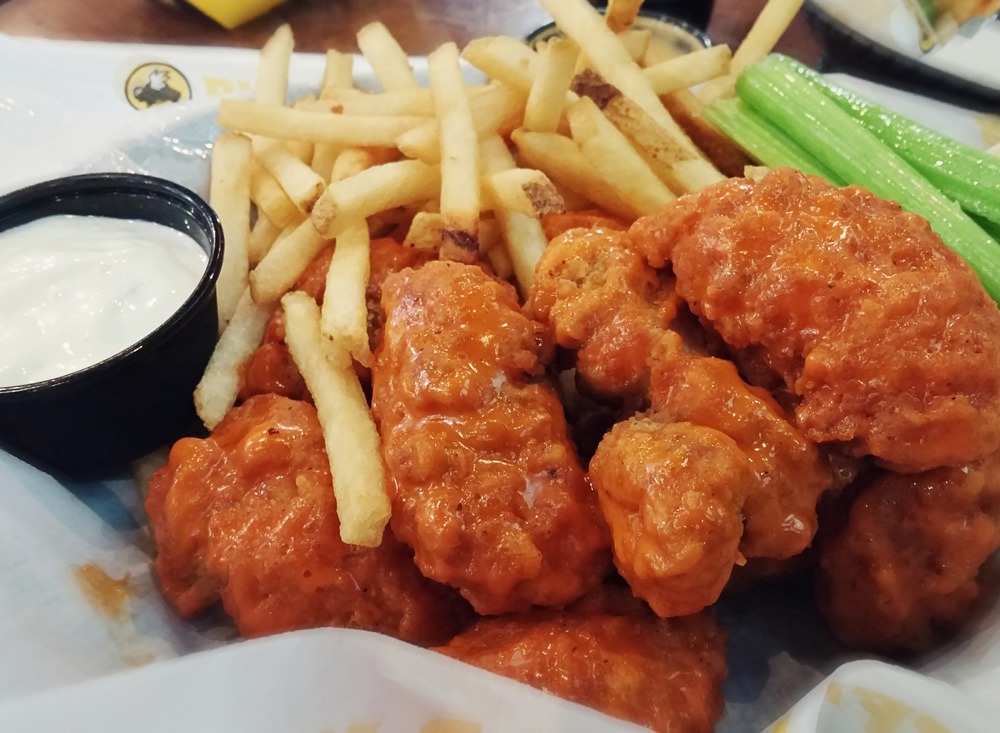 Each wing on this platter packs 107 calories, 7 grams of fat and a shameful 1,049 milligrams of salt. That means if you eat just two wings before your dinner arrives you'll have taken in a third of the day's fat and just under a day's worth of blood-pressure-spiking sodium! And let's be honest, who really stops after just two? Wings may be tasty, but there are far better ways to spend your salt allowance than on two tiny pieces of chicken. 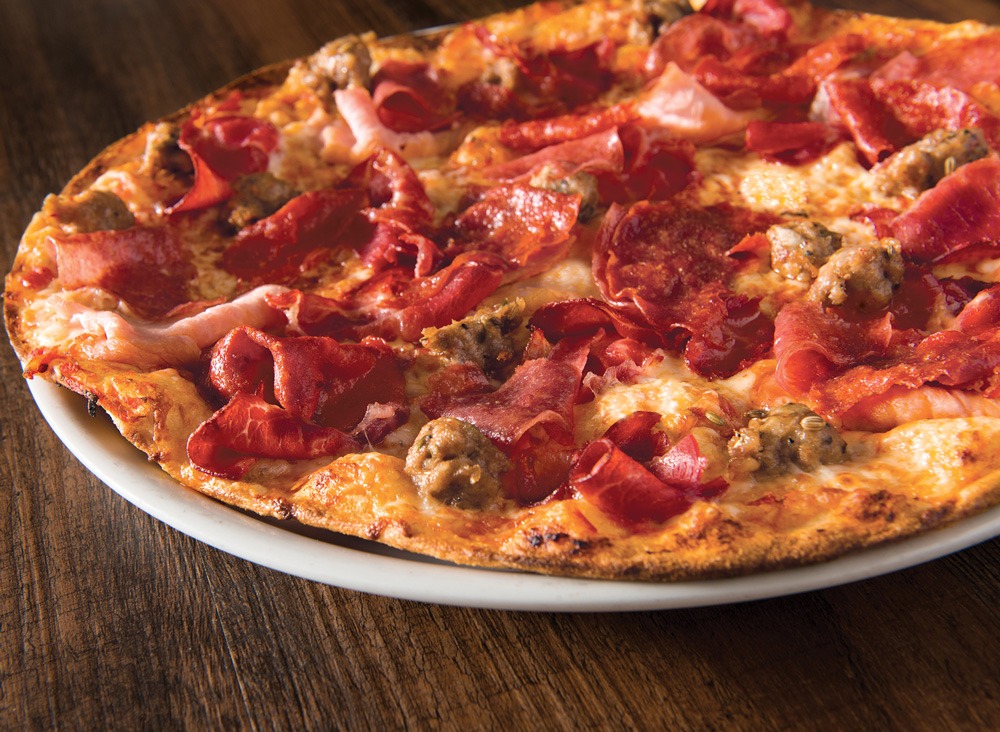 You had to have known that anything with the phrase "meat cravers" in the title wasn't going to be healthy—but we bet you didn't realize that it would have more salt than 33 slices of bacon and more carbs than what you'd get in eight slices of white bread. If you ate just one of these pies a month, you'd take in enough calories to gain 5 1/2 pounds in a year. Scary stuff, right? 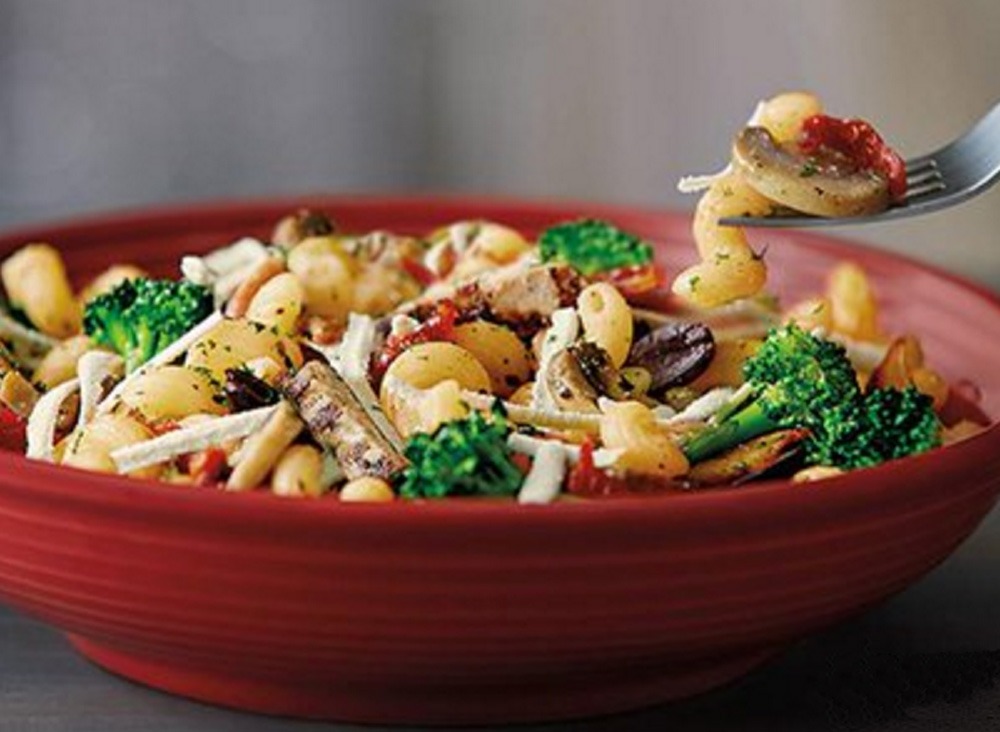 Grilled chicken! Mushrooms! Sun-dried tomatoes! Broccoli! Oh and let's not forget that whole grain spaghetti! When you read the list of the ingredients that goes into this dish, it's hard to imagine it would be such a nutritional nightmare. But this is the restaurant industry we're talking about here. Would you expect anything less? If you order the dish as pictured above with the tube shaped pasta, you'll actually save 191 calories and 26 grams of fat. Sub in the healthier sounding whole wheat variety, and you're actually far worse-off. No, we don't get it, either—and yes, we double-checked the math. Just keep things simple and steer clear of both versions of this preposterous plate of pasta. Looking for carbs that won't derail your weight loss progress? Then check out these 20 Best Carbs for a Flat Belly! 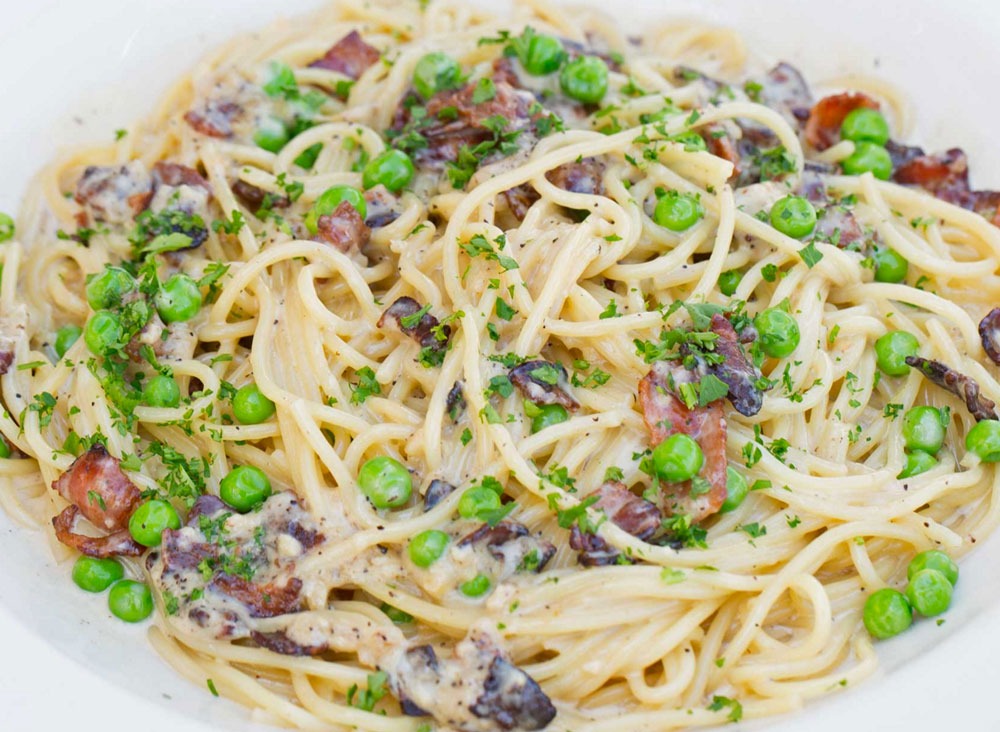 We give the Cheesecake Factory props for rolling out some lighter options as of late, but its menu is still home to some of the most caloric fare in the nation. What's worse, the Factory insists on keeping its nutritional info under lock and key. When it comes to the question, "Are you trying to hide something?" the answer for this restaurant is "Yes. A million times yes." This creamy pasta dish, topped with peas, bacon, and chicken, has more than a day's worth of calories and more saturated fat than 50 eggs! And that's just according to the nutrition data we could actually get our hands on. The Factory refused to dole out the latest stats when we asked. Take it from us: Shady business is never good news for your flat belly goals. 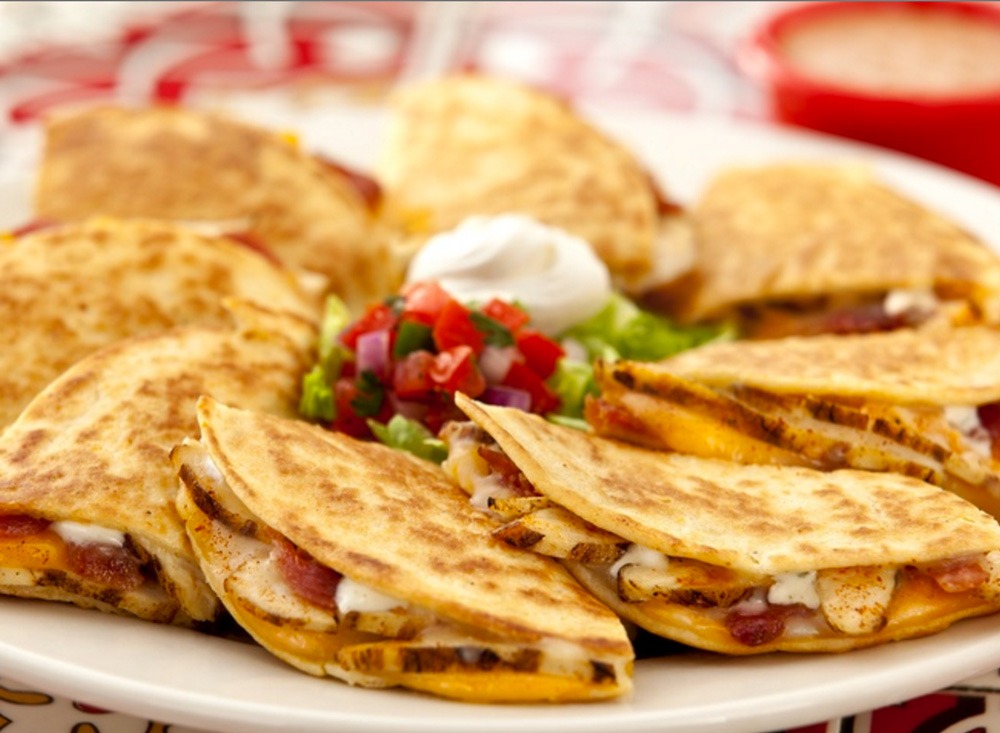 With nearly a day's worth of calories and more fat than 10 hot dogs, this southwestern inspired steak and bacon stuffed quesadilla will pop the button right off of your skinny jeans! Even if you shared it with a friend, you'd be taking in 2.8 times the American Heart Association's recommended daily intake of saturated fat. Make it a rule to avoid anything with the word quesadilla in the title when you're at Chili's (yes, even the salads) none of the options have less than 1,400 calories per serving—not what you should be eating if your goal is to lose belly fat. 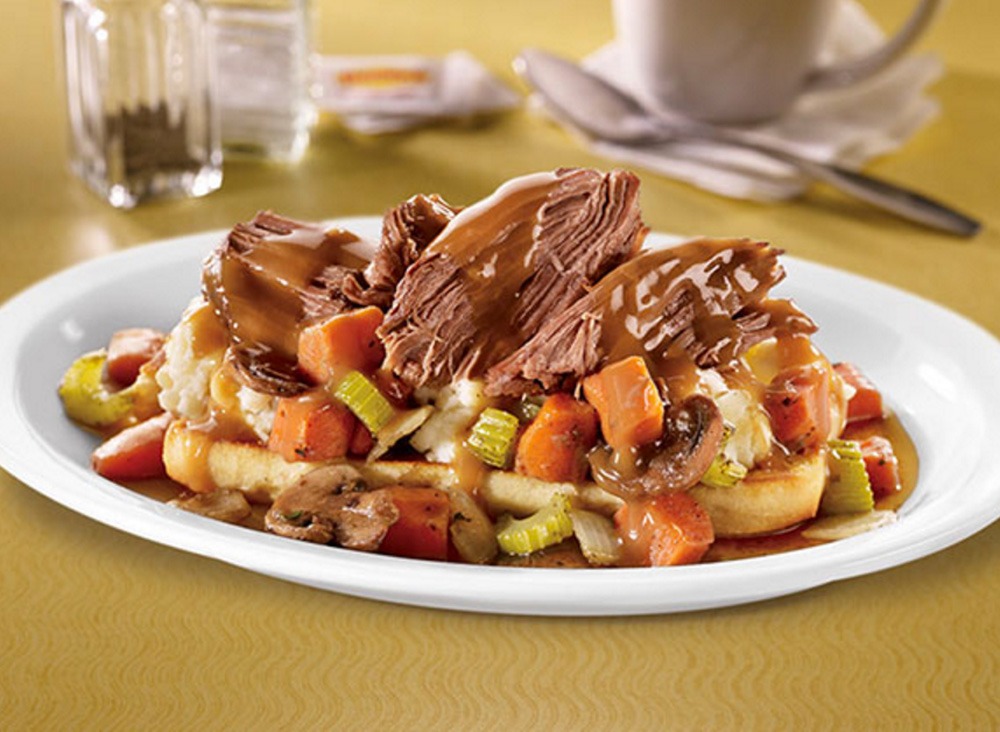 With nearly two days of salt and half the day's trans fat, this meal for one should really be split into thirds or quarters. Eat at your own risk! 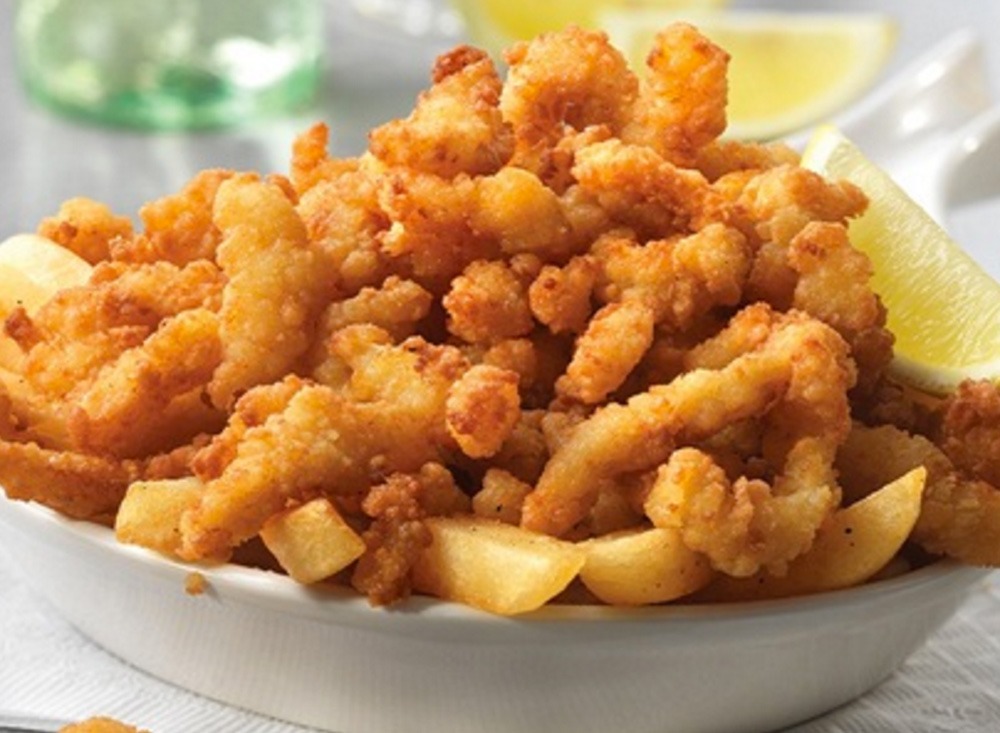 Unless you're stocking up to hibernate for winter, there's no reason to ever order a menu item that contain the word "platter." More often than not it's code for "way too many calories, carbs, and fat." Don't believe it? Consider this: This bland bowl of beige serves up more carbs than 19 chocolate chip cookies and more calories than 122 small clams. Proceed with caution at the not-so-friendly restaurant—and be sure to steer clear of these 23 Restaurant Foods With Crazy-High Amounts of Sugar, too. They'll all undo all of your valiant weight loss efforts. 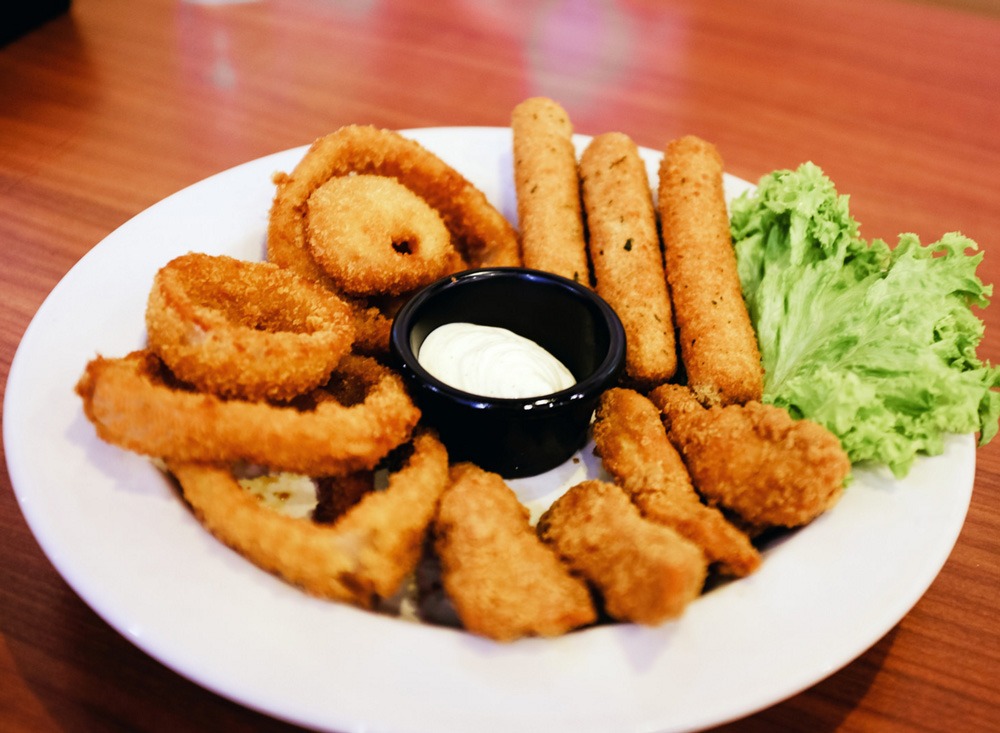 Just look at that plate of crispy beige nastiness! "Monster" mozzarella sticks, onion rings and chicken strips all on one plate? This dish is a giant fat bomb tainted with trans fats and sky-high levels of salt. Even if you split it with a friend you'd still offset an entire day of smart eating! Wondering what other foods you should steer clear of to trim down? All of these 150 Worst Packaged Foods in America fit the bill. 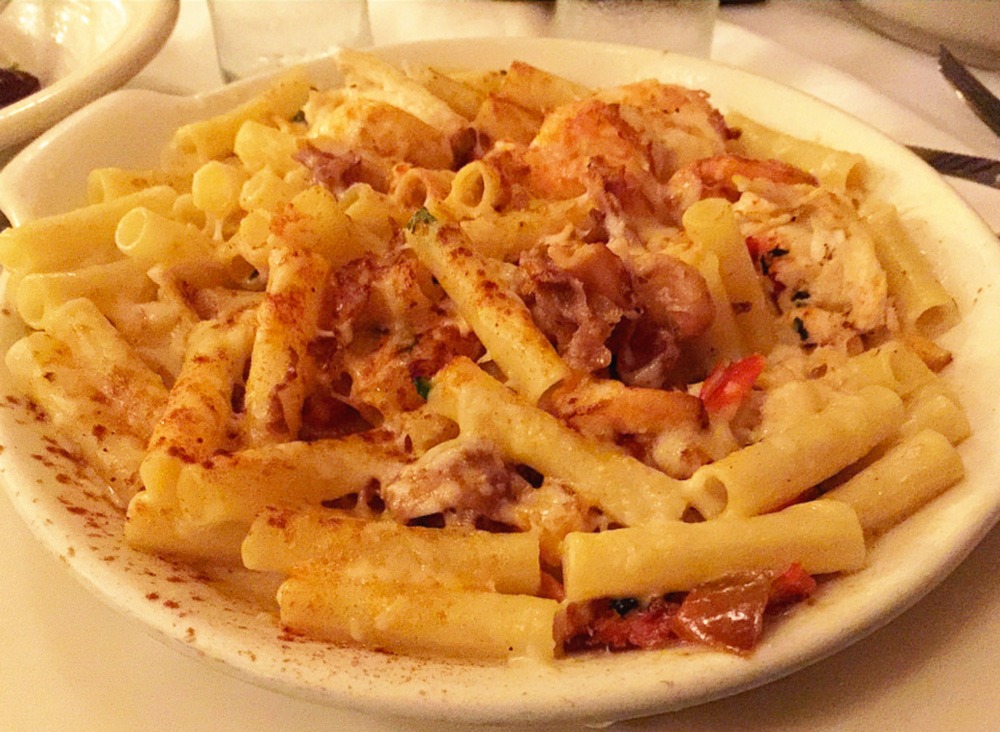 Ziti, prosciutto, asiago cheese, and red pepper cream sauce join together to create this artery-stiffening dinner disaster that packs more than a day's worth of trans fat. Not convinced you should add it to your "do not eat" list? Consider this: A 150-pound woman would need to run for nearly three hours to burn it off. And this is only the entrée! Add your appetizer, dessert, and a drink, and it's easy to amass half a week's worth of calories in one meal at Maggiano's. If you're craving a starchy meal, indulge with these 25 Best Carbs for Weight Loss instead.

When it comes to contributing to our nation's ever-expanding collective waistline, O'Charley's, home of Free Pie Wednesdays and caloric southern-inspired fare, is certainly doing their part. And this dish is no exception. Sitting down to a giant plate of nutrient-void cheese wedges, chicken tenders and "overloaded" potato skins is a recipe for disaster if you're trying to improve your health—even if you consider it one of your weekly cheat meals. 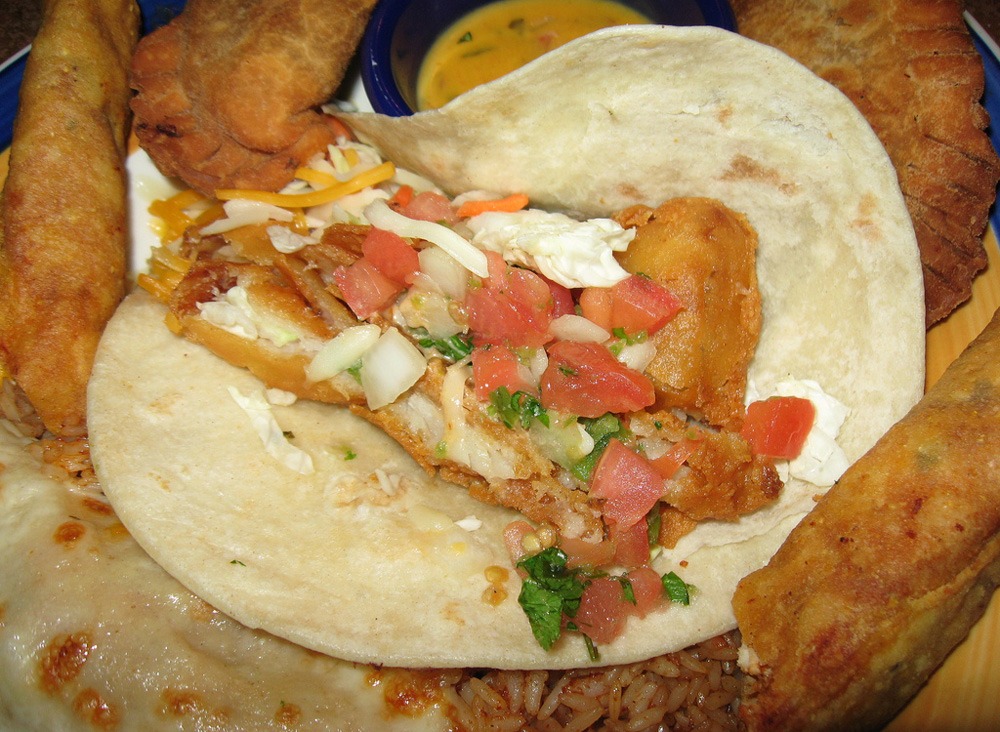 For $12.99, On the Border will give you a full day's calorie intake, nearly two day's of salt and three days of fat in the form of their beer-battered, deep fried fish tacos. Think ordering a grilled fish taco from the restaurant chain is a better pick? Think again.Their Grilled Mahi Tacos pack over 1,000 calories, too! Yikes! Remember when fish was actually healthy? Us, too! And in your kitchen it still is. These 6 Best Fish for Weight Loss are all far better bets for your health and waistline. 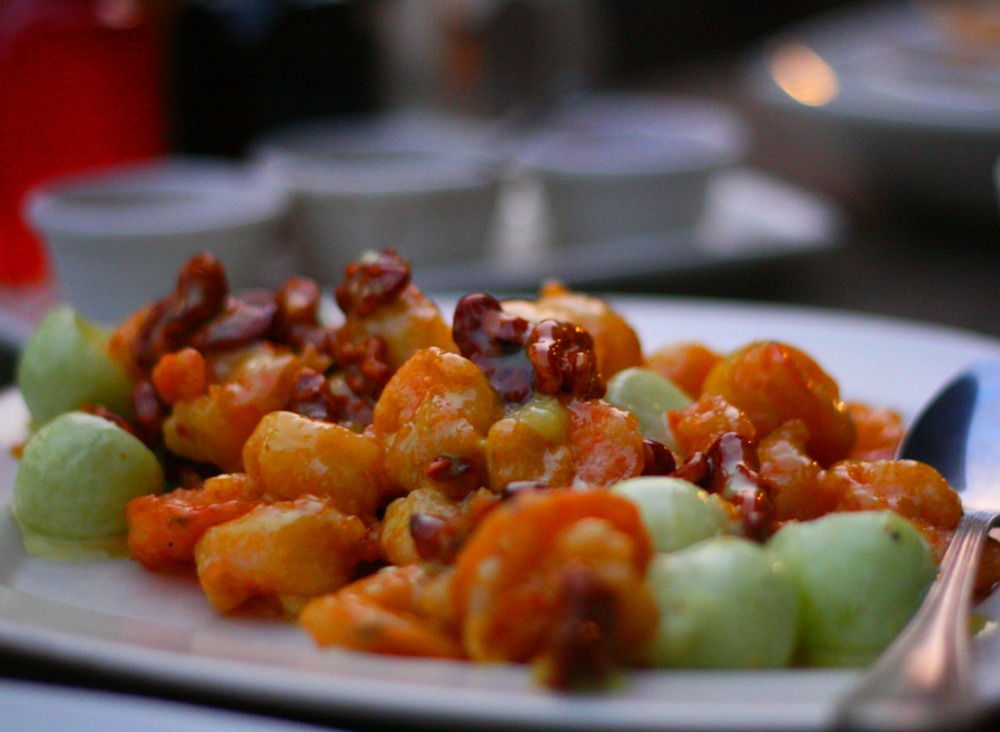 A combination of shrimp, melon and walnuts seems innocent enough to the naked eye, but don't be fooled! Thanks to the addition of aioli sauce (which is really just code for artery-clogging fat) and a heavy sugar-crusting on the nuts this dish is far from nutritious. For some context, this dish carries more fat that four large orders of fries from McDonalds! 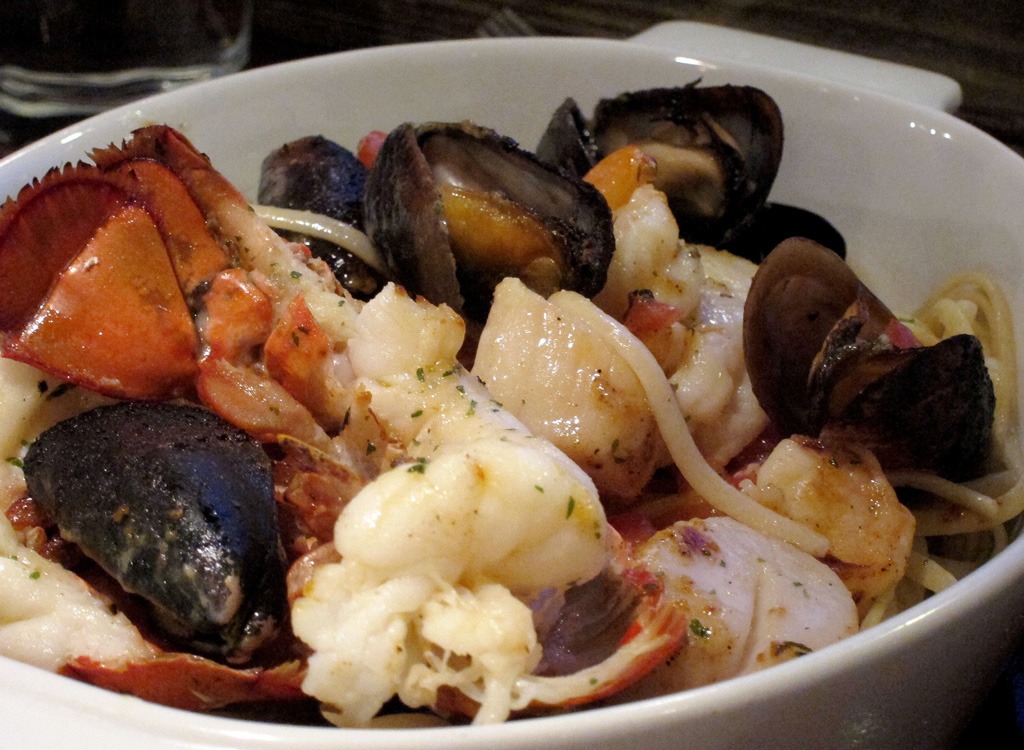 It's hard to screw up a plate of roasted lobster tail, shrimp, sea scallops, and mussels but by adding on linguini and a fatty garlic and white wine sauce, Red Lobster manages to transform a protein-rich plate of seafood into one that can give you an instant heart attack. Just say no to this disgusting, deep sea diet bomb. 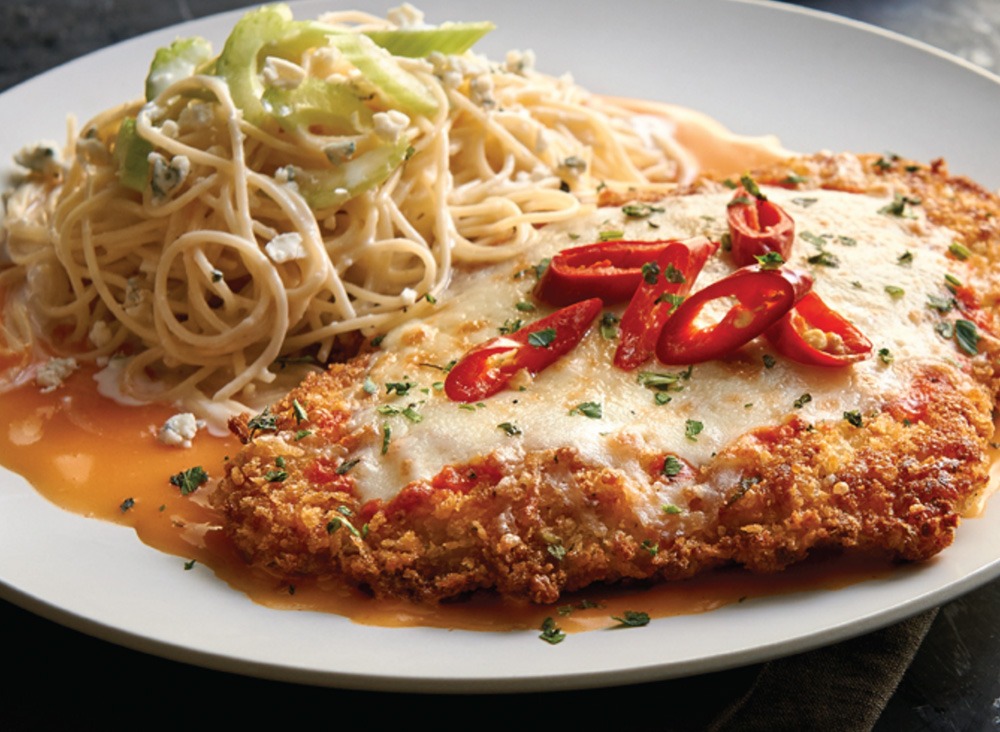 Beware: This isn't you bubby's classic chicken parm! The massive serving of pasta under the poultry is doused in a gorgonzola cream sauce and the Milanese-style chicken is piled high with fatty mozzarella and sodium-filled buffalo sauce. And even if you split this dish with a friend, you'd take in half the day's calories and salt and 2.4 times the daily recommended intake of saturated fat. But all hope is not lost pasta fans; to eat your favorite Italian noodles without loosing your figure, check out these 40 Ultimate Pasta Tips to Stay Skinny! 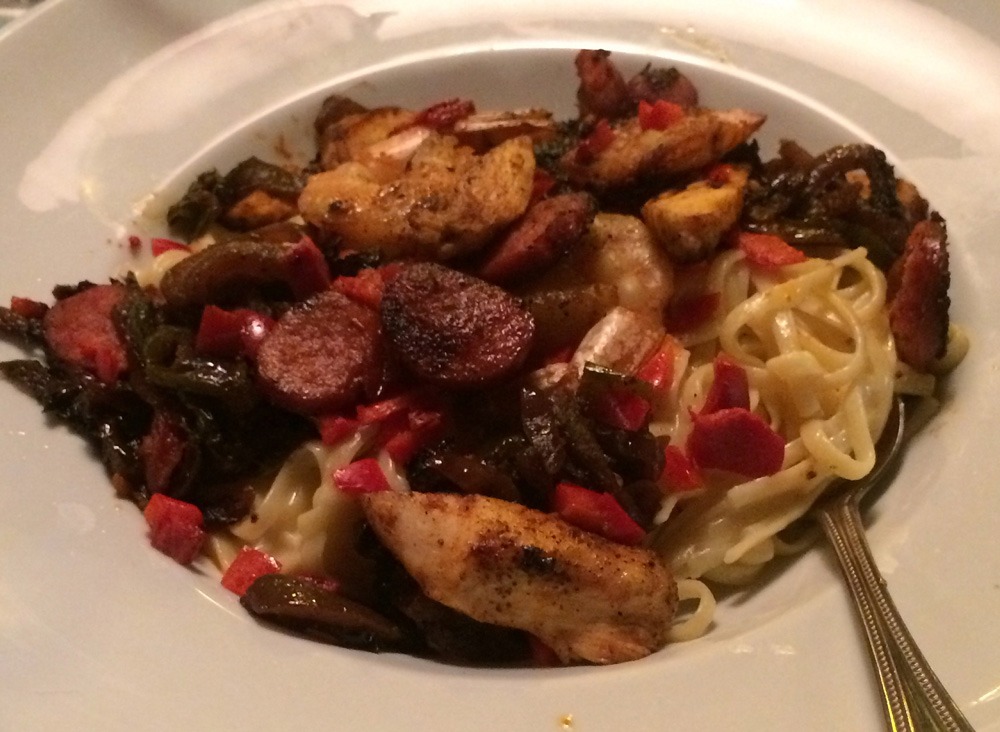 This cream sauce-topped shrimp, chicken, and andouille sausage concoction makes a mockery of the classic better-for-you Cajun dish. In fact, all of the pasta dishes at Ruby Tuesdays carry more than 900 calories! Stay away if you want to stay slim. 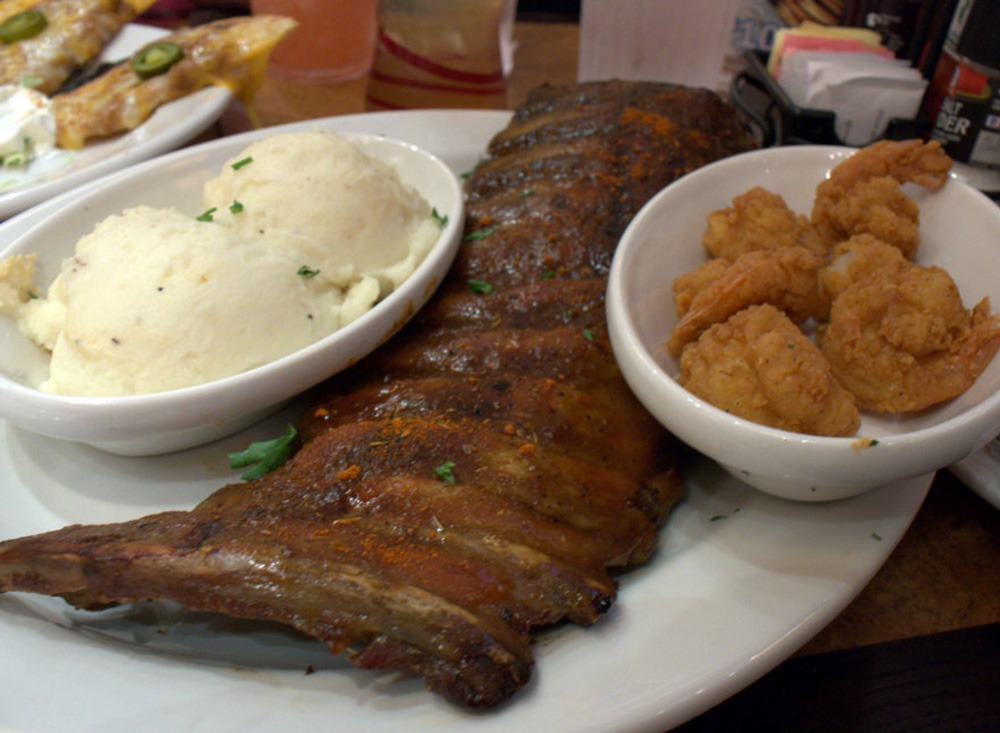 Three words sum up this dish: Salty, carb-laden disaster. You'd be better off eating four McDonald's cheeseburgers than sitting down to this meal. It's hard to imagine, we know, but you'd actually take in fewer calories and carbs and a staggering 1,280 fewer milligrams of blood-pressure-spiking salt. For more calorie-saving hacks check out these 20 Weight-Loss Secrets from Insanity Trainer Shaun T! 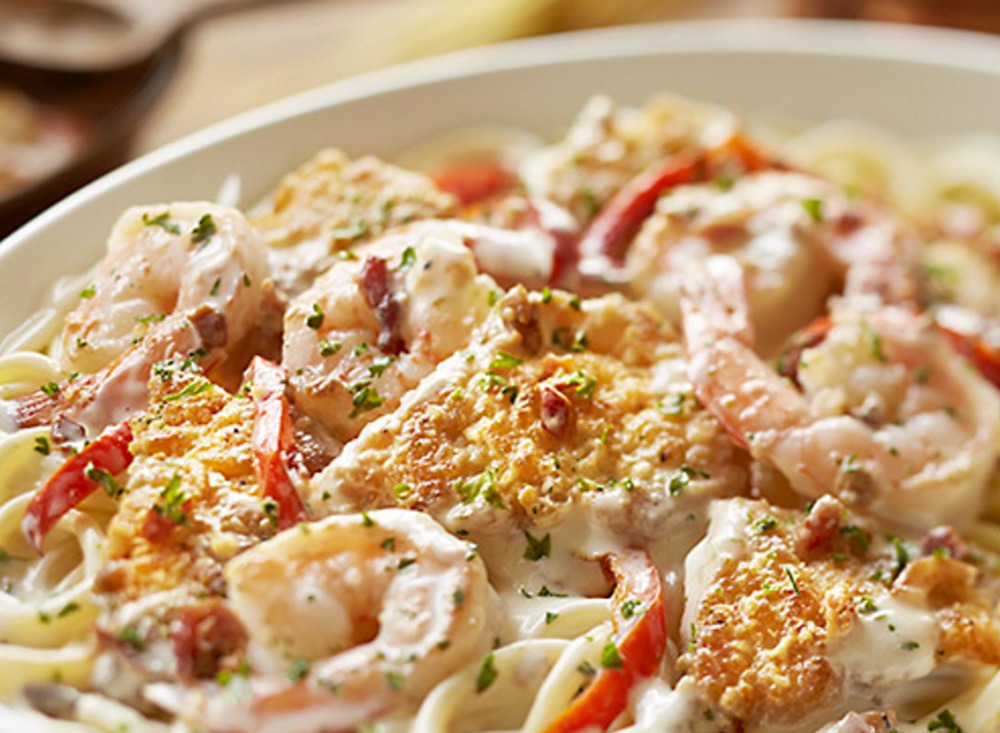 Olive Garden's menu is in desperate need of a makeover. The seafood is swimming in sodium, the cocktails are packed with sugar and the average dinner-size plate of pasta packs a staggering 976 calories—thanks in part to the soggy plate of carbs pictured above. Not only does it pack nearly a day's worth of sodium, it also serves up a day's worth of trans fat, an artificial fat that's been linked heart disease. All of this is before you tack on the breadsticks and salad.