6 Foods That Ease Every Hangover

When it comes to drinking, it's all fun and games until someone wakes up with a hangover. The headache, fatigue, nausea, dizziness, and other less-than-fun symptoms can keep you from getting your day started. Unfortunately, there's no magical meal that will totally cure your hangover, but there are certain foods that can help ease the pain.

While a burger and fries may be your go-to hangover remedy, we're sorry to say that greasy indulgences didn't make the list. Read on for the breakdown of the best foods to eat to reduce your hangover symptoms—the healthy way.

Why It Works: You went pretty hard last night and now your stomach hurts, you're totally wiped out and your mouth feels like the Sahara Desert. We've all been there, and we know it's not easy being you right now. The good news is, there's an easy cure-all for those nasty symptoms: Red ginseng. A 2014 Korean study found that consuming a little less than half a cup of a red ginseng beverage (like tea), can fight alcohol-induced fatigue, stomach pain, and thirst more effectively than equal amounts of water. Go figure! So go ahead and brew up a cup, crawl back into bed and shake it off—you're sure to feel better in no time.

Your Ailments: Headache and Dizziness

The Cure: A Sports Drink

Why It Works: If it sounds like the DJ from the club is still playing house beats in your head or, even worse, the crazy strobes from the after party seem to have followed you home, it's time to drag yourself out of bed and grab a glass of water and a low-sugar sports drink. While we don't normally recommend downing the stuff, in this case it will do you more good than harm. With fluid-balancing electrolytes and a touch of sodium, a Gatorade or Propel will help you start feeling like your old self and counteract the dehydration responsible for the spinning room and splitting headache.

Your Ailments: Nausea, Hunger and Bloat

The Cure: Greek Yogurt with Half a Banana

Why It Works: Last night you guzzled down an entire bottle of champagne with gusto at your BFF's bachelorette party. Today? Well that's a different story. Your enthusiasm has been replaced with a confusing combination of hunger and bloat that's best described as "blah." Though alcohol causes dehydration, it also makes it hard for the body to maintain blood sugar balance, which is why you're experiencing seemingly contradictory symptoms.

To banish the bad feelings, reach for some Greek yogurt topped with half of a banana. Both the creamy stuff and the fruit are easy on the stomach and rich sources of potassium, which can help banish bloat. The yogurt's protein and carbs also help stabilize blood sugar and fight the associated mix of nausea and hunger.

Your Ailments: Nausea, Fatigue and Headache

The Cure: An Asparagus Omelet 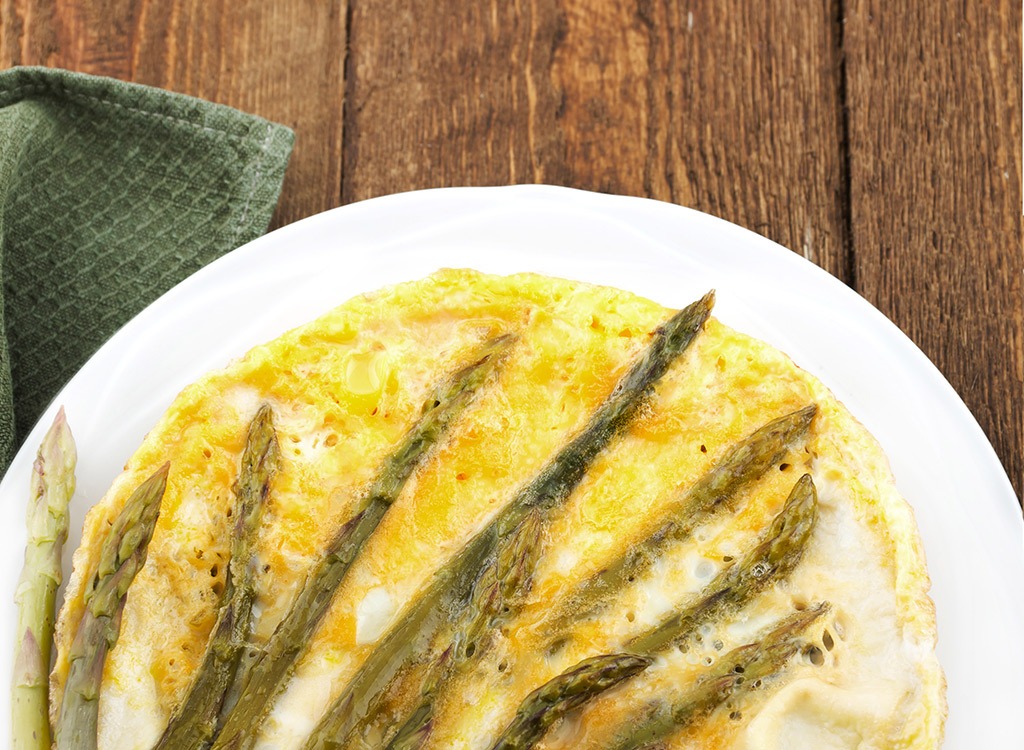 Why It Works: Hitting the bar for some beers with your bros is always a good time. The morning after? Not so much. Kick that tired, head-pounding, want-to-throw-up feeling to the curb with an asparagus omelet. Science says it's a powerful post-partying pain fighter. Here's why: Eggs are a rich source of cysteine, an amino acid that helps break down alcohol's leftover toxins. Why the greens? Asparagus fuels your body with hangover-helping amino acids and minerals that can ward off nausea, fatigue, and headaches, according to a Journal of Food Science study. Sounds like a pretty good reason to whip out a spatula and pan to us!

Why It Works: We get it: The queasy, hellish mornings that follow a night out on the town can make you swear you'll never drink or eat anything again. But consuming some ginger when you feel like you're about to toss your cookies is well worth the extra effort. Although there haven't been any studies on the plant's effectiveness on hangover-induced nausea yet, the spice has a long history as a natural remedy for morning sickness, upset stomachs and motion sickness, so it just might be your savior. The best way to consume it is from a cup: Throw chunks of chopped ginger root into a mug, pour in boiling water and cover the cup with a plate to let the flavor steep for five minutes.

Why It Works: So you made some bad decisions last night that you want to pretend never happened. Although it happens to the best of us, that still doesn't change the fact that you may be feeling anxious or upset. Fight back against the angst and feelings of unease with a hot bowl of soothing oats. A 2012 review found that eating starchy carbohydrates like oatmeal can improve mood more effectively than consuming simple sugars like a bagel or Fruity Pebbles. Previous studies have also found that carbs help boost serotonin—the feel-good hormone—which may help you feel a bit better about last night's blunder, too.6254a4d1642c605c54bf1cab17d50f1e