The 30 Best & Worst Packaged Deli Meats On the Shelves

Think you're doing your bod a favor by brown-bagging it? Think again.

We know we're about to break the hearts of lunch-preparing moms and dads everywhere, but those cold cuts might not be trustworthy. And it's not just about your kiddos; you could be sabotaging your own figure. Just a couple slices—no, really, just two of those thinly-sliced pieces of lunch meat—have more sodium than a bag of pretzels; that's 450 milligrams! Sodium, a known contributor to hypertension, not only makes your belly bloated, but it's also a risk factor in the development of heart disease when eaten in excess.

As for the nitrate and nitrite debacle? Here's what you need to know: All "cured" deli meats include sodium nitrate and nitrite as preservatives to keep the cuts free from harmful bacteria. To claim "All Natural," brands substitute these artificial additives for their naturally-occurring counterpart—celery powder—and dub themselves "uncured." But whether it's the synthetic version or from celery powder, it's basically the same thing, according to Lisa Moskovitz, RD, CDN. She also tells us there's no verdict on whether nitrates are harmful or safe. (Ever seen beet juice nitrates being marketed to help boost your endurance?)

What we do know is this: the World Health Organization (WHO) released a study in 2015 linking high consumption of processed meats (which equates to four slices of bacon a day) to colorectal cancers. However, the authors of the study say that the occasional hot dog is okay. The takeaway? As long as you grab good-quality meat made with good-for-you ingredients, eating a sammy with deli meats once or twice a week isn't going to do a ton of damage. What's more important than choosing a nitrate- or celery-juice-preserved meat is actually eating a predominantly plant-based diet, which has been connected with the lowest incidences of cancers and other diseases when compared to those who eat the least amount of produce.

Below, you'll find some of the best and worst lunch meat brands on the market. And if you can't find the brand we've recommended in your own grocery store, use the chosen product's nutritional information and ingredients as a guide to what you should look for. Once you've chosen a meat, find out where the rest of your sandwich add-ons stack up in our exclusive guide of The Best & Worst Bread in America—Ranked! 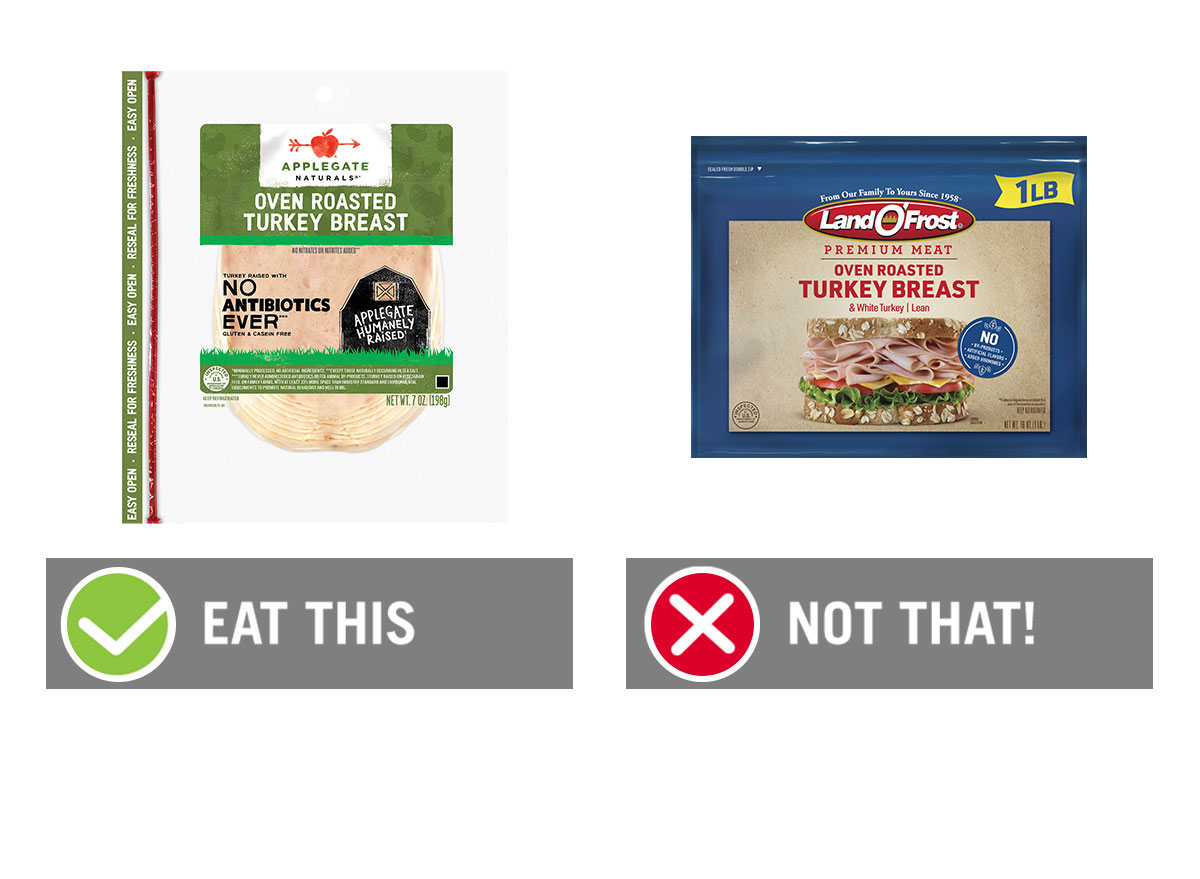 Lunchtime has far surpassed Thanksgiving as the most popular time for getting your tryptophan fix, but are you also indulging in a daily sodium bomb? You will be if you're going with Land O'Frost's "Premium" Oven-Roasted Turkey Breast, which is mostly made up of the blood-pressure-raising stuff combined with "flavorings" and MSG. To get more protein—and way less sodium—go with Applegate's humanely-raised lunch meat. Do this, and you won't fall prey to one of the little things making you fatter and fatter—ignoring sodium! 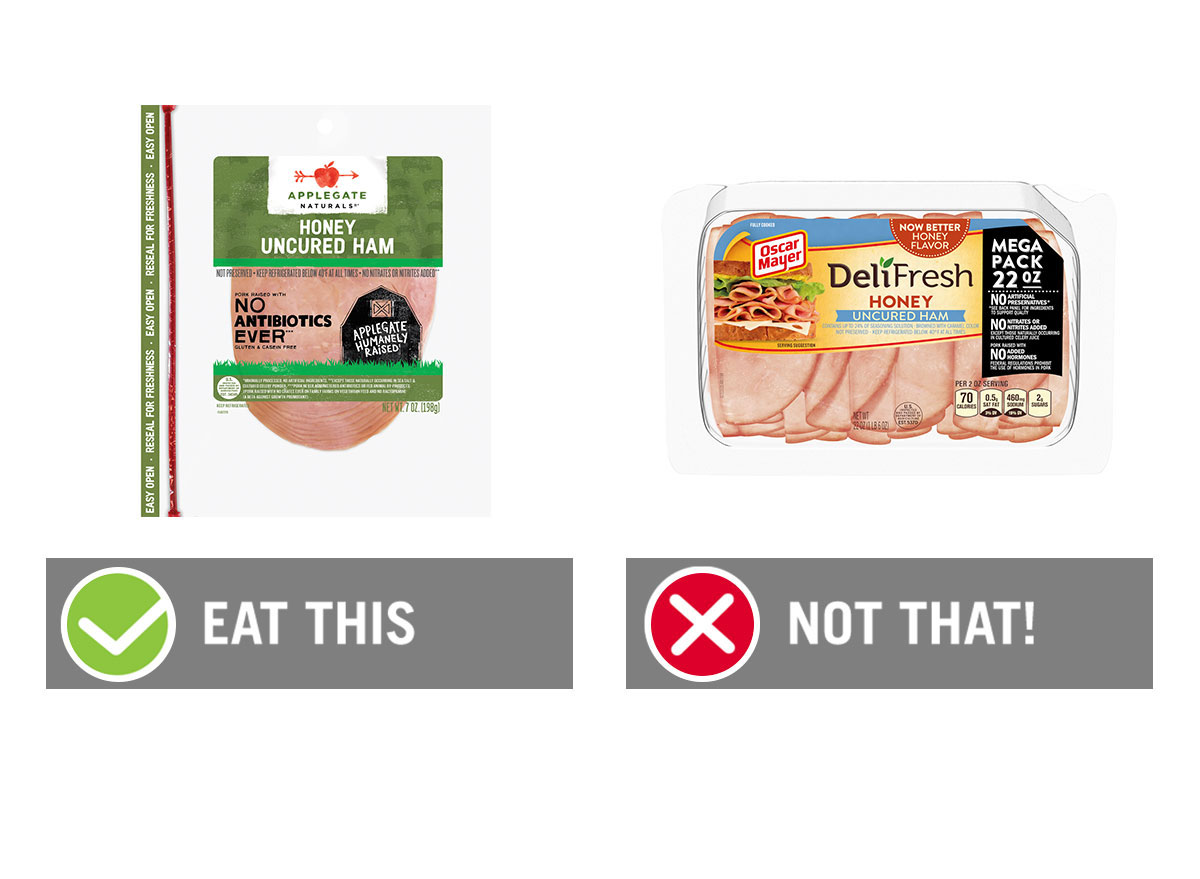 Oscar Mayer figured out how to throw in 560 milligrams of sodium including sodium phosphate, an ingredient whose high intake has been linked to higher rates of chronic kidney disease and weak bones. Even though phosphates are a necessary part of our diets, excess phosphate is more easily absorbed by the body and can lead to high levels of phosphate in the blood, which may put you at risk for heart disease. Concerned about heart disease? Check out these foods that lower cholesterol! 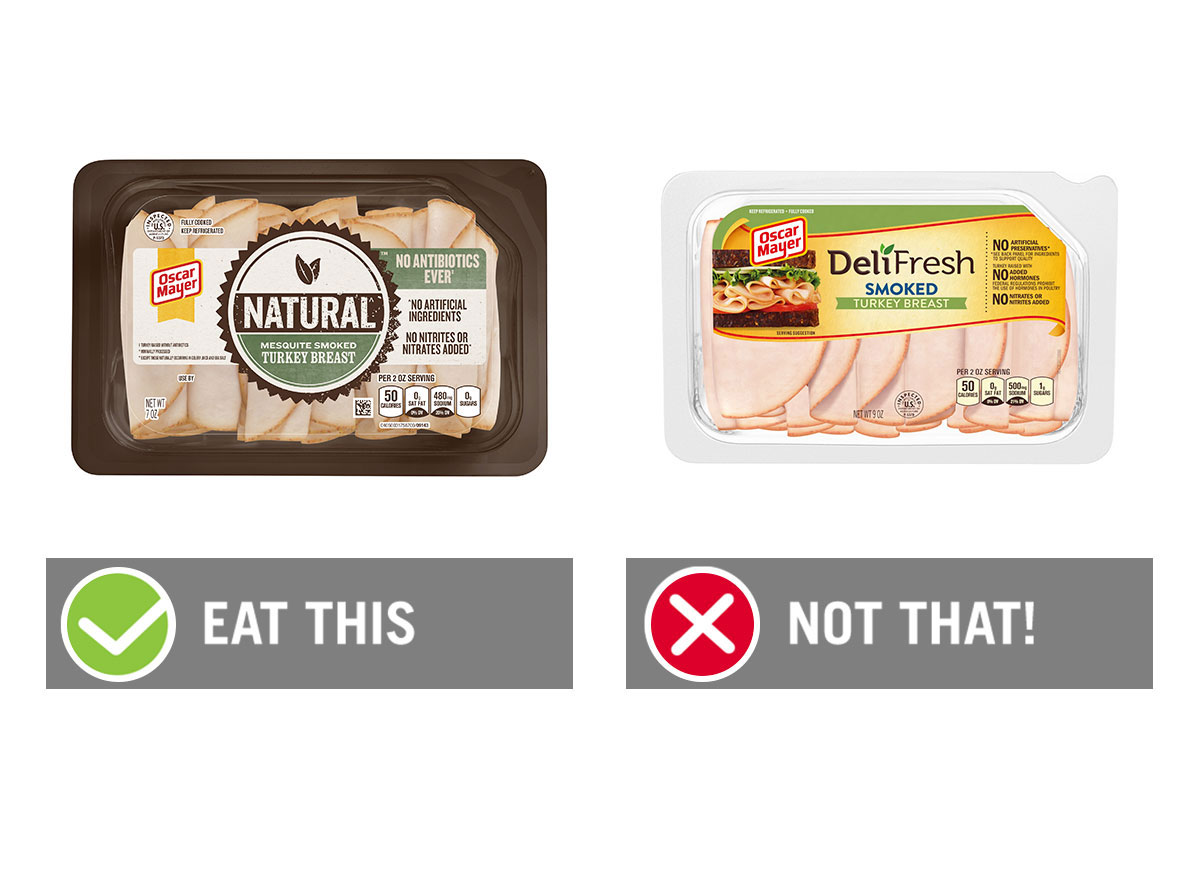 Lower in sodium, higher in protein, and free of all the artificial ingredients of its sister brand, Oscar Mayer finally churns out an okay product with their NaturalMesquite Smoked Turkey.

If you don't mind the extra sodium—it's still a bag of Ruffles less than Saag's option—Hormel offers a Natural Choice Smoked Deli Ham with good-for-you ingredients as good as those from the leading brand of good meats, Applegate. Saag's, on the other hand, is not only full of sodium, it but also carries sodium erythorbate, nitrites, corn syrup, and propylene glycol; we don't think you'd be able to find those in your pantry. 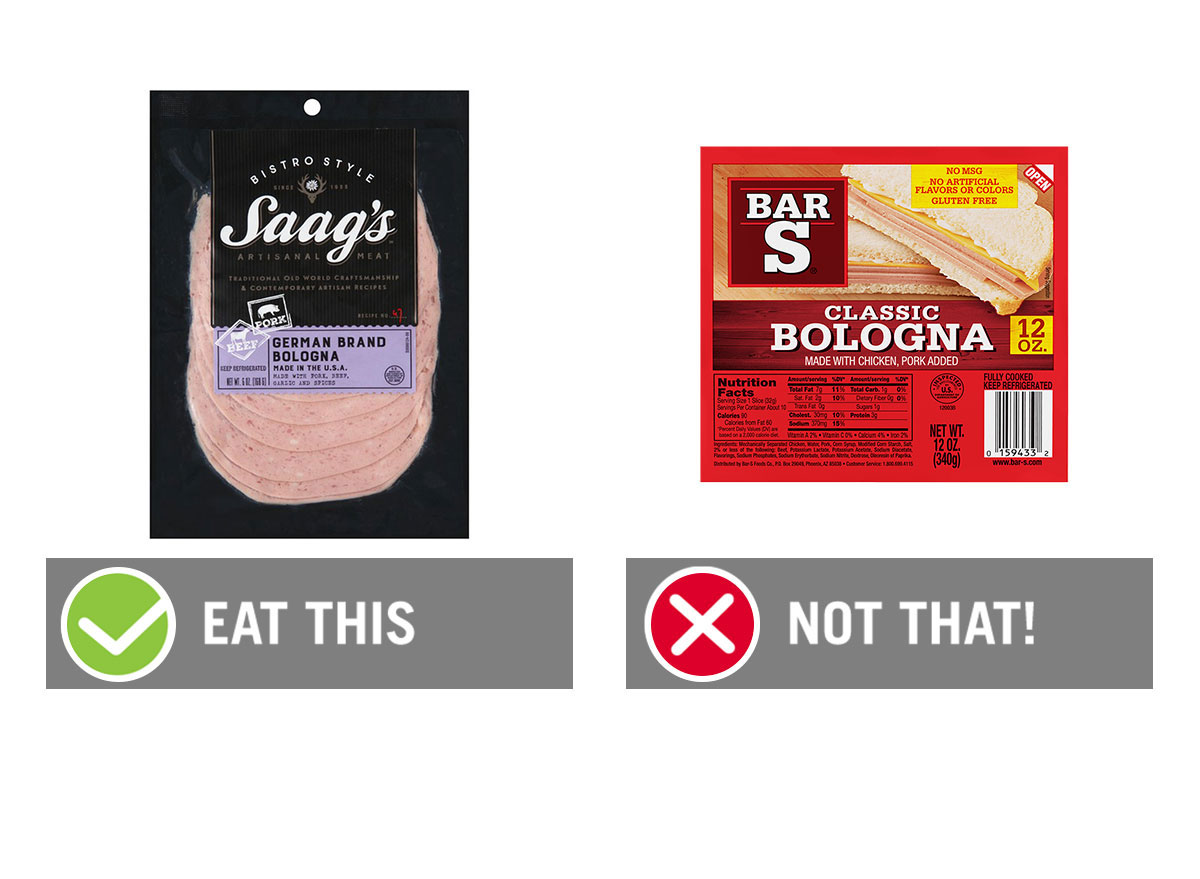 Not That: Bar-S Classic Bologna

A smoked, seasoned sausage usually made up of pork and chicken, bologna is the black sheep of deli meats thanks to being so over-processed and concentrated in sodium. (Those nutritionals you're seeing above are usually for a single slice, compared to the nutritionals of deli meats which are 4-5 slices per serving.) To avoid the modified corn starches and potassium acetates, grab a package of Saag's over Bar-S—and you'll also save yourself the calories, fat, and sodium. 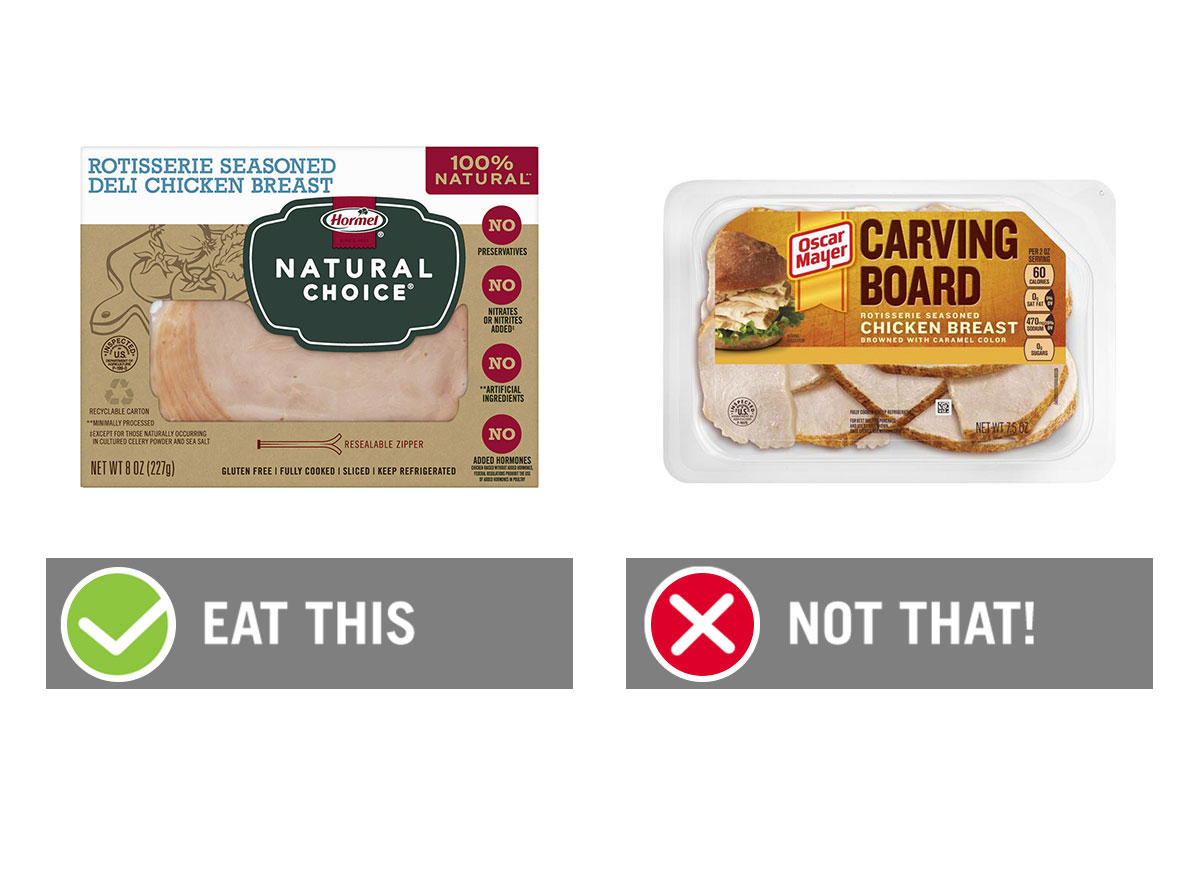 Not That: Oscar Mayer Carving Board Rotisserie Seasoned Chicken Breast

Who knew you could screw up chicken this much? These slices of Oscar Mayer Oven Roasted Chicken are browned with caramel color and doused in "cultured corn sugar"—a "label-friendly" fermented corn sugar that apparently minimizes listeria growth. Stick with Hormel's Natural Choice to taste chicken and not the "rotisserie chicken flavoring" of yeast extract (a "natural" alternative to MSG that is added to products to enhance its meat-like taste instead of letting the meat speak for itself) and "flavor" that you'll find in Oscar Mayer's option.

RELATED: 7 Dangerous Side Effects of Eating Deli Meats, According to Experts 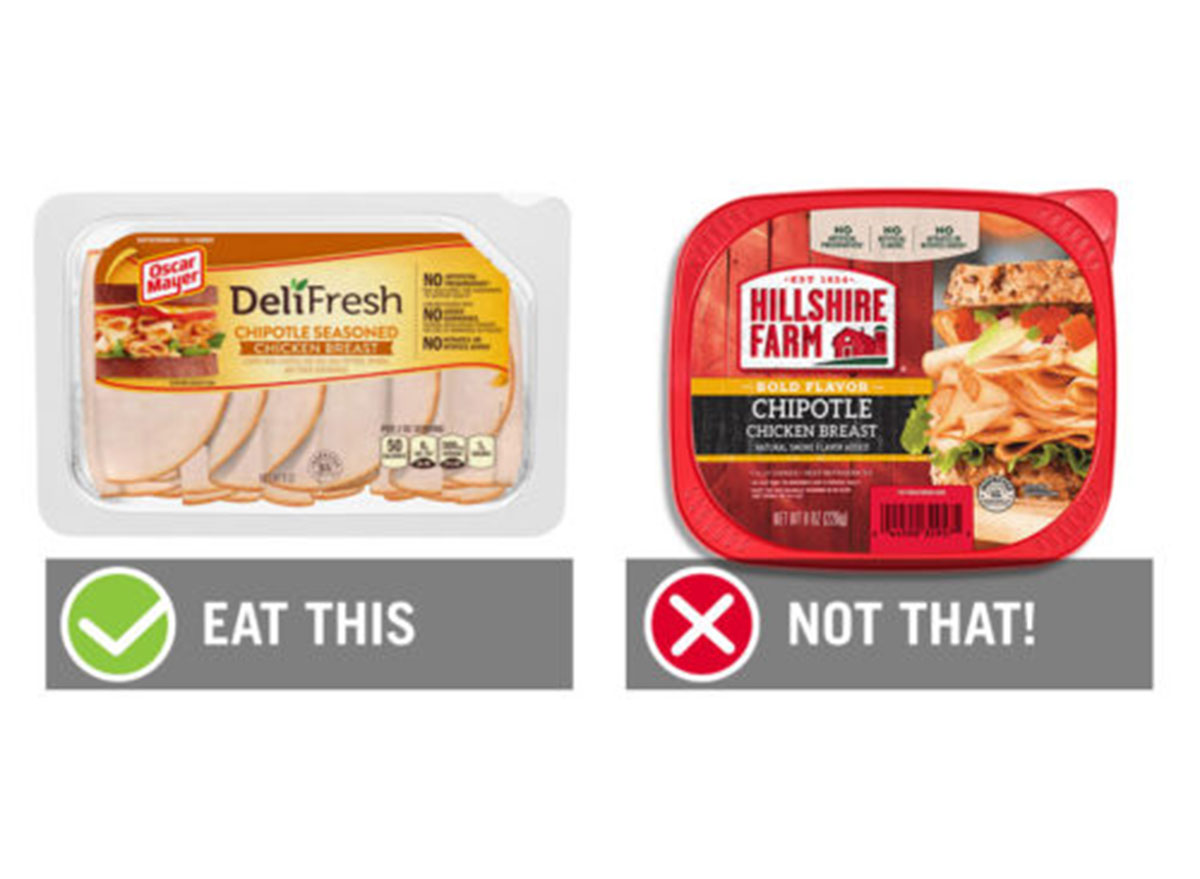 Complexly spicy and satisfyingly moist, Oscar Meyer's sliced lunch meat is made without any antibiotics, nitrites, nitrates, or added hormones. The same can't be said of Hillshire Farm's Chipotle Chicken Breast. Not only do they use added nitrites, they also use natural mesquite smoke flavor, three different ingredients that contain MSG, and more "natural flavor" than real spices. Oh, and did we mention just three slices are packed with a quarter of your day's worth of sodium? That's definitely not the solution to how to get rid of bloating. 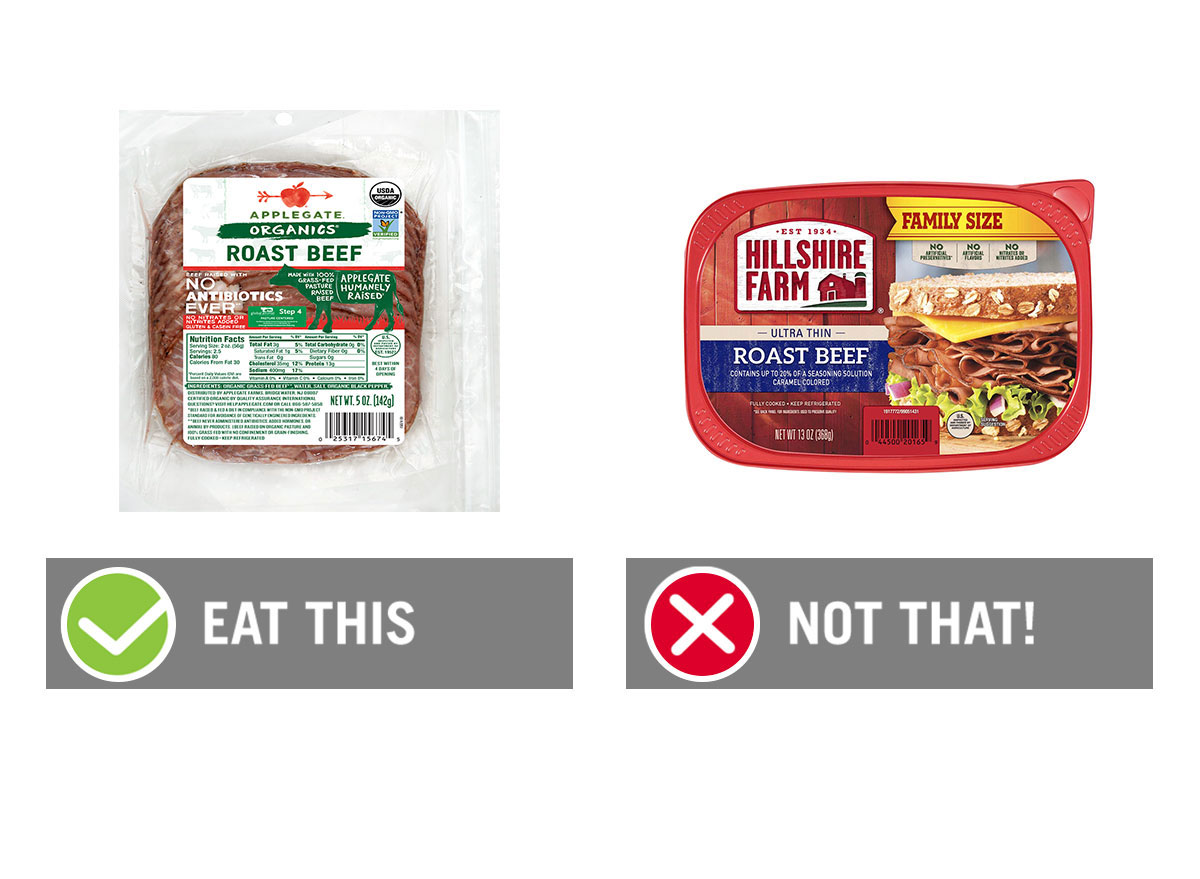 Leave the beef flavor and caramel color—er, we mean Hillshire Farm's Roast beef—on the shelf and grab a package of Applegate Organics Roast Beef. Made from organic beef, which studies have found to be higher in heart-healthy omega-3s than conventional cuts, these slices will be the best meat for your French dip or sandwich with spicy horseradish. It may be pricier, but organic beef is one of the 20 foods you should always splurge on. 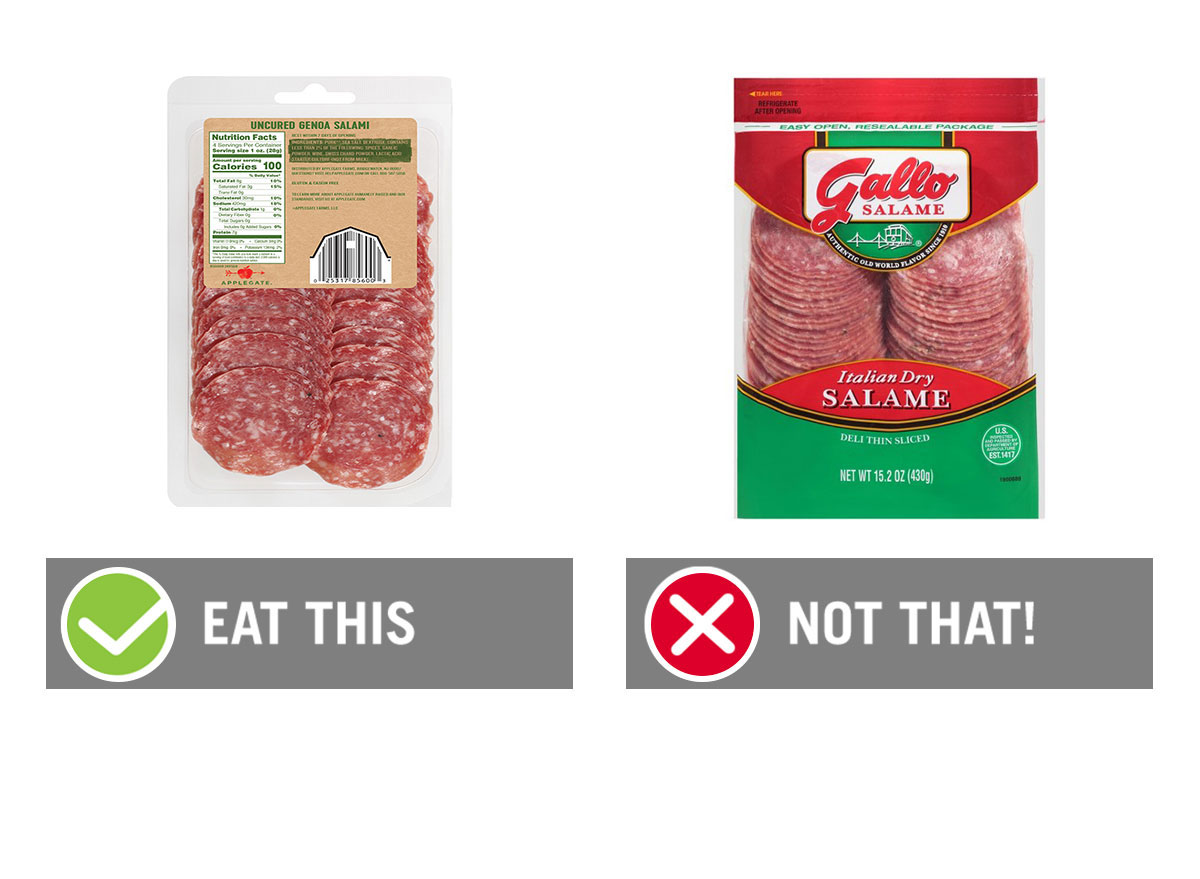 Not That: Gallo/Galileo Italian Dry Salame

It's salty, fatty, delicious, and a staple of every Italian sub. If you're going to indulge, do so with your better body goals in mind and pick up a package of Applegate Naturals' Genoa Salami. You'll get the same flavor from Gallo (called Galileo on the East Coast) but for fewer calories and grams of fat and with an extra gram of protein.

RELATED: The Best Sandwich in Every State 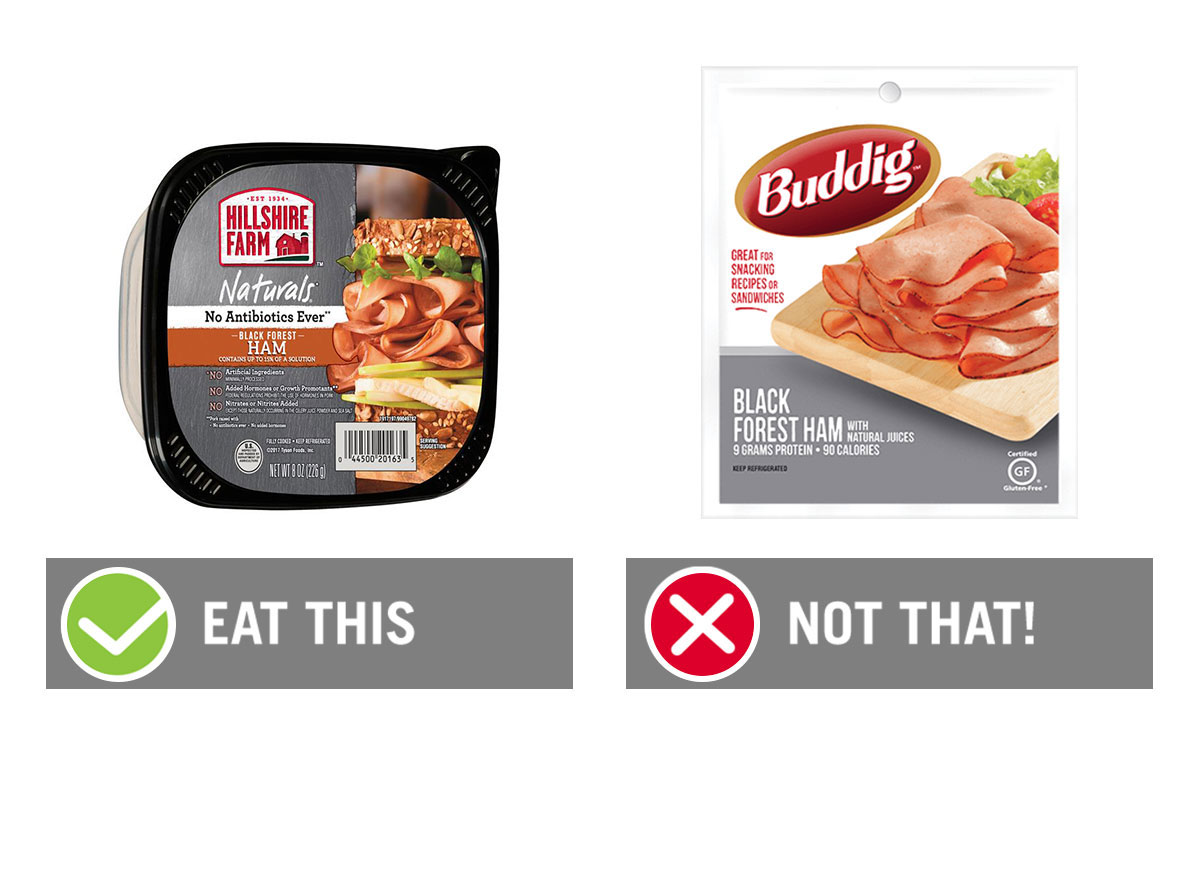 Most deli meats fail in one of two ways: too much fat or too much sodium. Buddig's products routinely fail in both ways compared to their peers. Not only in nutritionals, but also in ingredients, throwing in additives like caramel color and natural flavoring to give their products the appearance of looking good and tasting good. Hillshire Farm's Naturals line is made without any artificial nitrites—only getting them from celery juice powder—and let the meat speak for itself by eschewing any "natural flavors." If you're watching your sodium, we'd also recommend taking a look at Applegate Naturals, whose black forest ham rings are just shy of the 500-milligram mark at 470 milligrams.

Not That: Buddig Original Pastrami

Pastrami is usually a Not That! when it comes to those who are watching their sodium levels. That's because even the healthy options are full of the stuff. Saag's cold cuts win out compared to Buddig here because it has more than half the fat, fewer calories, and more muscle-building protein. Plus, it's made from Choice beef, one of the better cuts of meat (second tier) on the market. 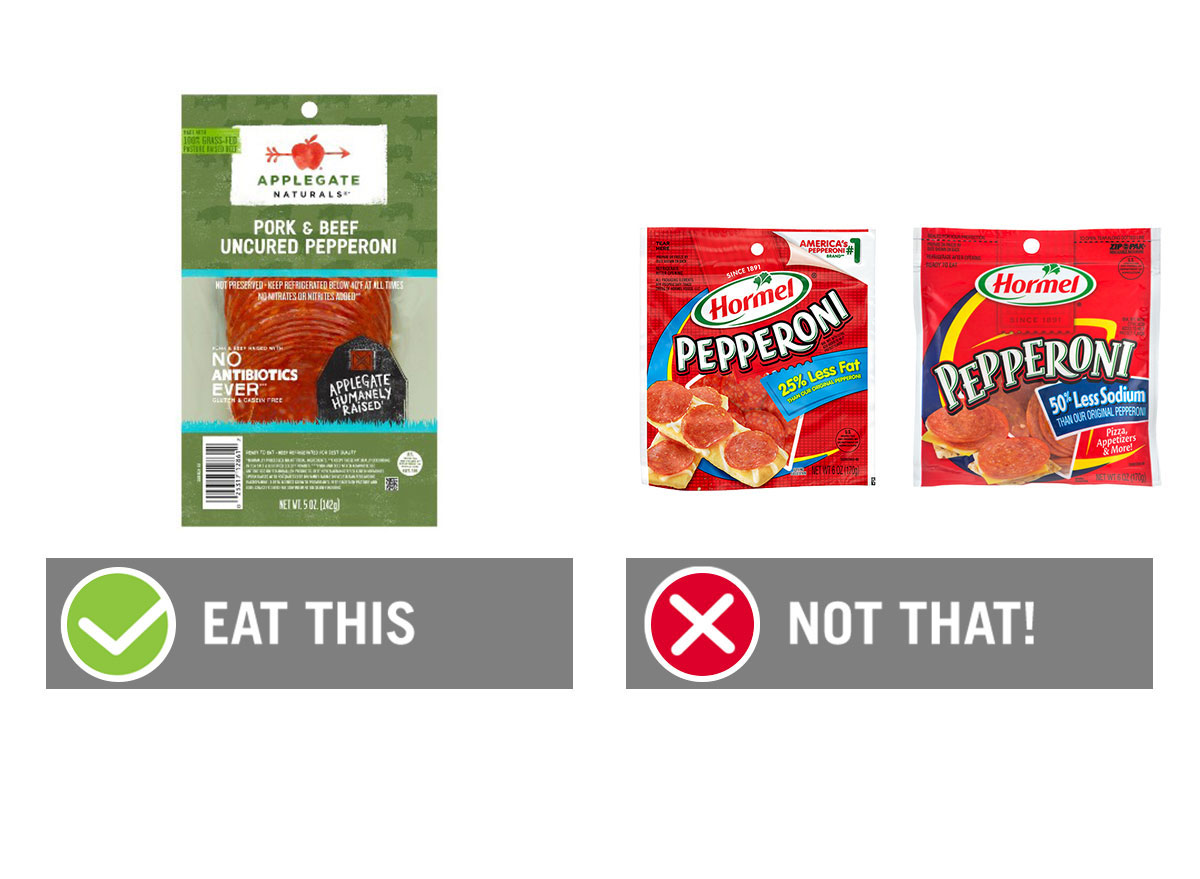 Not That: Hormel Pepperoni—25% Less Fat

Not That: Hormel Pepperoni—50% Less Sodium

Hormel serves up two foods that satisfy one of the weight-loss rules you can cheat on: low-sodium and low-fat foods are not always best for your body. In Hormel's case, the pepperoni with less fat is high in sodium and their less sodium option ramps up the fat count. You're better off with their original option, which is moderate on both counts, or just go for the best option: Applegate Naturals. While Applegate packs in more sodium than both of Hormel's picks, we chose it over the latter because it's made with omega-3-packed grass-fed meat and doesn't include added nitrites or BHA and BHT preservatives. 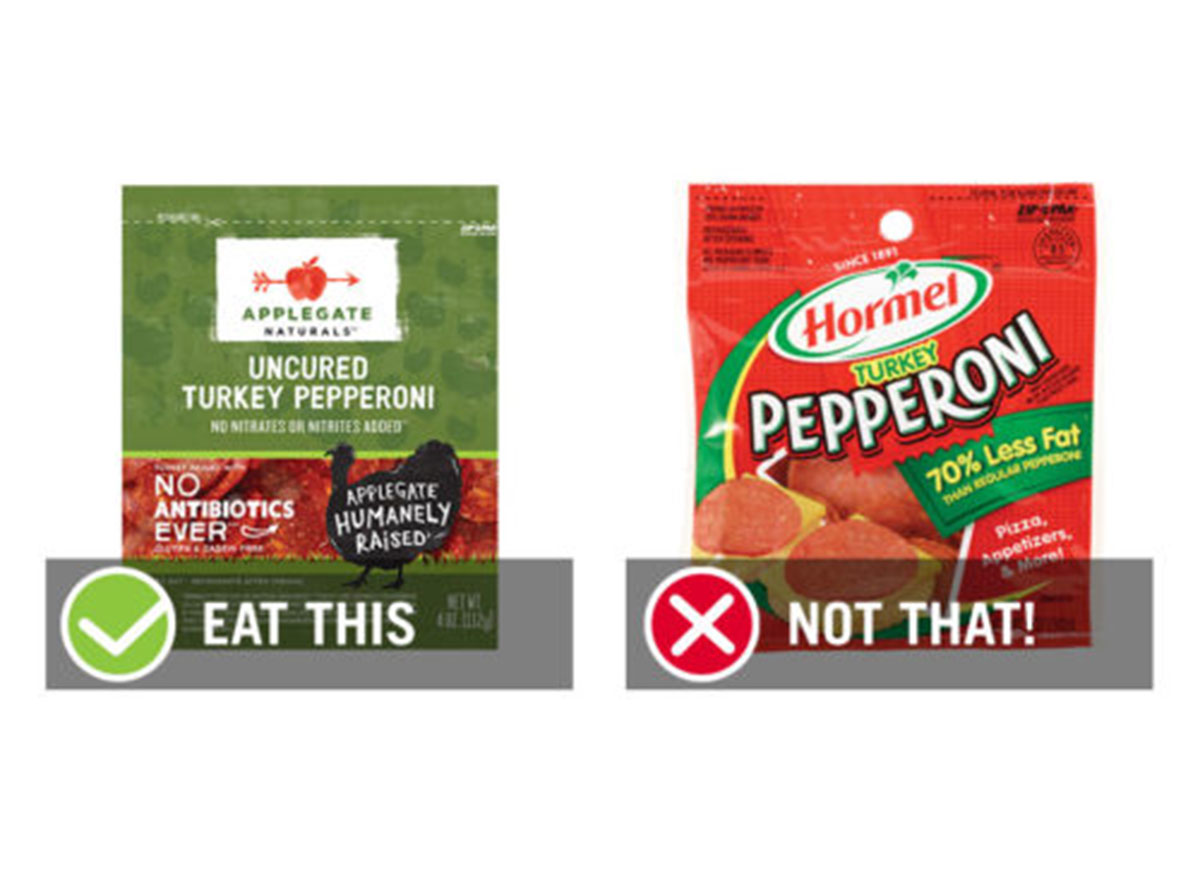 Not That: Hormel Turkey Pepperoni

Turkey pepperoni is going to be naturally lower in calories and fat compared to its pork counterpart, so we're looking for pizza toppers who have simple ingredients. Applegate's cold cuts win this round hands down, as Hormel uses carcinogen-containing BHA and BHT as preservatives, along with "flavoring," nitrite, and smoke flavor. Applegate sticks to celery powder for nitrites and even adds an extra layer of protection with rosemary extract. This ingredient acts as an antioxidant, which may help to limit the ability of nitrites to form cancer-causing nitrosamines under conditions of high temperatures. However, Applegate's turkey pepperoni is still high in sodium, so consume in moderation. 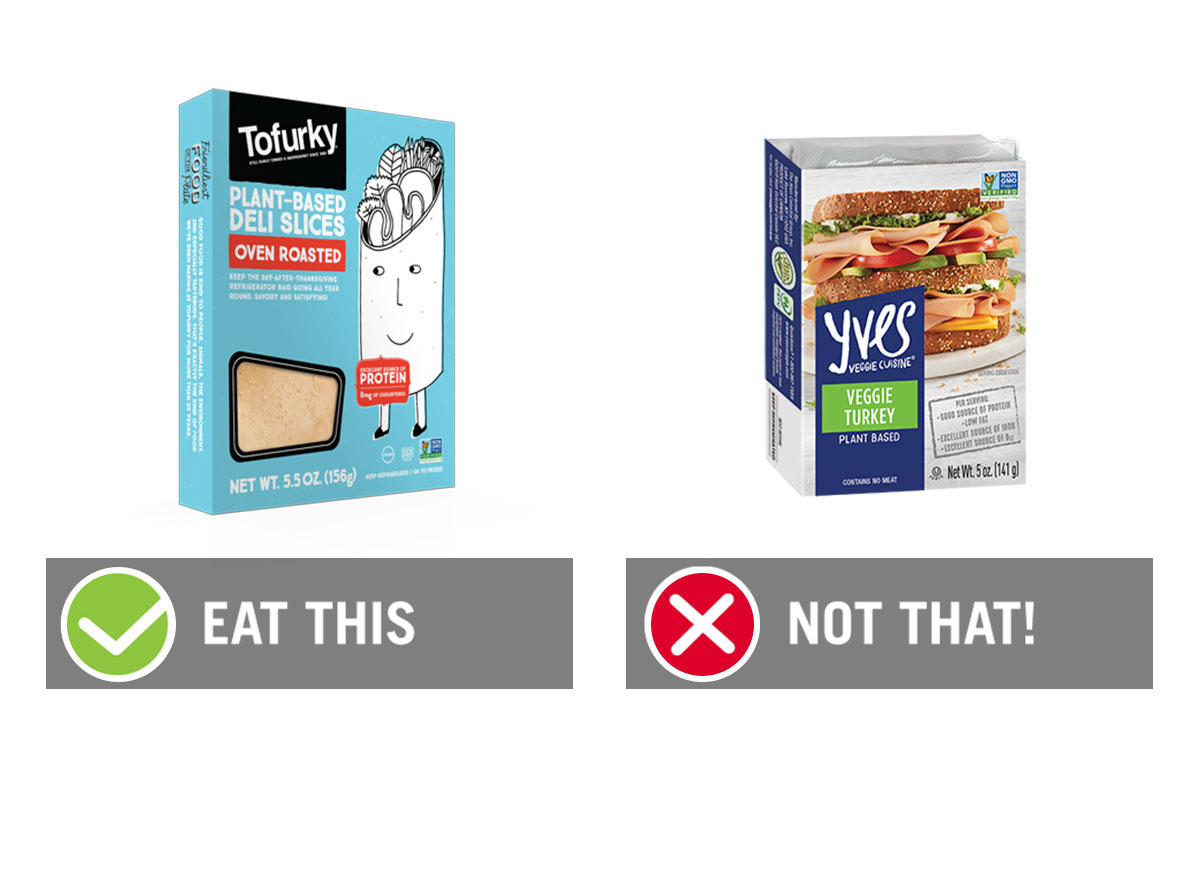 Both vegetarianism and vegan foods are skyrocketing in popularity right now thanks to the advocacy of the benefits of a plant-based diet, which range from fewer incidences of disease to better weight management. When considering what brand to buy, you want to look for one with the least amount of scary chemicals, and something that's low in carbs and sodium while being high in protein. Tofurky's cold cuts may be higher in sodium compared to Yves, but Yves chooses to include an ingredient we've advocated against eating: carrageenan. This additive has been connected to inflammation, ulcers, and other gastrointestinal problems. Plus, you'll get a gram of satiating fiber by choosing Tofurky.

Here are some more ideas for building a better lunch:

This Is the Best Time to Eat Lunch for Lasting Energy, Say Nutritionists