This innovative new plant-based product is versatile and delicious—and it was launched by a meat brand.

When it comes to naming the best new grocery store item of 2020, a number of factors come into consideration. The top product must showcase ingenuity, fit into a healthy diet, and (of course!) it must be packed with flavor.

That's exactly why the grocery store product that tops this year's list is—drum roll, please—KRAVE Plant-Based Jerky, which is similar in texture to the brand's classic meat cuts but made from fava beans and peas for a more nutritious and versatile snack. (Related: The 7 Healthiest Foods to Eat Right Now.)

KRAVE kicked off the year with its plant-based jerky in January. Since then, it's impressed both meat lovers and vegetarians with two mouthwatering flavors: Korean BBQ and Smoked Chipotle. 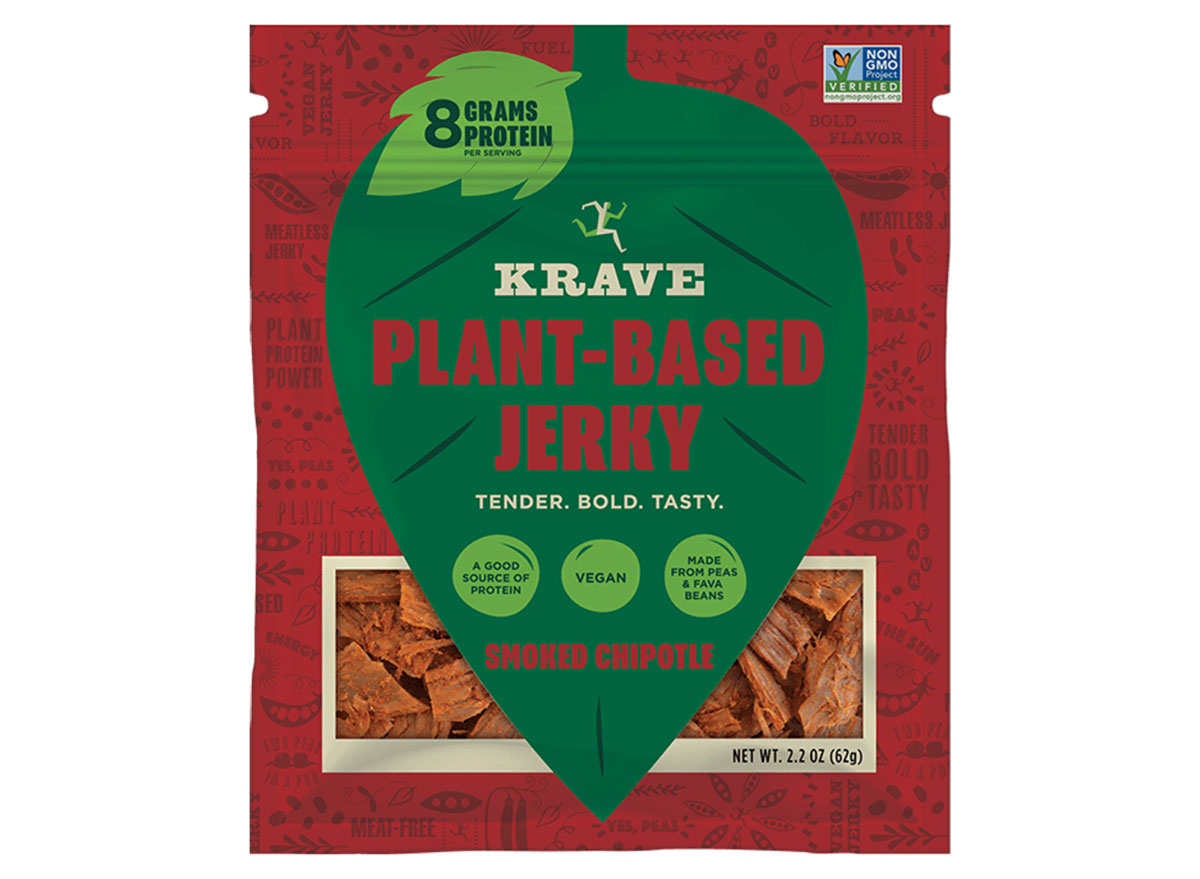 "I just tried it last week and I am obsessed," says Jessica Formicola, a professional food writer and recipe developer at Savory Experiments. "I am a full-fledged meat eater, and was skeptical about plant-based jerky, but I was blown away by how good it was. Satisfying and tasty, it is my new go-to snack while working—I've been through three bags in a week."

You might recognize KRAVE for its bold packaging and even bolder bites like Black Cherry Barbecue Pork Jerky and Chili Lime Beef Jerky. However, with its new plant-based jerky, the brand expanded this classic savory snack to reach those who either don't eat meat or who love jerky and want to occasionally sub in a meatless option. (Don't miss The Best and Worst Beef Jerky—Ranked!)

It also has the major bonus of squeezing in two grams of fiber, which is only found in plants. It may not sound like much, but every gram adds up: Kids and adults need at least 20 to 30 grams of fiber every day to stay healthy, but most Americans are only fitting in about 15 grams per day, according to the Harvard T.H. Chan School of Public Health.

"The Korean BBQ Plant-Based Jerky is lower in sodium and added sugar than KRAVE's other jerky, and it's also free of saturated fat," says Beth Stark, RDN, LDN, a retail dietitian, recipe developer, and culinary nutrition consultant based in Pennsylvania. "The Smoked Chipotle variety is a bit higher in sodium, yet also is lower in added sugar and has no saturated fat."

This plant-based jerky is also a good option if you're looking to occasionally replace processed, red meat in your diet. Processed meat is considered a carcinogen, or something that can cause cancer, by the International Agency for Research on Cancer (part of the World Health Organization).

People who ate red or processed meat four or more times weekly were 20% more likely to get colon cancer than those who consumed it less than twice a week, per an April 2019 study in the International Journal of Epidemiology. The risk of colon cancer increased by 19% for every 25-gram serving of processed meat.

Any meat—including jerky—that has been treated for flavor preservation through processes like salting, curing, smoking, and fermenting is a processed meat, says the American Cancer Society.

However, KRAVE plant-based jerky can scratch your itch for this classic snack in a new way.

"These snacks have a meat-like texture and are made with peas and fava beans that appeal to consumers seeking healthy, high-protein snacks," says Jennifer Onoja, category manager for salty and meat snacks at KeHE, a grocery distributor that carries KRAVE products. "Their multiple flavor profiles, Smoked Chipotle and Korean BBQ, appeal to classic jerky consumers and elicit the same palate and texture response as animal-derived meat snacks."

KRAVE products are found nationwide at select natural and conventional grocers and on Amazon. One 2-ounce bag of KRAVE plant-based jerky has a retail price of $5.99.

"I'm one of those people who appreciates how satisfying a good jerky snack can be, but I also thoroughly hate how expensive they often are," says Julie Ramhold, consumer analyst with DealNews.com. "KRAVE bills itself as a premium snack, but the prices don't necessarily reflect that."

For more, be sure to sign up for our newsletter to stay on top of all grocery news and new food product launches.