The Best and Worst Beef Jerky—Ranked!

Most of us know jerky as a gas station junk food loaded with tons of sodium, nitrites, MSG and ingredients that look like they'd be found in a chemistry lab.

By Olivia Tarantino
This post contains affiliate links. If you use these links to buy something, we may earn a commission.

Most of us know jerky as a gas station junk food loaded with tons of sodium, nitrites, MSG, and ingredients that look like they'd be found in a chemistry lab.

But there's no reason jerky should only be a gas station snack. When you need metabolism-revving, hunger-satisfying protein after a workout—or just a healthy snack on the road—beef jerky is a great go-to. The drying process is beneficial in two ways: it requires getting rid of excess fat (as it could go bad without refrigeration) so you're left with a low-fat product, and the water lost concentrates the protein in the meat to nearly double its amount in the same portion of uncured meat.

As the all-natural, grass-fed beef trend converges with the emerging artisanal product market, athletes, and health-conscious snackers are turning to jerky as a satiating alternative to munchies like chips or bars without being restricted to additive-laden gas station products. And there's a whole host of new-age jerky brands that will satisfy all your high-protein, low-carb snacking needs.

To separate themselves from the jerkies of the past, many new brands claim they don't contain some of the worst food additives like added nitrites, but that doesn't necessarily mean the jerky is nitrite-free.

Cured meats contain sodium nitrites to make the meat look appealing, preserve it, and keep it free of harmful bacteria. Natural sources like celery powder can also be used and still allow a product to claim "All Natural" as well as "No Nitrites Added." Lisa Moskovitz, RD, CDN, explains, "Whether it's the synthetic version or from celery powder, it's basically the same thing." She also explained there's still no verdict on whether nitrites are harmful or safe. In this case, we prefer the undebated alternative: instead of chemical or naturally-occurring nitrites, jerky can simply be cured with just salt and vinegar.

How did we pick the best jerky brands?

When we looked at nutritionals, there were five main things we kept in mind: sodium, sugar, protein, beef source, and ingredients. 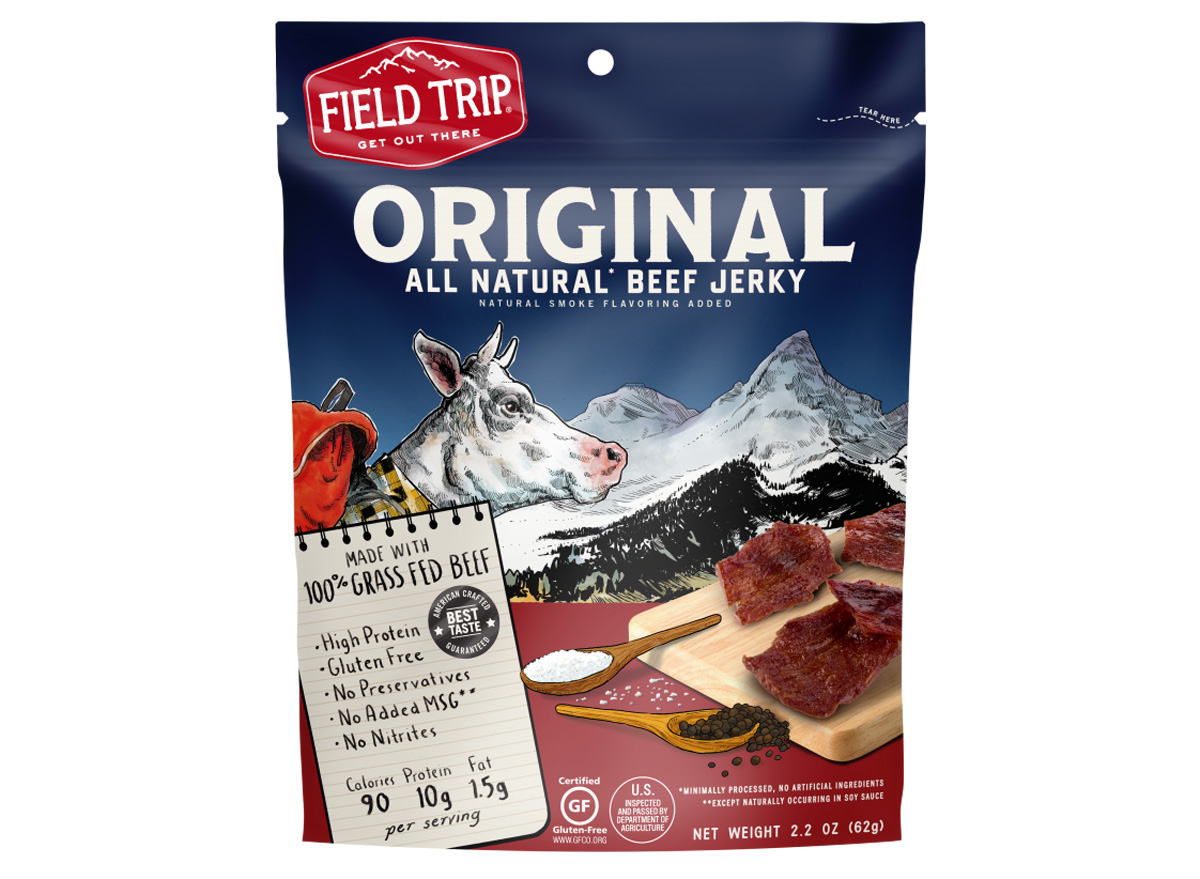 Field Trip was founded by three guys who were fed up with the fact that fitness programs claimed beef jerky was a good snack, but the only options were those with processed meats and chemicals. The result is a high protein beef jerky of the bunch made from 100% grass-fed American beef, no preservatives, no artificial ingredients, and no MSG. They even use creative ways to sweeten the meat, like using pineapple juice and apple juice rather than used refined sugars like high fructose corn syrup. If you need a completely nitrite-free pick (both synthetic and celery powder), Field Trip's line of four beef jerky flavors should be your go-to. 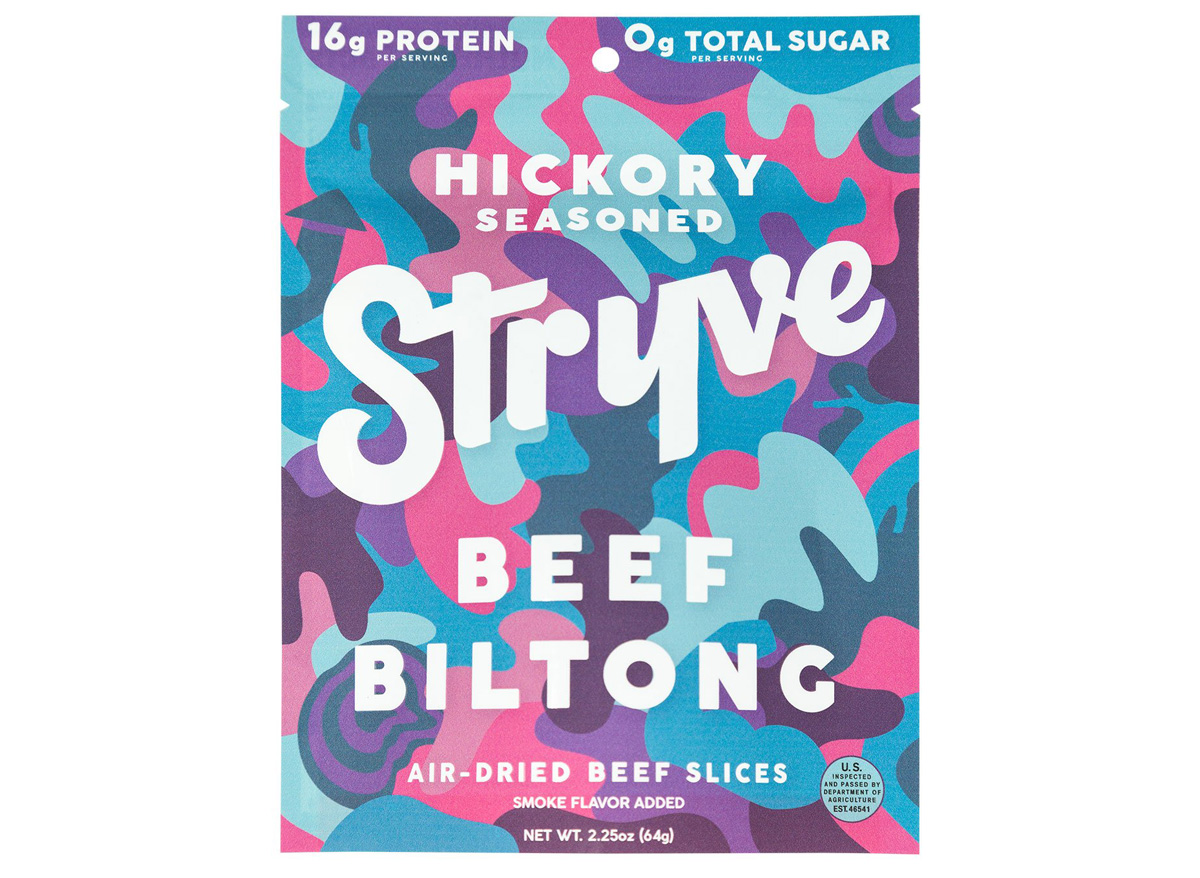 Say hello to your new favorite high-protein, zero-sugar snack. Never have we tasted such a pure, unadulterated dried beef snack than before we tried Stryve. Despite this biltong being the thinner, smaller cousin of jerky, don't let that fool you—each bite is still packed with flavor. If you're a fan of serious heat, you should definitely try their Peri-Peri flavor (it's not for the faint of heart). And if you want the snappiest beef jerky stick you've ever had, we can't recommend their Hatch Green Chili flavor enough. Regardless of your pick, you should definitely place more than one order—you'll thank us later. 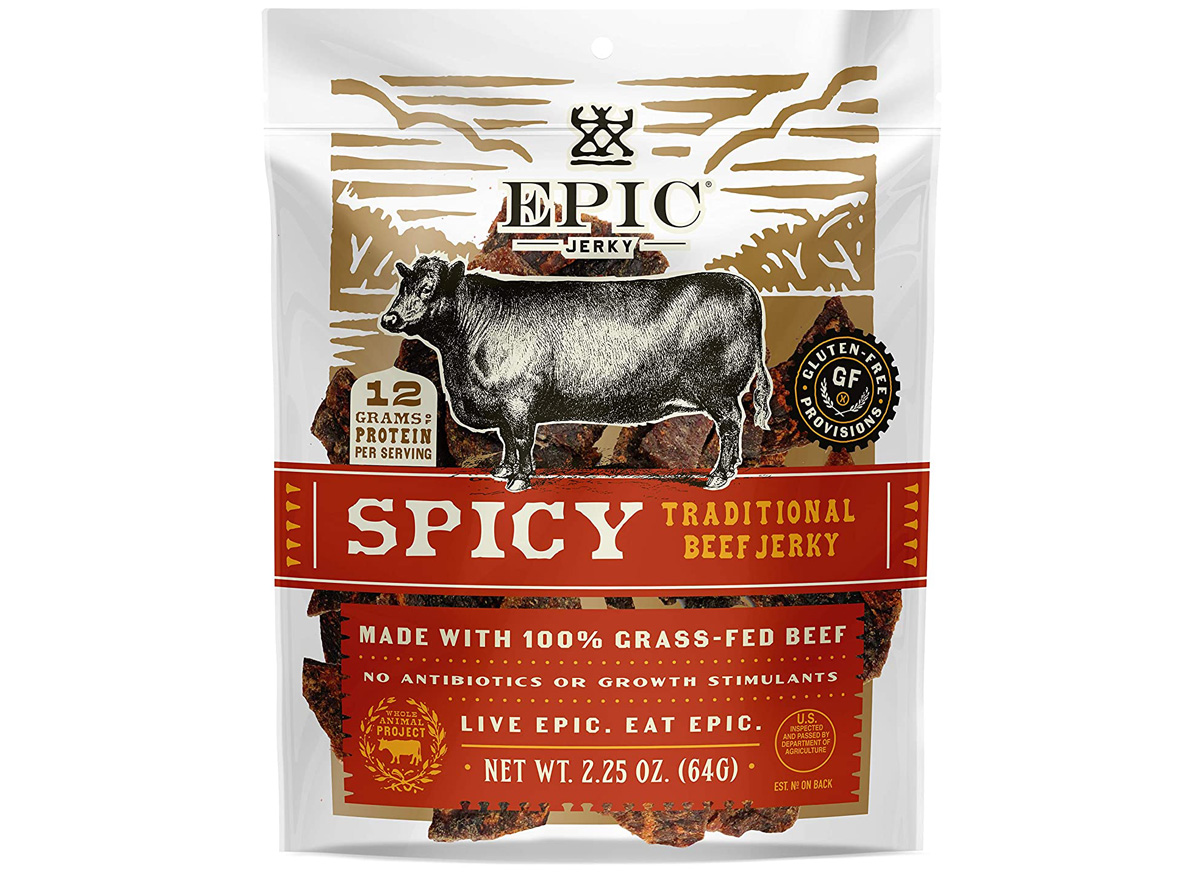 Epic—purveyors of the finest meat snacks in all the land—makes a traditional jerky that checks off a ton of boxes. It's low in sugar (just 4 grams), low-sodium (280 milligrams), high in protein (12 grams), has no nitrites (not even celery powder), is gluten-free, is made with 100% grass-fed beef, and is paleo friendly. It doesn't get much better than that. 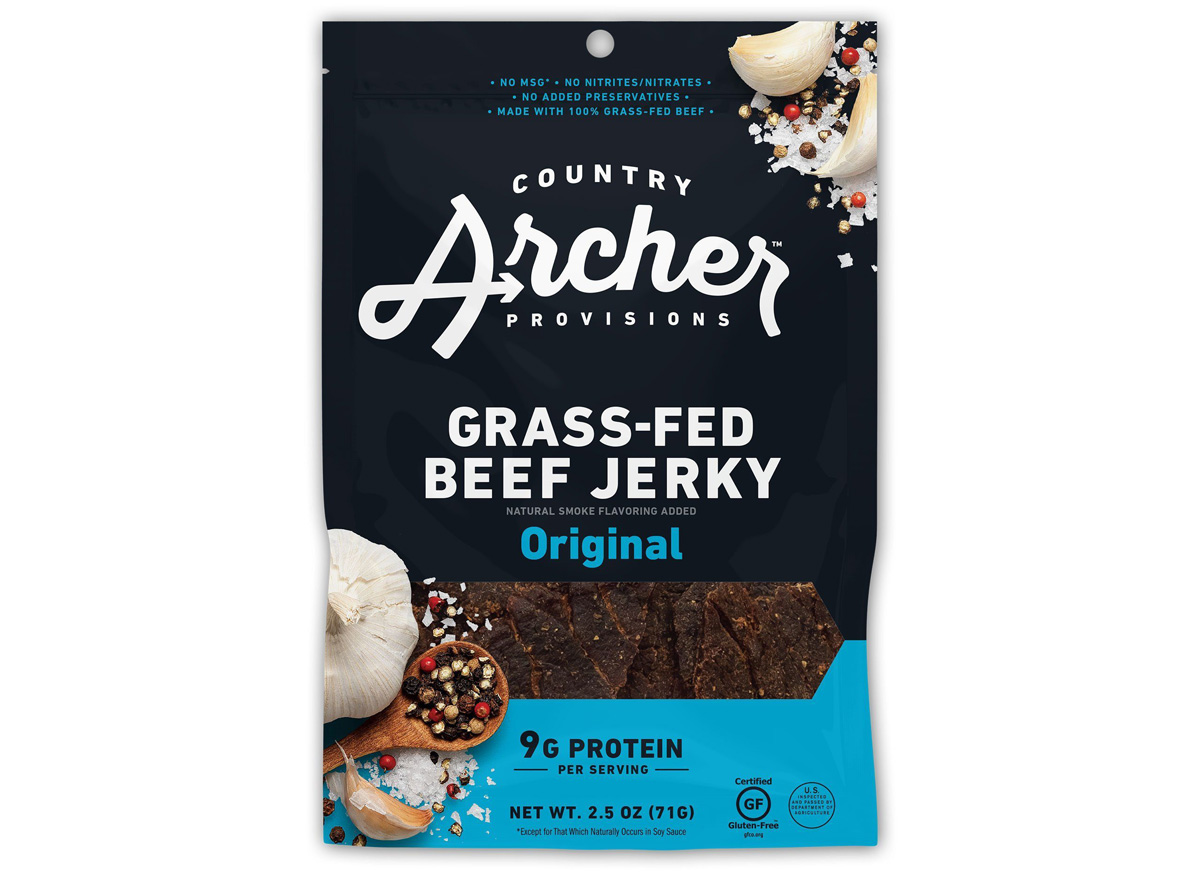 We love Country Archer's commitment to artisinal, hand-crafted jerky. It ensures that each bag is made with the best ingredients, like 100% grass-fed beef, and not health-harming preservatives or artificial additives. If you're gluten-free, you probably realize how difficult it is to find a pack of jerky that isn't made with soy sauce. Luckily, Country Archer's original flavor is completely gluten-free thanks to using tamari instead of soy sauce. Like Field Trip, Country Archer eschews nitrites and nitrites of every kind—both artificial and natural. 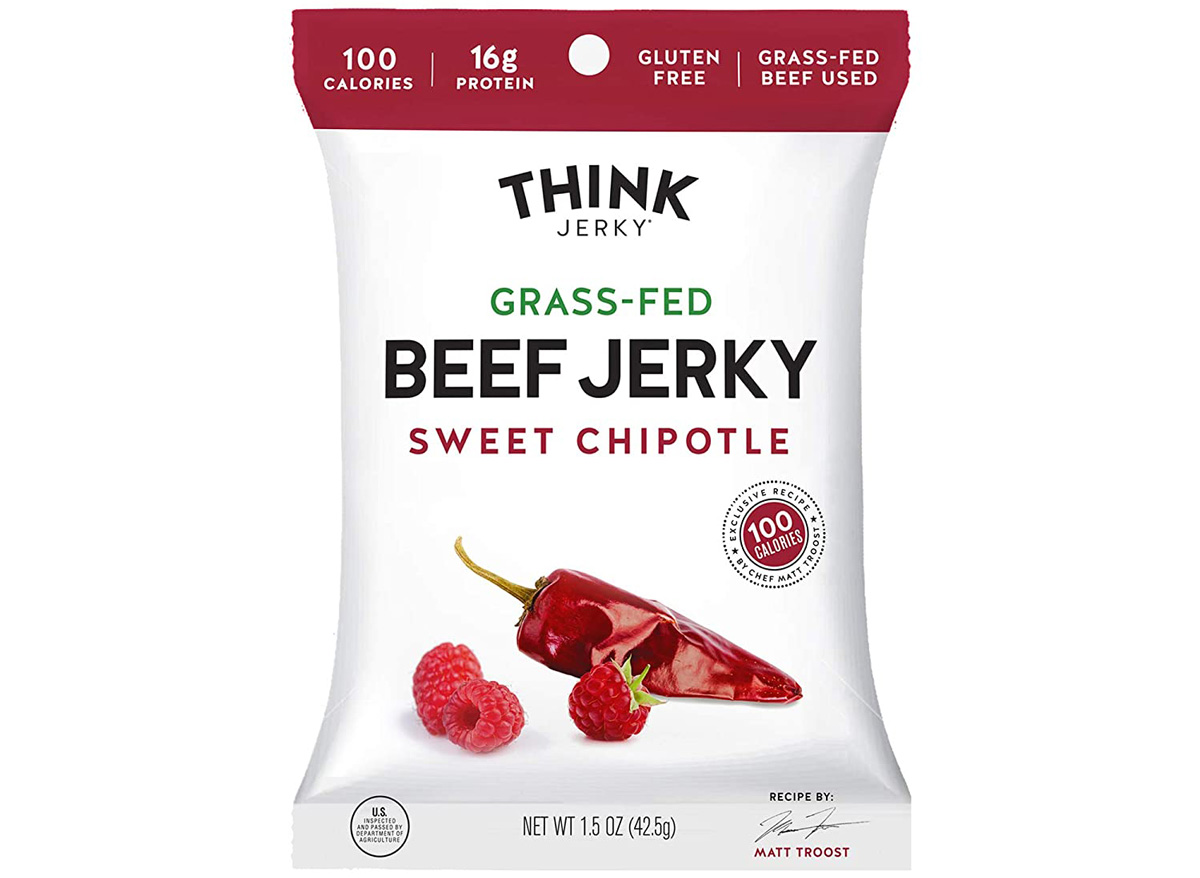 There's more protein in this bag compared to other jerkies on this list, but there are also fewer ingredients. Think Jerky makes their chef-crafted dried meats with the fewest, natural ingredients they can. Tthe six ingredients that make up this bag are 100% grass-fed beef, raspberry juice, salt, sugar, water, and spices.

Yes, this jerky is high in protein and low in fat, but we're calling Chef's Cut's bluff when they claim they use "only the finest real ingredients—just like you would find at your favorite steakhouse." We're not sure you'd find hydrolyzed corn and soy protein (MSG) or caramel color—which can carry a possible carcinogen, 4-methylimidazole (4-MEI), that forms during the manufacturing of some kinds of caramel color—at your steakhouse or your kitchen. And if you're steering clear of nitrites, heads up. This jerky contains nitrite-containing celery powder. 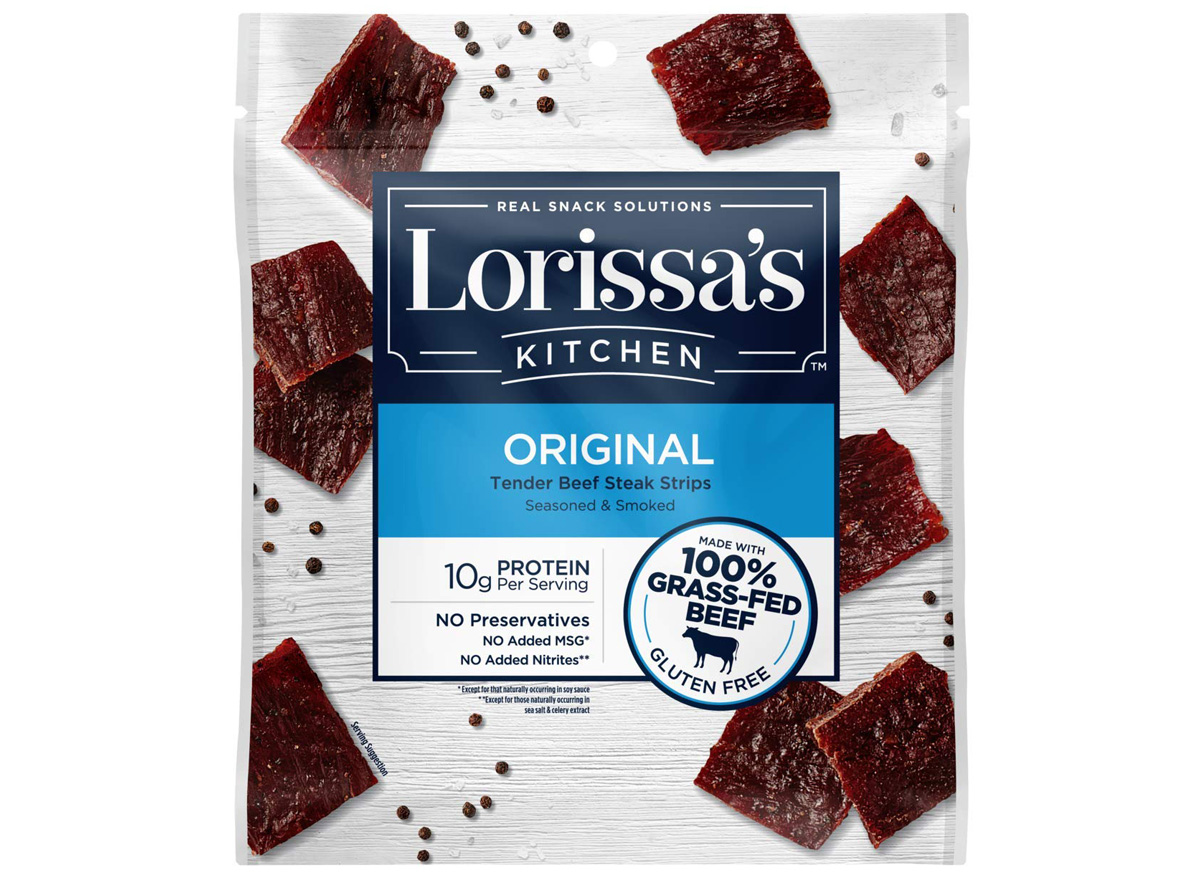 For perfectly-portioned, tender jerky (not that excessively chewy stuff), grab a bag of Lorissa's. These steak strips are made from 100% grass-fed beef and are seasoned with soy sauce and garlic; smoked; and sweetened with cane sugar and pineapple powder. 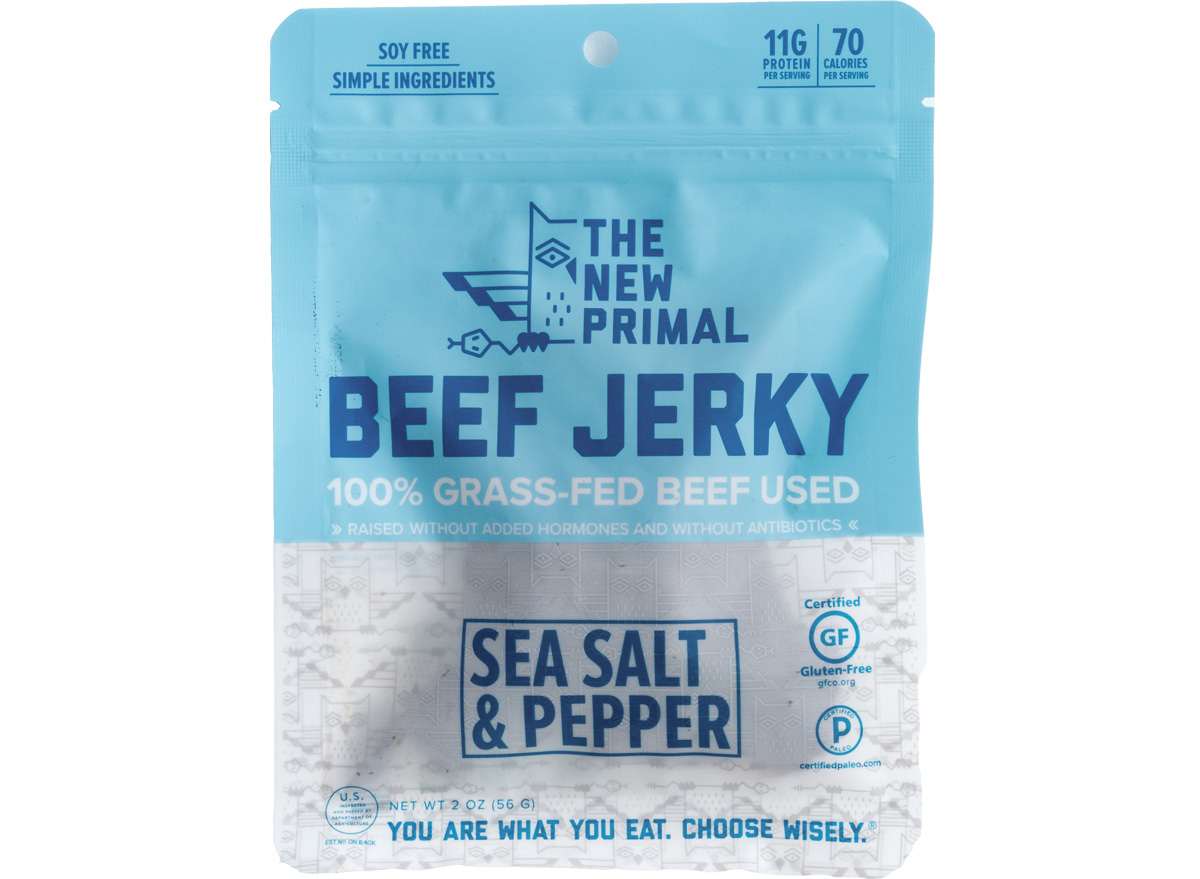 Low in sodium and sugar, and packed with protein, this grass-fed beef jerky is a keto dieter's dream. Grass-fed beef is rich in healthy omega-3s and CLA. CLA, or conjugated linoleic acid, isn't as present in grain-fed cattle because the CLA comes directly from the grass. This fatty acid contains a group of chemicals that provide a wide variety of health benefits, including improved blood sugar regulation, maintenance of lean body mass and reduced body fat. 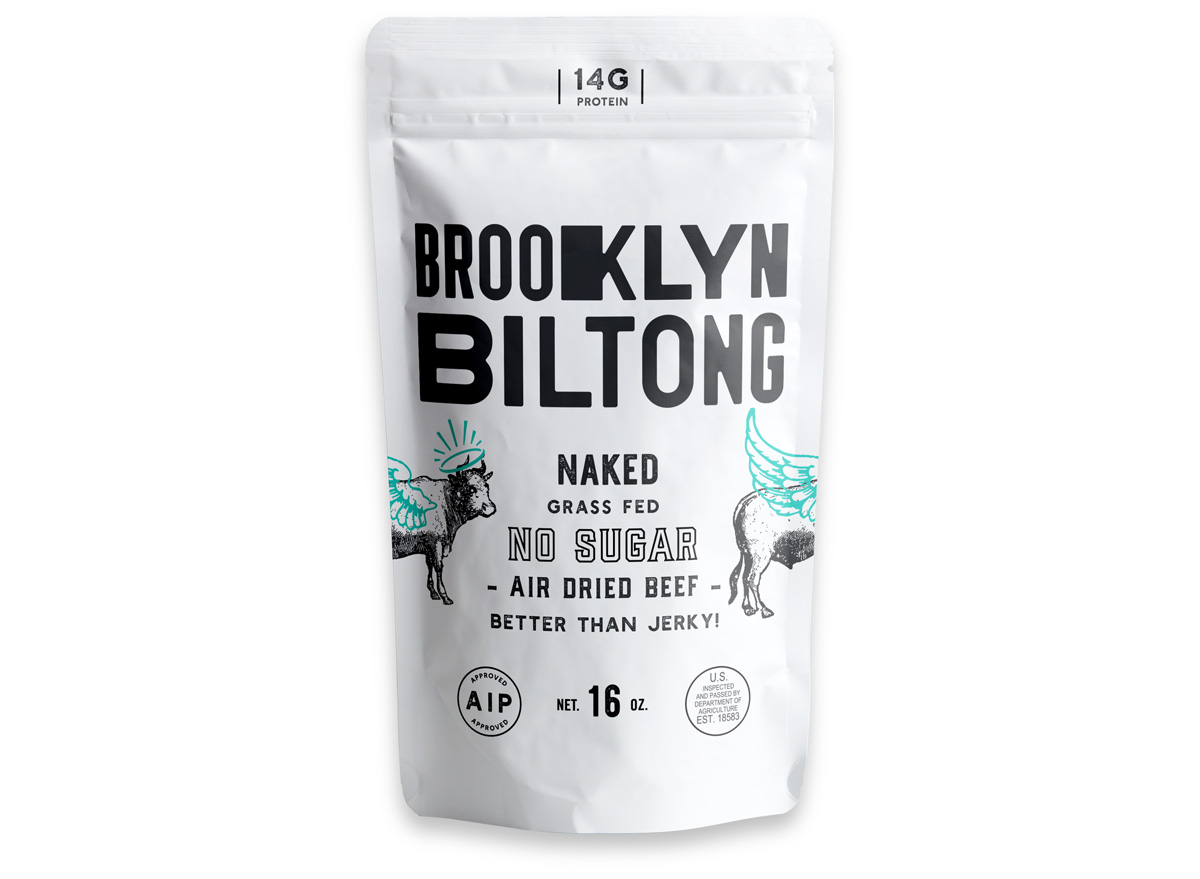 Biltong is a jerky that has a specific recipe: It's dipped in a vinegar marinade, sprinkled with coriander and other spices, and then air-dried for 3-6 days. The process is just as simple as its ingredients, resulting in a piece of beef that's more tender than jerky and certainly very healthy. This naked flavor is AIP (paleo autoimmune protocol) approved.

The unhealthiest store-bought jerky brands you can buy 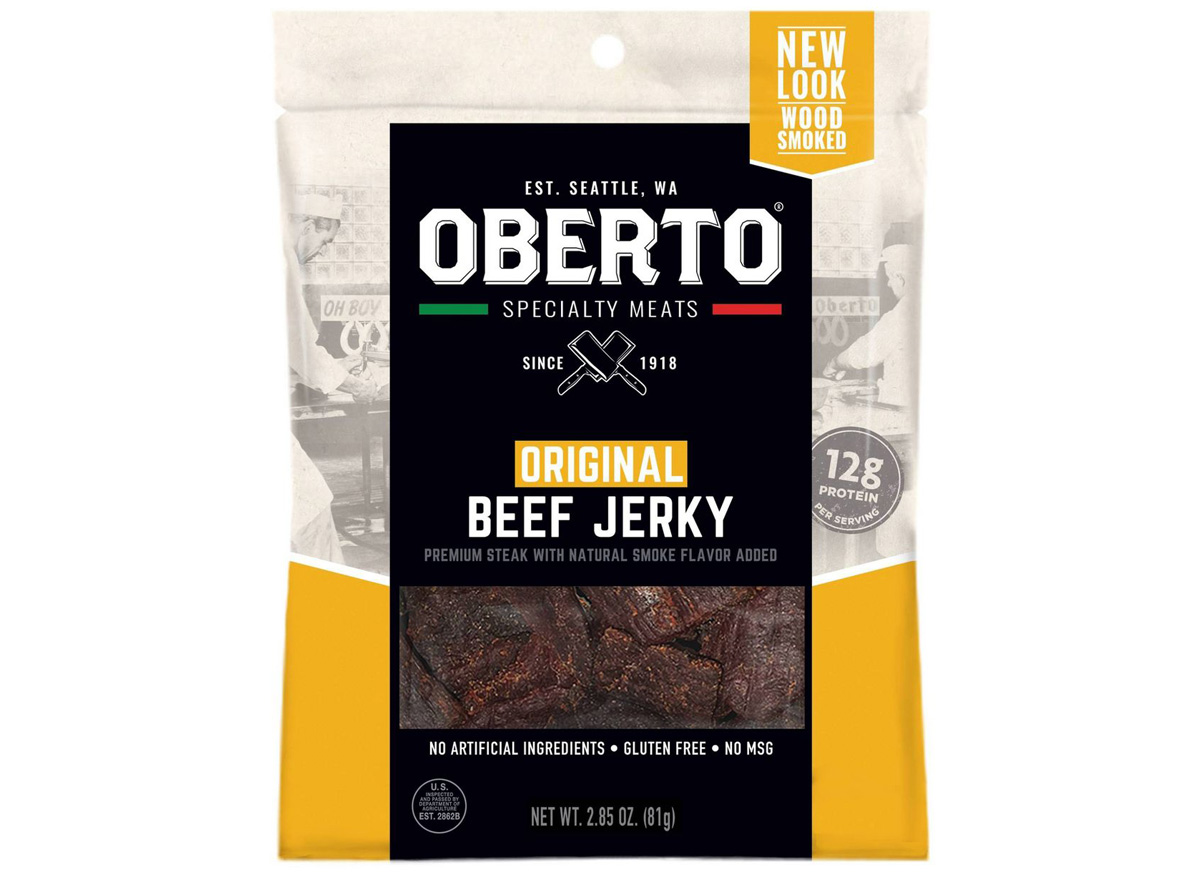 It's a fairly simple ingredient list for one of the largest name brand jerkies, but we're not completely sold. Oberto landed a spot on our list of worst jerky brands for its high sodium levels and conventional beef. 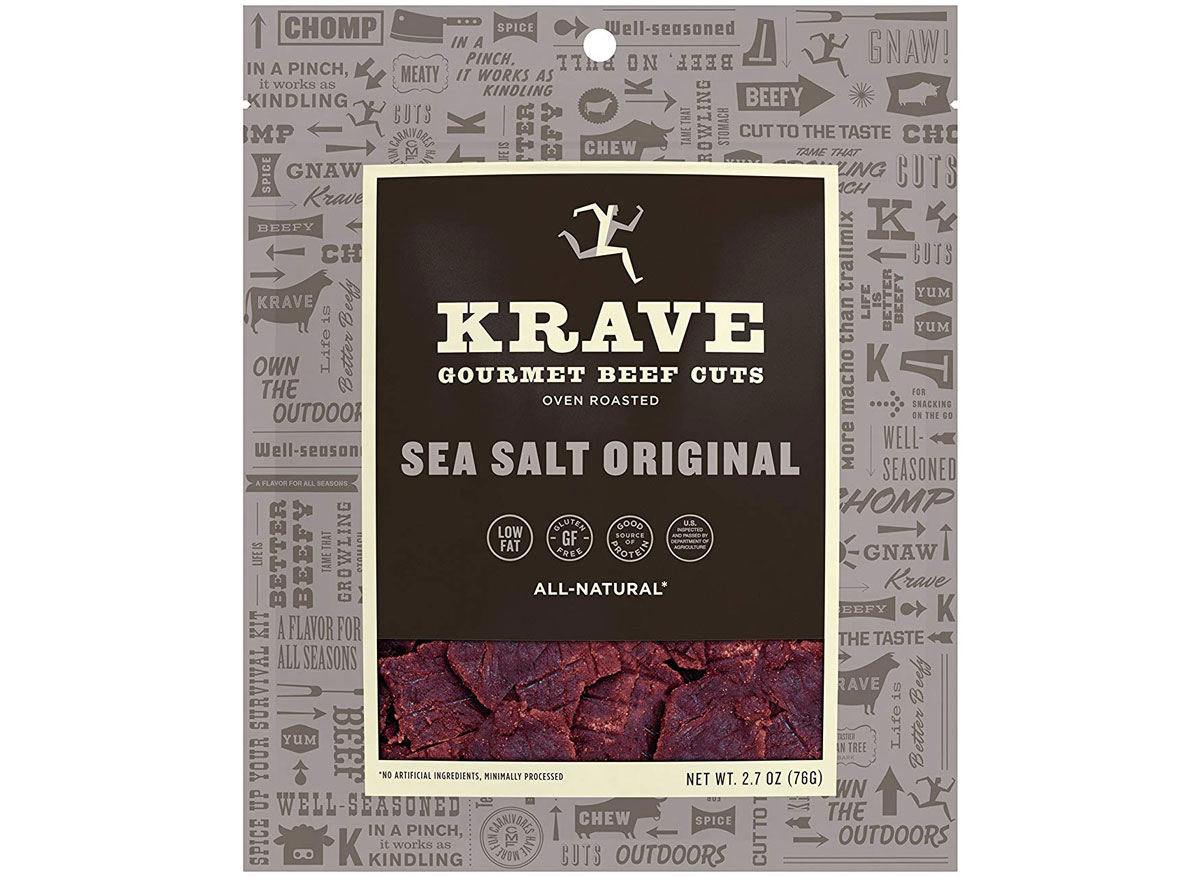 Yes, Krave's jerky is made with an impressive list of all-natural, minimally-processed ingredients, but this tiny one-ounce serving has a whopping 10 grams of sugar in it while having a measly 8 grams of protein. A third of every gram of jerky is sugar. For comparison, a fifth of each gram of a glazed Krispy Kreme donut is sugar. 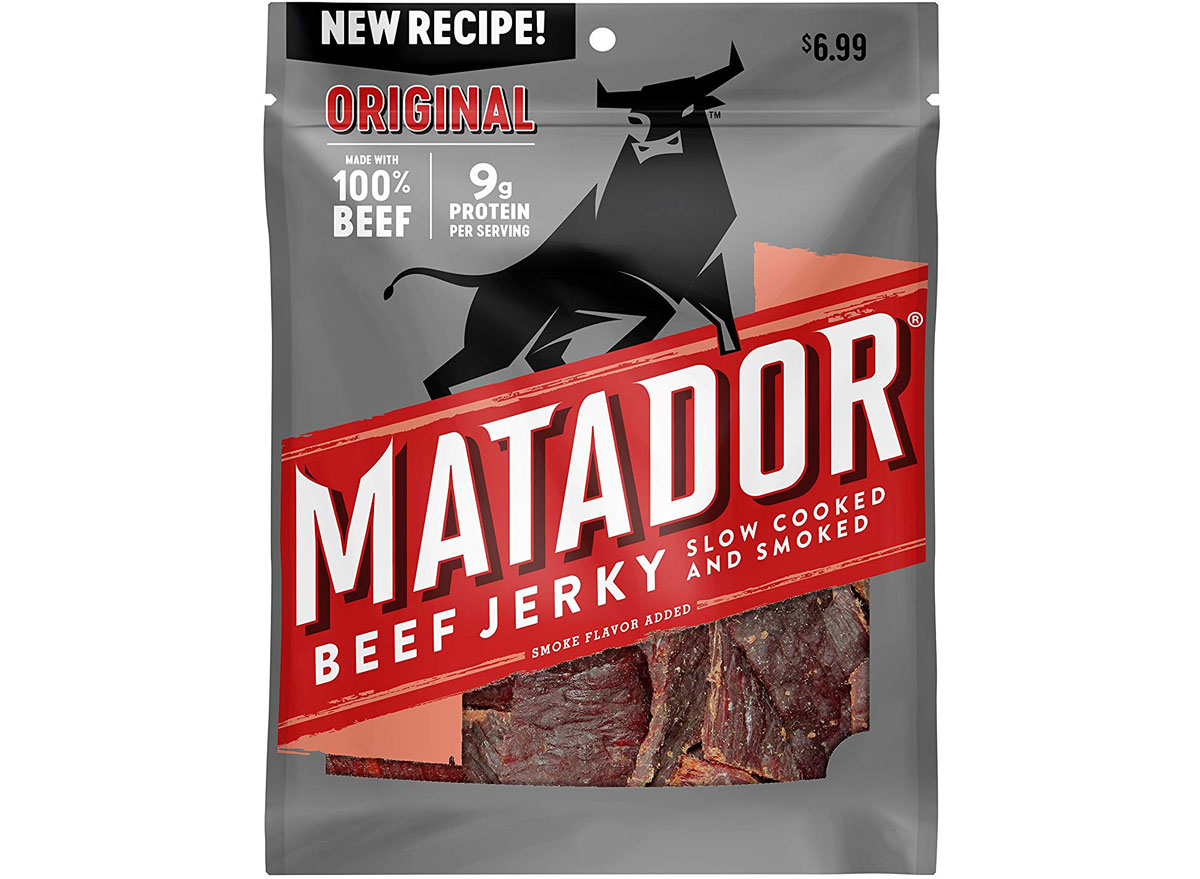 This Matador certainly raises some red flags (pun intended). Matador jerky has some of the highest sodium levels we've ever seen. That 710 milligrams of blood-pressure-raising sodium is more than four times what you'd find in the same size serving of chips. It's also one of the few brands that uses MSG and purified nitrites.