10 Best Things to Eat When You're Starving

When you're really hungry, time is of the essence — and that's when long-lasting dietary mistakes are made.

You might be tempted to reach for whatever's at hand, hit the vending machine, or gobble leftovers, no matter how sugary or indulgent. But you can plan for your next spontaneous attack of the munchies by stocking up on snacks which will fill you up fast and provide quick energy while slimming your waistline long term. Here are 10 of the best. And don't miss our exclusive report, The 50 Best Weight-Loss Tips of All Time!

The quick-pick-you-up is packed with satiating protein to fill you up now and shut down further cravings. A Blue Diamond 100-calorie snack pack contains 4 grams. Bonus: Almonds are weight-loss magic bullets, thanks to the amino acid L-arginine, which helps build lean muscle and, according to Mayo Clinic researchers, reduces belly fat.

The hunger-busting ingredient in nature's perfectly portable snack is fiber. Each medium banana contains 3 grams of fill-you-up fiber, along with 14 grams of naturally occuring sugar for energy and just 105 calories. Additionally, the fruit's famed potassium aids muscle health and recovery. 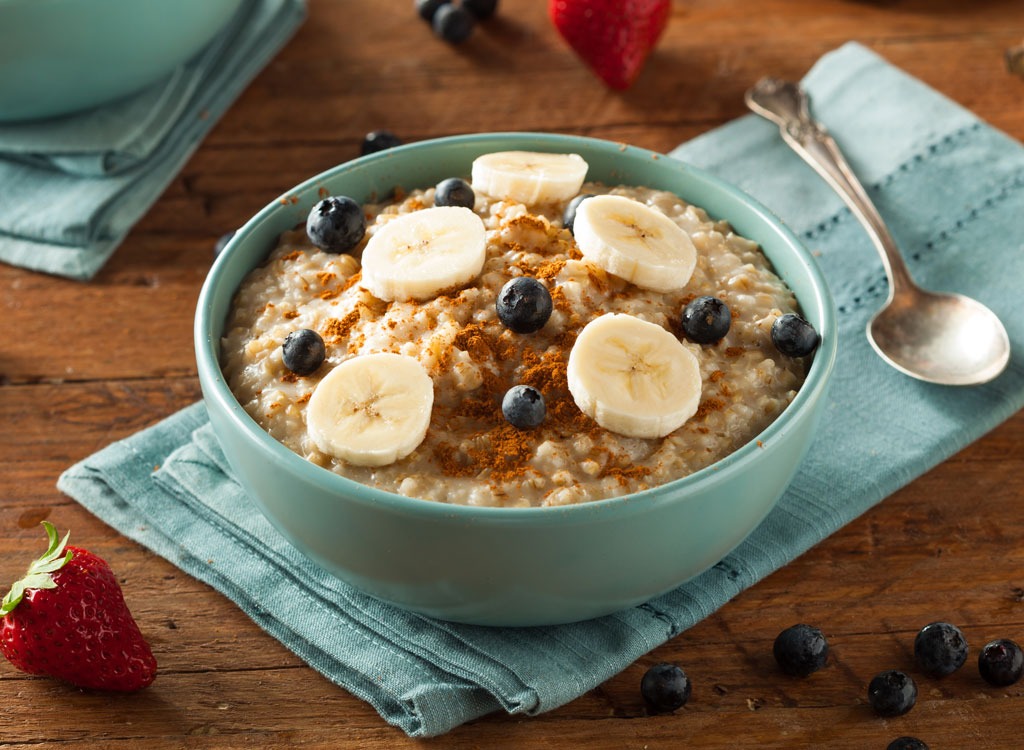 When hunger pangs strike, it's tempting to reach for a cereal box. Resist. According to research published in the Journal of the American College of Nutrition, eating oatmeal results in greater feelings of satiety than cold breakfast cereal. Why? The belly-filling power of insoluble fiber. In one Canadian study, researchers discovered that those whose diets were supplemented with insoluble fiber had lower levels of the hunger-inducing hormone ghrelin.

Reaching for this naturally sweet snack will not only leave you full and naturally energized; it'll help you beat back belly fat too. A compound called ursolic acid—found in apple peels—is believed to increase muscle and brown fat, a good fat that ratchets up calorie burn. 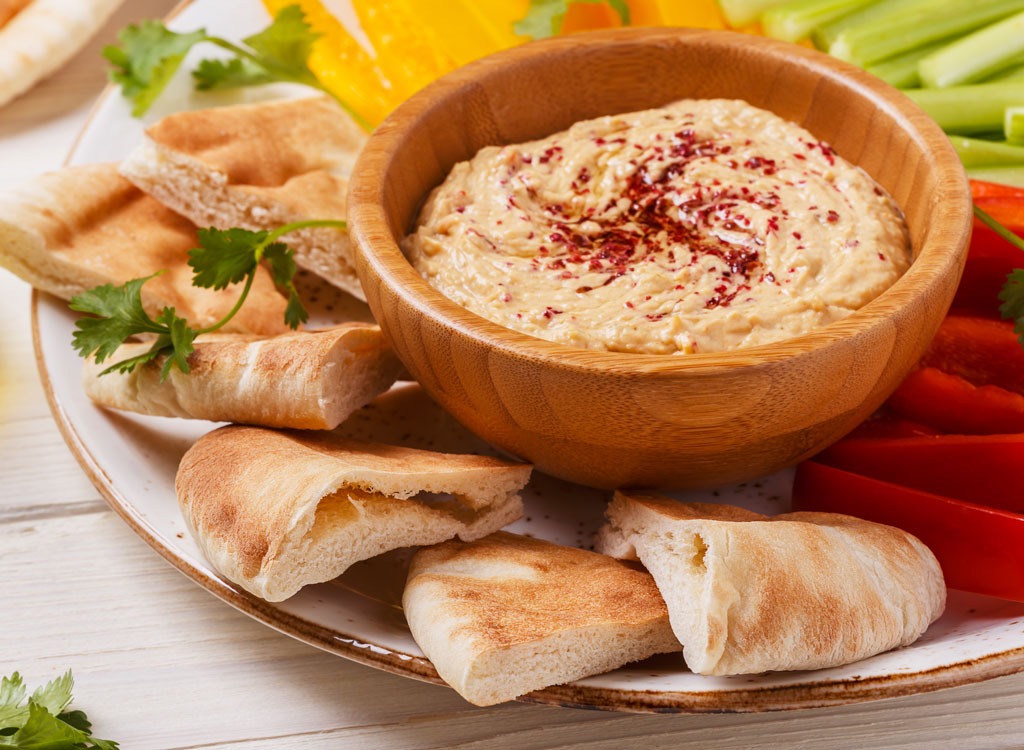 Chickpea hummus is not only packed with satiating protein but having the Mediterranean dip stocked in your pantry also give you an excuse to eat more filling, fiber-rich vegetables. Legumes—which also includes beans, lentils, and peas—have been found to be some powerful appetite suppressors. A recent review, published in the journal Obesity, discovered that subjects who consumed ¾ to 1 cup of legumes daily felt as much as 31 percent fuller than those who abstained.

This savory, satisfying snack will keep you full, thanks to its store of good monounsaturated fat. Have some will whole-grain crackers (avoid simple white-flour breads and crackers) or add a schmear to a banana. Just make sure the brand you choose has only two ingredients: Nuts and a touch of salt.

When you're really hungry, kick lowfat and nonfat yogurts to the curb — they'll often leave you searching for more food. Full-fat dairy is digested slowly, keeping you fuller longer. Greek yogurt packs a one-two punch when it comes to beating hunger pangs: it packs more than 20 grams of satiating protein and a whopping 20 percent of your daily calcium needs. Without enough calcium in your body, you're more likely to experience anxiety and depression—which can increase cortisol and hunger hormone levels.

Don't worry—eating fat won't always make you fat. Avocados are packed with heart-healthy monounsaturated fats, like those found in olive oil and nuts, that dim your hunger switches and ward off the munchies: a study in Nutrition Journal found that participants who ate half a fresh avocado with lunch reported a 40 percent decreased desire to eat for hours afterward. And unsaturated fats can also prevent the storage of belly fat. It's a win-win, as the more belly fat we have, the harder it is to control our appetite, according to a new study from the University of Florida.

They might be small, but raspberries are a mighty hunger fighter. A recent small study in the journal Appetite found that young women who consumed a mere 65-calorie cup of berries ate about 20 percent fewer calories an hour later than women who ate the same number of calories in candy. Translation: Eating berries won't just quell your cravings, they'll ward off overeating, too. That's because just a cup of raspberries provides 8 grams of satiating fiber.

Smoothies and juices might be all the rage right now, but if you've ever had a meal-replacement drink and been hungry almost immediately after, here's why: Your body doesn't register liquid calories the same way as it does with solids. In fact, energy obtained from fluids has been shown to be less satisfying than calories from solid foods, so we'll tend to drink more before we feel satisfied, according to a study in the American Journal of Clinical Nutrition. Experts hypothesize that the physical act of chewing can increase physiological satiety responses—one recent study in Food Quality and Preference attributed the satiety signal with the fact that hearing the crunch of food can serve as a way to monitor your consumption—or that whole foods are more slowly digested than liquids, a process known as gastric emptying, causing your stomach to actually feel fuller, longer.