We Tested 12 Yogurts, And This Is The Best!

Discover which get the boot for being disastrous desserts and which we deemed fermented fuel.

On a mission to get back to her college weight, my friend Donna licked her spoon and gushed, "This strawberry yogurt tastes just like ice cream!"

Little did she know, it might as well be.

A heartbreaking chunk of yogurt brands out there claim to be healthy and satiating; meanwhile they're tainted with enough sugar to qualify as a belly-ballooning dessert. But if you skip the tubs spiked with the sweet stuff, yogurt can be a wonderful appetite-quelling snack that nourishes your body with probiotics and aids in muscle recovery thanks to its solid protein punch.

To help you decrypt the nutritionals and crack the which-is-the-best-yogurt code, I tested 12 different types of plain and vanilla-flavored yogurts spanning some of the most popular brands and evaluated them based on Nutrition, Clean Ingredients, Appearance & Consistency, and Taste. Stay tuned for Eat This, Not That!'s top pick.

Here are the four metrics we used to determine each yogurt's final grade.

The dairy treat has a handful of perks: protein, healthy fats, probiotics, vitamin D, and calcium. But keep in mind, these uniquely yogurt benefits shouldn't be blemished by loads of sugar.

This fat-frying high-protein snack won't be doing you much good if it's brimming with sweeteners, preservatives, and other odd additives.

Yogurt should be cold and creamy, and sans curdles… that's what cottage cheese is for.

If it passed a sniff test but still managed to disgust your tongue, that tub is better off in the trash! 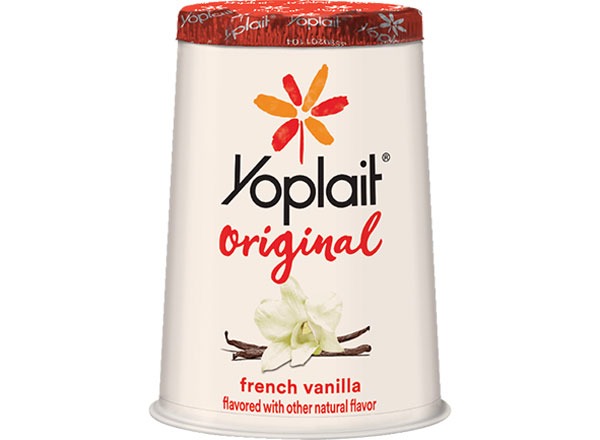 Taste: Yoplait's french vanilla yogurt tasted nothing like real vanilla and was nauseatingly sweet—which was expected given the whopping 18 grams of sugar.

Yoplait believes that "you can't beat an original," but in this case, we beg to differ. Although the brand reduced its sugar content by eight grams, this six-ounce container still managed to pack in nearly as much sugar as a Snickers bar! Another disheartening detail? The "french vanilla" flavor is actually just a sad mix of sugar and natural flavors (nope, we don't know what those are either).

Appearance & Consistency: One of the first things I noticed about this eccentrically-shaped cup, besides its diamond-like container, was that the contents within were speckled and thick.

Taste: The spotted yogurt foreshadowed great texture and unadulterated vanilla taste, but I got nothing of the sort. Sure, the stuff was creamy and thick, but its taste started off sour and then transitioned to sweet… sort of like a Sour Patch Kid.

Australia may be winning with its beaches, reefs, and poke bowls, but definitely not with its yogurt. Given the incredulous amount of sugar in a tiny four-ounce cup, Noosa stomped on our lofty expectations for this unstrained Aussie "yoghurt."

Taste: The second ingredient in this stuff is cane sugar, and we could definitely taste that. The vanilla flavor was mild, and the overall taste was just average.

Activia isn't the type of yogurt that will hold you over until lunch time. And nutrition wise, you shouldn't want it to either. Why? Just take a gander at its crushing sugar to protein ratio and lack of natural vanilla! Not to mention, Activia boasts about the billions of active cultures lurking in its cup—but these belly-friendly bugs aren't too beneficial when they're tainted with sugar.

Appearance & Consistency: Organic Valley's offering had the weirdest appearance of them all. The random peach-colored clumps dispersed around the cup's perimeter and serious water separation deterred us from looking forward to trying this. Despite stirring, the grainy texture remained.

Taste: This pick is made from 100 percent grass-fed milk and you'll definitely taste the difference. Although the flavor wasn't totally unappetizing, it was definitely distinct.

If it was possible to get over the intensely grainy consistency, we'd rank this one a bit higher for its naturally unique taste. Since this 'gurt is made of milk from grass-fed cows rather than grain-fed, snacking on it will lend your bod an extra dose of fat-frying fatty acids like Omega-3s and CLA. Bottom line: nutrition wise, we give this one an A, but depending on your taste preferences, this pick is a hit or miss. 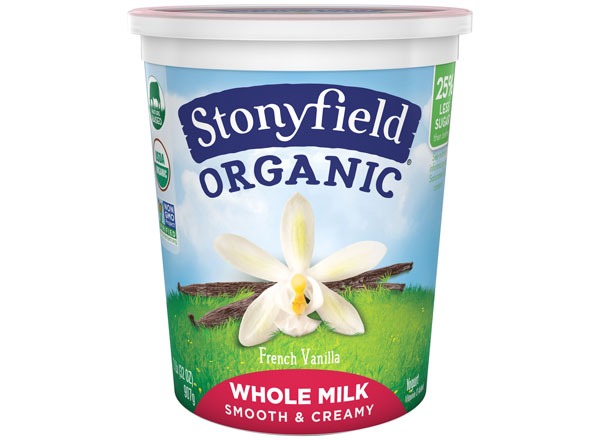 Appearance & Consistency: This one had a noticeable amount of water separation and I was able to cut into it like Jell-O. Even after stirring the stuff for a good 20 seconds, I wasn't able to achieve a velvety texture. It was thin and runny.

Taste: Although the Stonyfield yogurt's foundation starts off with organic whole milk, it didn't translate to that rich taste we expected. For 15 grams of sugar (which is almost 4 teaspoons of the granulated stuff), the sweetness was very mild.

We didn't like the watery, clumpy texture that didn't improve despite continuously mixing it. And considering this is made of whole milk, we expected a way creamier, indulgent experience. What's worse, this pick has the least amount of protein per ounce of the bunch. 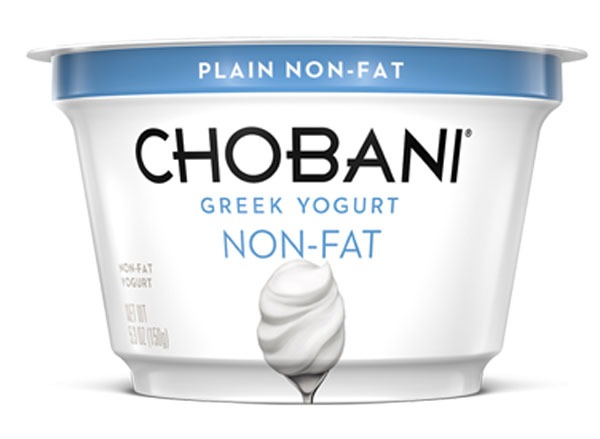 Appearance & Consistency: This Chobani pick resulted in a silky texture after some stirring and wasn't super dense like some Greek yogurts.

Taste: Something about it (perhaps the tang and lingering aftertaste) reminded me of orange juice. And, I don't know about you, but a likeness to OJ isn't something I look for in a yogurt.

This one was weird, to say the least. While it fit the Greek yogurt bill for its density and tartness, this Chobani was also a bit bitter. Although I am a fan of Chobani's Greek blended yogurts, this plain pick wasn't up my alley. 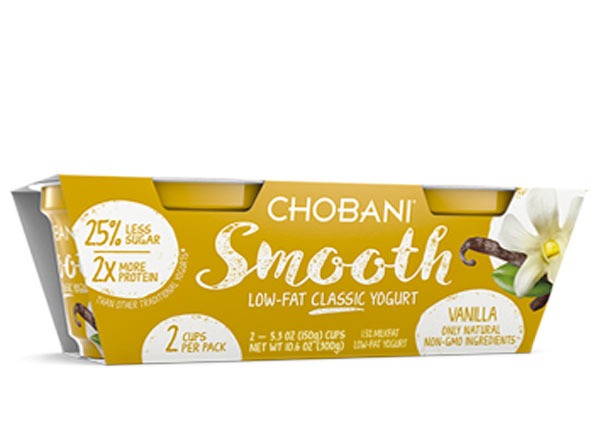 Appearance & Consistency: Thin and silky, just like traditional yogurt. The thick yogurt clumps bordering the inside of the container made me crave a denser yogurt.

Taste: While I wholeheartedly appreciate a good vanilla yogurt, this could've been it if it were slightly less sweet.

Remember the good ol' 'gurts you used to buy before the international-inspired ones (ahem, Greek) gentrified the yogurt aisle? Well, this classic yogurt is just like them. It's smooth—as the giant cursive letters on the label imply—(too) sweet, and as nostalgic as they get.

Appearance & Consistency: I achieved the desired consistency after just a few seconds of stirring. This Greek pick wasn't too thick or thin and was super smooth.

Taste: Oikos Triple Zero boasted a manufactured vanilla flavor with a slight sweetener aftertaste, thanks to the stevia. And unlike traditional Greek 'gurt, this one wasn't tart at all.

This one offering makes our Top 5 because of its stellar nutritionals. In addition to packing in 15 grams of muscle-maintaining protein, Dannon tossed in chicory root fiber for an extra kick of satiety. No wonder it's the official yogurt of the NFL! If this brand used whole milk instead of nonfat milk (for healthy fats), Oikos Triple Zero would've been a perfectly balanced snack or meal. Nonetheless, if this guy can fuel a football player, it can totally beat your 2PM slump. 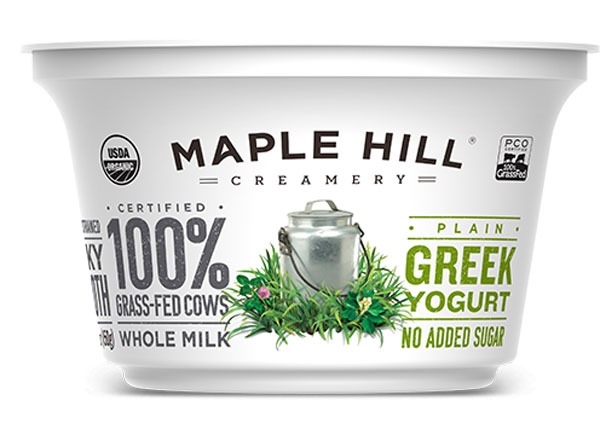 Appearance & Consistency: I had to give this one a stir before diving into it, and fortunately, achieved a creamy consistency.

Taste: Maple Hill Creamery's Greek variety was extraordinarily rich and had that sinful full-fat taste. It was neither sweet, tart, nor dense—properties uncommon for Greek yogurt. It did have a good balanced flavor albeit grassy aftertaste.

Despite that unmistakable grass-fed milk flavor (note: it may be more of an acquired taste), this pick was the most luscious of them all. What's more, its taste and texture was so similar to sour cream that we just couldn't pass this one up! (Psst, dollop this onto a loaded baked potato for a healthy spin on the snack.) 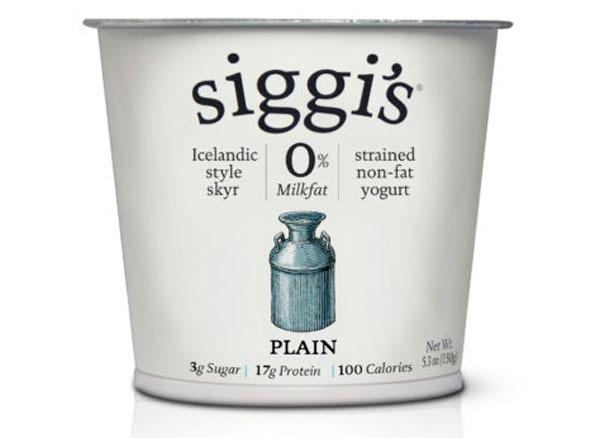 Appearance & Consistency: Siggi's was extremely dense and velvety, we were surprised its first ingredient is skim milk!

Taste: Wonderfully thick and tart, just like Greek yogurt should be.

Most folks can't stomach the sour taste of plain Greek yogurt—but this one's definitely an exception. The silkiness lended this nonfat yogurt a satisfying full-fat flavor and mouthfeel. And with a mere three grams of sugar, 100 calories, and impressive 17 grams of protein, you're definitely getting a solid bang for your buck. 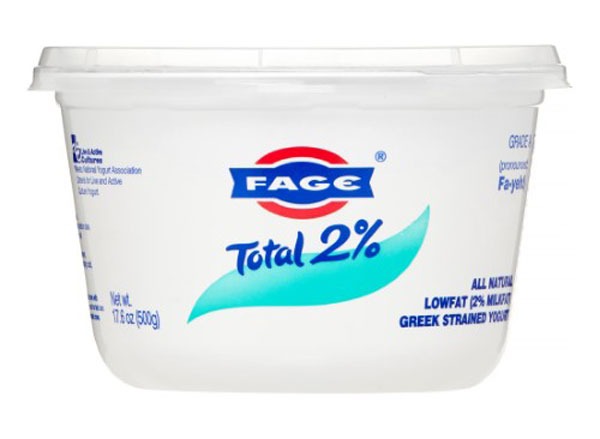 Appearance & Consistency: Unlike any other yogurt on this list, Fage Greek's surface was adorned with a thin piece of parchment paper (to further strain the excess whey), which results in an extra thick dairy treat.

Taste: This tasty option is exactly what comes to mind when you think of Greek yogurt: it's both tangy and blissfully rich. You can enjoy this one on its own or mixed into smoothies, homemade salad dressings, or layered in a parfait.

Fage (pronounced fa-yeh, in case you were wondering), stems from 1926 Athens and is the #1 yogurt in Greece. Due to a texture so satisfying, it's our own #1 Greek pick, too! Although it curdled before it became smooth, a bit of arm grease was enough to deem this heavenly yogurt one for the gods. 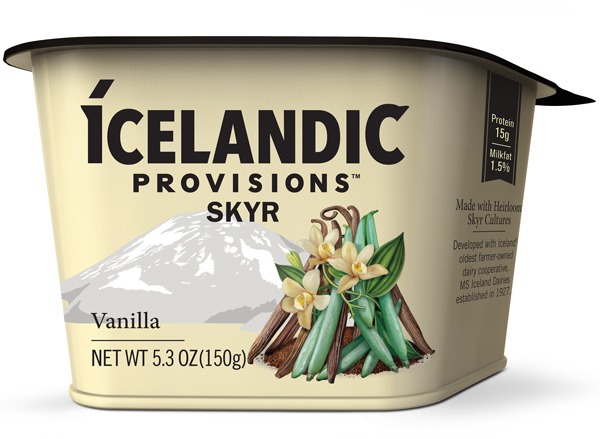 Appearance & Consistency: This skyr is spiked with vanilla seeds and even smells like its flavor! (Finally, real vanilla!) Icelandic Provisions got an A+ for skilling this yogurt's impressive silkiness.

PSA: Cloud Nine exists and I've been transported there via this yogurt. Icelandic Provisions nailed the taste and texture by infusing its treat with natural vanilla and pinching in a slight crunch with the vanilla seeds. Once you pick up a tub, I guarantee you'll never look back.