If You Love Beef Jerky, You're Going to Love Biltong, Too

Step aside, jerky. There's a new meat snack in town that's both healthier and meatier.

If you haven't heard of biltong, it's time you get your hands on a package. It is often compared to beef jerky, and for good reason: the two meat snacks look nearly identical. It's the taste and texture that differentiates the two. Also, the two snacks are made in completely different ways, and one happens to be healthier than the other. To better understand what this delicious meat snack is, we called on Angelo Viterale, chef and owner of Ornella Trattoria, an Italian restaurant in New York City, to give us some insight.

What is biltong, and what are its origins?

"Biltong is a form of dried, cured meat that originated in Southern African countries," says Viterale. "Various types of meat are used to produce it, ranging from beef and game meats to fillets of meat cut into strips following the grain of the muscle, or flat pieces sliced very thin. It is extremely similar to a kind of jerky."

The beef that's used to make biltong is marinated in simple spices and ingredients such as salt, pepper, ground coriander, and vinegar. The meat snack has been made in South Africa for centuries.

How is biltong different from beef jerky?

Biltong meat is air-dried and then sliced into strips. Jerky, on the other hand, is typically cut into strips first, marinated second, and then cooked.

"The vinegar, salt, and spices in biltong, together with the drying process, cure the meat as well as adding texture and flavor," says Viterale. "Jerky is traditionally dried with salt but without vinegar [and] is often smoked. Meanwhile, biltong is never smoked."

Oftentimes, beef jerky is sold in a variety of different flavors such as garlic, teriyaki, and even habanero, just to name a few. This is because jerky is flavored and cured by means of marinades or spice rubs, whereas biltong only contains simple spices or seasonings specific to Africa.

Jerky is also cooked either in a dehydrator or smoked, and biltong is made through a process called air-drying. To make a mass amount of the snack, the air-drying process involves lying the meat onto metal trays where they shrivel in hot air drying chambers. In other words, it's never cooked.

How would you describe the difference in taste and texture between biltong and beef jerky?

"Biltong has a very strong gamey taste," he says. "As for jerky, the second you bite into it, you taste the smokiness right away." The texture of the two is also wildly different. Biltong is more tender and chewy than jerky, which is much tougher and hard.

How is biltong healthier for you than beef jerky?

"As far as nutritional facts go for biltong, in general, it's normally much healthier than jerky, as it tends to be much leaner. An average serving contains almost 50 percent of your daily protein," says Viterale. A 2-ounce package of Bawnmore's Traditional Biltong has 150 calories, 460 milligrams of sodium, and a whopping 31 grams of protein. For comparison, two ounces of Jack Links Extra Tender Original Beef Steak Strips jerky costs you 160 calories, 1,020 milligrams of sodium, and 20 grams of protein.

Here are some of our favorite biltong brands.

So, have we convinced you to try it yet? If so, here are a few biltong brands we recommend and think you'll love. 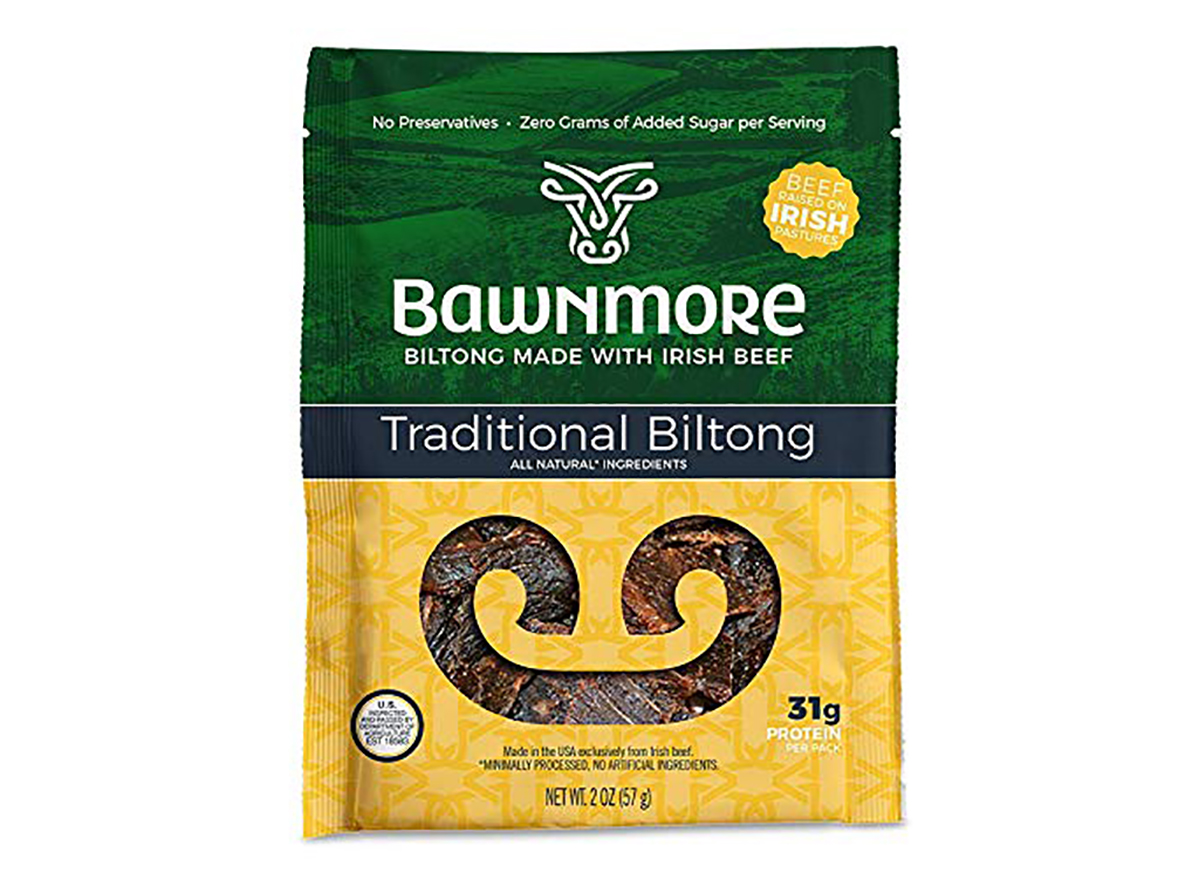 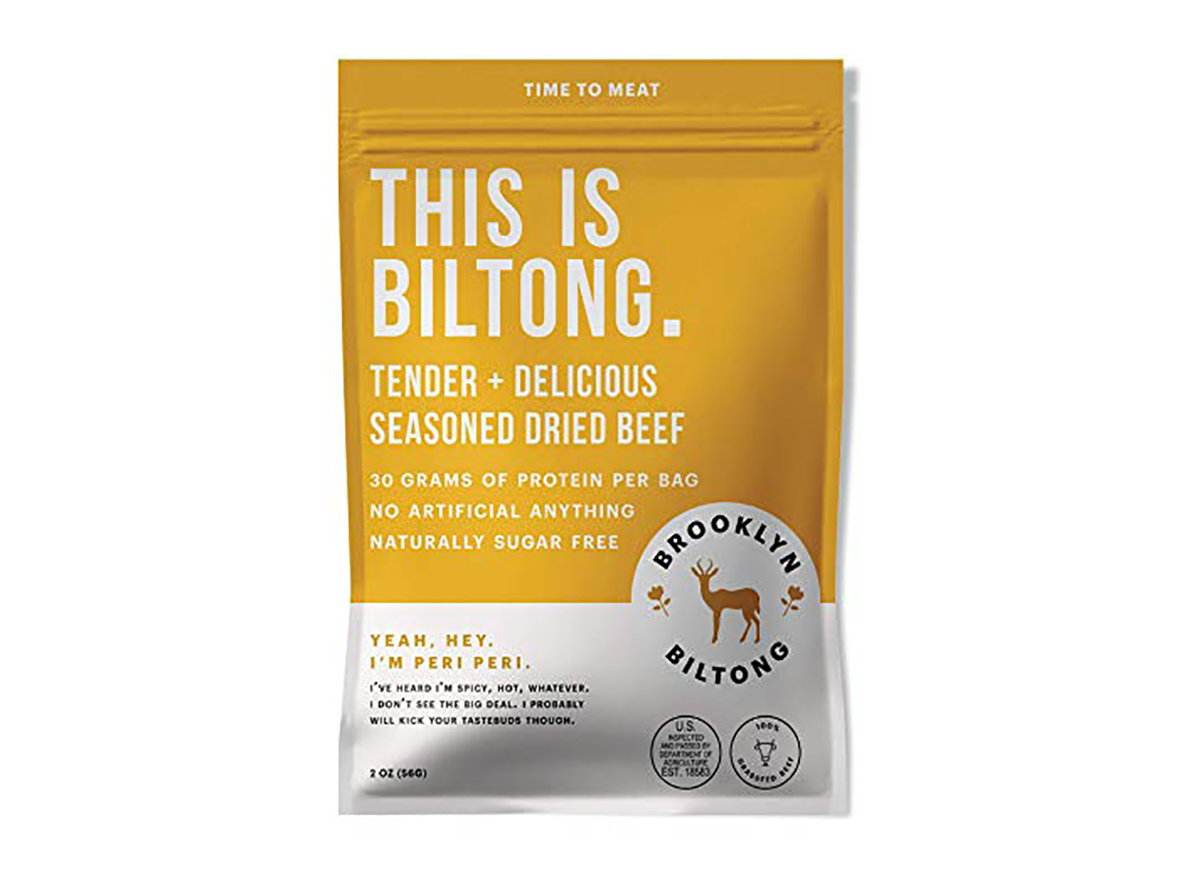 Brooklyn Biltong also whips up three different kinds of the air-dried meat, but if you're looking for something that's packing some heat, the Peri Peri variety may be of interest to you. This spicy biltong is seasoned with garlic, chilies, and cayenne pepper. 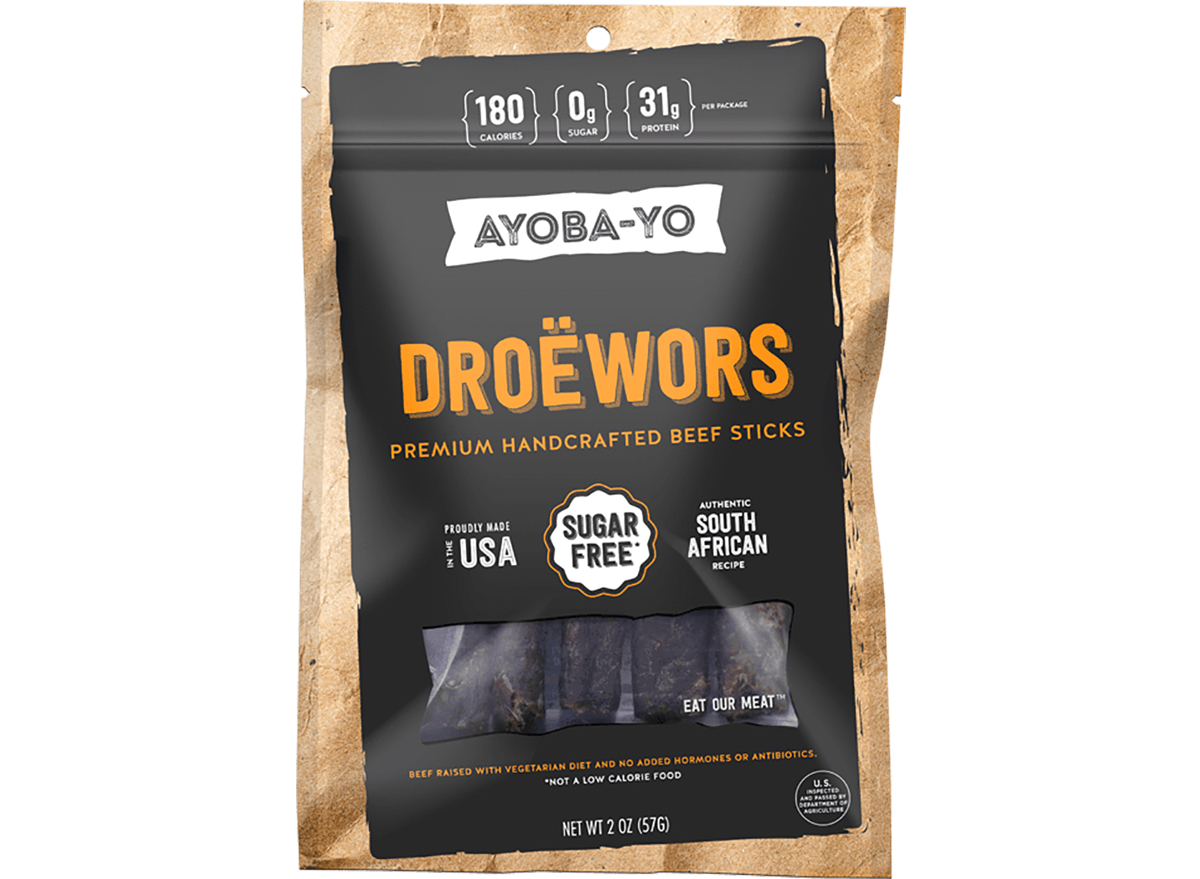 Ayoba-Yo offers a different kind of traditional biltong known as droëwors, which translates to dry sausage in English. This biltong is seasoned with coriander, cloves, salt, and pepper and hung to dry for over five days. Slim Jims don't stand a chance against this meat stick.