What's Really In Your Chicken Nuggets?

The drive-thru staple is berated for its manufacturing process—but are the ingredients all that bad?

Processed meats—chicken nuggets especially—get a bad rap for their manufacturing process. The Internet is infested with countless horror stories surrounding how the drive-thru staple is made, most notably, claims of pink slime and animal bones usurping the ingredient list. To get down to the bottom of what's really in your chicken nuggets, we did some digging to demystify these urban myths.

What's really in your chicken nuggets? 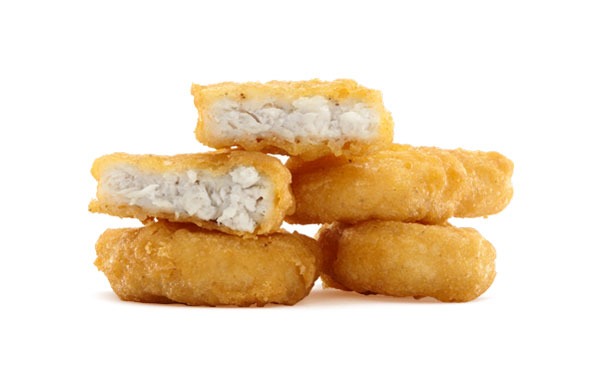 McDonald's Chicken McNuggets' ingredient list reveals that the first ingredient is, in fact, white boneless chicken. However, a 6-piece meal contains about half of the calories coming from fat—which is undeniably alarming since white meat is the leanest portion of the chicken. Since the majority of the fat isn't naturally occurring in the meat, where is it coming from? Let's not forget that Mickey D's snack food is battered and then fried in four types of oil, including hydrogenated soybean oil—a source of heart-disease-causing saturated fat. What's more, we couldn't help but notice that the fast-food giant uses a leavening mixture that contains kidney-harming phosphates, which are used to add moisture to the McNuggets.6254a4d1642c605c54bf1cab17d50f1e

So what about pink slime?

Sorry to break it to the fast-food skeptics: McNuggets aren't made from pink slime. The rosy-hued mystery meat is actually made from processed lean beef trimmings, which are sometimes used as fillers to bulk up meat products. According to a revelatory video recorded at one of McDonald's chicken nugget manufacturing plants, the production process starts off with breast meat, tenderloin, and rib meat—zero pink slime in sight. McDonald's ceased using beef trimmings in their burgers in 2012 but never added the questionable goop to the nuggets.

However, not all nuggets are made equally. A study in the American Journal of Medicine dissected and analyzed chicken nuggets from two undisclosed restaurants and found that both offerings contained much more than just meat. The results showed that the chicken nuggets tested contained equal or greater parts of fat to meat as well as epithelium, bone, nerve, and connective tissue.

According to Reuters Health, the study's lead author Dr. Richard D. DeShazo of the University of Mississippi Medical Center in Jackson, acknowledges that the sample size is too small to generalize against all major fast food restaurants and that the chains sampled did not list white boneless meat as the first ingredient in their nuggets—like McDonald's does.

So while it's safe to say that McNuggets are mostly made out of what they should be made out of—real chicken meat—that doesn't mean you shouldn't scout out the ingredient lists of offerings at other chains. If you're hitting the drive-thru for nuggets, make sure they list white boneless meat as the first ingredient or opt for some of these 20 Surprisingly Healthy Fast Food Orders instead.