It's Dangerous to Drink Your Coffee This Way, Says New Study

If you prefer to grab your daily cup of coffee on-the-go, a new study recently published in The Journal of Hazardous Materials may convince you to start brewing your own morning cup of Joe from the safety of your own kitchen. The findings suggest that drinking coffee, tea, and other piping hot beverages out of paper cups with linings that contain plastic film may be flooding your body with hazardous microplastic particles that can potentially have harmful consequences for your health.

"An average person drinking three regular cups of tea or coffee daily, in a paper cup, would end up ingesting 75,000 tiny microplastic particles, which are invisible to the naked eye," explains Sudha Goel, MD, the lead author on the study. "In the 15 minutes it takes for coffee or tea to be consumed, the microplastic layer on the cup degrades."

The study, conducted by a team of academic researchers at the India Institute of Technology, is the latest to shed light on the dangers posed by unwittingly consuming microplastic particles, which are defined as tiny pieces of plastic or synthetic fibers that are 5mm in size or less (roughly the size of a sesame seed and smaller) and are the byproduct of countless products you come into contact with on a daily basis, including car tires, clothes, and beauty products. Reports say that an untold number of microplastics have found their way into the earth's water sources and oceans, and they pose a threat not only to aquatic life but also to humans. According to a study by the World Health Organization, microplastics exist in 90% of all bottled water samples they tested—which drew on 259 bottles of 11 separate brands hailing from nine different countries.

Though studies exploring the health effects of the existence of microplastics in the human body are only just the beginning, experts have begun sounding the alarm on the potential dangers. Inhalation of microfibers can cause disease, even cancer. Earlier this year, a research team from Arizona State University found traces of bisphenol A (BPA), an insidious chemical used to make plastics that's been well known to wreak havoc on the human body, in every single sample of human tissue (lung, kidney, spleen, and liver) they tested as part of their study. "We never want to be alarmist, but it is concerning that these non-biodegradable materials that are present everywhere [may] enter and accumulate in human tissues, and we don't know the possible health effects," Varun Kelkar, a researcher and Ph.D student at ASU, told The Guardian.

The folks at Consumer Reports don't mince their words when they explain the dangers: "These chemicals have been linked to a variety of health problems, including reproductive harm and obesity, plus issues such as organ problems and developmental delays in children."

In the case of paper coffee cups, the research team in India noted that most paper cups aren't all paper—they come with an interior containing a film that's lined with plastics. "The objective of this study was to evaluate the degradation of these films as a result of exposure to hot water (85–90 °C)," they wrote. "Due to deterioration of the films, ions like fluoride, chloride, sulfate, and nitrate were released into the water contained in the paper cups."

So consider yourself warned. And if you're looking to minimize your consumption of microparticles, here are a few tips from Consumer Reports. For more of the hazardous chemicals you should avoid, don't miss this list of All of the Scary Toxins Hiding in Your Kitchen.

Given that the WHO discovered microplastics in 90 percent of all bottled water samples, you can make sure to drink more tap water and less store-bought water.

For more healthy eating news, make sure to sign up for our newsletter.

Don't Heat Your Food in a Plastic Container

"Heated plastics have been known to leach chemicals into food," writes Consumer Reports. "The American Academy of Pediatrics also recommends not putting plastic into your dishwasher."6254a4d1642c605c54bf1cab17d50f1e

The dust that accumulates on the surfaces of your home can contain harmful chemicals such as flame retardants. Frequent cleaning can help ensure you're minimizing your exposure. 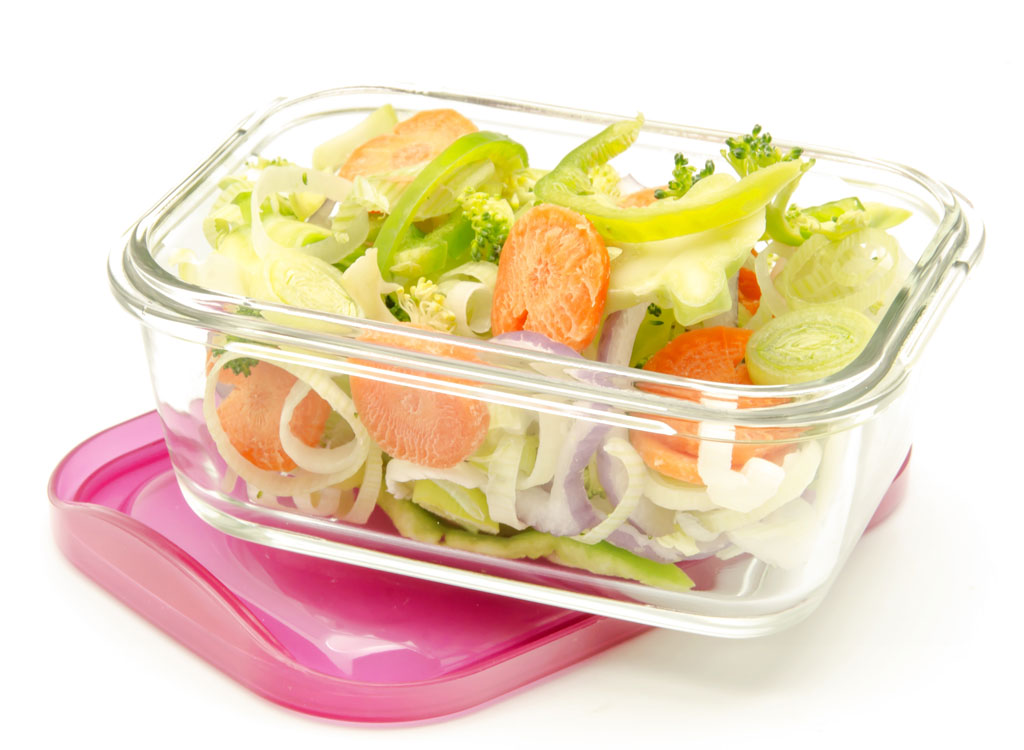 "The experts we spoke with say that consumers should opt for products packaged in glass instead of plastic, use reusable nonplastic containers whenever possible, and support policies limiting the use of single-use plastic," writes Consumer Reports.

For more health dangers you should be aware of, don't miss this list of Hidden Health Dangers Lurking in Your Home.