Dirty Hygiene Habits You Didn't Know You Had, Say Experts

Even some of the most fastidious people you know are guilty of these dirty habits.

Just like excellence, personal hygiene is not an act but a habit—and pretty much everyone over a certain age thinks they have their personal hygiene under control. However, the data consistently tells us otherwise. For example, according to a recent poll put together by Pharmacy Times, 42% of all Americans asked don't even wash their hands after using the bathroom.

Now, if occasionally skipping the sink after a trip to the toilet doesn't seem like a big deal to you, consider one study published in The Lancet, which found that poor bathroom hygiene habits are far more likely to spread the E.coli bug than anything involving food or the kitchen. And if you think such behavior is going unnoticed, know that a survey conducted in the UK found one in five adults have ended a relationship over their partner's bathroom habits. (Yikes!)

Think you've got perfect personal hygiene? Read on, because here are some bad hygiene habits you may not have known you're doing. And for more ways you can lead a cleaner, healthier life, don't miss The Secret Trick for Getting Fit Using Your Toothbrush.

You're Using Your Phone on the Toilet

It can be tempting to go for a new high score or catch up on social media feeds while sitting on the throne, but it's a hygiene risk not worth taking. "I see people take their phone into the bathroom all the time, and cell phones do pick up lots of germs," Charles Gerba, Ph.D, a microbiologist at the University of Arizona, told The Healthy. Gerba went on to say that there's a decent chance your phone is home to more germs than your toilet seat.

Similarly, a UK research project put together by the London School of Hygiene and Tropical Medicine found 92% of examined phones contained "potentially problematic bacteria" and that one in six housed fecal matter. A more recent US-based study found a diverse array of bacteria living on examined smartphones. So if you're going to the john, be old school and read a book! And for more healthy living advice you use can use, see here for The Worst Things Everyone Gets Wrong About Walking, Says Olympic Walker. 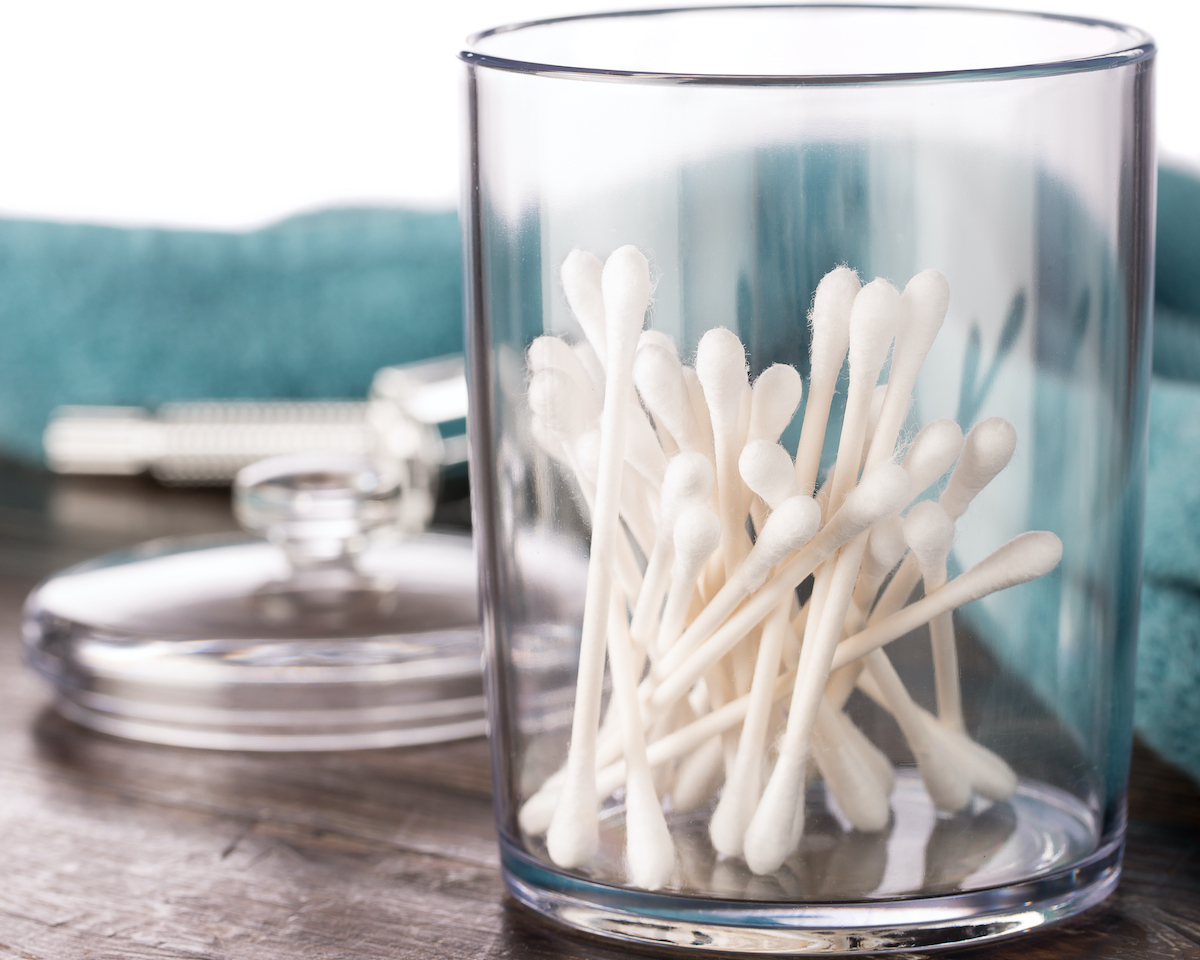 Cleaning out excess earwax may seem like a no-brainer, but—believe it or not—it often does more harm than good. According to the American Academy of Otolaryngology, no foreign object smaller than your elbow should be entering your ears for any reason.

"Patients often think that they are preventing earwax from building up by cleaning out their ears with cotton swabs, paper clips, ear candles, or any number of unimaginable things that people put in their ears," says Seth R. Schwartz, MD, MPH, chair of the AAO. "The problem is that this effort to eliminate earwax is only creating further issues because the earwax is just getting pushed down and impacted further into the ear canal. Anything that fits in the ear could cause serious harm to the eardrum and canal with the potential for temporary or even permanent damage."

So think twice before you start swabbing your inner ear.

You're Neglecting Your Fingernails and Your Nail Clippers

Everyone knows it's important to wash his or her hands—especially in a COVID-19 world—but all too often our fingernails get neglected. According to the CDC, dirty fingernails can spread a number of infections, including pinworms. As Esteban Kosak, MD, a doctor and researcher at Symptoms Care, explained to our friends at Best Life, waiting to trim your fingernails comes with risks. "When you don't cut your nails often, they can easily get damaged and break, and are more likely to harbor dirt and bacteria that can potentially spread infection," Kosak said.6254a4d1642c605c54bf1cab17d50f1e

What's more, your clippers can become a haven for bacteria and fungal spores. "Fungal spores can live on all kinds of surfaces for months—including metal toenail clippers," write the folks at SteriShoe. "When you cut your fungal nail with your clippers, you can easily transmit the fungi to other toenails or fingernails—and even reinfect yourself—if you don't properly sanitize your clippers."

To sanitize your clipper, it's best to scrub them thoroughly in rubbing alcohol.

Keeping Your Toothbrush Near Your Toilet

If your toothbrush spends most of its time dangerously close to your toilet, you may be putting yourself at risk of some cross-contamination. Whenever a toilet is flushed, an invisible cloud of microscopic particles make their way into the surrounding environment, and that includes traces of both urine and feces. While no confirmed health issues have been linked to toilet plume infected tooth brushes, who wants to risk it? Do yourself (and your peace of mind) a favor and move your toothbrush to the other side of the bathroom.

"Toothbrushes should be stored upright in an environment that allows for them to dry out completely between uses," Mia L. Geisinger, D.D.S., M.S., associate professor and director of the Advanced Education Program in Periodontology at the University of Alabama at Birmingham School of Dentistry, told SELF.

You're Washing your hair every day 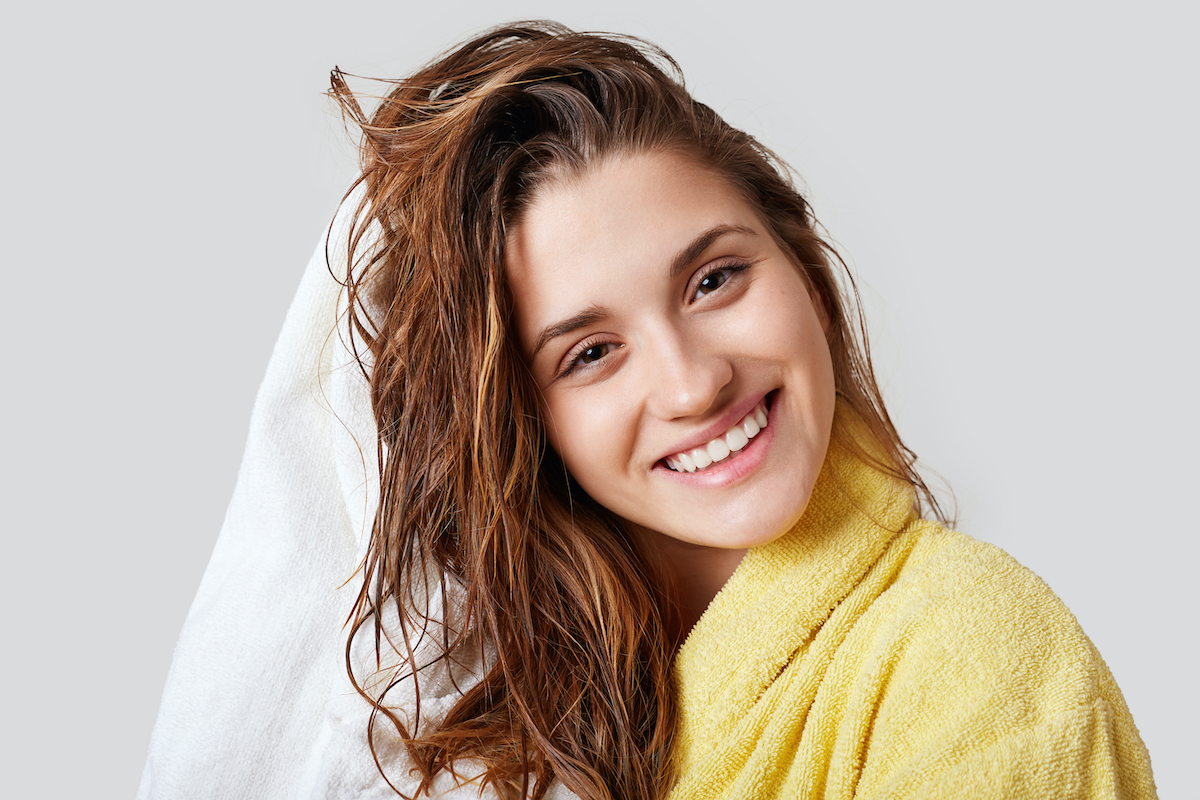 Are you picking up the shampoo each and every time you enter the shower? If so, you're putting your luscious locks at risk. Your scalp produces natural oils that are important to healthy and shiny hair, and the main reason for using shampoo is to rid your hair of dirt and excess oil. So, contrary to what your favorite shampoo commercial might be telling you, soaping away all of those natural hair-boosters too often will dry out your scalp, rob your hair of essential oils, and ultimately lead to a dry and less lustrous hair.

This is especially true for those with longer hair. "For shorter hair, it's not as bad, as the hair is more virginal," Toni & Guy International Artistic Director Philipp Haug told Glamour. "But, overall, washing your hair too often will strip the hair of its natural oils and can dull hair color." And for more on your follicular health, check out The Single Best Exercise For Stopping Hair Loss, Says Science.

You're Never Cleaning Your TV Remote

Most people know to clean their smartphone periodically, but your TV remote? Yeah, it's one of those household items we use every single day and had no idea that we needed to maintain it. But, put simply, here's why you should start: Most TV remotes are covered in germs and viruses.

A study conducted by the University of Virginia discovered traces of the common cold on half of all tested TV remotes. "Anything people touch a lot has germs on it," Eileen Abruzzo, director of infection control at Long Island College Hospital of Brooklyn, explained WebMD. Now, imagine how many times you, your family, your friends, and even your dog come into contact with your TV remote. Got it? You'd be wise to start cleaning it.

It's all too common for people to find themselves brushing their teeth with one foot out the door in the morning, while standing in the bathroom half-asleep just before bed. We get it: Brushing your teeth for a full for a full two minutes twice-per-day—the minimum recommended time that's considered a proper and sufficient bout of toothbrushing—can be an enormous pain. One recent survey out of the United Kingdom even found that a staggering 48% of adults consistently "miss" at least a quarter of their teeth while brushing. According to one study, the majority people brush for an average of only 45 seconds.

But giving your teeth short shrift in the brushing department puts you at a risk of not only plaque buildup and cavities, but it will also put you at greater risk of gum disease and even oral cancers. So take your time, and brush on!

You Use Dirty Towels for Days and Days

Did you know that a shower towel can house bacteria, mold, and yeast after just a few days of use? All the moisture we leave behind after drying off makes shower towels the ideal home for any number of microbes, which is why Consumer Reports recommends switching to a fresh towel every three to four days (even more often if you're sweating heavily every day).

Don't forget to replace your hand towels every one to two days as well. According to some reports, waiting any longer may defeat the entire purpose of hand washing. And for more ways to live a smarter, cleaner life, don't miss these Showering Mistakes That Are Damaging Your Hair, Say Stylists.

John Anderer
John Anderer is a writer who specializes in science, health, and lifestyle topics. Read more about John
Filed Under
Body Health