8 Fast-Food Chains That Use the Highest Quality Meat

These chains have received high marks for their antibiotic-free policies.

On days when you're tight on time or simply craving a burger in all its greasy glory, let's face it: Nothing beats the convenience of a fast-food chain.

The good news is that fast-food chains can be included in the mix of a healthy diet—especially if you're mindful about brands that go the extra mile in sourcing beef for their burgers. "When fast food is the only option, some choices are better choices than others when it comes to choosing quality meats," says dietitian and nutrition coach Jennie Dore.

The biggest issue when it comes to fast-food beef is the overuse of antibiotics in food-producing animals—which can lead to antibiotic resistance. That, in turn, causes a host of public health problems. In fact, the WHO calls antibiotic resistance one of the "biggest threats to global health, food security, and development today," according to their site.

So, who carries high-quality beef? (Definitely not these 12 fast-food chains.) Dore says that chains that take extra measures, receive regular audits, and are careful about additives, will happily display this extra care on their website and marketing.

We can also rely on the annual Chain Reaction scorecard from the U.S. Public Interest Research Groups (PIRG), which researches fast-food chains' policies on antibiotic use and doles each one a letter grade from A to F.

"Grading the companies is critical to show consumers which chains are doing the right thing so they can support them, and which chains aren't," says Matthew Wellington, Public Health Campaigns Director for U.S. PIRG and U.S. PIRG Education Fund.

The most recent scorecard, he says, showed that fast-food companies need to push their beef suppliers harder to stop overusing antibiotics. "If more companies draw a line in the sand that they won't accept beef raised with routine antibiotic use, it will help shift the industry away from this dangerous practice."

PIRG's report also mentions several smaller regional chains with some commendable antibiotic policies. Wellington says they didn't grade these chains but they still included a short section highlighting their progress to show that it's possible to source beef raised without overusing antibiotics.

Here are the fast-food chains that pride themselves on using antibiotic-free beef. And don't miss 8 Fast-Food Chains With the Most Toxic Food Packaging.

With the only 'A' on the scorecard, Chipotle is the head of the class. It was the only company surveyed by the PIRG that both requires suppliers to track antibiotic use and publicizes that information to its customers. "Chipotle prohibits suppliers from using antibiotics on the beef purchased by the restaurant, so the chain's reported use of antibiotics in beef is zero," states the report.

No surprise here that Panera is close behind with an 'A-.' Back in 2004, the chain was already debuting chicken raised without antibiotics on its menu. According to PIRG's report, Panera's suppliers now track antibiotic use in beef, too. It also reveals, however, that they don't report the specifics to Panera. A goal for the future?

BurgerFi has also been awarded top marks for its policy on antibiotic-free beef for several years in a row.

"At BurgerFi, we're deeply committed to providing our guests the best restaurant experience by using the highest-quality ingredients," the chain said in a statement. "We use 100% American Angus Beef with no steroids, antibiotics, growth hormones, chemicals, or additives for all our burgers."

Burgerville, a restaurant chain in Oregon and southwest Washington, says its antibiotic-free beef comes from cattle raised in the Pacific Northwest. Its pork, turkey, and chicken are all antibiotic free, too.

Californians can find high-quality beef at all Burger Lounge locations, which gets its antibiotic-free and hormone-free beef from Grass Run Farms. 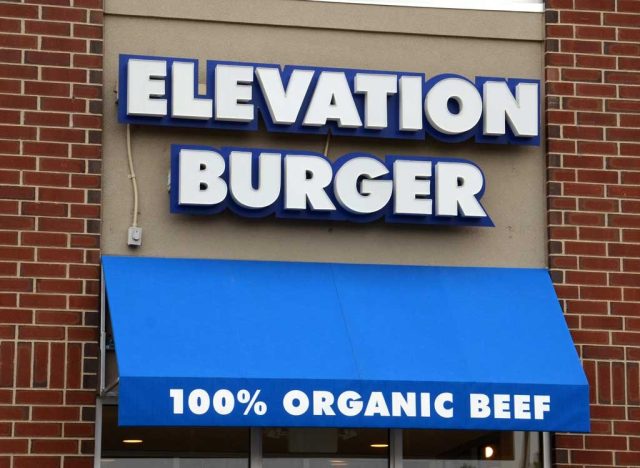 Virginia-based Elevation Burger also received a shoutout in the Chain Reaction scorecard. Its 40+ national and international locations serve up organic, grass-fed beef, and free-range chicken with no antibiotics.

Wendy's is making moves toward better burgers, with a commitment to prohibit the routine use of medically important antibiotics in its beef supply by the end of  2030.

Burger chain Fuddruckers does have some antibiotic-free options on the menu, including its American Kobe and Buffalo burgers, but not have an official policy on the beef it sources.

According to its website, Taco Bell has committed to reducing antibiotics important to human health, those that when overused in feed can cause antibiotic resistance in humans in the U.S. and Canada by 25% by 2025.

Subway has also committed to switching to beef and pork raised without medically important antibiotics by 2025.

An earlier version of this article was originally published on Apr 11. 2022. It has been updated with new information.

Melissa Fiorenza
Melissa Fiorenza has been writing for over a decade on a range of topics, including mental health, nutrition, fitness, parenting, and women's issues. Read more about Melissa
Filed Under
Burgers // Fast Food // Food Crimes // Restaurant Chains