Eat This, Not That! to Fight Spring Allergies

Warning: While certain foods can ward off the springtime sniffles, other eats can make your runny nose worse.

The weather is warmer, the birds are chirping, and the flowers are blossoming. But you? Your eyes are itchy, your nose is runny, and your head feels like it's under more pressure than a batter at the bottom of the ninth, bases loaded, tie game, and a full count. And you're not alone. Around 35 million Americans suffer from seasonal allergic rhinitis, also known as hay fever or an allergy to pollen. But besides popping an antihistamine pill every day and limiting your time outside, what else is a seasonal allergy sufferer to do? Make some tweaks to your diet, that's what.

What you eat can have a big impact on the extent to which you suffer from symptoms. Research suggests that certain foods can help fight allergies naturally by controlling underlying inflammation, clearing out air passages, and providing other relief effects. Conversely, other foods can actually trigger allergy symptoms either by indirectly worsening symptoms or directly through oral allergy syndrome (OAS). OAS occurs when your body mistakes proteins in certain raw foods for the same allergenic proteins in pollen, confusing your immune system and making existing ailments worse. (Yup, that's why your throat gets itchy when you eat carrots or apples!) While foods that cause OAS can affect you anytime of the year, certain foods that have proteins most similar to those in birch and grass pollen (the common causes of allergies in the spring and early summer) will worsen your spring symptoms even more. On the upside, cooking those foods neutralizes the offending proteins. So that's a plus. (More on that later!)

If you're sick and tired of being sick, and tired, Eat This, Not That! has your back. We've put together a list of the surprising foods you're probably eating without knowing they could be making your nose runnier and your eyes itchier, and which foods you can replace them with to help part with that post-nasal drip. (Psst: If you're looking for foods to help you lose a few pounds before the warmer months, don't miss these 12 Foods to Spring Clean Your Body.)

Spice it Up, but Lower the Heat

We're always one to recommend spicy foods, like paprika, to enhance flavor and boost your metabolism, but if you're a seasonal allergy sufferer, it's best to steer clear of them when pollen counts are high. That's because spicy foods create histamine in your body, adding to what's already an increased amount because of your allergies. Histamine is an inflammatory compound produced by cells when your body is undergoing an allergic reaction. It's the thing that causes the tissue in your nose to both run and swell (which makes it stuffy) and your eyes to itch. Fennel, on the other hand, has been found to act as a natural decongestant, offering allergy relief by stimulating the mucosal cilia to help break up congestion. Use the herb to season your grub instead.

Ease Up on Dairy

NOT THAT! Whole Milk

When you're experiencing an allergic reaction, your body creates mucus to help get rid of the invading allergens. (Which is why your nose is constantly runny.) However, certain types of food, like dairy, can temporarily thicken this mucus, making it harder for it to travel out of your body, which causes the allergens to stay in your system. And while not all dairy causes excessive mucus production, studies have found that one type, in particular, A1 milk—which is rich in a specific type of casein protein—has been shown to stimulate mucus production on top of thickening it. Because many variables can influence the final amount of A1 in milk, while some milks can make mucus worse, others might not. Even so, if you're already suffering from a lot of mucus, making it thicker—even temporarily—is kind of a drag. So it's best to avoid dairy products just in case and pick up a casein-protein-free almond milk.

Load Up On Vitamin C 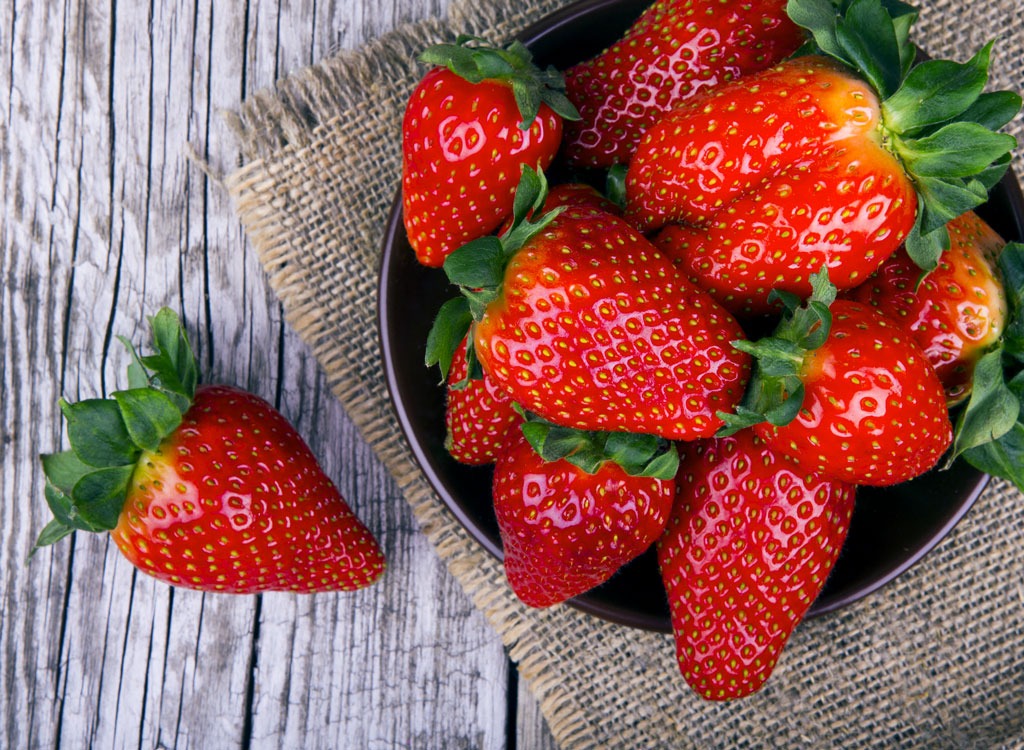 Beat the inflammation-causing histamines with a healthy dose of vitamin C. This vitamin indirectly inhibits inflammatory cells from releasing histamine, and studies have shown that high levels of vitamin C can help histamines break down faster once they're released, which may provide allergy symptom relief. On top of fighting histamines, vitamin C foods also reduce inflammation—key to combating allergy suffering. This is because vitamin C is an antioxidant, which means it can decrease levels of inflammatory free radicals. Pick strawberries over oranges when it comes to vitamin C. Ounce-for-ounce strawberries are actually higher in the vitamin, but that's not the only reason why to eat them over oranges. Oranges have been known to possess proteins that mimic grass pollen, which can exacerbate allergy symptoms even more in the late spring.

Crunch on a Crucifer

NOT THAT! Raw broccoli and cauliflower

Brussels sprouts can annihilate your allergy symptoms in two ways. For one, it's a member of the crucifer family, plants that have been shown to clear out blocked sinuses. This benefit could be linked to the sprouts' glucosinolate content. These compounds help prevent unwanted inflammation when they're converted to I3C—a compound that research has found to decrease the production of pro-inflammatory mediators on a genetic level. It's also high in vitamin K, a vitamin whose deficiency is associated with excessive inflammation. Even though broccoli and cauliflower are in the same crucifer family and possess the same advantages, they also could cause OAS and worsen allergy symptoms if eaten raw, and cooking these veggies can inactivate the enzyme which creates I3C. For best results, eat brussels sprouts raw in a shaved brussels sprout salad or lightly steam them.

NOT THAT! Beer, wine, spirits, and champagne

It might be better weather for some happy hour drinks after work, but if you suffer from hay fever, you should take it easy on the alcohol. Beer, wine, spirits, and champagne all contain histamine and tyramine, two chemicals that set off allergy symptoms in your body. On top of making you more sensitive to pollen's effects, alcohol also dehydrates you, which makes your symptoms seem worse. Instead, go with a steaming cup of green tea. "This tea is teeming with histamine-fighting quercetin," says Kelly Choi, author of bestselling tea-based plan, The 7-Day Flat-Belly Tea Cleanse. Plus, it'll keep your system hydrated, which can help dilute the amount of allergens in your cells. Even better, the steam may help thin out mucus to ease congestion.

Allergy research has shown that bioflavonoids can provide relief by reducing inflammation. One bioflavonoid, quercetin, acts as a mast-cell stabilizer, which decreases the number of cells reacting to an allergen. Mast cells are responsible for releasing histamine during inflammatory and allergic reactions. While apples are a good source of the antioxidant, they also can cause OAS. And while cooking an apple may help kill off the proteins that mimic birch pollen, an article published in the journal Nutrition reported that foods prepared by boiling lost a significant amount of quercetin due to contact with heat and water. Instead, load up on blueberries (one of these 20 Smoothie Ingredients for Weight Loss) if you're in the mood for something sweet, and add red onions (which are also loaded with quercetin) to savory dishes.

Pump Up the Probiotics

Probiotics are thought to have anti-inflammatory and anti-allergic effects by improving the intestinal microbial balance, which is often skewed towards a higher prevalence of inflammation-related strains in allergic subjects, according to researchers. An Italian study published in the journal Pediatric Research, found that young children with allergic rhinitis who drank fermented milk with the probiotic strain Lactobacillus casei experienced fewer allergic episodes over the course of a year than those who took a placebo. Another fermented food, miso, was found to lower the prevalence of seasonal allergy symptoms by about 41 percent when participants ate just a teaspoon a day, according to Japanese researchers. You can get your daily probiotic intake from kefir, Greek yogurt, or miso, but maybe nix the sauerkraut. Sauerkraut is made of cabbage—a food that can trigger OAS—and it's high in histamines, which worsen allergy symptoms.

NOT THAT! Hazelnuts and almonds

Magnesium-rich foods, such as cashews, help relieve allergy symptoms because magnesium is a natural antihistamine. In fact, a study from Brigham Young University showed that animals deficient in magnesium had higher levels of histamine in their blood when exposed to allergens than animals with adequate magnesium levels. Not only that, but because magnesium helps with muscle relaxation (which is why it's great to eat before sleep), it can help ease the soreness in your body and throat. While many nuts are high in magnesium, be sure to steer clear of hazelnuts and almonds; both nuts contain proteins similar to birch pollen that may cause oral allergy symptoms.

Bring On the Omega-3s 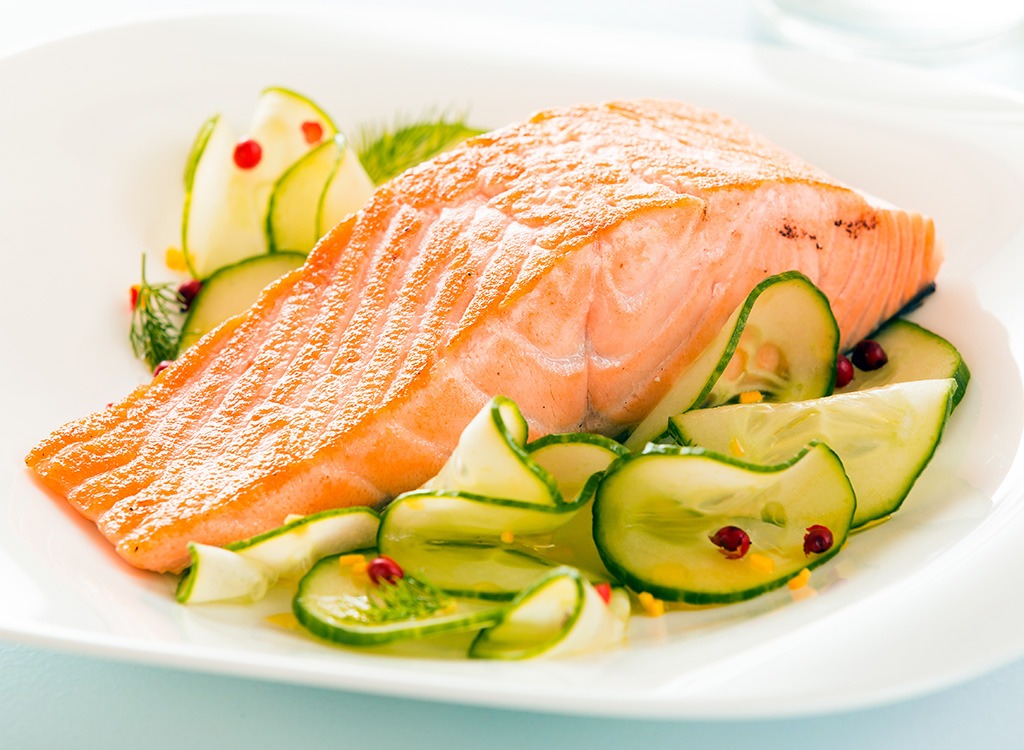 NOT THAT! Tuna fish

DHA and EPA, the two omega-3 fatty acids found in fish, have been found to ease allergy symptoms through their anti-inflammatory properties. And even if you don't have allergies now, you're always at risk of getting them. As it turns out, you're at an even greater risk if your omega-6:omega-3 ratio is skewed more towards omega-6s. A study in the European Journal of Clinical Nutrition found that adults who had a high content of omega-3s (and EPA, specifically) and low content of omega-6s in their blood had a decreased risk of getting allergic sensitisation and rhinitis compared to those with a high content of omega-6s. So eat your threes! Pick up wild pink salmon , which is high in EPA, over tuna fish. Even though tuna is high in EPA, it's also high in inflammation-causing histamines.

Dig into the Carotenoids

NOT THAT! Raw carrots

Carrots are superfoods that pack a powerful punch against allergies. That's because they're rich in the carotenoid department. (And by rich, we mean a single medium carrot gives you 203 percent of your DV of vitamin A.) One of the forms of vitamin A it possesses, beta carotene, has been linked to easing allergy issues in a study in the journal Public Health Nutrition. This study found that adults with low carotenoid stores were more likely to have allergy problems than those with high carotenoid levels. Raw carrots possess a protein that could trigger OAS, so if you do want to snack on them, be sure to boil them. Not only will boiling them kill off the allergen-mimicking protein, but it also will increase their carotenoid content. Add a healthy fat such as coconut oil or olive oil, to further extract these fat-soluble vitamins.

Olivia Tarantino
Olivia Tarantino is the Managing Editor of Eat This, Not That!, specializing in nutrition, health, and food product coverage. Read more