One of the best parts of eating at an American Chinese restaurant (or taking out from one) comes at the end when everyone grabs a fortune cookie. Cracking open that golden, crunchy treat and reading your forecasts out loud has become a tradition in the U.S. These days, you can even learn a Mandarin word or two from your fortune, and you can also play the lucky numbers it contains in the lottery. But have you ever stopped to wonder where Chinese fortune cookies really come from?

Well, the time to learn is now, so read on to discover the fascinating origin story of Chinese fortune cookies. (Spoiler alert: They're not from China.)

And for more food facts, sign up for our newsletter to get daily recipes and food news in your inbox! 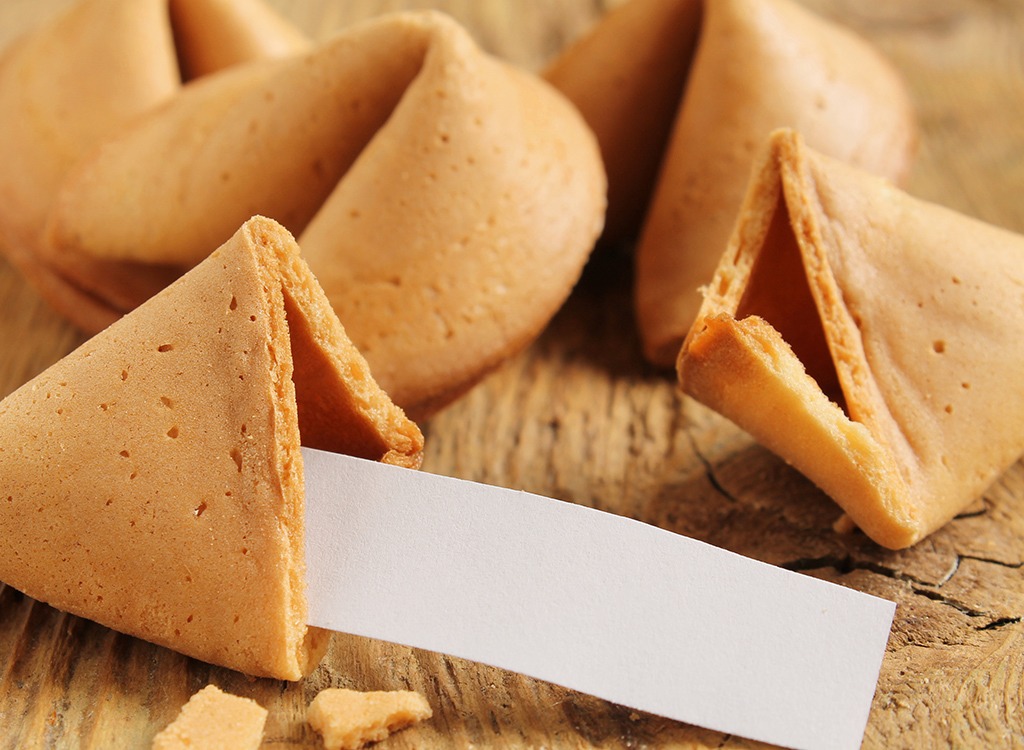 Three different men claim to have invented the Chinese fortune cookie, and they all lived in California in the early 20th century.

Japanese immigrant Makoto Hagiwara, the owner of the Japanese Tea Garden in San Francisco, said he first served the modern version of the fortune cookie in the early 1900s. After an anti-Japanese mayor fired Hagiwara, a new mayor later reinstated him. It's said that he showed his appreciation to those who stood by him with thank you notes hidden inside cookies. (The Japanese Tea Garden's fortune cookies themselves, however, were manufactured by a San Francisco bakery called Benkyodo.)

"As my family was from the nobility, they only considered that invention and introduction of the fortune cookie as a pleasant refreshment to be enjoyed while strolling the garden and enjoying oneself," Hagiwara's great-great-grandson, Erik Hagiwara-Nagata, explained in a 2008 blog post. "We did not think in business terms of patent or protections as is so common in the present day." Later on, that lack of a patent posed a problem.

Chinese immigrant David Jung, founder of the Hong Kong Noodle Company in Los Angeles, made a competing claim that he invented the fortune cookie just before World War I. As the story goes, Jung passed the cookies out to poor people for free, to both feed them and inspire them. Inside of Jung's treats, he placed a strip of paper with a Bible scripture.

San Francisco's Court of Historical Review attempted to settle the fortune cookie dispute in 1983. During the trial, evidence included a set of round black iron grills that "were originally used by the Hagiwara family to cook the fortune cookies," according to The Los Angeles Times. A federal judge determined that the cookie originated with Hagiwara, but plenty of Angelenos still disagree.

No matter which California city fortune cookies came from, it didn't take long before they were everywhere in America. During the early 20th century, Chinese cuisine grew in popularity throughout the U.S., and the cookies came along for the ride.

But, interestingly enough, fortune cookies' true inspiration doesn't come from China at all. Their story begins in another Asian country entirely.

Don't want to order takeout? Try one of these 20 Healthy Chinese Food Recipes.

From Japan, with love

Some people mistakenly think that mooncakes, which are a Chinese New Year tradition, are part of the inspiration of the fortune cookie. These cakes did contain secret messages as part of a resistance movement against the Mongolian forces in the 14th century. But today's mooncakes are message-less.

In her research, Lee spoke with food scholar Yasuko Nakamachi, who spent years traveling through Japan to trace the history of the fortune cookie to its motherland. Nakamachi identified crackers sold in bakeries on the outskirts of Kyoto, Japan as the likely inspiration for the westernized fortune cookies. In Japan, these crackers are called tsujiura senbei (fortune crackers) or omikuji senbei (written fortune crackers).

The Japanese senbei contain lines of poetry rather than fortunes and are much larger than the fortune cookies served in U.S. Chinese restaurants. They are flavored with sesame and miso instead of vanilla, and they're darker than American fortune cookies, too. Another major difference is that their messages are placed in the cookies' exterior bend, instead of being folded inside.

A series of unfortunate events

Benkyodo, which originally made the Japanese Tea Garden's fortune cookies, was the main supplier of fortune cookies in the U.S. until World War II, when Japanese Americans were sent to internment camps. As a result, Suyeichi Okamura, owner of Benkyodo, was forced to shut down his business.

Gary Ono, Okamura's grandson, still has antique hand skillets that his grandfather used to shape some of the earliest American fortune cookies.

While many Japanese bakers were interned, the Chinese started to produce their own fortune cookies, further cementing the association between the after-dinner dessert treat and China that continues today. "Although the Japanese confectioners began producing fortune cookies again after being released from the internment camps, they eventually succumbed to the now widespread fortune cookie competition," Ono explained in a 2007 blog post.

Fortune cookie production was no easy task. Confectioners would bake the fortune cookies, quickly place the fortune in the middle, and use chopsticks to fold them into their iconic shape before they cooled.

But in the late 1960s, the fortune cookie industry changed forever. Edward Louie, the owner of the Lotus Fortune Cookie Company in San Francisco, invented a machine that could insert the fortune and fold the cookie. As a result, Lotus Fortune Cookie Company could make 90,000 cookies a day. "Nobody can resist reading their fortune, no matter how corny it is," Louie said to the Chicago Tribune in 1990.

Today, most of the fortune cookies in the United States are made by Wonton Food, Inc., which has factories in Brooklyn, New York; La Vergne, Tennessee; and Houston, Texas. Each day, Wonton Food churns out a whopping four million fortune cookies.

For most of its history, Wonton Food's fortunes themselves were written by Donald Lau. "I was chosen because my English was the best of the group, not because I'm a poet," Lau told The New Yorker in 2005. "I'd be on the subway and look up at the signs and think, 'Hey, that would make a great fortune.' … I'd keep a small notebook and jot down whatever came to me." Lau told Time magazine that his fortunes had been inspired by everything from popular advice on happiness to the presidential election.6254a4d1642c605c54bf1cab17d50f1e

At one point, Lau was writing two or three fortunes a day. But by the time he retired in 2017, he wrote a few fortunes a month. "When they eat their fortune cookie, I want the customers to open the fortune, read it, maybe laugh, and leave the restaurant happy," Lau told Time. "So that they come back again next week."

Despite their popularity across Western countries, fortune cookies aren't something you'll find in China. During a 2008 TED talk, Lee showed a video of a time she brought fortune cookies with her on a trip to China.

Locals were mystified by the fortune cookies, especially when they bit into them and found a piece of paper inside. And when BuzzFeed had people in Beijing try so-called "Chinese" fortune cookies, most of them said they tasted like egg rolls. But in the U.S., at least, their popularity doesn't seem to be going away anytime soon.

And when you're not getting takeout, check out these 52 Life-Changing Kitchen Hacks That'll Make You Enjoy Cooking Again.