5 Healthiest Spices on the Planet

Wars were fought over them, best-selling pop groups were named after them and new continents were discovered in search of them. But before they were money or symbols of Girl Power, spices were medicines—healers that date back to the world's first civilizations.

The 21st century brings a new chapter to the spice world story: one of scientific exploration. Today's researchers are discovering incredible health and nutritional riches in spices. From balancing blood sugar to boosting brain power, and even promoting weight loss, here are five of the healthiest spices on the planet—plus helpful tips for making the best purchase for the ultimate healing spice rack!

How sweet it is! Dozens of studies show that people who consume cocoa–as a hot drink or eaten as dark chocolate–are in much better cardiovascular shape than those who don't. One nine-year study in the journal Circulation Heart Failure found women who ate one to two servings of high-quality chocolate per week had a 32 percent lower risk of developing heart failure than those who said no to the cocoa. And a second long-term study found that men who ate the most chocolate–about 1/3 of a cup of dark chocolate chips per week–had a 17 percent reduced risk of stroke compared to those who didn't consume chocolate. Researchers attribute cocoa's health benefits to polyphenols and flavanols, anti-inflammatory compounds that help protect the heart in a number of ways. In fact, new research shows that, gram for gram, cocoa has an even higher antioxidant capacity than fruit juice! The benefits don't stop at the heart, though. Studies have shown this sweet spice can help control inflammation-related diseases such as diabetes, liver cirrhosis, and degenerative diseases of the brain like Alzheimer's.

Get the benefits: The most healthful dark chocolate contains 74 percent or more cocoa solids, but if you're serious about a healthier heart, don't buy anything under 60 percent cacao. We like Lindt's 85% Cocoa Excellence bar. The chocolate in this bar isn't alkalized–a process that strips out the bitterness at the cost of the cocoa's natural, healthy compounds–and you can enjoy four indulgent squares for just 230 calories and 5 grams of sugar. The rule of thumb for buying cocoa: The more bitter, the better! (Chocolate is also an aphrodisiac. See more foods that increase sex drive.) 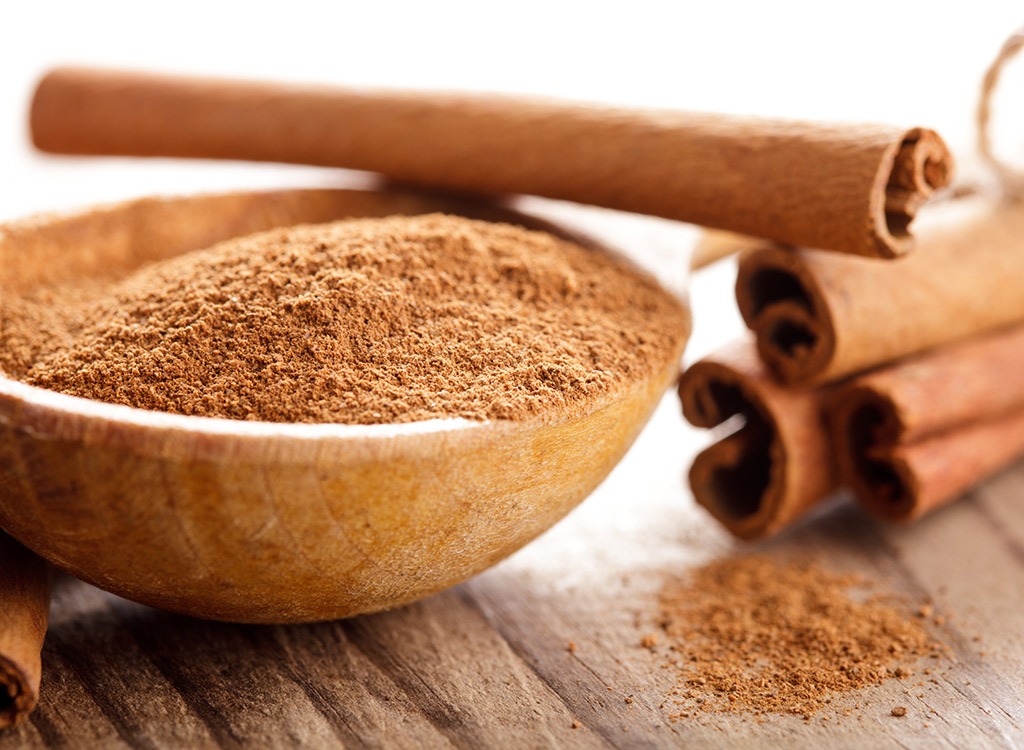 Ironically, (or perhaps nature's way of cutting us some slack) cinnamon–the warm spice that gives sugary baked goods extra flavor–can help control blood sugar and prevent against diabetes. One study found that adding a heaping teaspoon of cinnamon to a starchy meal is as effective as older generation diabetes drugs at stabilizing blood sugar and warding off insulin spikes. And a second study in the Journal of Nutrition found that when a meal contained a spice blend including cinnamon, antioxidant activity in the blood was increased by 13 percent and insulin response decreased by about 20 percent. Researchers theorize that cinnamaldehyde, cinnamon's active ingredient, works as a blood-sugar balancer by stimulating insulin receptors on cells and allowing excess sugar to move out of the blood. There are other health benefits of cinnamon: studies have shown the spice may improve cholesterol, prevent against food-borne illness, ward off the effects of Alzheimer's, and provide treatment for women with Polycystic Ovary Syndrome (PCOS).

Get the benefits: Will the real cinnamon spice please stand up? Cassia cinnamon is the variety you're most likely to find at the grocery store, but it's ceylon cinnamon, a milder, pricier variety that's touted by health experts. You can find true cinnamon online or in Indian marketplaces and spice shops. 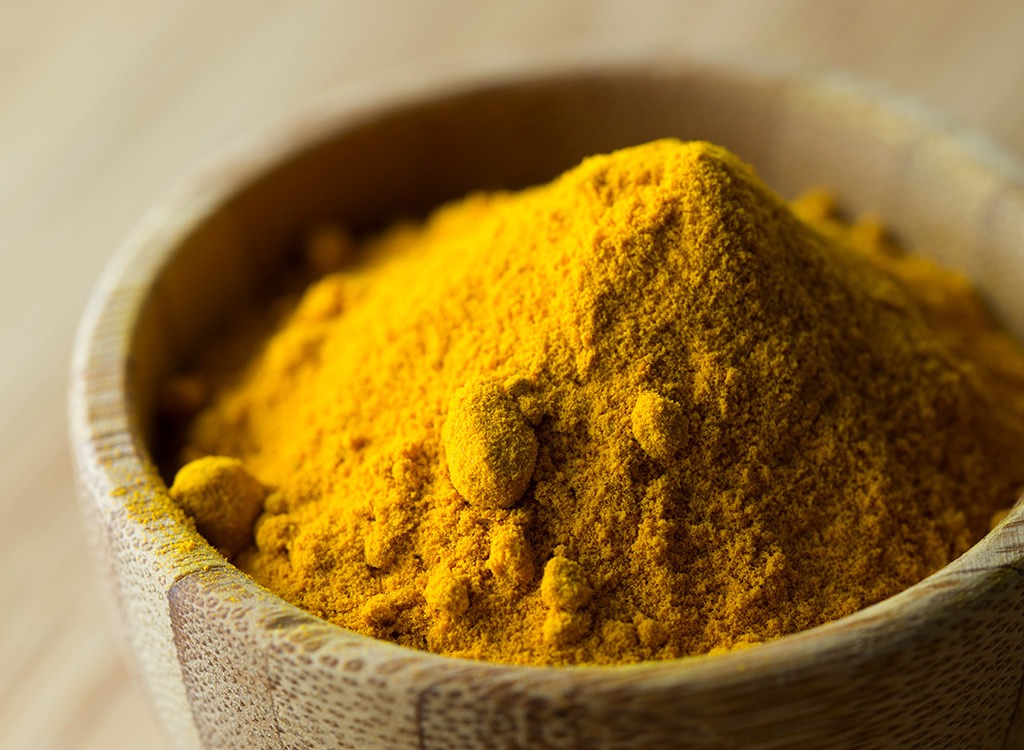 Once referred to as "Poor Man's Saffron" because of its deep yellow hue, turmeric is now touted by health experts as the "Golden Spice of Life." Traditional to Indian cooking, turmeric owes its health benefits to the active ingredient curcumin, a powerful antioxidant shown to release its anti-inflammatory goodness to almost every cell in the body, boosting the immune system and treating a host of maladies from indigestion to cancer. The most recent research shows turmeric may be an effective treatment for brain disease. One recent study found that people at risk of cognitive impairment who added one gram of turmeric to breakfast, showed significantly improved working memory after just six hours. In a separate study, Asian researchers found elderly people who ate the most turmeric-rich foods scored higher on standardized mental tests than those who rarely ate the curry spice. And there's a growing body of research into the role of curcumin in the prevention and treatment of Alzheimer's disease.

Get the benefits: Turmeric is the only edible source of curcumin, so you want to sneak it into your diet as much as possible. While the spice is typical of curries, it's not to be confused with curry powder—a blend of spices that includes turmeric. Look for turmeric from Alleppey, which has twice the curcumin than turmeric from Madras. The raw spice is rather harsh, so it's best enjoyed cooked in dishes like stir-frys and stews, or as a seasoning for meat, poultry and fish.

Used for thousands of years to tame troubled tummies and aid digestion, ginger is mentioned in Chinese medical texts from the fourth century BC! And for the past few decades, scientists have been proving ginger works at quieting that queasy feeling. One study found that ginger helped prevent and treat motion sickness by suppressing the release of vasopressin during "circular vexation," aka, spinning around in a chair. Vasopressin is a hormone that regulates levels of water, salt and blood sugar. Other research paints ginger as a powerful muscle relaxant, that helps reduce soreness brought on by exercise by as much as 25 percent, as well as banish bloat. Researchers attribute ginger's health benefits to gingerols, compounds that are antioxidant, anti-inflammatory, antibacterial—and anti-disease. In fact, studies suggest ginger may reduce symptoms of arthritis, improve cholesterol and prevent cancer.6254a4d1642c605c54bf1cab17d50f1e

Get the benefits: Fresh ginger is richest in gingerol—the compound that contributes to many of the spice's health benefits. When buying the dried spice, researchers say you'll get the most gingerol from organic varieties.

It's funny that the hottest spice in the world is called chile. And while debate over the spelling of the spice wages on—is it chile? or chilli? or chili?—researchers make no bones about the health benefits of the red-hot spice. Studies suggest chili can do everything from reducing blood pressure to clearing up sinus inflammation. But the hottest research revolves around weight loss. Fiery capsaicin, the compound that gives chiles their signature kick, has been shown to increase body heat, boost metabolic rate and decrease appetite. In fact, scientists are currently looking at turning capsaicin into an all-natural anti-obesity supplement for its ability to activate our "good," calorie-burning brown fat stores. An earlier study by Canadian researchers found that men who ate spicy appetizers consumed 200 fewer calories at later meals than those that did not. And you don't have to go crazy with the hot sauce. Researchers at Purdue University found just 1 gram of red pepper (about 1/2 a teaspoon) was enough to help manage appetite and burn more calories after a meal. Scientists say capsaicin's weight loss benefits occur at a molecular level by altering key proteins found in fat.

Get the benefits: The hotter the pepper, the more capsaicin it contains. Habanero and red cayenne chiles are among the hottest at the market. Spice rack cayenne is pure chile, ground from the long, red cayenne chili and it's also rich in capsaicin. And fiery hot! (Can't handle the heat? Research suggests you can still get a calorie-burn boost, if not all the health benefits of capsaicin, from dihydrocapsiate, a compound found in milder peppers like poblanos.) Try some on your kale.